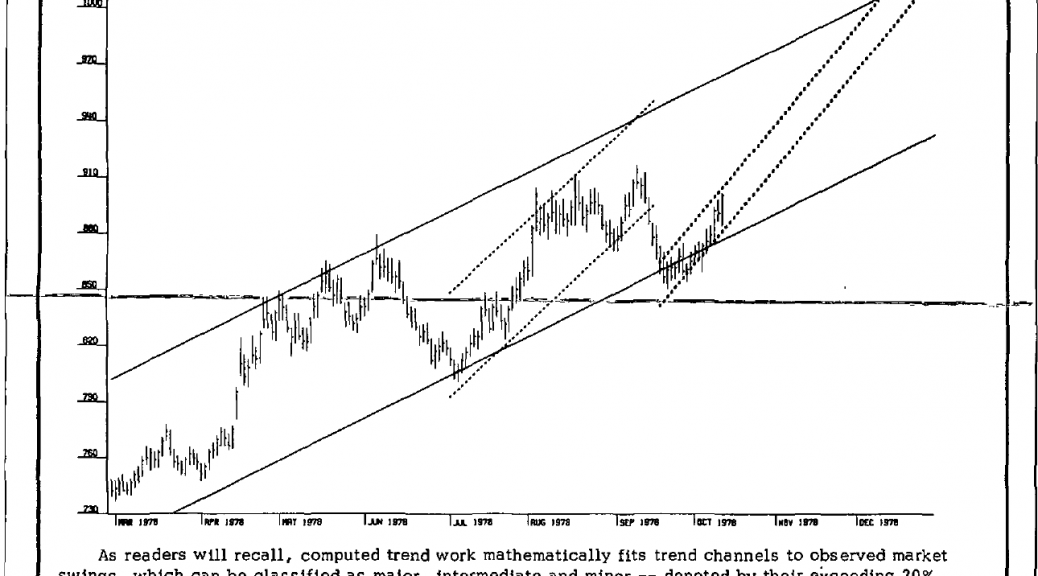 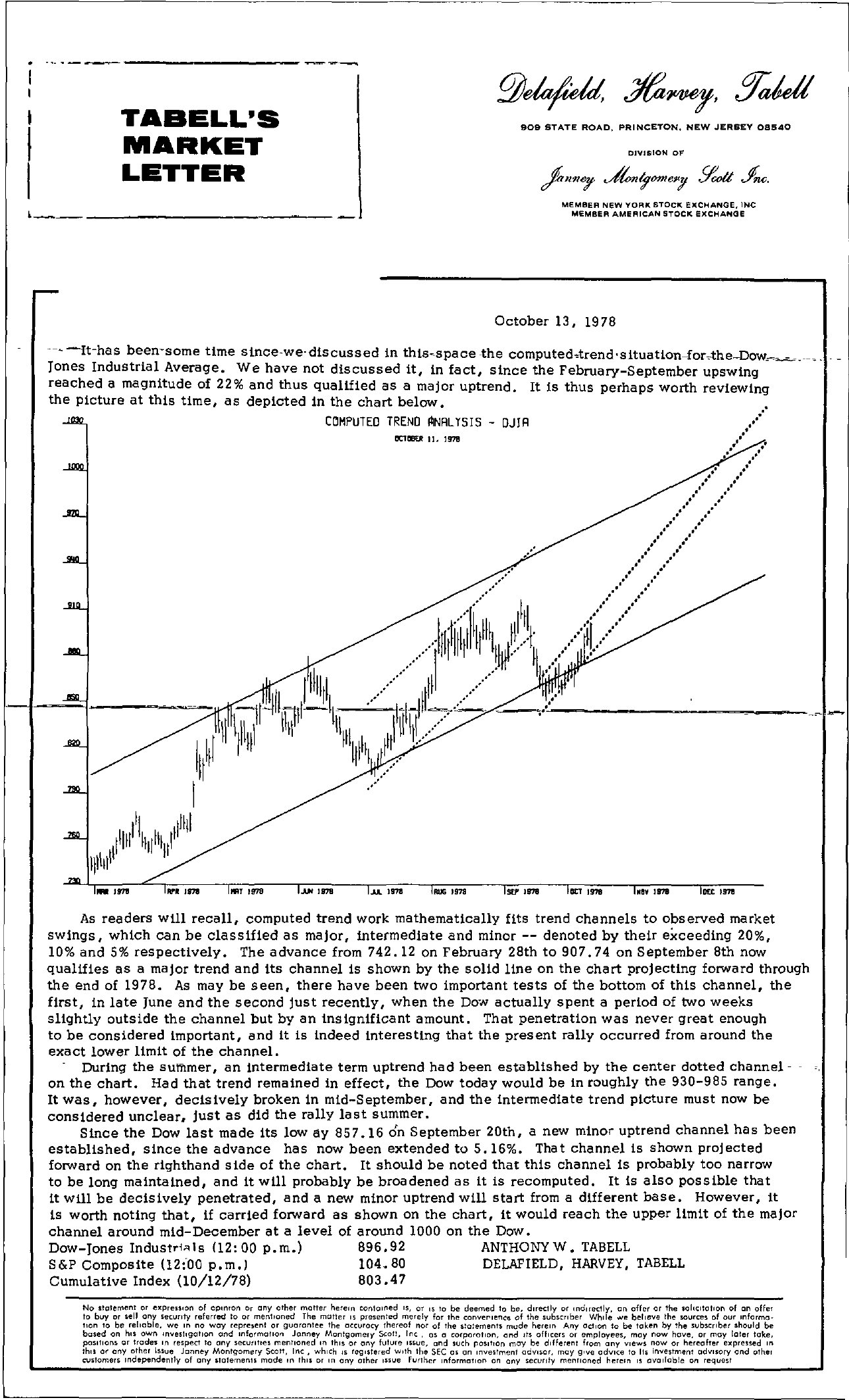 -.- I TABELL'S I MARKET I LETTER 1 – – – – – – – – – 909 STATE ROAD, PRINCETON, NEW JERSEY 08540 DIVISION OF MEMBER NEW YORK STOCK eXCHANGE, lNC MEMBER AMERICAN STOCI( eXCHANGE October 13, 1978 –, -It-has been-some time since-we-dlscussed in this-space -the Jones Industrial Average. We have not discussed it, in fact, since the February-September upswing –. — reached a magnitude of 22 and thus qualified as a major uptrend. It is thus perhaps worth reviewing the picture at this time, as depicted in the chart below. COMPUTED TREND – DJIA 1!t1&R 11. 1978 ''''' . 1m 19'78 ….. '978 ' '978 Ilt1 '98 ' rn As readers will recall, computed trend work mathematically fits trend channels to observed market swings, which can be classified as major, Intermediate and minor — denoted by their exceeding 20, 10 and 5 respectively. The advance from 742.12 on February 28th to 907.74 on September 8th now qualifies as a major trend and its channel is shown by the solid line on the chart projecting forward through the end of 1978. As may be seen, there have been two important tests of the bottom of this channel, the first, in late June and the second just recently, when the Dow actually spent a period of two weeks slightly outside the channel but by an insignificant amount. That penetration was never great enough to be considered Important, and It Is indeed interesting that the present rally occurred from around the exact lower limit of the channel. During the summer, an intermediate term uptrend had been established by the center dotted channel – on the chart. Had that trend remained in effect, the Dow today would be in roughly the 930-985 range. It was, however, decisively broken in mid-September, and the intermediate trend picture must now be conSidered unclear, just as did the rally last summer. Since the Dow last made its low ay 857.16 on September 20th, a new minor uptrend channel has been established, since the advance has now been extended to 5.16. That channel Is shown projected forward on the rlghthand side of the chart. It should be noted that this channel is probably too narrow to be long maintained, and It w1ll probably be broadened as it is recomputed. It Is also possible that it will be decisively penetrated, and a new minor uptrend will start from a different base. However, it is worth noting that, If carried forward as shown on the chart, it would reach the upper limit of the major channel around mid-December at a level of around 1000 on the Dow. DOW-Jones (12 00 p.m.) 896.92 ANTHONYW. TABELL S&P CompOSite (1200 p.m.) 104.80 DELAFIELD, HARVEY, TABELL Cumulative Index (10/12/78) 803.47 No stotement or expressIon of opInion Or any other matter herein IS, or IS 10 be deemed to be, directly or indirectly. on offer or the OIlCllollon of on offer to buy or sell any security referred to or menlfoned The matter IS presented merely for Ihe of the subScriber While we believe the wurf;eS of our Informo- han to be reliable, we In no way represent or guarantee the accuracy thereof nor 01 The statements m.lde herein Any action to be token by the subSCriber should be based on hiS own investigation and information Janney Montgomery Sea!!, Inc, 05 a corporation, and Its officers or employees, may now have, or may loter tOKe, positions or trade, In respect 10 any seCUfilies mentioned In thiS or any future Issue, ond such poslhon may be different from any views now or hereafter expressed In thiS or any other ISSue Janney Montgomery Scott, Inc, which IS registered With the SEC as on Investment adVisor, may give adVice to Its Investment adVisory and other customers Independently of any S\otemenn mode HI thiS or In any other Issue Further Information on any security mentioned herein 15 available all request