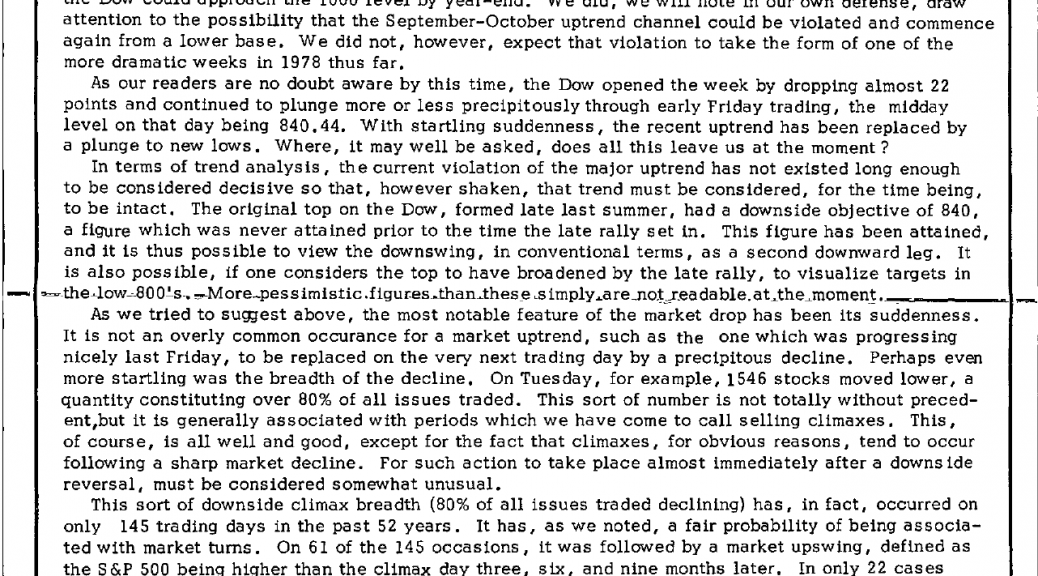 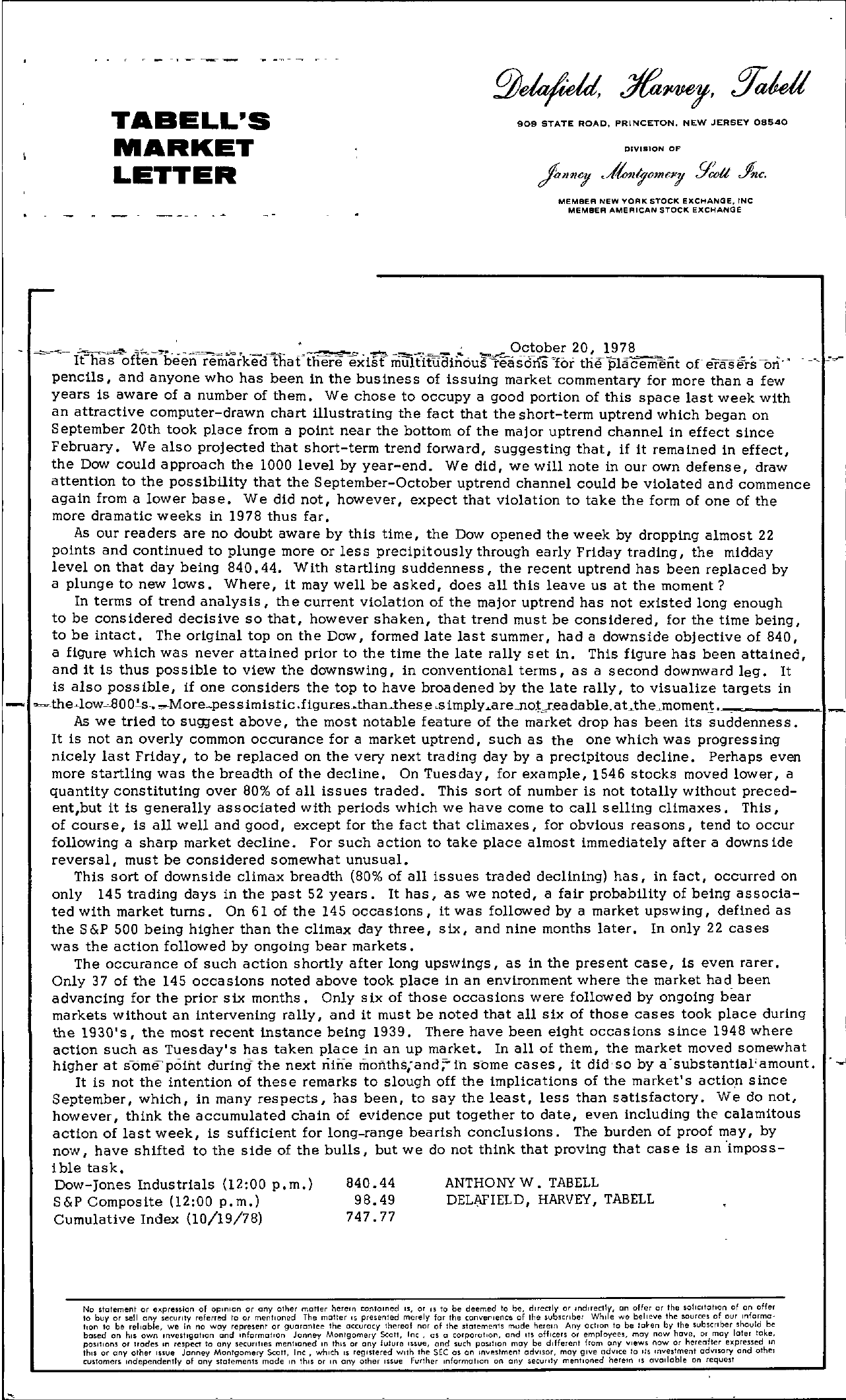 TABELL'S MARKET LETTER 909 STATE ROAD, PRINCETON. NEW JERSEY 08540 DIVISION OF MEMBER NEW VOAK STOCK EXCHANGe, tNC MEMBER AMERICAN STOCK EXCHANGE – .20 It has often been remarked that there exist multituainous reasons for the placement or erasers-on'- pencils, and anyone who has been in the business of issuing market commentary for more than a few years is aware of a number of them. We chose to occupy a good portion of this space last week with an attractive computer-drawn chart illustrating the fact that the short-term uptrend which began on September 20th took place from a pOint near the bottom of the major uptrend channel in effect since February. We also projected that short-term trend forward, suggesting that, if it remained in effect, the Dow could approach the 1000 level by year-end. We did, we will note in our own defense, draw attention to the possibility that the September-October uptrend channel could be violated and commence again from a lower base. We did not, however, expect that violation to take the form of one of the more dramatic weeks in 1978 thus far. As our readers are no doubt aware by this time, the Dow opened the week by dropping almost 22 pOints and continued to plunge more or less precipitously through early Friday trading, the midday level on that day being 840.44. With startling suddenness, the recent uptrend has been replaced by a plunge to new lows. Where, it may well be asked, does all this leave us at the moment In terms of trend analysis, the current violation of the major uptrend has not existed long enough to be considered decisive so that, however shaken, that trend must be considered, for the time being, to be intact. The original top on the Dow, formed late last summer, had a downside objective of 840, a figure which was never attained prior to the time the late rally set in. This figure has been attained, and it is thus possible to view the downswing, in conventional terms, as a second downward leg. It is also possible, if one considers the top to have broadened by the late rally, to visualize targets in . lmlstic .s imply.are.notI.ea da ble. ….,.. I As we tried to sUg;jest above, the most notable feature of the market drop has been Its suddenness. It is not an overly common occurance for a market uptrend, such as the one which was progressing nicely last Friday, to be replaced on the very next trading day by a precipitous decline. Perhaps even more startling was the breadth of the decline. On Tuesday, for example, 1546 stocks moved lower, a quantity constituting over 80 of all issues traded. This sort of number Is not totally without preced- ent,but it is generally associated with periods which we have come to call selling climaxes. This, of course, is all well and good, except for the fact that climaxes, for obvious reasons, tend to occur following a sharp market decline. For such action to take place almost immediately after a downs ide reversal, must be considered somewhat unusual. This sort of downside climax breadth (80 of all issues traded declining) has, in fact, occurred on only 145 trading days in the past 52 years. It has, as we noted, a fair probability of being associa- ted with market turns. On 61 of the 145 occasions, it was followed by a market upswing, defined as the S&P 500 being higher than the climax day three, six, and nine months later. In only 22 cases was the action followed by ongoing bear markets. The occurance of such action shortly after long upswings, as in the present case, is even rarer. Only 37 of the 145 occasions noted above took place in an environment where the market had been advancing for the prior six months. Only six of those occasions were followed by ongoing bear markets without an intervening rally, and it must be noted that all six of those cases took place during the 1930's, the most recent instance being 1939. There have been eight occasions since 1948 where action such as Tuesday's has taken place in an up market. In all of them, the market moved somewhat higher at somepoiht during-the next nine mofiths;and;-in some cases, it did'so bya-substantial'amount. It is not the intention of these remarks to slough off the implications of the market's actio,n since September, which, in many respects, has been, to say the least, less than satisfactory. We do not, however, think the accumulated chain of evidence put together to date, even Including the calamitous action of last week, Is sufficient for long-range bearish conclusions. The burden of proof may, by now, have shifted to the side of the bulls, but we do not think that proving that case is an'imposs- ible task. Dow-Jones Industrials (1200 p.m.) S&P Composite (1200 p.m.) Cumulative Index (10/19/78) 840.44 98.49 747.77 ANTHONY W. TABELL DELNIELD, HARVEY, TABELL No statement or expression of opinion or any olher maNer herein IS, or IS to be deemed to be, directly or mdtrectly, on offer or the of on offer to buy or sell any security referred to or mentIOned The matter IS presented merely for the converllence of the subscriber While we believe the saurO's of our mformo- hon to be reliable, we In no way represent or guarantee the accuracy thereof nor of the statements mude herein Any achon to be by the subSCriber should be based on hiS own investigation and .nformot,on Janney Montgomery 5011, Inc, 0 a corporation, ond Its officers or employees, may now hove, or moy later take, POSitiOns or trades In respect to any securlhes menhaned In ttliS or any future Issue, and such postllon may be different from any views now or hereafter expressed In thiS or any other Issue Janney Montgomery call, Inc, which IS registered With the SEC as on Investment adVisor, may 9've adVice to Its Investment adVisory and othel customers Independently of any statements mode In thiS or 11'1 any other Issue Further Information on any security mentioned herern IS available on request