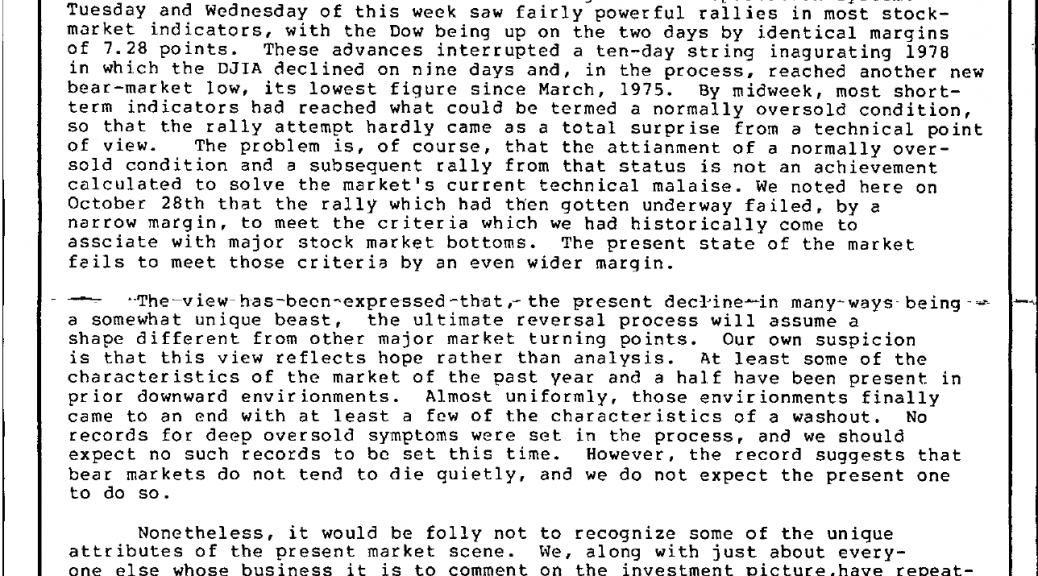 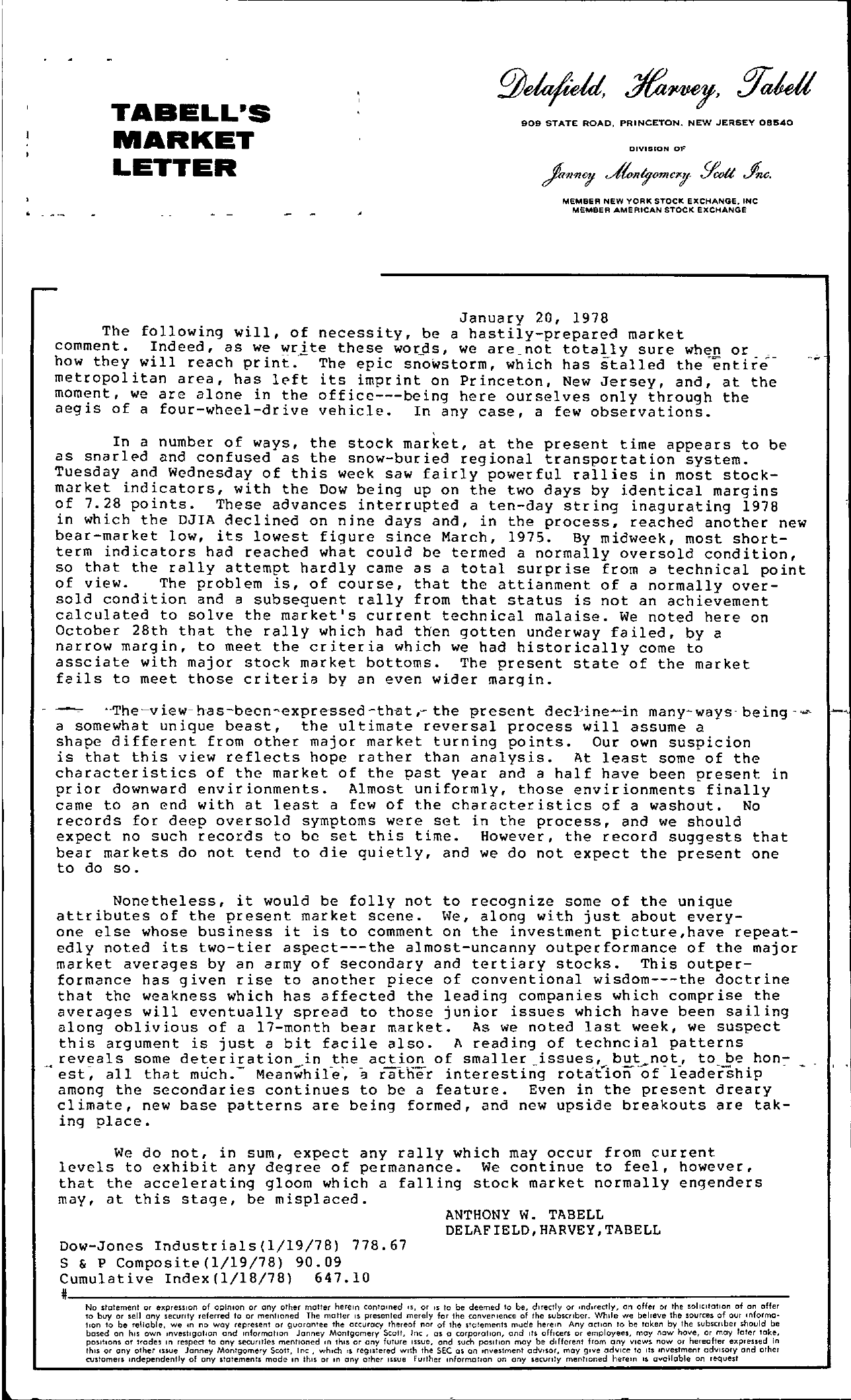 TABELL'S MARKET LETTER 909 STATE ROAD, PRINCETON. NEW JERSEY 08540 DIVISION OF MEMBER NEW YORI( STOCK eXCHANGE, INC MEMBER AMERICAN STOCK. eXCHANGE January 20, 1978 The following will, of necessity, be a hastily-prepared market comment. Indeed, as we write these words, we arenot totally sure when or how they will reach print. The epic snowstorm, which has stalled the-entiremetropolitan area, has lft its imprint on Princeton, New Jersey, and, at the moment, we are alone in the office—being here ourselves only through the aegis of a four-wheel-drive vehicle. In any case, a few observations. In a number of ways, the stock market, at the present time appears to be as snarld and confused as the snow-buried regional transportation system. Tuesday and Wednesday of this week saw fairly powerful rallies in most stockmarket indicators, with the Dow being up on the two days by identical margins of 7.28 points. These advances interrupted a ten-day string inagurating 1978 in which the DJIA declined on nine days and, in the process, reached another new bear-market low, its lowest figure since March, 1975. By midweek, most shortterm indicators had reached what could be termed a normally oversold condition, so that the rally attempt hardly came as a total surprise from a technical point of view. The problem is, of course, that the attianment of a normally oversold condition and a subsequent rally from that status is not an achievement calculated to solve the market's current technical malaise. We noted here on October 28th that the rally which had then gotten underway failed, by a narrow margin, to meet the criteria which we had historicallY come to assciate with major stock market bottoms. The present state of the market fails to meet those criteria by an even wider margin. '-Thev iew- h-as-beenexpre-ssed -th-at ,- the present decline-in manyways- being – a somewhat unique beast, the ultimate reversal process will assume a shape different from other major market turning points. Our own suspicion is that this view reflects hope rather than analysis. At least some of the characteristics of the market of the past year and a half have been present in prior downward envirionments. Almost uniformly, those envirionments finally came to an end with at least a few of the characteristics of a washout. No records for deep oversold symptoms were set in the process, and we should expect no such records to be set this time. However, the record suggests that bear markets do not tend to die quietly, and we do not expect the present one to do so. -, Nonetheless, it would be folly not to recognize some of the unique attributes of the present market scene. We, along with just about everyone else whose business it is to comment on the investment picture,have repeatedly noted its two-tier aspect—the almost-uncanny outperformance of the major market averages by an army of secondary and tertiary stocks. This outperformance has given rise to another piece of conventional wisdom—the doctrine that the weakness which has affected the leading companies which comprise the averages will eventually spread to those junior issues which have been sailing along oblivious of a 17-month bear market. As we noted last week, we suspect this argument is just a bit facile also. A reading of techncial patterns areveals some deteriration in the action of smaller issues, but not, to be hon- est all that much.- Meanwhil'e', rallier interesting rota'tionof-leadership – – among the secondaries continues to be a feature. Even in the present dreary climate, new base patterns are being formed, and new upside breakouts are taking place. We do not, in sum, expect any rally which may occur from current levels to exhibit any degree of permanance. We continue to feel, however, that the accelerating gloom which a falling stock market normally engenders may, at this stage, be misplaced. ANTHONY W. TABELL DELAFIELD,HARVEY,TABELL Dow-Jones Industrials(1/19/78) 778.67 5 & P Composite (1/19/78) 90.09 Cumulative Index (1/18/78) 647.10 —————————————————————No stotemenl Of ftxpresslon of oplmon or any other motter herein contolned 15, or IS to be deemed 10 be, directly or mdlrectly, an offer or the soliCitation of on offer to buy or sell any security referred 10 or mentIOned The moiler 1 presented merely for the converlence of the subSCriber. While we believe the sources of our Information to be reliable, we m no woy represent or guarantee the accuracy thereof nor of the statements mude herem Any action to be Token by the ubscrlber should be based on hiS own mvestlgotlon and Information Janney MonTgomery Scott, in, , as a corporation, and III officers or employees, may now have, or may loter loke, positions or trades In respect To ony securltles mentioned In th.s or any future Issue, ond such position moy be d.fferent from any views now or hereafter exprl'lned In thiS or any other Issue Janney Monlgomery Scott, Inc, wh.ch .s reglSered With the SEC as an 'nvestment adVisor, may g.ve adVice 10 11 mvestment adVisory and Olhe, customers mdependently of any statements mode ,n thiS or In any other Issue Further mformallon on any security mentioned herein IS available on request