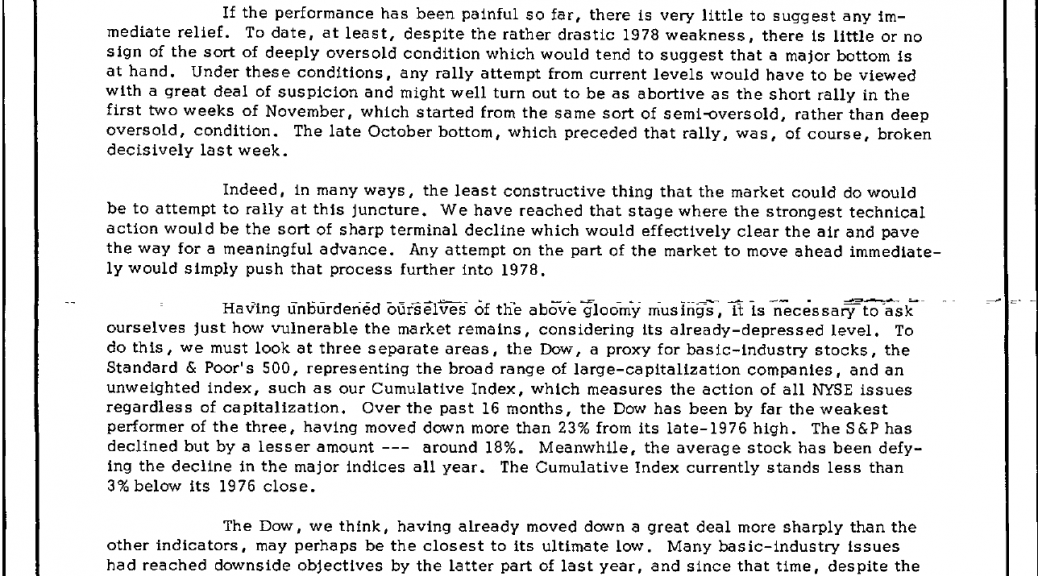 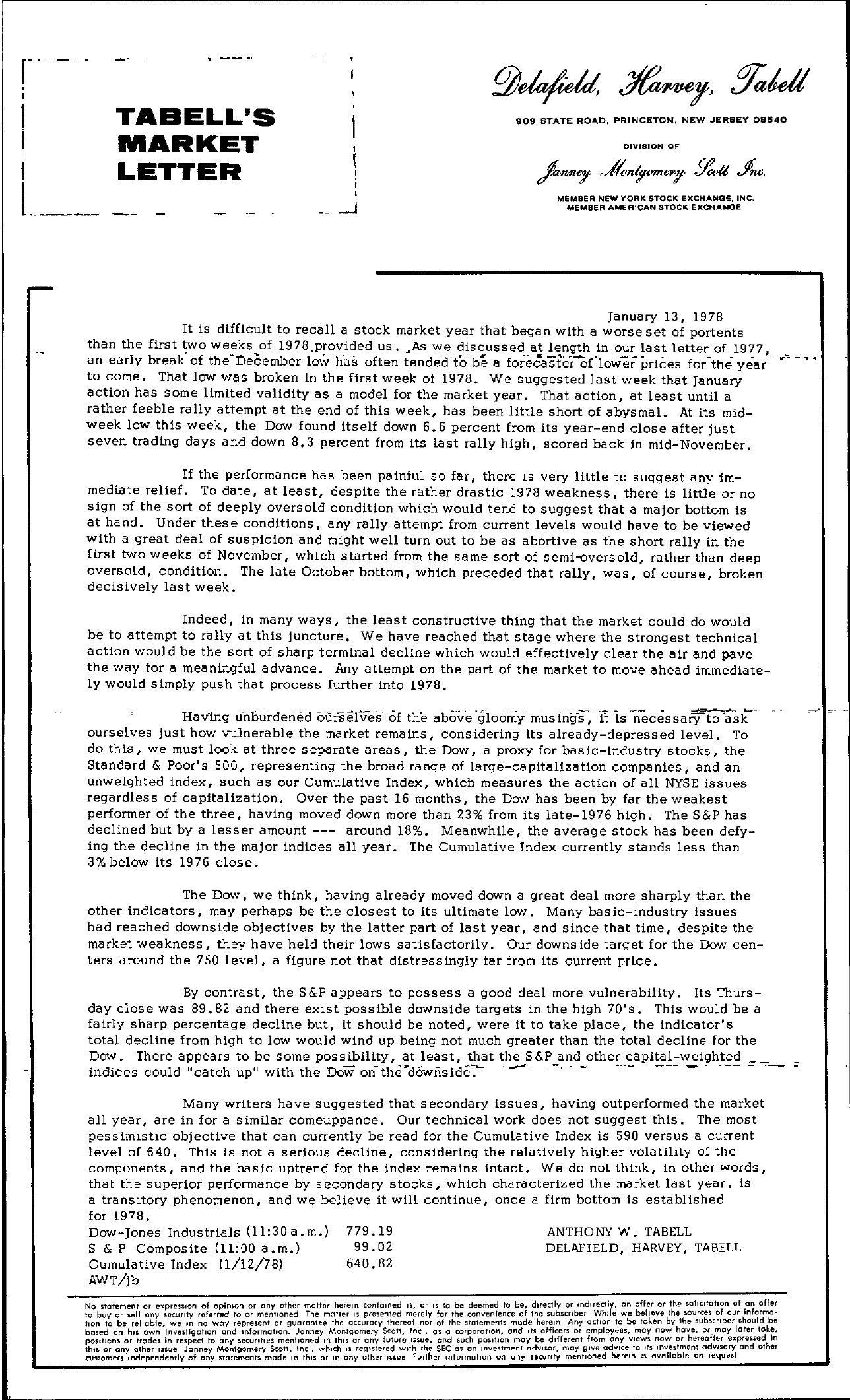 f– I TABELL'S MARKET LETTER 1 909 STATE ROAD, PRINCETON, NEW JERSEY 08540 DIVISION OF MEMBER NEW YORK STOCK EXCHANGE, INC. MEMBER AMERICAN STOCK EXCHANGE January 13, 1978 It Is difficult to recall a stock market year that began with a worse set of portents than the first t'110 weeks of 1978,provided us, ,As we discussed at length in our last letter of 1977, an early break- of the-December low-has often tended -to- be a forecasterofIower prices for-the y';ar – –. to come. That low was broken In the first week of 1978. We suggested last week that January action has some limited validity as a model for the market year. That action, at least untll a rather feeble rally attempt at the end of this week, has been little short of abysmal. At its midweek low this week, the Dow found itself down 6.6 percent from its year-end close after just seven trading days and down 8.3 percent from its last rally high, scored back in mid-November. If the performance has been painful so far, there is very little to suggest any immediate relief. To date, at least, despite the rather drastic 1978 weakness, there Is little or no sign of the sort of deeply oversold condition which would tend to suggest that a major bottom is at hand. Under these conditions, any rally attempt from current levels would have to be viewed with a great deal of suspicion and might well turn out to be as abortive as the short rally in the first two weeks of November, which started from the same sort of semi-oversold, rather than deep oversold, condition. The late October bottom, which preceded that rally, was, of course, broken decisively last week. Indeed, in many ways, the least constructive thing that the market could do would be to attempt to rally at this juncture. We have reached that stage where the strongest technical action would be the sort of sharp terminal decline which would effectively clear the air and pave the way for a meaningful advance. Any attempt on the part of the market to move ahead immediately would Simply push that process further Into 1978. Having unourderied ours elves- of tne above gloo-my musiiigs, It Is -necessa.yto -ask- ourselves just how vulnerable the market remains, considering Its already-depressed level. To do this, we must look at three separate areas, the Dow, a proxy for basiC-industry stocks, the Standard & Poor's 500, representing the broad range of large-capitalization companies, and an unwelghted Index, such as our Cumulative Index, which measures the action of all NYSE issues regardless of capitalization. Over the past 16 months, the Dow has been by far the weakest performer of the three, having moved down more than 23 from its late-1976 high. The S&P has declined but by a lesser amount — around 18. Meanwhile, the average stock has been defyIng the decline in the major indices all year. The Cumulative Index currently stands less than 3 below Its 1976 close. The Dow, we think, having already moved down a great deal more sharply than the other indicators, may perhaps be the closest to its ultimate low. Many baSiC-industry Issues had reached downside objectives by the latter part of last year, and since that time, despite the market weakness, they have held their lows satisfactorily. Our downs ide target for the Dow centers around the 750 level, a figure not that distreSSingly far from Its current price. By contrast, the S&P appears to possess a good deal more vulnerabllity. Its Thurs- day close was 89.82 and there exist possible downside targets In the high 70s. This would be a fairly sharp percentage decline but, it should be noted, were It to take place, the Indicator's total decline from high to low would wind up being not much greater than the total decline for the Dow. There appears — ——- – –Indices could catch to be some possibllity, at least, that up with the Dow on- the,,,.downside…..,….. the -,.-S&P — a -, n – d- o t h e r c a p i tal-w …-.— e i g – h.ted- – Many writers have suggested that secondary Issues, having outperformed the market all year, are In for a similar comeuppance. Our technical work does not suggest this. The most pesslmlsllc objective that can currently be read for the Cumulative Index is 590 versus a current level of 640. This Is not a serious decline, considering the relatively higher volatlhty of the components, and the basic uptrend for the index remains intact. We do not think, 1n other words I that the superior performance by secondary stocks, which characterized the market last year. Is a transitory phenomenon, and we believe it will continue, once a firm bottom is established for 1978. DOW-Jones Industrials (1130a.m.) 779.19 ANTHONY W. TABELL S & P CompOSite (1100 a.m.) 99.02 DELAFIELD, HARVEY, TABELL Cumulative Index (1/12/78) 640.82 AWT/jb No statement or cprl!slon of opinion or any other matter herein tonlalned IS, or IS 10 be deemed to be, directly or indirectly, on offer or the soliCitation of an offer to buy or sell onr. security referred to or menhoned The matter IS presented merely for the convellence of the subscriber While we believe the sources of our nfmb' lion 10 be rellab e we In no way represent or guarantee the ouracy thereof nor of the statements mlde herein Any action to be talen by the subscrtber s au e based on hiS awn'lnvestlgatlon and Infarmahon. Janney Montgomery Scott, Inc, as 0 corporation, and Its officers or employees, may now have, or may taler taki positions or trade! In respect to any secUrities mentioned m thiS or any future luue, ond such POSition may be different from any views now or hereaJter expretedh Ih.s or any ather Issue Janney Montgomery Scali, tnc, which 1 registered With the SEC oS an Investment adnsor, may give odvlCe to Its Investment a vlSoryon at er ('IJstomers independenTly of any stolements made In thiS or m ony other Issue further mfarmalton on any secvnty mentioned herem 15 available On request