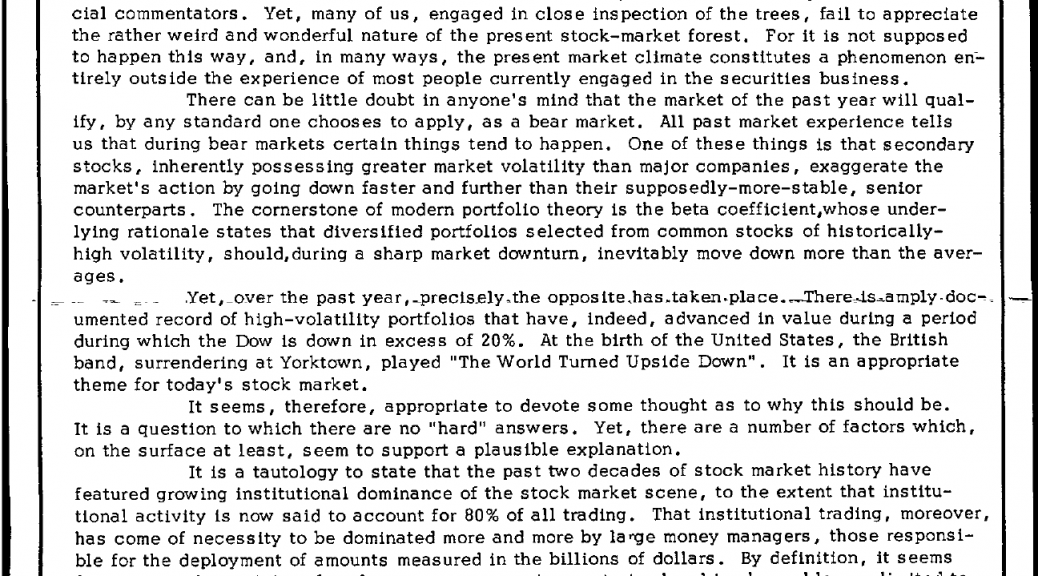 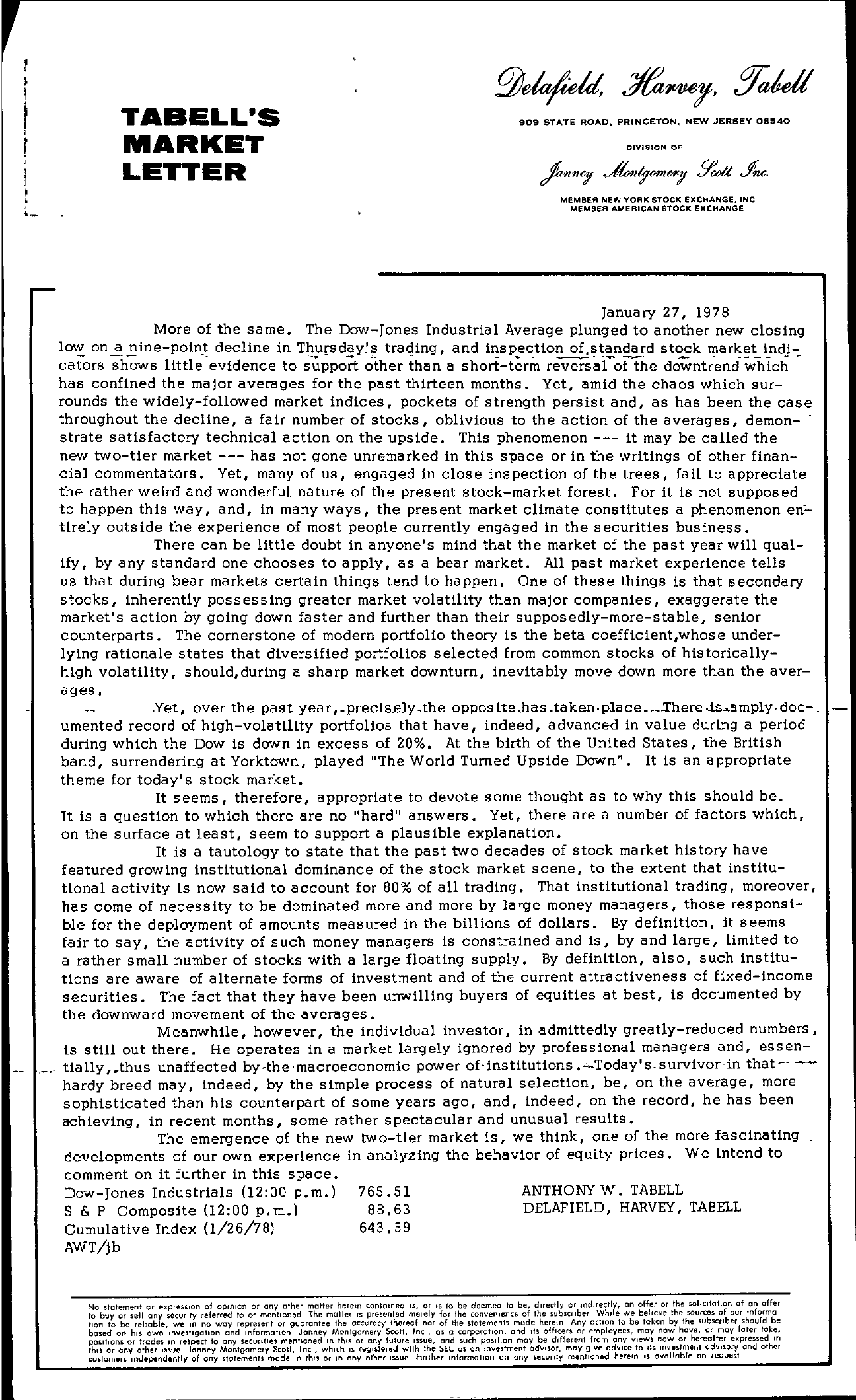 TABELL'S MARKET LETTER 909 STATE ROAD, PRINCETON, NEW JERSEY 08!!i40 DIVISION OF MEMBER NEW VORK STOCK eXCHANGE. INC MEMBER AMERICAN STOCK eXCHANGE January 27, 1978 More of the same. The Dow-Jones Industrial Average plunged to another new closing 10, onEine-point decline in Thursdays traCiing, and inspectionof,standard stock market indi- cators shows little eVidence to support other than a short-term reversalof the downtrend-which – has confined the major averages for the past thirteen months. Yet, amid the chaos which sur- rounds the widely-followed market indices, pockets of strength persist and, as has been the case throughout the decline, a fair number of stocks, obliVious to the action of the averages, demon- strate satisfactory technical action on the upside. This phenomenon — it may be called the new two-tier market — has not gone unremarked in this space or in the writings of other finan- cial commentators. Yet, many of us, engaged in close inspection of the trees, fail to appreciate the rather weird and wonderful nature of the present stock-market forest. For it is not supposed to happen this way, and, in many ways, the pres ent market climate constitutes a phenomenon en tirely outside the experience of most people currently engaged in the securities business. There can be little doubt in anyone's mind that the market of the past year will qual- ify, by any standard one chooses to apply, as a bear market. All past market experience tells us that during bear markets certain things tend to happen. One of these things is that secondary stocks, inherently possessing greater market volatility than major companies, exaggerate the market's action by going down faster and further than their supposedly-more-stable, senior counterparts. The cornerstone of modem portfolio theory is the beta coefficient,whose under- lying rationale states that diversified portfolios selected from common stocks of historically- high volatility, should,during a sharp market downturn, inevitably move down more than the aver- ages. .Yet,over the past year,precis.ely.the opposite,has.taken.place .-There,J.samplydoc- umented record of high-volatility portfolios that have, indeed, advanced in value during a period during which the Dow is down in excess of 20. At the birth of the United States, the British band, surrendering at Yorktown, played The World Turned Upside Down. lt is an appropriate theme for today's stock market. lt seems, therefore, appropriate to devote some thought as to why this should be. lt is a question to which there are no hard answers. Yet, there are a number of factors which, on the surface at least, seem to support a plausible explanation. It is a tautology to state that the past two decades of stock market history have featured growing institutional dominance of the stock market scene, to the extent that institu- tional activity is now said to account for 80 of all trading. That institutional trading, moreover, has come of necessity to be dominated more and more by la.-ge money managers, those responsi- ble for the deployment of amounts measured in the billions of dollars. By definition, it seems fair to say, the activity of such money managers is constrained and is, by and large, limited to a rather small number of stocks with a large floating supply. By definition, also, such institu- tions are aware of alternate forms of investment and of the current attractiveness of fixed-income securities. The fact that they have been unwilling buyers of equities at best, is documented by the downward movement of the averages. Meanwhile, however, the individual investor, in admittedly greatly-reduced numbers, is still out there. He operates in a market largely ignored by professional managers and, essentially,.thus unaffected by-the 'macroeconomic power of institutions Today'ssurvivorin that- – hardy breed may, indeed, by the simple process of natural selection, be, on the average, more sophisticated than his counterpart of some years ago, and, indeed, on the record, he has been achieving, in recent months, some rather spectacular and unusual results. The emergence of the new two-tier market is, we think, one of the more fascinating developments of our own experience in analyzing the behavior of equity prices. We intend to comment on it further in this space. Dow-Jones Industrials (1200 p.m.) S & P Composite (1200 p. m.) 765.51 88.63 ANTHONY W. TABELL DELAFIELD, HARVEY, TAB ELL Cumulative Index (1/26/78) 643.59 AWT/jb No statement or expression of opinion or any olher matter herem contolned IS, or IS to be deemed 10 be, directly or indirectly, an offer or the 501lclloilon of on offer to buy or sell any security referred 10 or mentioned The matter IS presented merely for the converlenCI! of the subSCriber While I! believe the sources of our ,forma lion to be reliable, we In no way represent or guarantee the accuracy thereof nor of the statements mude herein Any action to be token by Ihe subSCriber should be based on hiS own investigation and information Janney Montgomery Scol!, Inc, as a corporation, and Its officers or employees, may now have, or may later toke, pOSitions or trades In respect to any seCUrities menlloned In thiS or any future Issue, and such posllion may be different from any views now or hereafter expressed 11'1 Ihls or any other Inue Janney Montgomery Sc.ott, Inc., which IS registered with the SEC 0 on mvestment adVisor, may give adVICe to lIs Investment adVISOry and othel customers Independently of any statements mode In thl or In any oiher Issue fuher II'Iformatlon on any security mentioned herein IS available on request