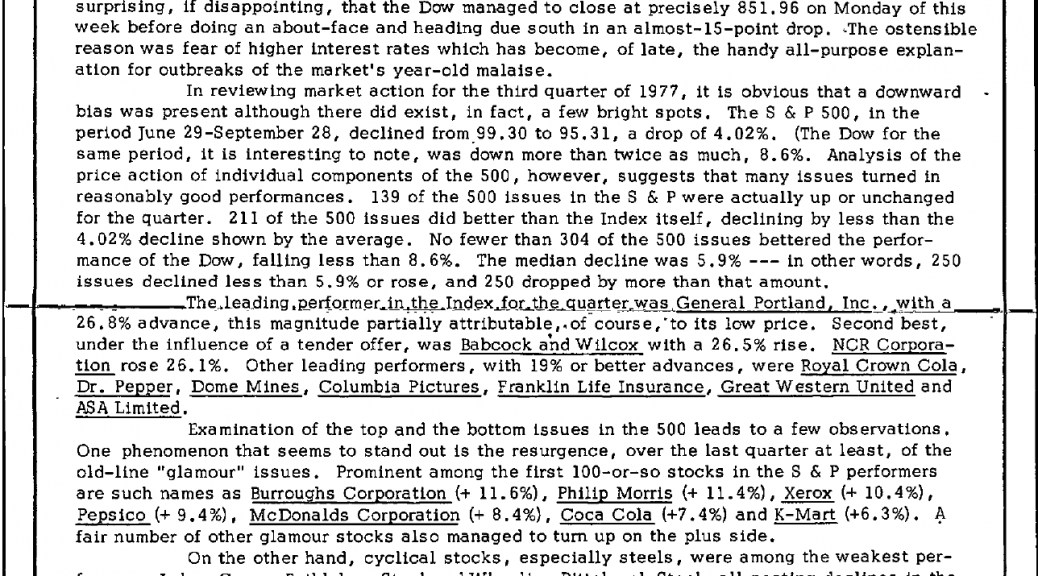 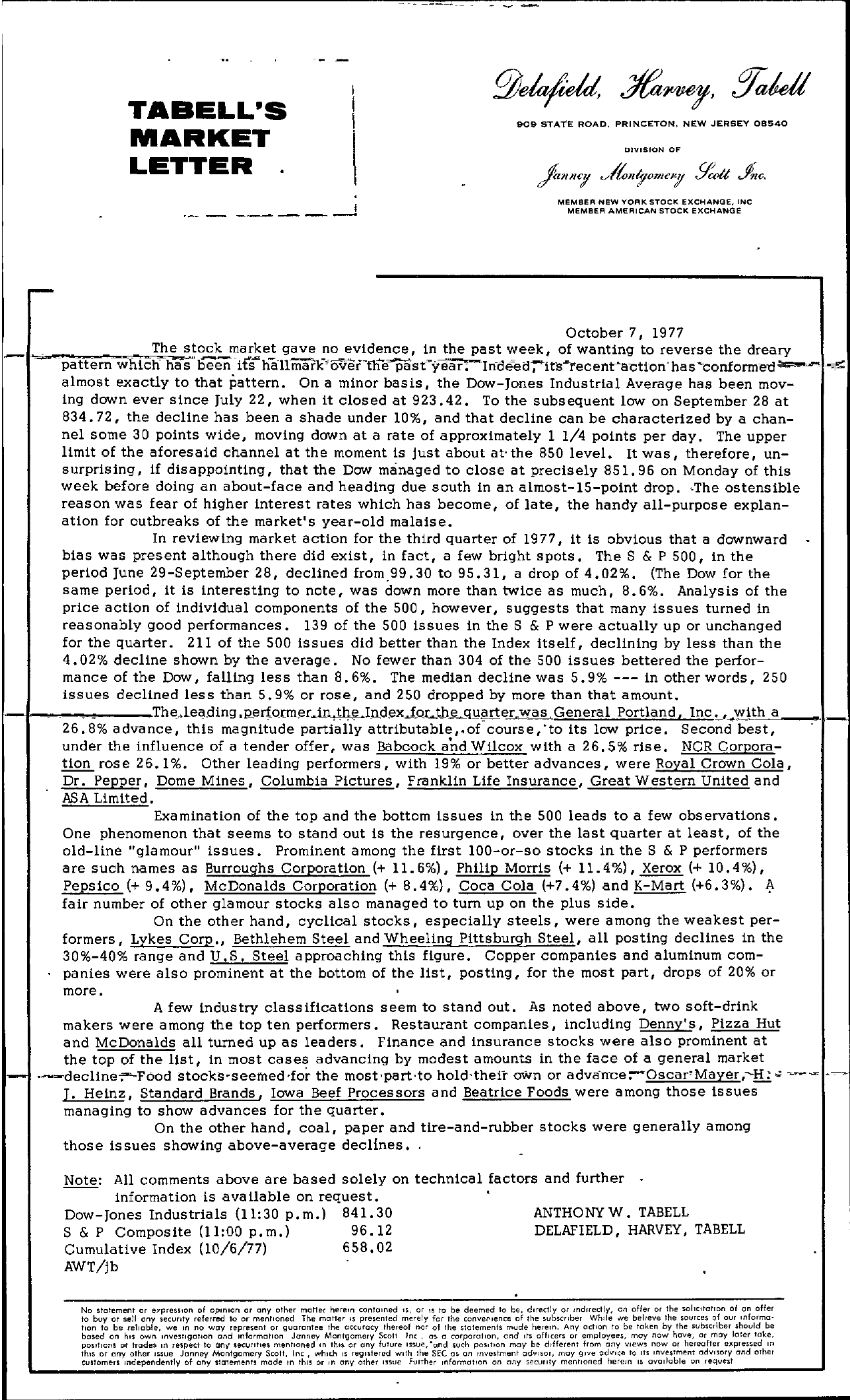 TABELL'S MARKET LETTER – – – – – -; 909 STATE ROAD, PRINCETON, NEW JERSEY 08540 DIVISION OF MEMBER NEW YORK STOCK EXCHANGE, INC MEMBER AMERICAN STOCK EXCHANGE – October 7, 1977 ;''1c-CT;;he;…s.tock market gave no evidence, in the past week, of wanting to reverse the dreary …;., pattern which has been itShalliiiaJ'overtnepasCyear; Inaeed;-itsrecentaCtion-hasconformeu almost exactly to that pattern. On a minor basis, the Dow-Jones Industrial Average has been moving down ever since July 22, when it closed at 923.42. To the subsequent low on September 28 at 834.72, the decline has been a shade under 10, and that decline can be characterized by a channel some 30 pOints wide, moving down at a rate of approximately 1 1/4 points per day. The upper limit of the aforesaid channel at the moment is just about at- the 850 level. It was, therefore, unsurprising, if disappointing, that the Dow managed to close at precisely 851.96 on Monday of this week before doing an about-face and heading due south in an almost-IS-point drop. ,The ostensible reason was fear of higher interest rates which has become, of late, the handy all-purpose explanation for outbreaks of the market's year-old malaise. In reviewing market action for the third quarter of 1977, it is obvious that a downward . bias was present although there did exist, in fact, a few bright spots. The S & P 500, in the period June 29-September 28, declined from99.30 to 95.31, a drop of 4.02. (The Dow for the same period, it is interesting to note, was down more than twice as much, 8.6. Analysis of the price action of individual components of the 500, however, suggests that many issues turned in reasonably good performances. 139 of the 500 issues in the S & P were actually up or unchanged for the quarter. 211 of the 500 issues did better than the Index itself, declining by less than the 4.02 decline shown by the average. No fewer than 304 of the 500 issues bettered the performance of the Dow, falling less than 8.6. The median decline was 5.9 — in other words, 250 issues declined less than 5.9 or rose, and 250 dropped by more than that amount. I- ….. The,leading &enQ(mef-iIl the I!ldextQt..tbl'qlrter was General Portland, Inc. ,w,.!'it,h'.'a- I 26.8 advance, this magnitude partially attributable,.of course,'to its low price. Second best, under the influence of a tender offer, was Babcock and Wilcox with a 26,5 rise. NCR Corporation rose 26.1. Other leading performers, with 19 or better advances, were Royal Crown Cola, Dr. Pepper, Dome Mines, Columbia Pictures, Franklin Life Insurance, Great Western United and ABA Limited. Examination of the top and the bottom issues in the 500 leads to a few observations. One phenomenon that seems to stand out is the resurgence, over the last quarter at least, of the old-line glamour issues. Prominent among the first 100-or-so stocks in the S & P performers are such names as Burroughs Corporation ( 11. 6). Philip Morris ( 11.4), Xerox ( 10.4), PepSico ( 9.4), McDonalds Corporation ( 8,4), Coca Cola (7.4) and K-Mart (6.3). fair number of other glamour stocks also managed to turn up on the plus side. On the other hand, cyclical stocks, especially steels, were among the weakest performers, Lykes Corp., Bethlehem Steel and Wheeling Pittsburgh Steel, all posting declines in the 30-40 range and U.S, Steel approaching this figure. Copper companies and aluminum companies were also prominent at the bottom of the list, posting, for the most part, drops of 20 or more. A few industry classifications seem to stand out. As noted above, two soft-drink makers were among the top ten performers. Restaurant companies, including Denny's, Pizza Hut and McDonalds all turned up as leaders. Finance and insurance stocks were also prominent at the top of the list, in most cases advancing by modest amounts in the face of a general market 1- –decline–Food stocks-seetned'for the most'part-to hold-their own or advance;-Oscar'Mayer,-H; – o J. Heinz, Standard Brands, Iowa Beef Processors and Beatrice Foods were among those issues managing to show advances for the quarter. On the other hand, coal, paper and tire-and-rubber stocks were generally among thos e is sues showing above-average declines . Note All comments above are based solely on technical factors and further . information is available on request. Dow- Jones Industrials (II 30 p. m.) 841. 30 ANTHONY W. TABELL S & P Composite (1100 p.m.) 96.12 DELAFIELD, HARVEY, TABELL Cumulative Index (10/6/77) 658.02 AWT/jb No statement Of e,..preslon of opinion or any other motler herem contolned IS, or IS to be deemed to be, dIrectly or Indrrectly, on offer or the sailellarlon of on offer to buy or sell ony security referred to or mentioned The matter .s presented merely for the conver'lence of the subSCriber While we believe the sources of our .nforma' tlon to be rellab!e, we In no way represent or guarantee the accurocy thereof nor of the statements mude herem. Any oct.on to be token by the subscriber shov!d be bosed on h. own mvestlgatlon and Infarmatlon Janney Montgomery Scoll Inc, as a corporat.on, and .ts officers or employees, may now have, or moy !ater toke, POSitions or trades m respect to tiny seCUrities mentioned In thiS or any future Issue, 'and such POSition may be different from any Views now or hereafter e.pressed Ifl thiS or any other Issue Janney Montgomery Scali, !nc, whICh IS registered With the SEC as on Investment odvlsor, may 91ve adVICe to ItS Investment adVisory and other customers mdependently of any slolemenl mode III thiS or III any other Issue further Information on any security mentioned herem IS avoilab!e on request