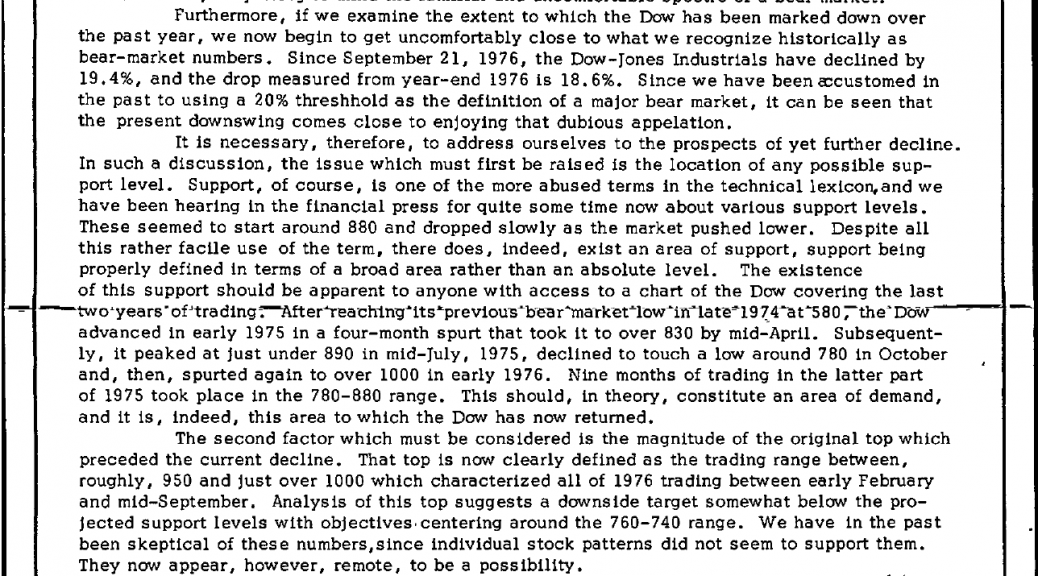 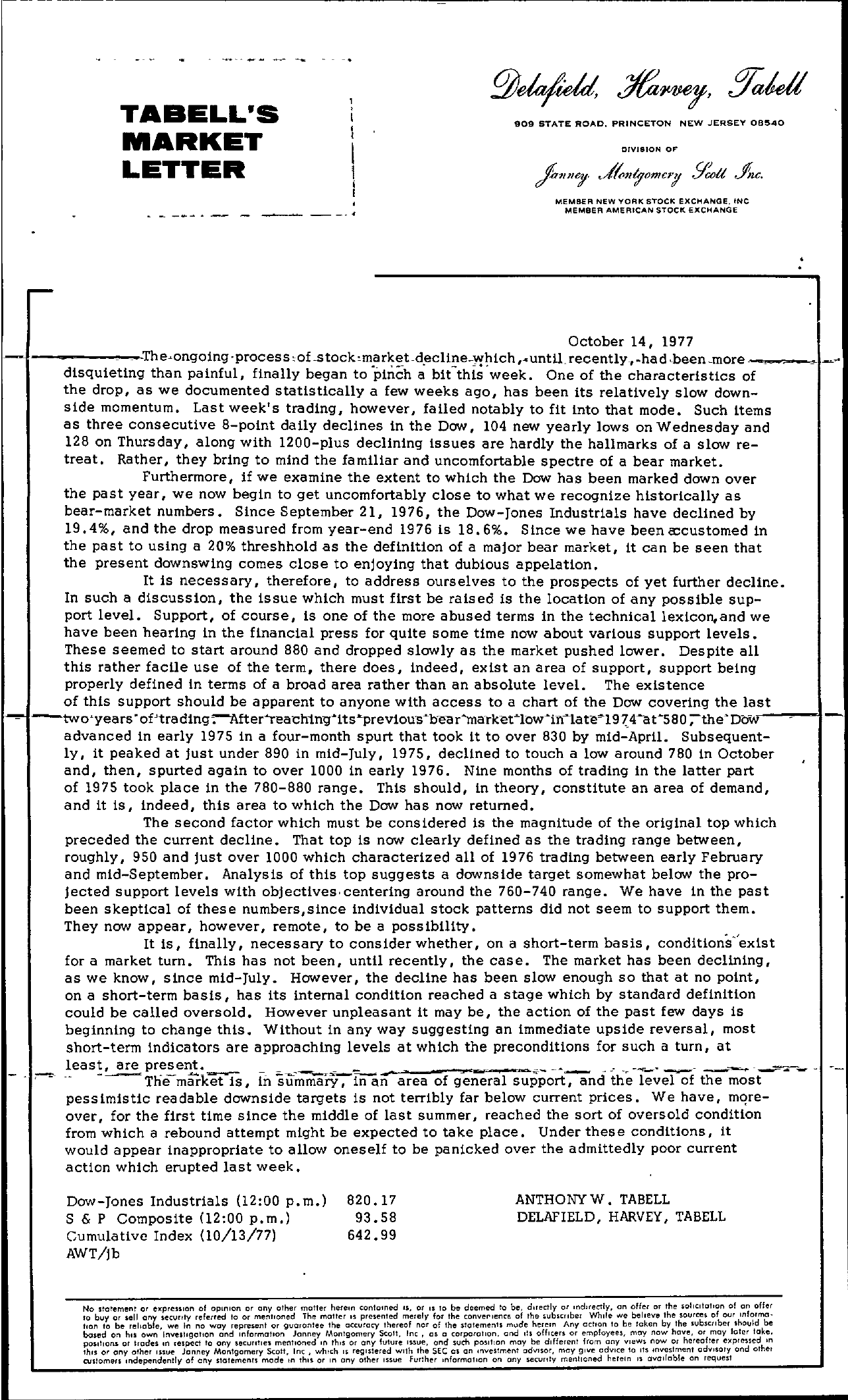 ————————————————————————————————————. TABELL'S MARKET LETTER ,, I ! I I I 909 STATE ROAD, PRINCETON NEW JERSEY 08540 DIVISION OF MEMBER NEW YORK STOCK EXCHANGE, INC MEMBER AMERICAN STOCK EXCHANGE -I October 14, 1977 I – – t – – – – -… –Th eongoing process ,of stock -rna rket -d.ecline-Y'hich until. recently., .ha d cbeen .more -' I disquieting than painful, finally began to 'pinch a bitthi-week. One of the characteristics of the drop, as we documented statistically a few weeks ago, has been its relatively slow down- side momentum. Last week's trading, however, failed notably to fit into that mode. Such items as three consecutive 8-point daily declines in the Dow, 104 new yearly lows on Wednesday and 128 on Thursday, along with 1200-plus declining issues are hardly the hallmarks of a slow re- treat. Rather, they bring to mind the familiar and uncomfortable spectre of a bear market. Furthermore, if we examine the extent to which the Dow has been marked down over the past year, we now begin to get uncomfortably close to what we recognize historically as bear-market numbers. Since September 21, 1976, the Dow-Tones Industrials have declined by 19.4, and the drop measured from year-end 1976 is 18.6. Since we have beenacustomed in the past to using a 20 threshhold as the definition of a major bear market, it can be seen that the present downswing comes close to enjoying that dubious appelation. It is necessary, therefore, to address ourselves to the prospects of yet further decline. In such a discussion, the issue which must first be raised is the location of any possible sup- port level. Support, of course, is one of the more abused terms in the technical lexicon, and we have been hearing in the financial press for quite some time now about various support levels. These seemed to start around 880 and dropped slowly as the market pushed lower. Despite all this rather facile use of the term, there does, indeed, exist an area of support, support being properly defined in terms of a broad area rather than an absolute level. The existence of this support should be apparent to anyone with access to a chart of the Dow covering the last — -two-years' oftra ding!Afterreach1ng'itskpreviouslYear'marketlowill.late19'Z4i!tS80 ;-the' Dow.–,…..-I advanced in early 1975 in a four-month spurt that took it to over 830 by mid-April. Subsequent- ly, it peaked at just under 890 in mid-Tuly, 1975, declined to touch a low around 780 in October and, then, spurted again to over 1000 in early 1976. Nine months of trading in the latter part of 1975 took place in the 780-880 range. This should, in theory, constitute an area of demand, and it is, indeed, this area to which the Dow has now returned. The second factor which must be considered is the magnitude of the original top which preceded the current decline. That top is now clearly defined as the trading range between, roughly, 950 and just over 1000 which characterized all of 1976 trading between early February and mid-September. Analysis of this top suggests a downside target somewhat below the pro- jected support levels with objectives. centering around the 760-740 range. We have in the past been skeptical of these numbers,since individual stock patterns did not seem to support them. They now appear, however, remote, to be a possibility. It is, finally, necessary to consider whether, on a short-term baSiS, condltions(exlst for a market turn. This has not been, until recently, the case. The market has been declining, as we know, since mld-Tuly. However, the decline has been slow enough so that at no point, on a short-term basis, has its internal condition reached a stage which by standard definition could be called oversold. However unpleasant it may be, the action of the past few days is beginning to change this. Without in any way suggesting an immediate upside reversal, most short-term indicators are approaching levels at which the preconditions for such a turn, at anleast, are presenL – Tlie-marketTs, in surWrY'7in … ……….-. – ' area of general support, and the level of the most pessimistic readable downside targets is not terribly far below current prices. We have, mqre- over, for the first time since the middle of last summer, reached the sort of oversold condition from which a rebound attempt might be expected to take place. Under these conditions, it would appear Inappropriate to allow oneself to be panicked over the admittedly poor current action which erupted last week. Dow-Tones Industrials (1200 p. m.) S & P Composite (1200 p.m.) Cumulative Index (10/13/77) AWT/jb 820.17 93.58 642.99 ANTHONYW. TABELL DELAFIELD, HARVEY, TABELL No statement or expression of opinion or any other maHer herem contained 15, or IS 10 be deemed to be, directly or ,ndirectly, an offer or the 50licltollon of on offer to buy or sell anr, security referred to or mentioned The matter IS presented merely for the convel'lenC!I of the subscriber While we beheve Ihe sources of our Informahan to be rehab e, we In no way represent or guarantee the accuracy thereof nor of the statements mude herem Any acllon to be token by the subscriber should be based on hIS own Inveshgal10n and Informallon Janney Monlgomery Sc01l, Inc, 0 0 corporotlon, and 11 officers or employees, may now have, or mcy loler toke, POSitions or trades In respect to any seCUrities menhoned In thiS or any future Issue, cnd such poslhon may be dlfferenl from any views now or hereafter exprCSed m thrs or any other ruue Janney Montgomery Scott, Inc, whIch IS registered wllh the SEC os on rnve51ment adVIsor, may give adVice 10 Its rnvestment adVisory and othel Clltomers independently of ony stolements made in thiS or m cny other Issue Further mformol1on on ony securrty mentioned herein IS OVOllab!e on request