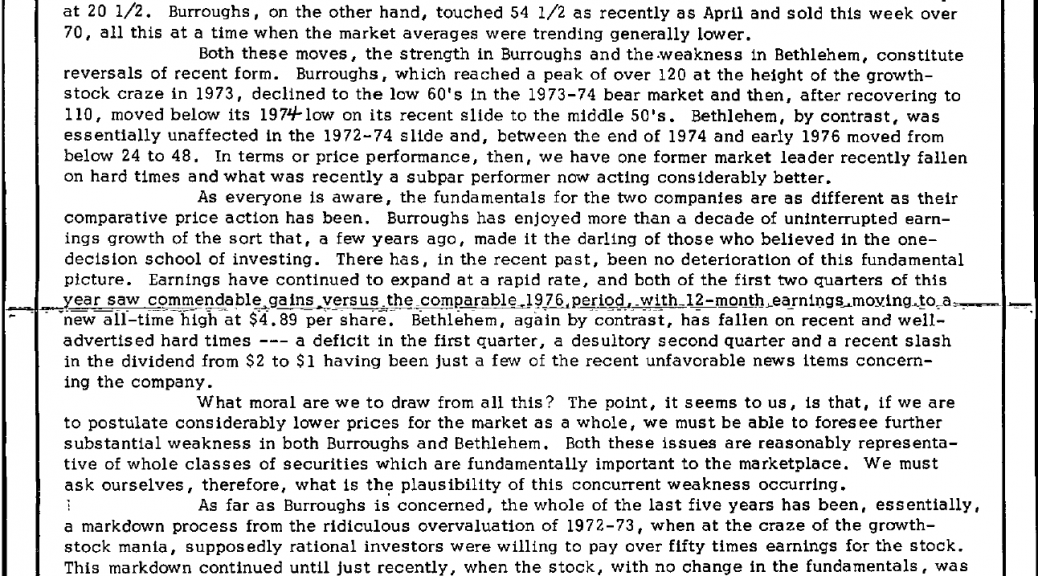 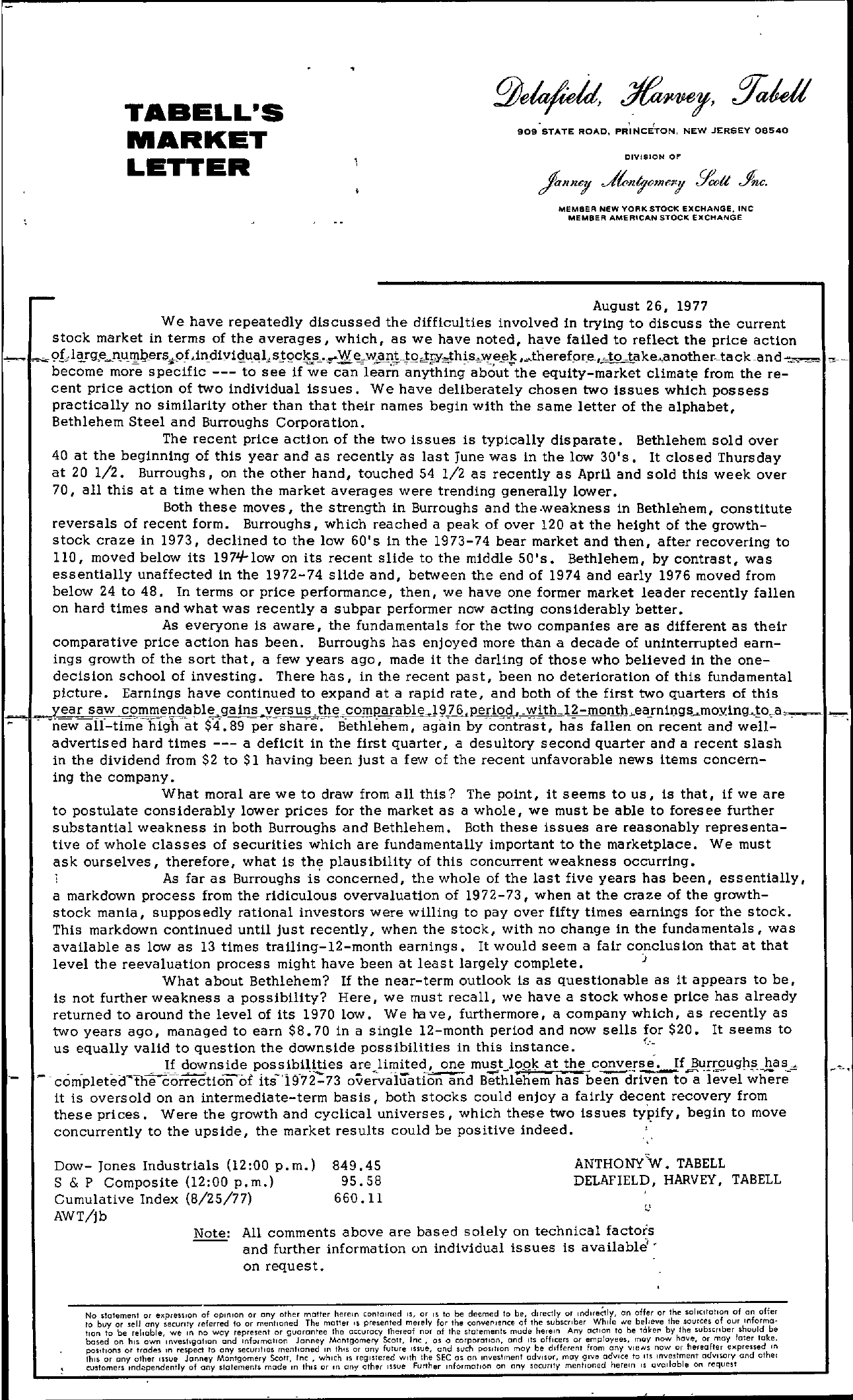 TABELL'S MARKET LETTER ,, 909 STATE ROAD, PRINCETON, NEW JERSEY 08540 DIVISION OF MEMBER NEW YORK STOCK EXCHANGE, INC MEMBER AMERICAN STOCK eXCHANGE August 26, 1977 We have repeatedly discussed the difficulties involved in trying to discuss the current stock market in terms of the averages, which, as we have noted, have failed to reflect the price action -…. 9 l'l..rg,equ'!ll;,-ersofLin,divigu!l; sjQc!ss.Yw,Q J!his,,el-l ,tlierefpre,,,Jota ke,another-ta c k ,a n d '- become more specific — to see if we can learn anything about the equity-market cl1mat from the re- cent price action of two individual issues. We have deliberately chosen two issues which possess practically no similarity other than that their names begin with the same letter of the alphabet, Bethlehem Steel and Burroughs Corporation. The recent price action of the two issues is typically disparate. Bethlehem sold over 40 at the beginning of this year and as recently as last June was in the low 30's. It closed Thursday at 20 1/2. Burroughs, on the other hand, touched 54 1/2 as recently as April and sold this week over 70, all this at a time when the market averages were trending generally lower. Both these moves, the strength in Burroughs and the.weakness in Bethlehem, constitute reversals of recent form. Burroughs, which reached a peak of over 120 at the height of the growth- stock craze in 1973, declined to the low 60's in the 1973-74 bear market and then, after recovering to 110, moved below its 197iJ-low on its recent slide to the middle 50's. Bethlehem, by contrast, was essentially unaffected in the 1972-74 slide and, between the end of 1974 and early 1976 moved from below 24 to 48. In terms or price performance, then, we have one former market leader recently fallen on hard times and what was recently a subpar performer now acting considerably better. As everyone is aware, the fundamentals for the two companies are as different as their comparative price action has been. Burroughs has enjoyed more than a decade of uninterrupted earn- ings growth of the sort that, a few years ago, made it the darling of those who believed in the one- decision school of investing. There has, in the recent past, been no deterioration of this fundamental picture. Earnings have continued to expand at a rapid rate, and both of the first two quarters of this 0;;I – year -new asialw-timcoemmhelgnhda'abtl4g.a8i9nspevresrhsaursetheBceotmhRleahreambl,ealga1in.Rbeyr'clOodll,i,;w'asitt,h 12-mol1lbearningsmoYlngtoa has fallen recent and we'll' – . advertised hard times — a deficit in the first quarter, a desultory second quarter and a recent slash in the dividend from 2 to 1 having been just a few of the recent unfavorable news items concern- ing the company. What moral are we to draw from all this The pOint, it seems to us, is that, if we are to postulate considerably lower prices for the market as a whole, we must be able to foresee further substantial weakness in both Burroughs and Bethlehem. Both these issues are reasonably representa- tive of whole classes of securities which are fundamentally important to the marketplace. We must ask ourselves, therefore, what is th plausibility of this concurrent weakness occurring. As far as Burroughs is concerned, the whole of the last five years has been, essentially, a markdown process from the ridiculous overvaluation of 1972-73, when at the craze of the growth- stock mania, supposedly rational investors were willing to pay over fifty times earnings for the stock. This markdown continued until just recently, when the stock, with no change in the fundamentals, was available as low as 13 times trailing-12-month earnings. It would seem a fair conclusion that at that level the reevaluation proces s might have been at leas t largely complete. 1 What about Bethlehem If the near-term outlook is as questionable as it appears to be, is not further weakness a possibility Here, we must recall, we have a stock whose price has already returned to around the level of its 1970 low. We have, furthermore, a company which, as recently as two years ago, managed to earn 8.70 in a single 12-month period and now sells for 20. It seems to us equally valid to question the downside possibilities in this Instance. ,–, ,If downside possibilities are.limited., one mustloQk at the c!f.J!u!r2-ugh-.h.as, -ccimpleteathe correctional' its-'19-72'73 overvaluatiOilai1d Bethlehem has been driven to a level where it is oversold on an intermediate-term basis, both stocks could enjoy a fairly decent recovery from these prices. Were the growth and cyclical universes, which these two issues tYify, begin to move concurrently to the upside, the market results could be positive indeed. Dow- Jones Industrials (12 00 p. m.) 849.45 S & P Composite (1200 p. m.) 95.58 ANTHONYW. TABELL DELAFIELD, HARVEY, TABELL Cumulative Index (8/25/77) AWT/jb 660.11 C' Note All comments above are based solely on technical factors and further information un individual issues is available' . on request. No statement or e)(preSlon of opinIOn or ony other matter herein contained IS, or IS to be deemed to be, directly or Indirectly, on oHer or the SOllcltotlOn of on offer to bvy or sell any security referred 10 or mentioned The matter IS presented merely for the converlenc of the subSCriber While He believe the sources of our Information to be reliable, we In no way represent or guarantee the accuracy thereof nor of the statements mude herein Any action to be tc\l-el' by the subSCriber should be based on hiS own investigation and Information Jonney Montgomery SCOIl, Inc, as a corporation, and Its officers or employees, moy now have, or may later toke, POSitions or trades In respect to any seCUrities mentioned In thiS or any future Issue, and such position may be different from ony VieNS now or hereafter expressed In lhls or any other Issue Janney Montgomery Scott, Inc, which IS registered With the SEC as on Investment adVisor, may give adVice to Its Investment adVisory and othel customers IndpendentJy of any statements mode In thiS or If! any other Issue Further information on any secuflly mentioned herein IS available on request