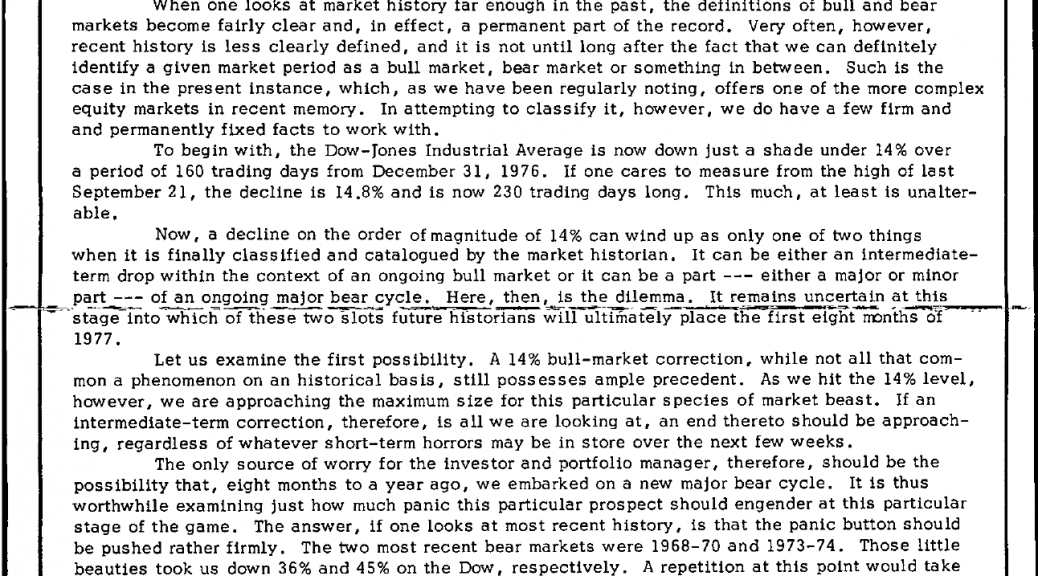 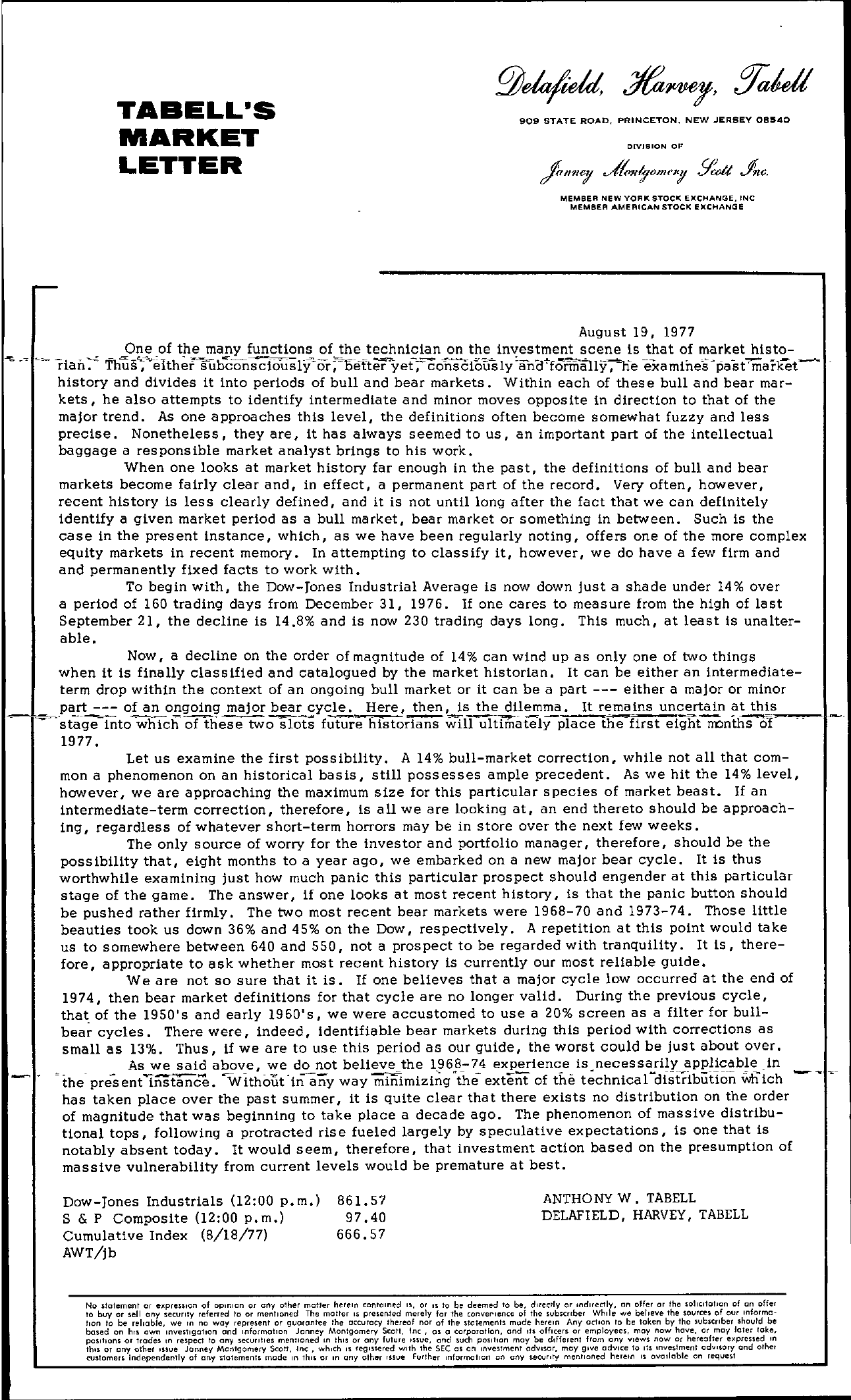 TABELL'S MARKET LETTER 909 STATE ROAD, PRINCETON, NEW JERSEY OB540 DIVISION OF MEMBER NEW VOAK STOCK EXCHANGE, INC MEMBER AMERICAN STOCK EXCHANGE August 19, 1977 One of the many functions of the technician on the investment scene is that of market histo',' – riail fhus;-eIther subconscfously'or15efteryet;-c01isciouslyCan(nonnBlIY7he examiilespast'iiiarKet history and divides it into periods of bull and bear markets. Within each of these bull and bear mar- kets, he also attempts to identify intermediate and minor moves opposite in direction to that of the major trend. As one approaches this level, the definitions often become somewhat fuzzy and less precise. Nonetheless, they are, it has always seemed to us, an important part of the intellectual baggage a responsible market analyst brings to his work. When one looks at market history far enough in the past, the definitions of bull and bear markets become fairly clear and, in effect, a permanent part of the record. Very often, however, recent history is less clearly defined, and it is not until long after the fact that we can definitely identify a given market period as a bull market, bear market or something in between. Such is the case in the present instance, which, as we have been regularly noting, offers one of the more complex equity markets in recent memory. In attempting to classify it, however, we do have a few firm and and permanently fixed facts to work with. To begin with, the Dow-Jones Industrial Average is now down just a shade under 14 over a period of 160 trading days from December 31, 1976. If one cares to measure from the high of last September 21, the decline is 14.8 and is now 230 trading days long. This much, at least is unalter- able. Now, a decline on the order of magnitude of 14 can wind up as only one of two things when it is finally classified and catalogued by the market historian. It can be either an intermediate- term drop within the context of an ongoing bull market or it can be a part — either a major or minor , –' part — of an sta'geTritoWhi ongOing major bear cycle. ch of these two slots future Here, then, is the dilemma. It hfstortaiiSViiIti'iiimately place remains uncertain at t the first eightrronths h0i1s……….- 1 1977 . Let us examine the first possibility. A 14 bull-market correction, while not all that com- mon a phenomenon on an historical basis, still possesses ample precedent. As we hit the 14 level, however, we are approaching the maximum size for this particular species of market beast. If an intermediate-term correction, therefore, is all we are looking at, an end thereto should be approach- ing, regardless of whatever short-term horrors may be in store over the next few weeks. The only source of worry for the investor and portfolio manager, therefore, should be the possibility that, eight months to a year ago, we embarked on a new major bear cycle. It is thus worthwhile examining just how much paniC this particular prospect should engender at this particular stage of the game. The answer, if one looks at most recent history, is that the panic button should be pushed rather firmly. The two most recent bear markets were 1968-70 and 1973-74. Those little beauties took us down 36 and 45 on the Dow, respectively. A repetition at this point would take us to somewhere between 640 and 550, not a prospect to be regarded with tranquility. It is, there- fore, appropriate to ask whether most recent history is currently our most reliable guide. We are not so sure that it is. If one believes that a major cycle low occurred at the end of 1974, then bear market definitions for that cycle are no longer valid. During the previous cycle, that of the 1950's and early 1960's, we were accustomed to use a 20 screen as a filter for bullbea cycles. There were, indeed, identifiable bear markets during this period with corrections as small as 13. Thus, if we are to use this period as our guide, the worst could be just about over. —As we said above, we do not believe the 1968-74 experience is necessarily applicable in . …. —– – -. —-..- .. – – — — – —-,.– —— –…- …. ,.- the present instance. Without in any way minimizing the extent of the technical distribUtion Wh ich has taken place over the past summer, it is quite clear that there exists no distribution on the order of magnitude that was beginning to take place a decade ago. The phenomenon of massive distribu- tional tops, following a protracted rise fueled largely by speculative expectations, is one that is notably absent today. It would seem, therefore, that investment action based on the presumption of massive vulnerability from current levels would be premature at best. Dow-Jones Industrials (1200 p.m.) S & P Composite (1200 p. m.) Cumulative Index (8/18/77) AWT/jb 861. 57 97.40 666.57 ANTHONY W . TABELL DELAFIELD, HARVEY, TABELL No statement or elpreS510n of opinion or any otner moffer herein contolned 15, or IS to be deemed 10 be, directly or indirectly, on offer or the solrcllollon of on offer 10 buy or sell ony security referred to or mentIOned The moiler IS presented merely for the converlence 01 the subSCriber Whde we believe the sources of our informa- tIOn to be reliable, we In no way represent or guarantee the accuracy thereol nor of the statements mude herem Any action to be token by thc subSCriber should be based on hl own IOvestlgahon and Informahon Janney Montgomery Scott, tnc, as a corporation, and Its officers or employees, may now have, or may later loke, pOllIons or trades In reSpect to cny securities mentioned In thiS or cny future Inue, ond such posilion may be different from ony Views now or hereJiter expressed In thiS or any other Issue Janney Montgomery Scali, Inc, which IS regnlered With the SEC as on Investment adVisor, may give adVice 10 Its Investment odvlsory ond olher customers independently of any statements mode In thiS or In ony other rssue Further Information on cny sccuroly mentioned herern IS available on request