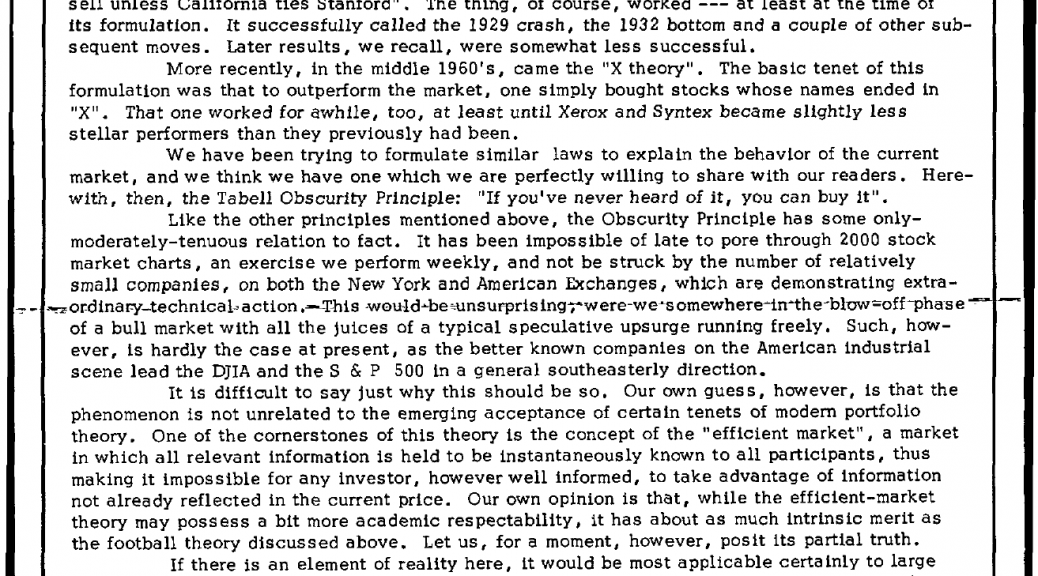 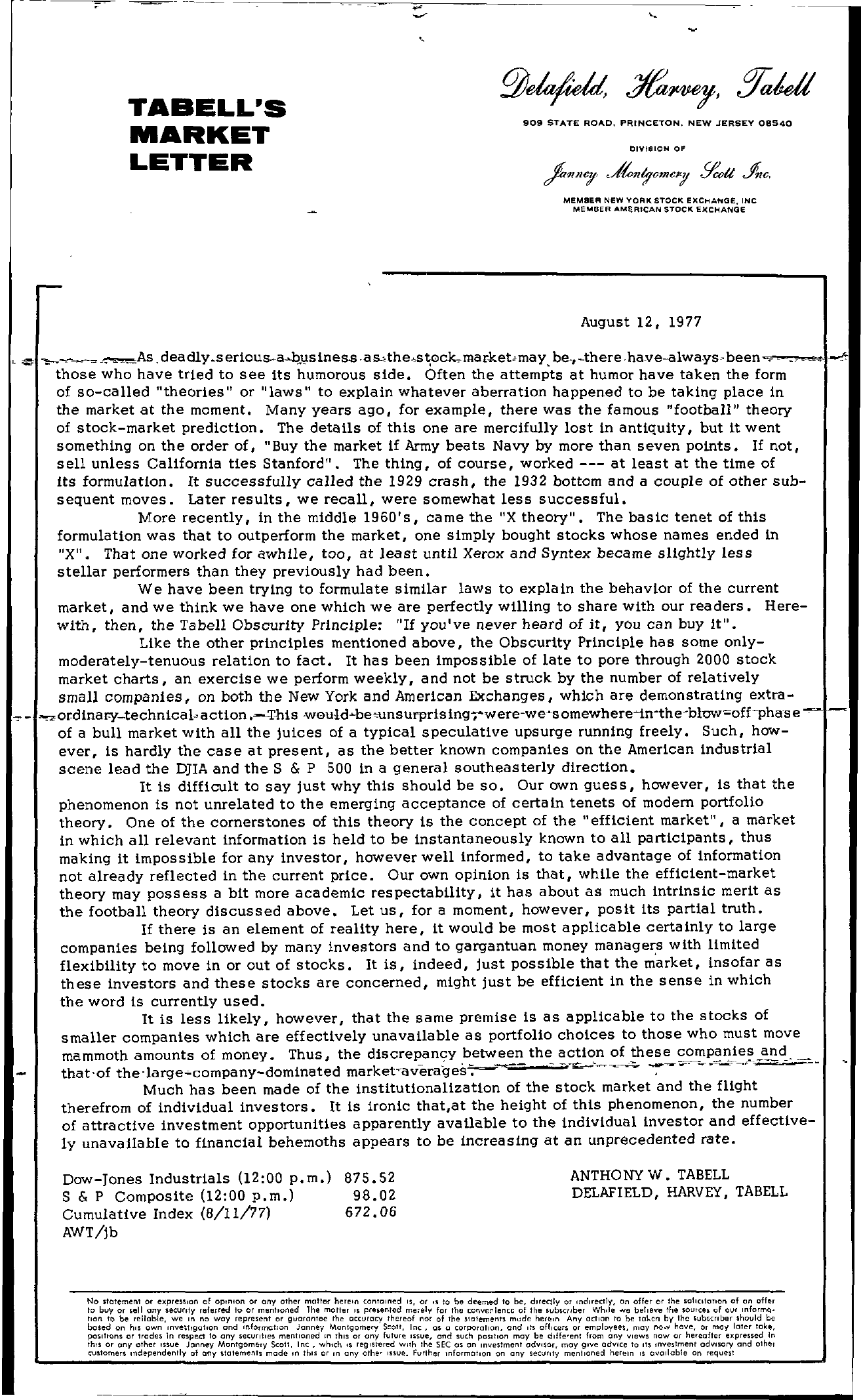 TABELL'S MARKET LETTER 909 STATE ROA.D, PRINCETON. NEW JERSEY 08540 tlIVI810N OF MEMBER NEW VORK STOCK EXCHANGE, INC MEMBER AM! RICAN STOCK EXCHANGe August 12, 1977 e ..,…–. h'As deadly.seriousa41.lsiness.asthe,soc&mar.ket'may, be-,-there .have-always-been –. – those who have tried to see its humorous side. Often the attempts at humor have taken the form of so-called theories or laws to explain whatever aberration happened to be taking place in the market at the moment. Many years ago, for example, there was the famous football theory of stock-market prediction. The details of this one are mercifully lost in antiquity, but it went something on the order of, Buy the market if Army beats Navy by more than seven pOints. If not, sell unless California ties Stanford. The thing, of course, worked — at least at the time of its formulation. It successfully called the 1929 crash, the 1932 bottom and a couple of other sub- sequent moves. Later results, we recall, were somewhat less successful. More recently, in the middle 1960's, came the X theory. The basic tenet of this formulation was that to outperform the market, one Simply bought stocks whose names ended in X. That one worked for awhile, too, at least until Xerox and Syntex became slightly less stellar performers than they previously had been. We have been trying to formulate similar laws to explain the behavior of the current market, and we think we have one which we are perfectly willing to share with our readers. Here- with, then, the Tabell Obscurity Principle If you've never heard of it, you can buy it. Like the other principles mentioned above, the Obscurity Principle has some only- moderately-tenuous relation to fact. It has been impossible of late to pore through 2000 stock market charts, an exercise we perform weekly, and not be struck by the number of relatively small companies, on both the New York and American Exchanges, which are demonstrating extra ..,. ordinary-technical action .-T-his w0uld.obeunsuf'!)ris ing.were-wes omewhere'in'the-blowoff-pha-s e – – of a bull market with all the juices of a typical speculative upsurge running freely. Such, how- ever, is hardly the case at present, as the better known companies on the American industrial scene lead the DJIA and the S & P 500 in a general southeasterly direction. It is difficult to say just why this should be so. Our own gues s, however, is that the phenomenon is not unrelated to the emerging acceptance of certain tenets of modem portfolio theory. One of the cornerstones of this theory is the concept of the effiCient market, a market in which all relevant information is held to be instantaneously known to all participants, thus making it impossible for any investor, however well informed, to take advantage of information not already reflected in the current price. Our own opinion is that, while the efficient-market theory may possess a bit more academic respectability, it has about as much intrinsic merit as the football theory discussed above. Let us, for a moment, however, posit its partial truth. If there is an element of reality here, it would be most applicable certainly to large companies being followed by many investors and to gargantuan money managers with limited flexibility to move in or out of stocks. It is, indeed, just possible that the m'arket, insofar as these investors and these stocks are concerned, might just be efficient in the sense in which the word is currently used. It is less likely, however, that the same premise is as applicable to the stocks of smaller companies which are effectively unavailable as portfolio choices to those who must move mammoth amounts of money. Thus, the discrepancy between the action of these companies and – .- – – -..—……… -…..—..';. -….–;;.—–…— – – that-of the'largecompany-dominated market'averages-;– Much has been made of the institutionalization of the stock market and the flight therefrom of individual investors. It is ironic that,at the height of this phenomenon, the number of attractive investment opportunities apparently available to the individual investor and effective- ly unavailable to financial behemoths appears to be increasing at an unprecedented rate. Dow-Jones Industrials (1200 p.m.) S & P Composite (1200 p.m.) Cumulative Index (8/11/77) AWT/jb 875.52 98.02 672.06 ANTHONY W. TABELL DELAFIELD, HARVEY, TABELL No totemenl or e)(preulon of op'nton or any other moiler herein contOlned IS, or , 10 be deemed to be, dHeqly OT indirectly, On offer or the SOIIC1tot,on of on offer 10 buy or sell any securlly referred 10 or mentioned The matter IS presenled merely for the cOl'wel'iencc of the ubscnber While 'Ie believe the sources of our Informolion to be reiJoble, we In no way repreent or guarantee the accuracy thereof nor of the statements mude herc!ln Any action to be to\…cn by the subSCriber should be based on hiS own Inve;llgoloon and InfOrmalion Janney Montgomery Scali, Inc, as a corporation, and Its officers or employees, may nON have, or may later lake, poslhons or trades In respect to any securities mentioned In thiS or any luture Issue, and such pOSition may be dlffe'ent from any views now or heteafter expressed In thiS or any other Issue Jonney Montgomery Scoll , Inc, which s registered with the SEC as on Investment adVisor, may gIVe adVice to lIs Investment adVISOry and other C'Ustomers Independently of any statements mode to Ihls or to ony olhe' Issue Further mformotlon on ony security menlloned herein IS available on request