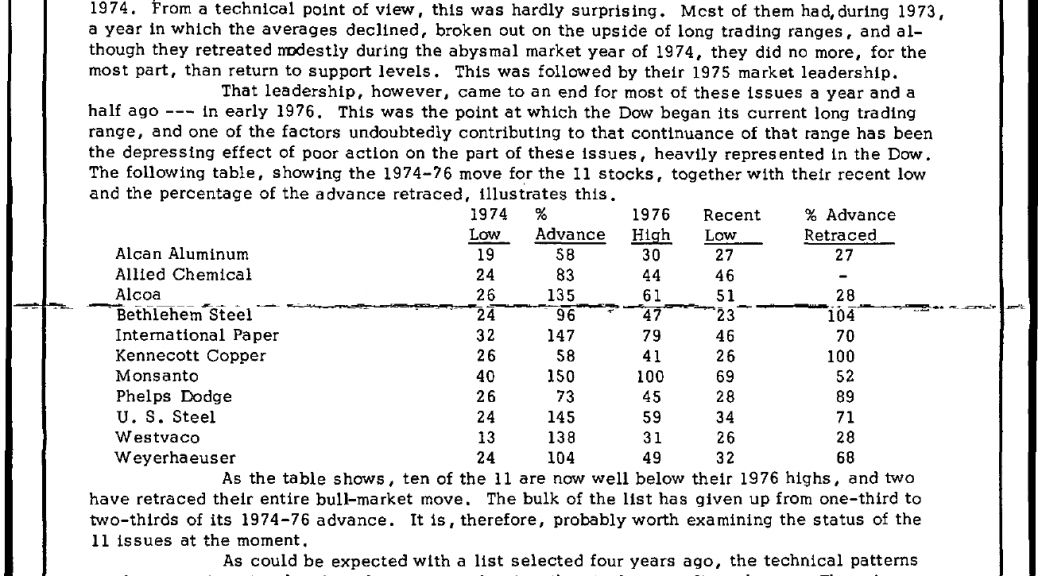 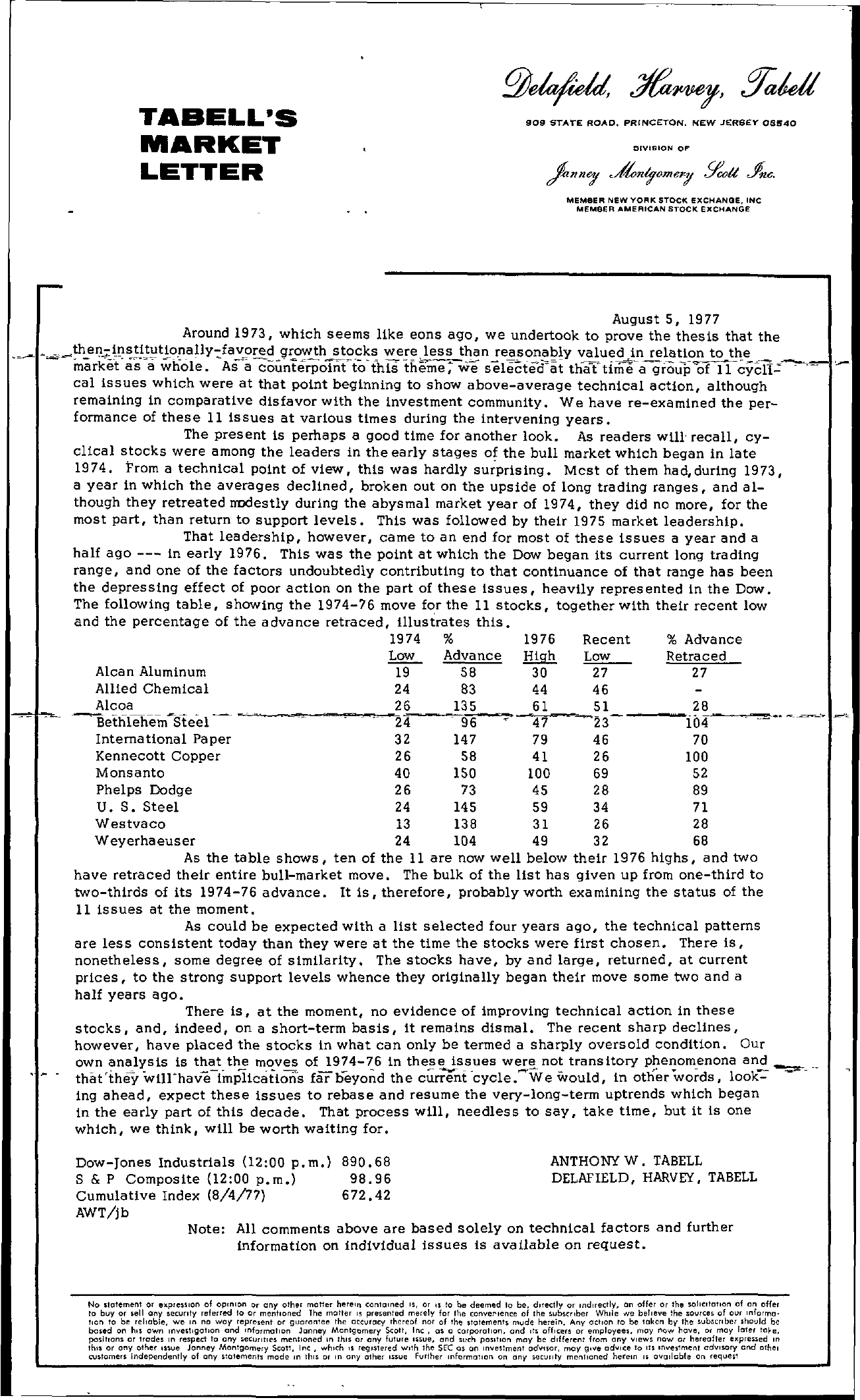 TABELL'S MARKET LETTER 909 STA'rE ROAD, PRCNCETON. NEW JERSEY 08540 DIVISION OF MEMBER NEW YORK STOCK EXCHANOE, INC MEMBER AMERICAN STOCK EXCHANGE August 5, 1977 Around 1973, which seems like eons ago, we undertook to prove the thesis that the — .,theninstitutionally-favored growth – marketasil whole. -Asacounterpo stocks were less tha innofhis theme-;-we nserleeacstoena-a'baltytnvaayltuiemd-ina-rgerloautpioonft ot 11 h'e;YCrr;—,-J' cal issues which were at that point beginning to show above-average technical action, although remaining in comparative disfavor with the investment community. We have re-examined the per- formance of these 11 issues at various times during the intervening years. The present is perhaps a good time for another look. As readers will' recall, cy- clical stocks were among the leaders in the early stages of the bull market which began in late 1974. From a technical paint of view, this was hardly surprising. Mcst of them had, during 1973, a year in which the averages declined, broken out on the upside of long trading ranges, and al- though they retreated rrodestly during the abysmal market year of 1974, they did no more, for the most part, than return to support levels. This was fallowed by their 1975 market leadership. That leadership, however, came to an end for most of these issues a year and a half ago — in early 1976. This was the point at which the Dow began its current long trading range, and one of the factors undoubtedly contributing to that continuance of that range has been the depressing effect of poor action on the part of these issues, heavlly represented in the Dow. The following table, shOWing the 1974-76 move for the 11 stocks, together with their recent low and the percentage of the a dva nce retraced, illustrates this. Alcan Aluminum 1974 Low 19 Advance 58 1976 High 30 Recent Low 27 Advance Retraced 27 All1ed Chemical 24 I.-,…- —-AslceotahlehemSteel- —'-;2246 83 44 46 135 61 51 96 47 -23 i2b48;–o -,-' – International Paper 32 147 79 46 70 Kennecott Copper 26 58 41 26 lOa Monsanto 40 ISO lOa 69 52 Phelps Dodge 26 73 45 28 89 U. S. Steel 24 145 59 34 71 Westvaco 13 138 31 26 28 Weyerhaeuser 24 104 49 32 68 As the table shows, ten of the 11 are now well below their 1976 highs, and two have retraced their entire bull-market move. The bulk of the list has given up from one-third to two-thirds of its 1974-76 advance. It is, therefore, probably worth examining the status of the 11 issues at the moment. As could be expected with a list selected four years ago, the technical patterns are less consistent today than they were at the time the stocks were first chosen. There is, nonetheless, some degree of similarity. The stocks have, by and large, returned, at current prices, to the strong support levels whence they originally began their move some two and a half years ago. There is, at the moment, no evidence of improving technical action in these stocks, and, indeed, on a short-term baSiS, it remains dismal. The recent sharp declines, however, have placed the stocks in what can only be termed a sharply oversold condition. Our own analysis is that the moves of 1974-76 in these issues wer not tranSitory pJenomenona and that 'they willohave-imPlicatiOlis far oeyond the current 'cycle.-We would, in other words, look— – – ing ahead, expect these issues to rebase and resume the very-long-term uptrends which began in the early part of this decade. That process will, needless to say, take time, but it is one which, we think, will be worth waiting for. Dow-Jones Industrials (1200 p.m.) 890.68 ANTHONY W. TABELL S & P Composite (1200 p.m.) 98.96 DELAFIELD, HARVEY, TABELL Cumulative Index (8/4/77) 672.42 AWT/Jb Note AI! comments above are based solely on technical factors and further information on individual issues is available on request. No ,totemen! or eltpreSSlon of opInion or any other matter herein contOlned IS, or IS to be deemed to be, directly or Indirectly, on offer or the SOllCIIoilon of on offer to buy or sell ony security referred to or mentioned The molter IS presented merely for the convellence of the ubscflber While 'Ne believe the SOurces of our Informa Tlon to be reliable, we In no way represent or guarantee the atcuracy thereof nor of the statements mude hertlin. Any action to be token by the subscriber should be based on hiS own Inveshgallan and Informahon Janney Montgomery Scott, Inc, as a corporation, and Its officers or employees, may now hove, or may loter lae, posillons or trodes In respect 10 any seCurities mentioned In thiS or any future Issue, and uch position may be different from any views now or hereafter expressed In thiS or any other Inue Janney Montgomery Scott, Inc, whICh IS registered With the SEC as on InveSmenT adVisor, may give odvlce to Its invesTment adVISOry and oThel customers Independently of any statements mode tn thiS or tn any other Inue Further information on any security mentioned herein IS available on request