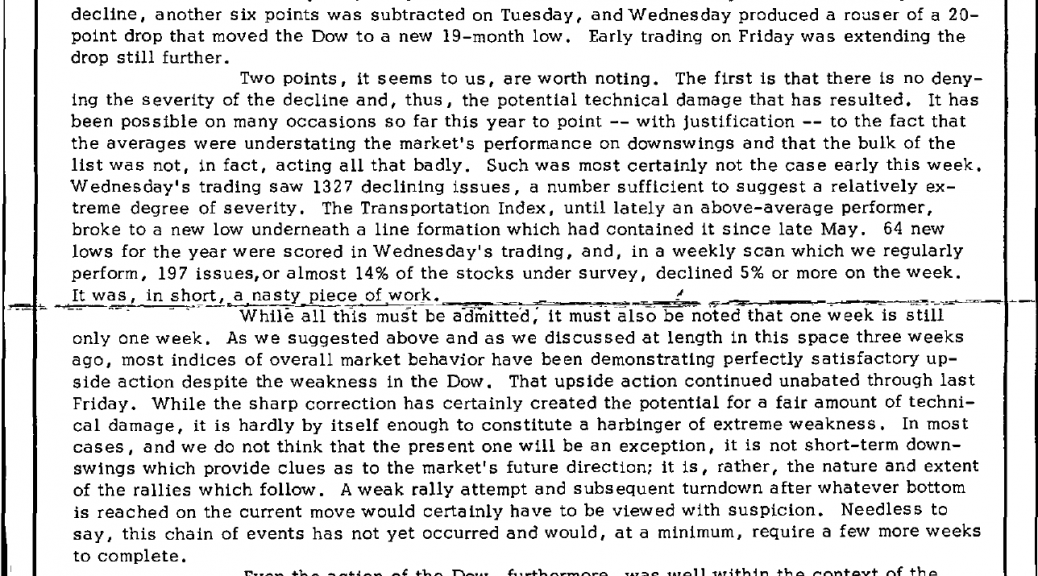 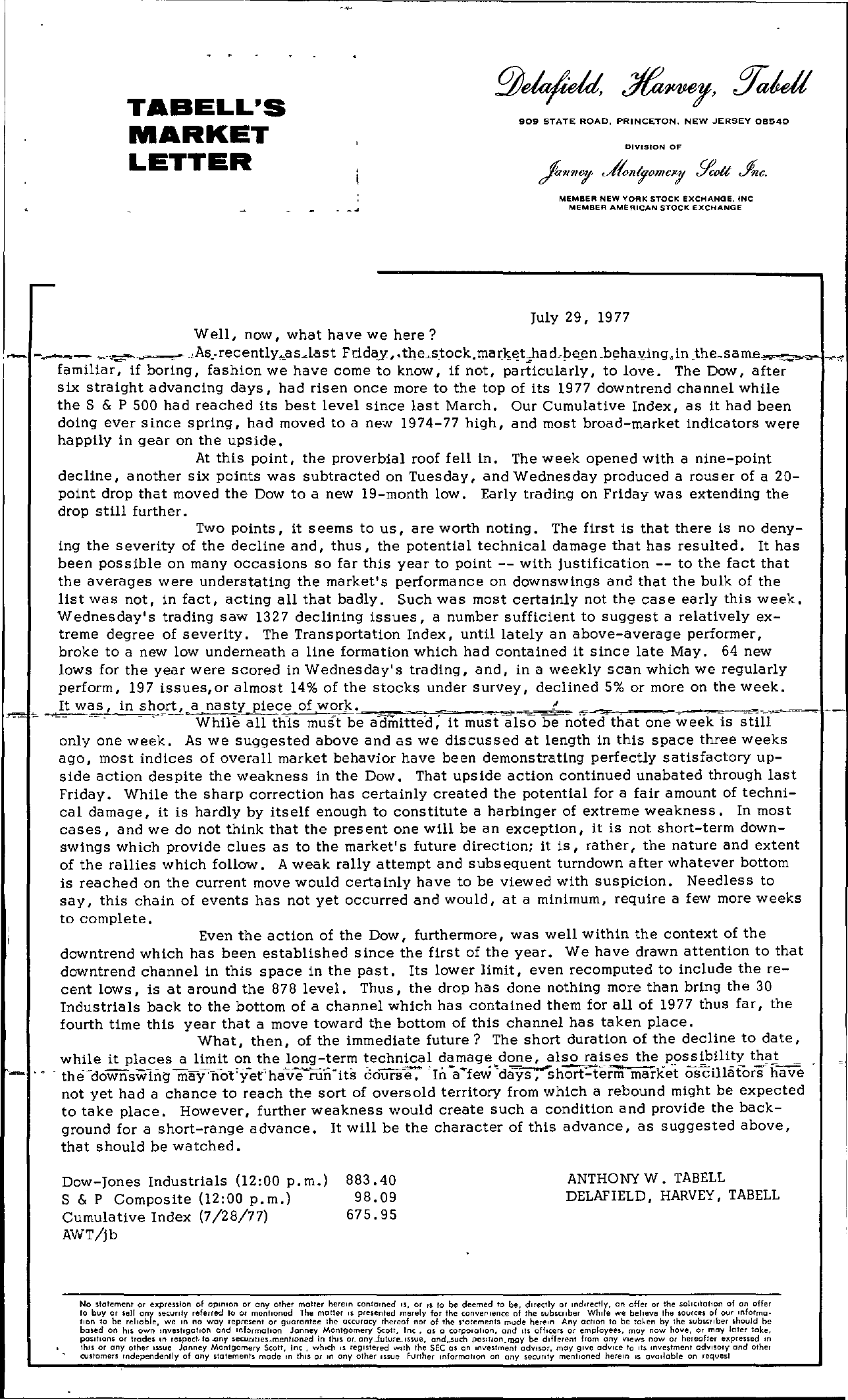 TABELL'S MARKET LETTER 909 STATE ROAD, PRINCETON, NEW JERSEY 08540 DIVISION OF MEMBER NEW YORK STOCK EXCHANoe, INC MEMBER AMERICAN STOCK eXCHANGE Well, now, what have we here July 29, 1977 , – -.- '. ,As.. recently,aslast Fdda'ythestock.markeothad,be.en.beha.1ngin Jhe.same .. , '– familiar, if boring, fashion we have come to know, if not, particularly, to love. The Dow, after six straight advancing days, had risen once more to the top of its 1977 downtrend channel while the S & P 500 had reached its best level since last March. Our Cumulative Index, as it had been doing ever since spring, had moved to a new 1974-77 high, and most broad-market indicators were happily in gear on the upside. At this point, the proverbial roof fell in. The week opened with a nine-point decline, another six points was subtracted on Tuesday, and Wednesday produced a rouser of a 20- point drop that moved the Dow to a new 19-month low. Early trading on Friday was extending the drop still further. Two pOints, it seems to us, are worth noting. The first is that there is no deny- ing the severity of the decline and, thus, the potential technical damage that has resulted. It has been possible on many occasions so far this year to point — with justification — to the fact that the averages were understating the market's performance on downswings and that the bulk of the list was not, in fact, acting all that badly. Such was most certainly not the case early this week. Wednesday's trading saw 1327 declining issues, a number sufficient to suggest a relatively ex- treme degree of severity. The Transportation Index, until lately an above-average performer, broke to a new low underneath a line formation which had contained it since late May. 64 new lows for the year were scored in Wednesday's trading, and, in a weekly scan which we regularly perform, 197 issues,or almost 14 of the stocks under survey, declined 5 or more on the week. — – …I.t.w,as-,'-i'n–schort, a nasty piece of work. While all this must be admitted; it must also ! be not;;jttiat one week is . . '' still ' only one week. As we suggested above and as we discussed at length in this space three weeks ago, most indices of overall market behavior have been demonstrating perfectly satisfactory up- side action despite the weakness in the Dow. That upside action continued unabated through last Friday. While the sharp correction has certainly created the potential for a fair amount of techni- cal damage, it is hardly by itself enough to constitute a harbinger of extreme weakness. In most cases, and we do not think that the present one will be an exception, it is not short-term down- swings which provide clues as to the market's future direction; it is, rather, the nature and extent of the rallies which follow. A weak rally attempt and subsequent turndown after whatever bottom is reached on the current move would certainly have to be viewed with suspicion. Needless to say, this chain of events has not yet occurred and would, at a minimum, require a few more weeks to complete. Even the action of the Dow, furthermore, was well within the context of the downtrend which has been established since the first of the year. We have drawn attention to that downtrend channel in this space in the past. Its lower limit, even recomputed to include the re- cent lows, is at around the 878 level. Thus, the drop has done nothing mOre than bring the 30 Industrials back to the bottom of a channel which has contained them for all of 1977 thus far, the fourth time this year that a move toward the bottom of this channel has taken place. What, then, of the immediate future The short duration of the decline to date, while it places a limit on the long-term technical damage done, also raises the possibility that – the-doWnswingmay-'liol'iet'ha-verun'its cciUrS.' 'In-afeWdays, shortterm marKet oscilliitOrs'llave not yet had a chance to reach the sort of oversold territory from which a rebound might be expected to take place. However, further weakness would create such a condition and provide the back- ground for a short-range advance. It will be the character of this advance, as suggested above, that should be watched. Dow-Jones Industrials (1200 p.m.) S & P Composite (1200 p.m.) Cumulative Index (7/28/77) AWT/jb 883.40 98.09 675.95 ANTHONY W. TABELL DELAFIELD, HARVEY, TABELL No statement or expression of opmlon or any olner matter herein contaIned IS, or .5 to be deemed to be, directly or Indirectly, on offer Of the oll(llol1on of on offer fa buy or sell cny securrty referred to or mentioned The moiler 1 presented merely for the converlence of the subscriber While we believe the sources of our Informa lion fa be reliable, we In no way represent or guaronlee the accuracy thereof nor of the s'alements mode herein Any action to be toen by the subscnber should be based on hiS own investigation and InfOrmalion Jonney Montgomery Scali, Inc, os 0 corporation, and Its officers or employees, may now have, or may rater lake, posilions or tr.cdes .n respoct.lo .cny secu.utJeSmenllOned In thIS or. any bture'Sve. and;uch pOSIIJOn.IIl!JY be different from ony views now or hereafter expreSed In thu or any other Issue Janney Montgomery Scott, Inc, wh,ch ,s registered With the SEC as on ,nvestment adVisor, may give adVICe to Its Investment adVisory and othe. customers .ndependently of any statements made In thiS or In any other Issue Funner Informallon on any securoty mentioned herein IS oVOIlable on request