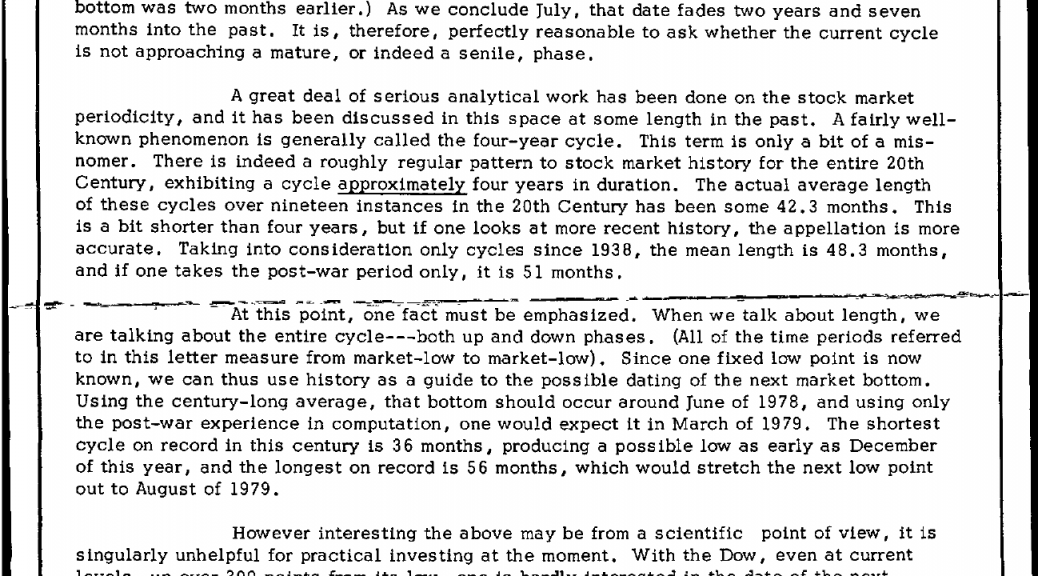 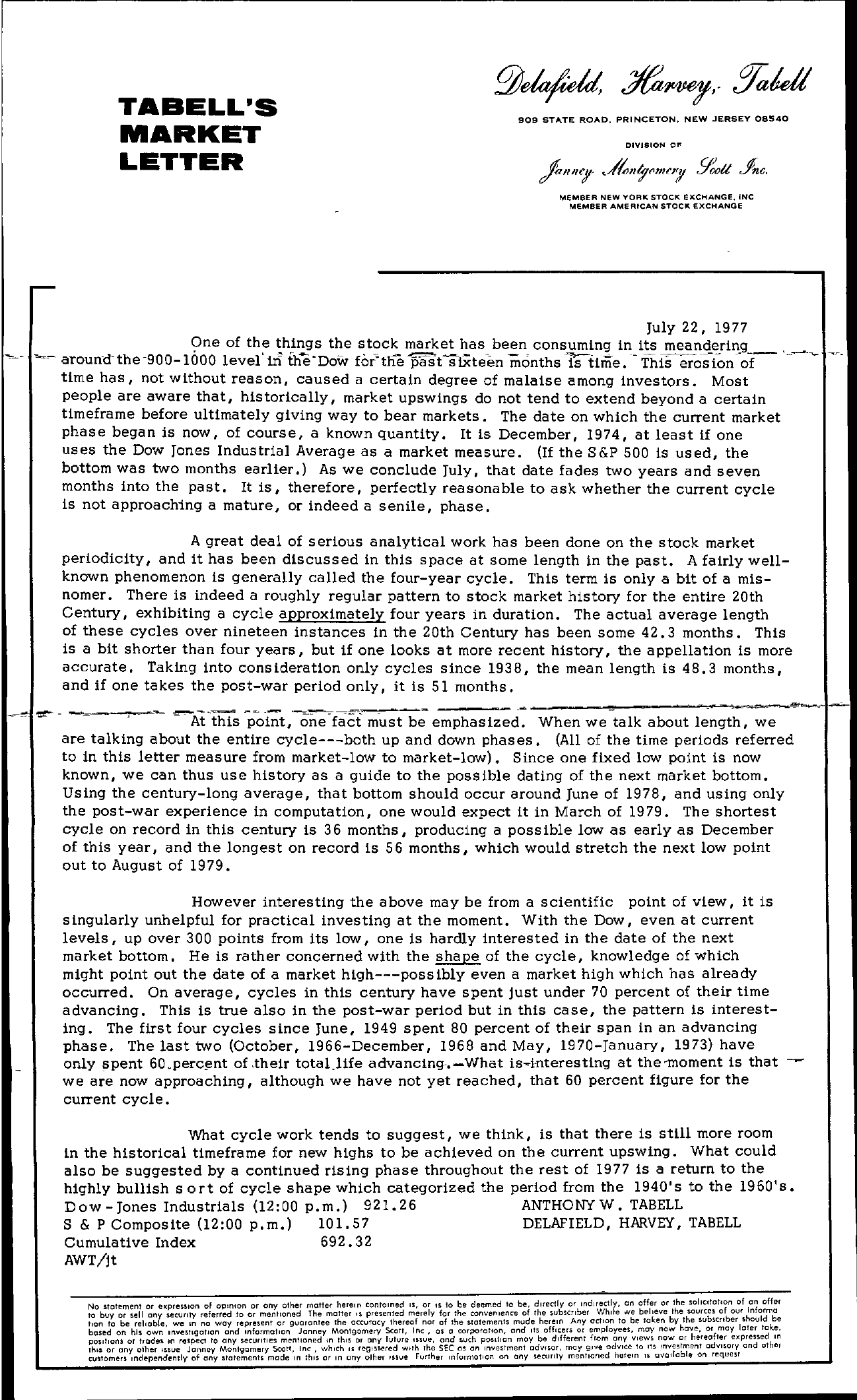 TABELL'S MARKET LETTER 909 STA.TE ROAD, PRINCETON, NEW JERSEY 08540 DIVISION OF MEMBER New YORK STOCK EXCHANGE, INC MEMBER AMERICAN STOCK eXCHANGE July 22, 1977 — — — ——' .One of the things the stock market has been consuming in its meandering – around'the-9DO-I000 level in t….h-e-.Dow fo,-r'the past–s.i-x- te-en mo- nths fs-tim- e. — T- hi-s-,e-ro-s-i-on –of , time has, not without reason, caused a certain degree of malaise among investors. Most people are aware that, historically, market upswings do not tend to extend beyond a certain tlmeframe before ultimately giving way to bear markets. The date on which the current market phase began is now, of course, a known quantity. It is December, 1974, at least if one uses the Dow Jones Industrial Average as a market measure. (If the S&P 500 is used, the bottom was two months earlier.) As we conclude July, that date fades two years and seven months into the past. It is, therefore, perfectly reasonable to ask whether the current cycle is not approaching a mature, or indeed a senile, phase. A great deal of serious analytical work has been done on the stock market periodicity, and it has been discussed in this space at some length in the past. A fairly well- known phenomenon is generally called the four-year cycle. This term is only a bit of a mis- nomer. There is indeed a roughly regular pattern to stock market history for the entire 20th Century, exhibiting a cycle approximately four years in duration. The actual average length of these cycles over nineteen instances in the 20th Century has been some 42.3 months. This is a bit shorter than four years, but if one looks at more recent history, the appellation is more accurate. Taking into consideration only cycles since 193B, the mean length is 4B.3 months, and if one takes the post-war period only, it is 51 months. –,– -'—'– –. -,,——- -' At this pOint, one fact must be emphaSized. When we talk about length, we are talking about the entire cycle—both up and down phases. (All of the time periods referred to in this letter measure from market-low to market-low). Since one fixed low point is now known, we can thus use history as a guide to the possible dating of the next market bottom. Using the century-long average, that bottom should occur around June of 197B, and using only the post-war experience in computation, one would expect it in March of 1979. The shortest cycle on record in this century is 36 months, producing a possible low as early as December of this year, and the longest on record is 56 months, which would stretch the next low point out to August of 1979. However interesting the above may be from a scientific point of view, it is singularly unhelpful for practical investing at the moment. With the Dow, even at current levels, up over 300 pOints from its low, one is hardly interested in the date of the next market bottom. He is rather concerned with the shape of the cycle, knowledge of which might point out the date of a market high—possibly even a market high which has already occurred. On average, cycles in this century have spent just under 70 percent of their time advancing. This is true also in the post-war period but in this case, the pattern is interesting. The first four cycles since June, 1949 spent BO percent of their span in an advancing phase. The last two (October, 1966-December, 196B and May, 1970-January, 1973) have -only spent 60.perc!nt of ,their totalJife advancing,.-What is-interesting at the-moment is that we are now approaching, although we have not yet reached, that 60 percent figure for the current cycle. What cycle work tends to suggest, we think, is that there is still more room in the historical tlmeframe for new highs to be achieved on the current upswing. What could also be suggested by a continued rising phase throughout the rest of 1977 is a return to the highly bullish sort of cycle shape which categorized the period from the 1940's to the 1960's. Dow-Jones Industrials (1200 p.m.) 921.26 ANTHONYW. TABELL S & P Composite (1200 p.m.) 101.57 DELAFIELD, HARVEY, TABELL Cumulative Index 692.32 AWT!jt No statement or expressIon of opinion or ony other matter herein contolned IS, or IS 10 be deemed 10 be, directly or ,ndirectly, on offer or Ihe SOIICllol,on of on offer to buy tlon to or sell ony security be reliable, we m referred no way 10 or mentioned The motler '5 presented merely represent or guarantee the accuracy thereof nor for of the the convenience Motemen!s m of ud the subSCriber e heem Any While Ne believe action 10 be fa!.;en yheIheousrucbssconfbeorursanuftdomkbee based on his own positions or trades Invesllgatlon and mformatlon Janney Montgomery In respect to any securities menlloned m thiS or any Scali, future Inc, os a Issue, and corporation, and Its a,f'eers or such posLtlon may be dlfferen employees, may from any views now now have, or may later or hereaJter e)(prese d h,n' Ihls or any other Issue Janney Montgomery Scott, Inc, whICh 15 registered With Ihe SEC as on Investment adVisor, may give adVICe to Its Investment a vlSoryon at I'll customers Independently of any statements mode In thiS or In any other Issue Further mformatlon on any security mentioned herem IS avaIlable on request