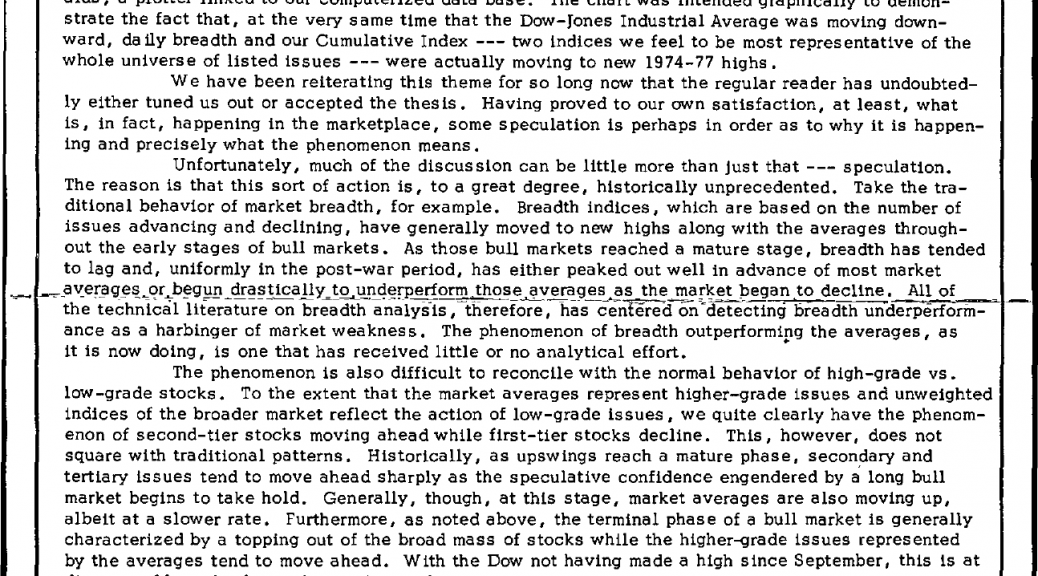 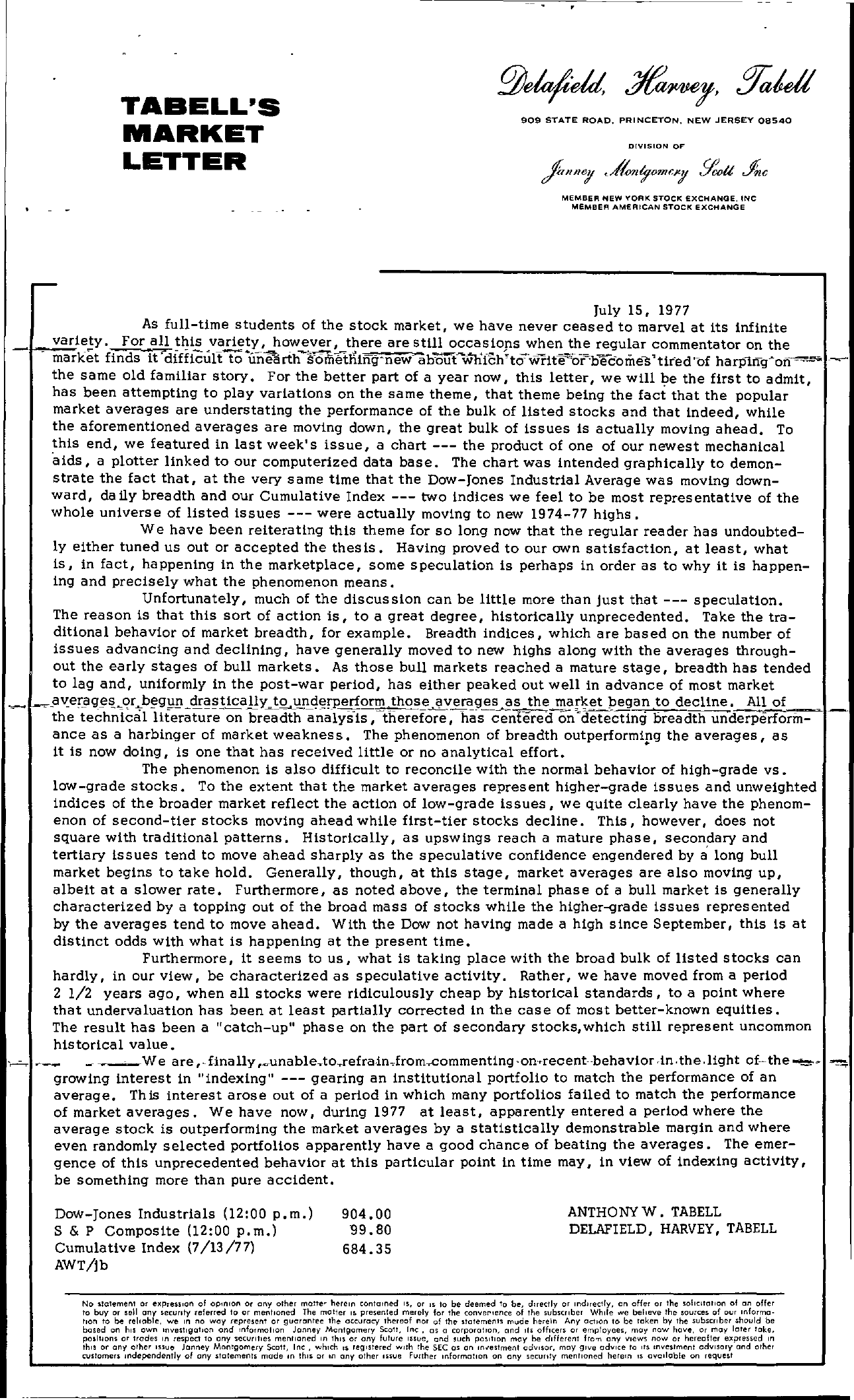 TABELL'S MARKET LETTER 909 STATE ROAD. PRINCETON, NEW JERSEY 08540 DIVISION OF' MEMBER NEW YORK STOCK eXCHANGE, INC MEMBER AMERICAN STOCI( eXCHANGe July 15, 1977 As full-time students of the stock market, we have never ceased to marvel at its Infinite ,….;.v.a..rlety. For all this variety, however, there are still occasions when the regular commentator on the market finds Itd1fficurfto'iine'arths'6if,irthlng-new abOutwnichtYwritForbecome-s'tked of harpl.ngofi … the same old familiar story. For the better part of a year now, this letter, we will be the first to admit, has been attempting to play variations on the same theme, that theme being the fact that the popular market averages are understating the performance of the bulk of listed stocks and that indeed, while the aforementioned averages are moving down, the great bulk of issues Is actually moving ahead. To this end, we featured in last week's issue, a chart — the product of one of our newest mechanical aids, a plotter linked to our computerized data base. The chart was Intended graphically to demon- strate the fact that, at the very same time that the Dow-Jones Industrial Average was moving down- ward, da lly breadth and Our Cumulative Index — two indices we feel to be most representative of the whole universe of listed issues — were actually moving to new 1974-77 highs. We have been reiterating this theme for so long now that the regular reader has undoubted- ly either tuned us out or accepted the thesis. Having proved to our own satisfaction, at least, what is, in fact, happening in the marketplace, some speculation is perhaps in order as to why it is happen- ing and precisely what the phenomenon means. Unfortunately, much of the discussion can be little more than Just that — speculation. The reason Is that this sort of action is, to a great degree, historically unprecedented. Take the tra- ditional behavior of market breadth, for example. Breadth indices, which are based on the number of issues advancing and declining, have generally moved to new highs along with the averages through- out the early stages of bull markets. As those bull markets reached a mature stage, breadth has tended to lag and, uniformly in the post-war period, has either peaked out well in advance of most market aver.l'gsor begun drastlcally.to underperform.those averages as the market began to decline. All of – thetechic;l -literature-on breadtha'r;alysls,-tlierefO're, has-c-;;-ntered On\letectlnc;j breadth underperform- ance as a harbinger of market weakness. The phenomenon of breadth outperforming the averages, as It is now doing, is one that has received little or no analytical effort. The phenomenon Is also difficult to reconcile with the normal behavior of high-grade vs. low-grade stocks. To the extent that the market averages represent highet-grade issues and unweighted indices of the broader market reflect the action of low-grade Issues, we quite clearly have the phenom- enon of second-tier stocks moving ahead while first-tier stocks decline. This, however, does not square with traditional patterns. Historically, as upswings reach a mature phase, secondary and tertiary issues tend to move ahead sharply as the speculative confidence engendered by a long bUll market begins to take hold. Generally, though, at this stage, market averages are also moving up, albeit at a slower rate. Furthermore, as noted above, the terminal phase of a bull market is generally characterized by a topping out of the broad mass of stocks while the hlgher–grade Issues represented by the averages tend to move ahead. With the Dow not having made a high since September, this Is at distinct odds with what Is happening at the present time. Furthennore, It seems to us, what is taking place with the broad bulk of listed stocks can hardly, in our view, be characterized as speculative activity. Rather, we have moved from a period 2 1/2 years ago, when all stocks were ridiculously cheap by historical standards, to a point where that undervaluation has been at least partially corrected In the case of most better-known equities. The result has been a catch-up phase on the part of secondary stocks,whlch still represent uncommon historical value. ,-0,. Weare, f.inally ,unable,to,refra.ln.from,commenting on,recentbehavlor .in the. light of-the…,.. grOWing interest in indexing — gearing an institutional portfolio to match the performance of an average. This interest arose out of a period in which many portfolios failed to match the performance of market averages. We have now, during 1977 at least, apparently entered a period where the average stock is outperfonnlng the market averages by a statistically demonstrable margin and where even randomly selected portfolios apparently have a good chance of beating the averages. The emer- gence of this unprecedented behavior at this particular point in time may, In view of indexing activity, be something more than pure accident. DOW-Jones Industrials (1200 p.m.) S & P Composite (1200 p. m.) Cumulative Index (7/13/77) AWT/Jb 904.00 '99.80 684.35 ANTHONY W TABELL DELAFIELD, HARVEY, TABELL No slclemenl Of eXpression of opmlon or any other motte herein contatned IS, or IS to be deemed to be, dnedly or indirectly, on offer or Ihe solicltotlon of on offer to buy or sell any setunty referred 10 or mentioned The motter I presenled merely for the converlence of the subscrIber While we belIeve the sources of our informa- tion to be reliable, we In no way represent or guarantee the accuracy thereof nor af the statements mude herein Any ac/lon to be taken by the subscnber should be based on hiS own Investlgahon and Information Janney Montgomery Sco11, Inc, as a corporation, and Its offlcer or employees, may now have, or may later toke, po,lttons or trades In respect to any securities mentioned In thiS or any future Issue, and such pOltlon may be different fro'll any views now or hereafter epressed In thiS or any other ISSue Janney Montgomery Scott, Inc, which 15 registered With the SEC as an lneStment adVisor, may give adVice to 115 Investment adVisory and othel customers IIldependentJy of any statements mode III thiS or In any other Issue Further information on ony security mentioned herein IS avollable on request