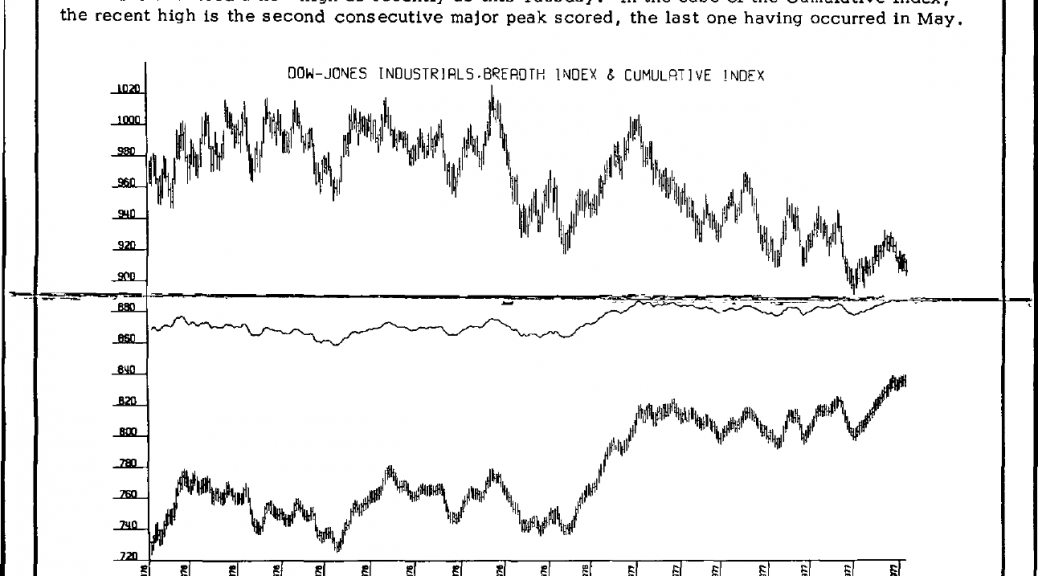 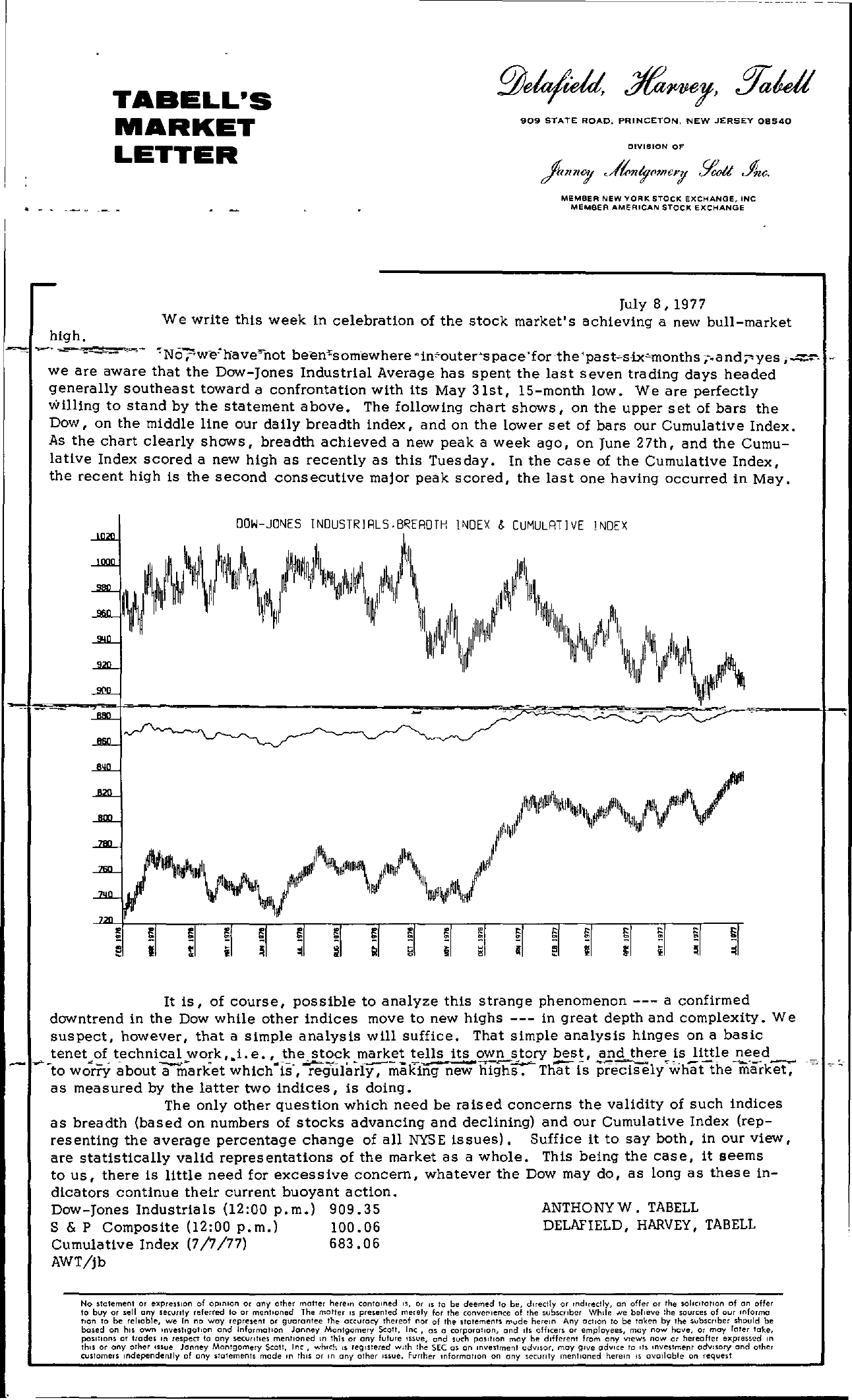 ,———————————————————————————————- TABELL'S MARKET LETTER 909 STATE ROAD. PRINCETON, NEW JERSEY 08540 DIVISION OF MEMBER NEW VORK STOCK eXCHANoe, INC MEMBEA AMERICAN STOCK EXCHANGE Tuly 8, 1977 high. We write this week in celebration of the stock market's achieving a new bull-market – — – – Noiw-ehavenot be-ensom-ewhere in70uterspace'for-the'pasts-lxmonths ;-.and;yes i we are aware that the DOW-Tones Industrial Average has spent the last seven trading days headed generally southeast toward a confrontation with its May 31st, 1S-month low. We are perfectly willing to stand by the statement above. The following chart shows, on the upper set of bars the Dow, on the middle line our dally breadth index, and on the lower set of bars our Cumulative Index. As the chart clearly shows, breadth achieved a new peak a week ago, on Tune 27th, and the Cumu- lative Index scored a new high as recently as this Tuesday. In the case of the Cumulative Index, the recent high is the second consecutive major peak scored, the last one having occurred in May. It is, of course, possible to analyze this strange phenomenon — a confirmed downtrend in the Dow while other indices move to new highs — in great depth and complexity. We suspect, however, that a simple analysis will suffice. That simple analysis hinges on a basic tenet of ' t e c h n ical 'w o r k , . l . e . ,. . th e stoc ….– k,Lmarke t t-,e-…l.. ls its own story — best, and there is .,,-. little ne. ed ….. ., to worry about a market which iso, reg-ularly, making new highs. That is precisely what the market, as measured by the latter two indices, is doing. The only other question which need be raised concerns the validity of such indices as breadth (based on numbers of stocks advancing and declining) and our Cumulative Index (rep- resenting the average percentage change of all NYSE issues). Suffice it to say both, in our view, are statistically valid representations of the market as a whole. This being the case, it seems to us, there is little need for excessive concern, whatever the Dow may do, as long as these in- dicators continue their current buoyant action. Dow-Tones Industrials (1200 p.m.) 909.35 ANTHONYW. TABELL S & P Composite (1200 p.m.) 100.06 DELAFIELD, HARVEY, TABELL Cumulative Index (7/7/77) 683.06 AWT/Jb No stafement or exprelSlon of opinion or any other motler herem contolned IS, or . to be deemed 10 be, dlrect!y or indirectly, on offer or the solicitation of on offer to buy or sell ony secuflly referred to or mentioned The motter 1 presented merely for the conver-Ience of the suscllber While -Ne believe !he sources of our mforma lion to be rehable, we In no way represent or guarantee the accuracy thereof nor of the statements mde herein Any action to be token by the subSCriber should be based on hiS own Inveshgohon and Information Janney Montgomery Scott, Inc, aS a corporation, and Its offICers or employees, may now have, or may lofer toke, POSltlOM or trodes In respect to any SeCUrities mentioned In this or any future ISSUe, and such position moy be different from any views now or hereafter elpressed In thiS or ony other Issue Janney Montgomery Scoll, Inc. which IS registered With the SEC 0 on Investment odvlsor, may gIVe adVice 10 lIs ,vestment adVISOry and other customers ,dependently of any stolements mode Ifl thiS or In ony other Issue. further 1I1formotlon on any security mentioned herein IS aVailable on requesl