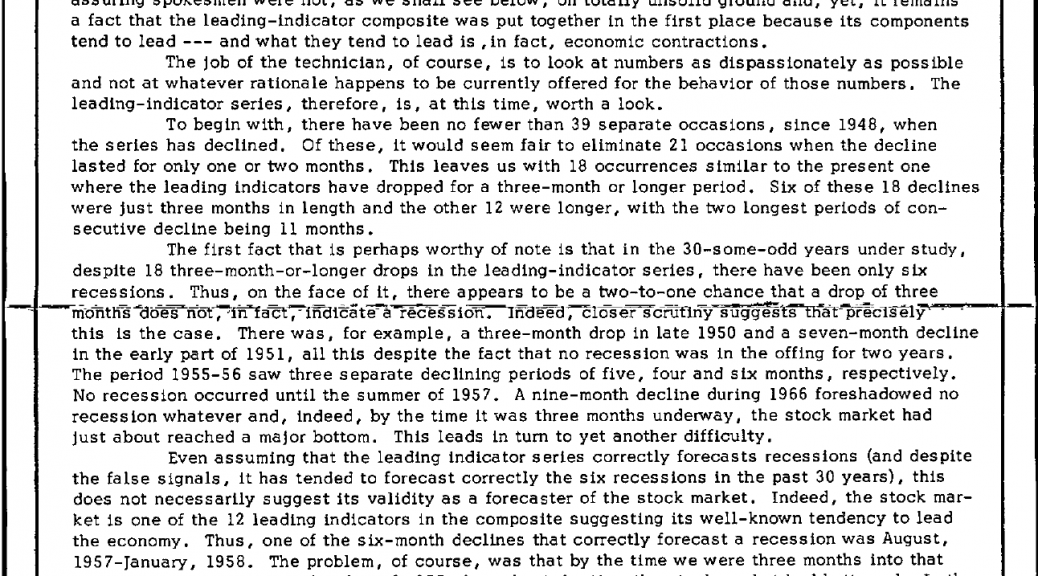 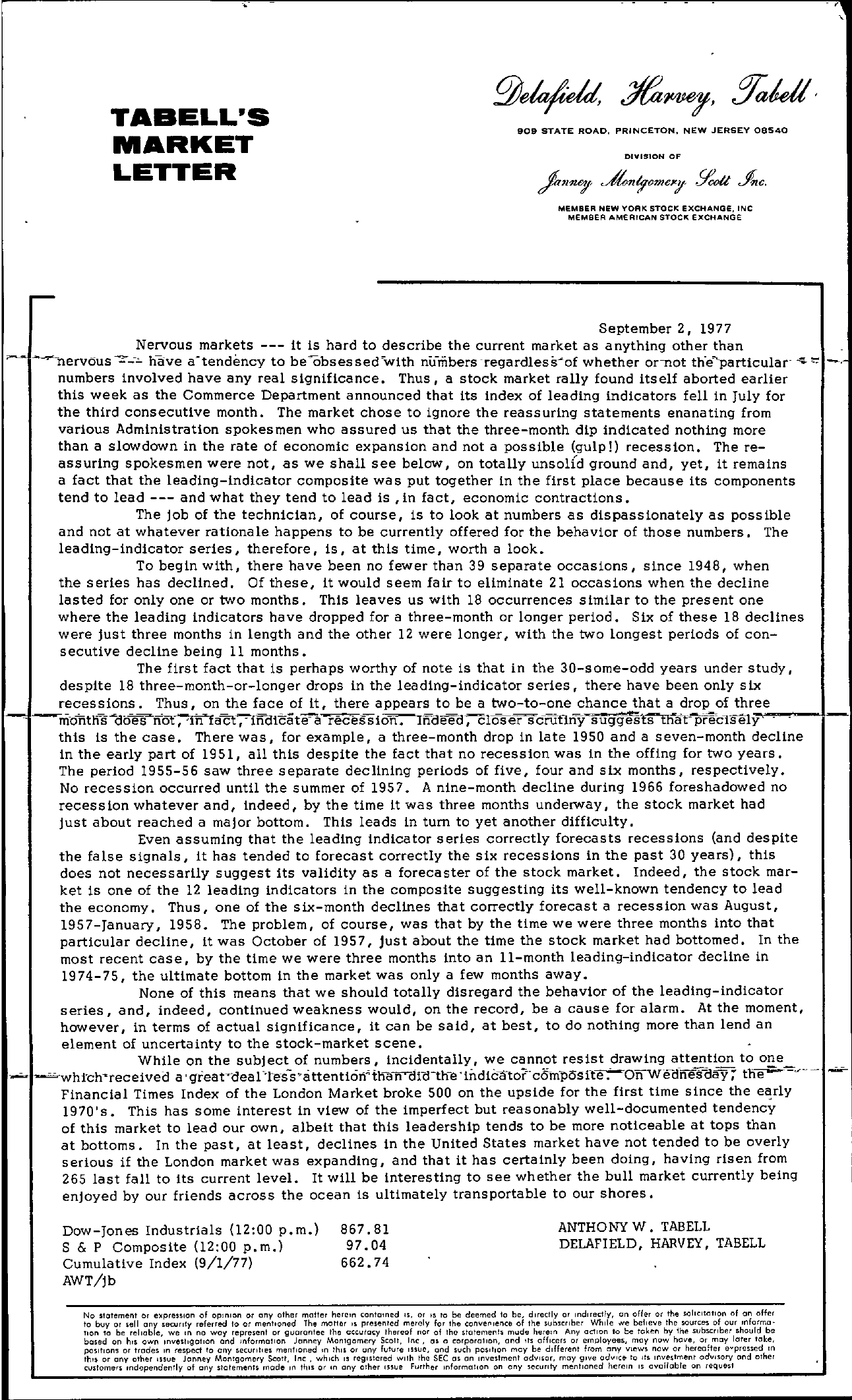 TABELL-S MARKET LETTER , 909 STATE ROAD, PRINCETON, NEW JERSEY 08540 DIVISION OF MEMBER NEW YOAK STOCK eXCHANGE, tNC MEMBER AMERICAN STOCK eXCHANGE September 2, 1977 Nervous markets — it Is hard to describe the current market as anything other than -,I —-nervous ,,– have a-tendency to beobsessed-wlth nu-riibers -regardlessof whether or-not theparticular- numbers Involved have any real significance. Thus, a stock market rally found itself aborted earlier this week as the Commerce Department announced that Its Index of leading indicators fell In July for the third consecutive month. The market chose to Ignore the reassuring statements enanatlng from various Administration spokesmen who assured us that the three-month dip Indicated nothing more than a slowdown in the rate of economic expansion and not a possible (gulp!) recession. The re- assuring spokesmen were not, as we shall see below, on totally unsolid ground and, yet, it remains a fact that the leading-Indicator composite was put together In the first place because its components tend to lead — and what they tend to lead Is ,In fact, economic contractions. The job of the technician, of course, Is to look at numbers as dispassionately as possible and not at whatever rationale happens to be currently offered for the behavior of those numbers. The leading-Indicator series, therefore, Is, at this time, worth a look. To begin with, there have been no fewer than 39 separate occasions, since 1948, when the series has declined. Of these, it would seem fair to eliminate 21 occasions when the decline lasted for only one or two months. This leaves us with 18 occurrences similar to the present one where the leading indicators have dropped for a three-month or longer period. Six of these 1B declines were just three months In length and the other 12 were longer, with the two longest periods of con- secutive decline being 11 months. The first fact that Is perhaps worthy of note Is that in the 30-some-odd years under study, despite 18 three-month-or-longer drops in the leading-indicator series, there have been only six -'montre)cjess-sdibo-ness. Thus, on the face of it, il5t-;infaCt7indlcatea there appears recessiO!l.lnd teoe db;eCal otsweor s- t6oi-.oi tn1en yc hsaungcgelSt hUiaattaprdercojpSioHfyt h,.r;e.e………- – t this is the case. There was, for example, a three-month drop In late 1950 and a seven-month decline in the early part of 1951, all this despite the fact that no recession was in the offing for two years. The period 1955-56 saw three separate declining periods of five, four and six months, respectively. No recession occurred until the summer of 1957. A nine-month decline during 1966 foreshadowed no recession whatever and, indeed, by the time it was three months undelWay, the stock market had just about reached a major bottom. This leads In tum to yet another difficulty. Even assuming that the leading indicator series correctly forecasts recessions (and despite the false signals, it has tended to forecast correctly the six recessions in the past 30 years), this does not necessarily suggest its validity as a forecaster of the stock market. Indeed, the stock mar- ket is one of the 12 leading indicators In the composite suggesting its well-known tendency to lead the economy. Thus, one of the six-month declines that correctly forecast a recession was August, 1957-January, 1958. The problem, of course, was that by the time we were three months Into that particular decline, it was October of 1957, Just about the time the stock market had bottomed. In the most recent case, by the time we were three months into an ll-month leading-indicator decline In 1974-75, the ultimate bottom in the market was only a few months away. None of this means that we should totally disregard the behavior of the leading-indicator series, and, indeed, continued weakness would, on the record, be a cause for alarm. At the moment, however, in terms of actual Significance, It can be said, at best, to do nothing more than lend an element of uncertainty to the stock-market scene. While on the subject of numbers, Incidentally, we cannot resist drawing attention to one whfch'received a' gieatdeal-'l-e-s-s'attenticin'tha-w-dlCnh-e 'indicator- composite -OlfWed-nesaay; tne;;o, r- Financial Times Index of the London Market broke 500 on the upside for the first time since the e,,!rly 1970's. This has some Interest in view of the imperfect but reasonably well-documented tendency of this market to lead our own, albeit that this leadership tends to be more noticeable at tops than at bottoms. In the past, at least, declines in the United States market have not tended to be overly serious if the London market was expanding, and that It has certainly been doing, having risen from 265 last fall to Its current level. It will be Interesting to see whether the bull market currently being enjoyed by our friends across the ocean is ultimately transportable to our shores. Dow-Jones Industrials (1200 p.m.) S & P Composite (1200 p.m.) Cumulative Index (9/1/77) AWT/jb 867.Bl 97.04 662.74 ANTHONY W. TABELL DELAFIELD, HARVEY, TABELL No stotement or expression of opinion or any other matter herem contamed n, or IS 10 be deemed to be, directly or indirectly, an offer or the SOllCll0110n of on offer to buy or sell ony seoHily referred 10 or mentioned The mattelr IS presented merely for the converllence of the subscriber While e believe the sources of our Informo tlon 10 be relloble, we In no woy represent or guarontee the accurocy thereof nor of the stotements mude herein Any ocTlon to be token by the subscriber should be based on hiS own investigation and mformatlon Janney Montgomery Scoll, Inc, as a corporation, and 115 officers or employees, may now have, or may later lake, positions or trades In respf!ct to any seCUrities menlloned 1M thiS or ony future ISsue, and such posillon may be different from any views now or hereater evpressed In thiS or any other Inue Jonney Montgomery Scoll, Inc, which IS registered With thc SEC as an Investment adVisor, may give odvlce to Its Investment adVISOry ond olhel customers mdo!Jpendenlly of ony statements made 111 thiS or m ony other Issue Further Information on any security mentioned herem IS available on request