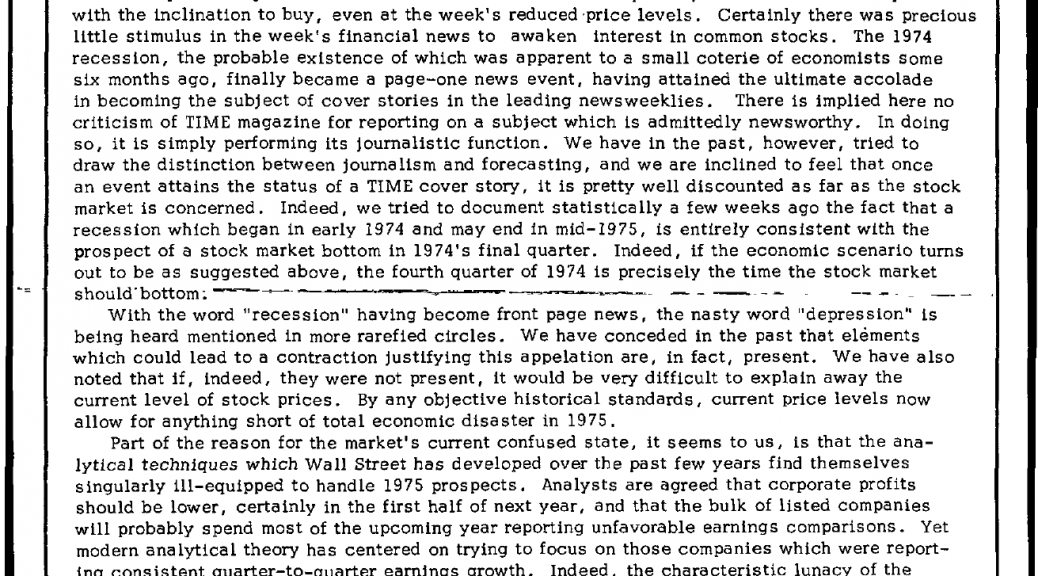 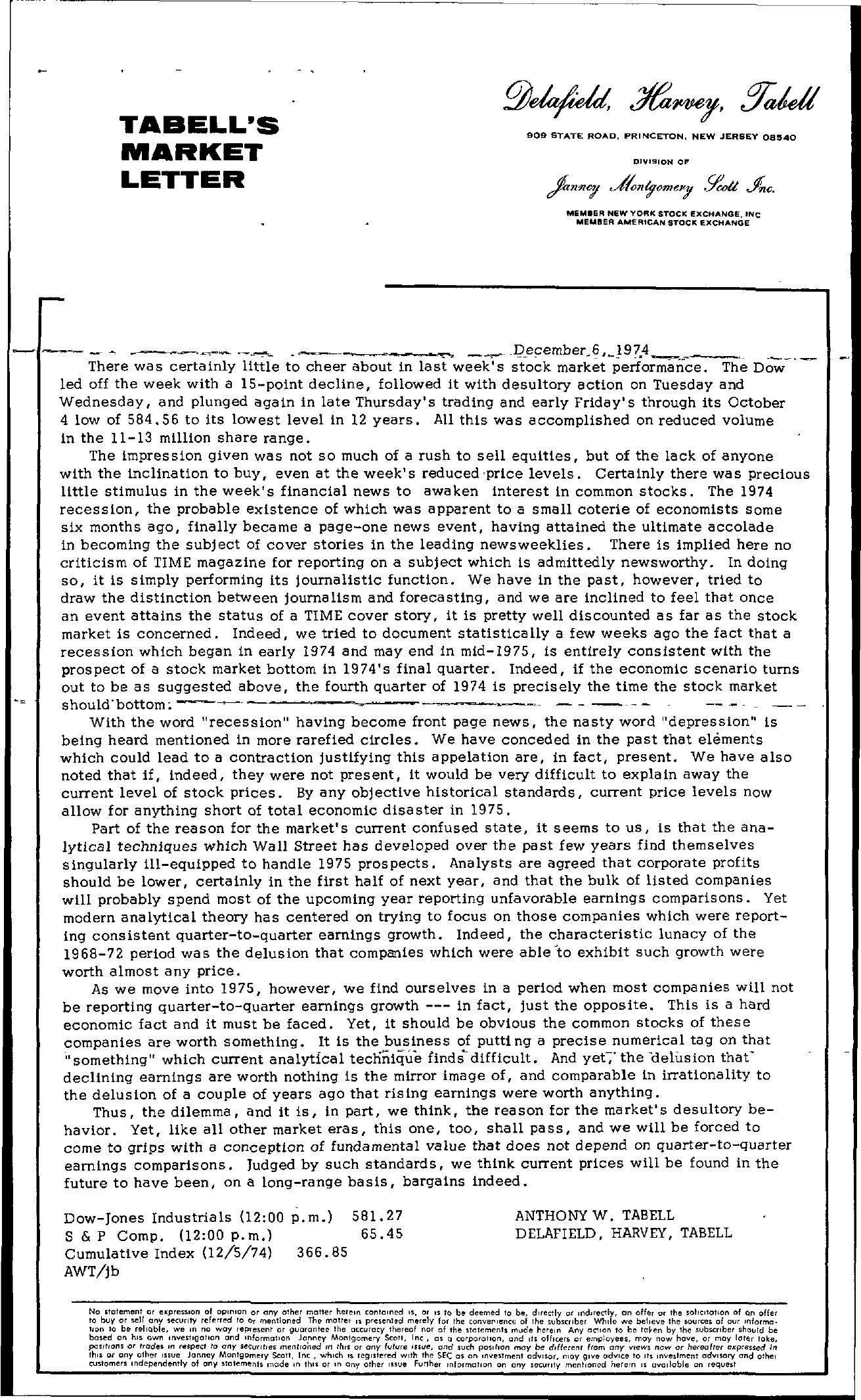 TABELL'S MARKET LETTER 909 STATE ROAD, PRINCETON, NEW JERSEY 081540 DIVISION OF MEMBER NEW YORK STOCK eXCHANGE, INC MEMBER AMERICAN STOCK EXCHANGE – – The-was c;-;inlY little tr about in lastweek's-'ae;ktt!d!rmaii-e-.-T'h-e- DC;;-'- led off the week with a IS-point decline, followed it with desultory action on Tuesday and Wednesday, and plunged again in late Thursday's trading and early Friday's through its October 4 low of 584.56 to its lowest level in 12 years. All this was accomplished on reduced volume in the 11-13 million share range. The impression given was not so much of a rush to sell equities, but of the lack of anyone with the inclination to buy, even at the week's reduced 'price levels. Certainly there was precious little stimulus in the week's financial news to awaken interest in common stocks. The 1974 recession, the probable existence of which was apparent to a small coterie of economists some six months ago, finally became a page-one news event, having attained the ultimate accolade in becoming the subJ ect of cover stories in the leading newsweeklies. There is implied here no criticism of TIME magazine for reporting on a subject which is admittedly newsworthy. In doing so, it is simply performing its journalistic function. We have in the past, however, tried to draw the distinction between journalism and forecasting, and we are inclined to feel that once an event attains the status of a TIME cover story, it is pretty well discounted as far as the stock market is concerned. Indeed, we tried to document statistically a few weeks ago the fact that a recession which began in early 1974 and may end in mid-1975, is entirely consistent with the prospect of a stock market bottom in 1974's final quarter. Indeed, if the economic scenario turns out to be as suggested above, the fourth quarter of 1974 is precisely the time the stock market should'bottom; –,— .– – – —- With the word recession having become front page news, the nasty word depression is being heard mentioned in more rarefied circles. We have conceded in the past that elements which could lead to a contraction justifying this appelation are, in fact, present. We have also noted that if, indeed, they were not present, it would be very difficult to explain away the current level of stock prices. By any objective historical standards, current price levels now allow for anything short of total economic disaster in 1975. Part of the reason for the market's current confused state, it seems to us, is that the ana- lytical techniques which Wall Street has developed over the past few years find themselves singularly ill-equipped to handle 1975 prospects. Analysts are agreed that corporate profits should be lower, certainly in the first half of next year, and that the bulk of listed companies will probably spend most of the upcoming year reporting unfavorable earnings comparisons. Yet modern analytical theory has centered on trying to focus on those companies which were report- ing consistent quarter-to-quarter earnings growth. Indeed, the characteristic lunacy of the 1968-72 period was the delusion that companies which were able'to exhibit such growth were worth almost any price. As we move into 1975, however, we find ourselves in a period when most companies will not be reporting quarter-to-quarter earnings growth — in fact, just the opposite. This is a hard economic fact and it must be faced. Yet, it should be obVious the common stocks of these companies are worth something. It is the business of putti ng a precise numerical tag on that something which current analytical technique finds difficult. And yet;' the -delus ion that' declining earnings are worth nothing is the mirror image of, and comparable in irrationality to the delusion of a couple of years ago that rising earnings were worth anything. Thus, the dilemma, and it is, in part, we think, the reason for the market's desultory be- havior. Yet, like all other market eras, this one, too, shall pass, and we will be forced to come to grips with a conception of fundamental value that does not depend on quarter-to-quarter earnings comparisons. Judged by such standards, we think current prices will be found in the future to have been, on a long-range basis, bargains indeed. Dow-Jones Industrials (1200 p.m.) 581.27 S & P Compo (1200 p.m.) 65.45 Cumulative Index (12/5/74) 366.85 AWT/jb ANTHONY W. TAB ELL DELAFIELD, HARVEY, TABELL No statement or expression of opInion or any other matter here,n contained IS, or , to be deemed to be. directly or mdlrectly, on offer Of Ihe SOIH;llohon of on offer to buy or sell /lny security referred 10 Or mentioned The matter IS presented merely for Ihe COnVef'lenCIl of the subscnber Wtnle we believe the sources of our Informo. t.on to be rellCJble, we m no woy represent or guarantee the accuracy thereof nor of the statements mude herem Any ac110n to be taen by Ihe subscnber shOuld be based on hiS own Investlgotlon and Information Janney Montgomery SCali. Inc, as a corporation, and lIs officers or employees, may now have, or moy later toke, positions or trades In respect to alty securities meMlaned lit thiS or any future 'Sue, and such posrtron may be drfferent from any views now or hereafter expressed In th.s or any other Issue Jonney Montgomery Scott, Inc. wtllch .s registered With the SEC as on .nvestment adVisor. may give adVice to Its mvestment adVISOry and other customers mdependently of any statements mode m thiS or In any other Issue Further InformatIOn on any security mentioned herein IS avarloble on request