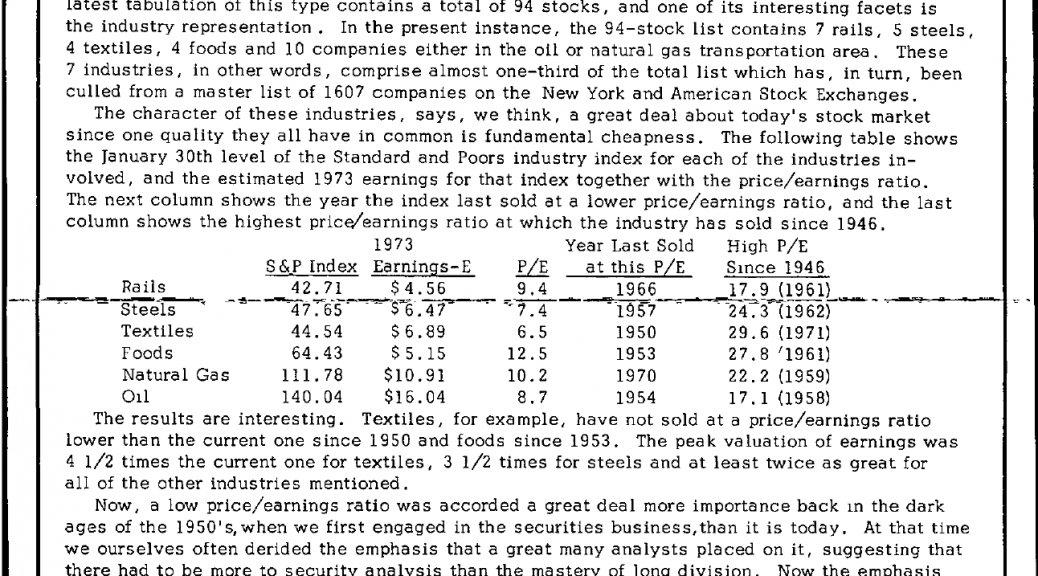 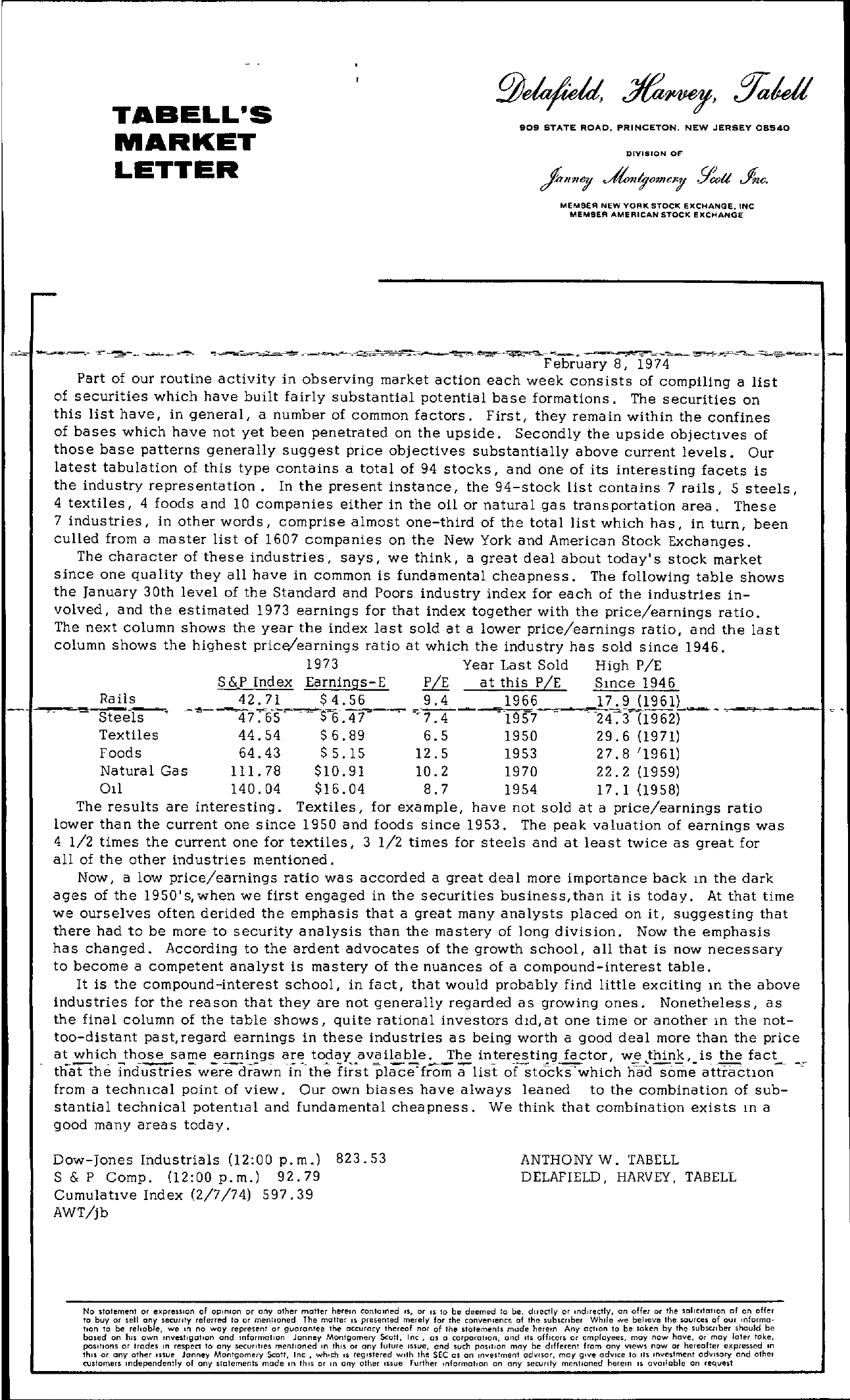 TABELL'S MARKET LETTER 909 STATE ROAD, PRINCETON, NEW JERSEY 08540 DIVISION OF MEMBER NEW YORK STOCK EXCHANGE, INC MEMBER AMERICAN STOCK EXCHANGE — — …. –..- …. …….—!i!'-…….., —.- … '- — ..-,; …….—- February 8, 1974 Part of our routine activity in observing market action each week consists of compiling a list of securities which have built fairly substantial potential base formations. The securities on this list have, in general, a number of common factors. First, they remain within the confines of bases which have not yet been penetrated on the upside. Secondly the upside objechves of those base patterns generally suggest price objectives substantially above current levels. Our latest tabulation of this type contains a total of 94 stocks, and one of its interesting facets is the industry representation. In the present instance, the 94-stock list contains 7 rails,S steels, 4 textiles, 4 foods and 10 companies either in the oil or natural gas transportation area. These 7 industries, in other words, comprise almost one-third of the total list which has, in turn, been culled from a master list of 1607 companies on the New York and American Stock Exchanges. The character of these industries, says, we think, a great deal about today's stock market since one quality they all have in common is fundamental cheapness. The following table shows the January 30th level of the Standard and Poors industry index for each of the industries in- volved, and the estimated 1973 earnings for that index together with the price/earnings ratio. The next column shows the year the index last sold at a lower price/earnings ratio, and the last column shows the highest price/earnings ratio at which the industry has sold since 1946. 1973 S&P Index Earnings-E Year Last Sold High PiE at this PiE Since 1946 Rails 42.71 4.56 9.4 1966 stee' -'-7-6r–6.47— '74- 1957 17.9(1961) 24.rT1962)— Textiles 44.54 6.89 6.5 1950 29.6 (1971) Foods 64.43 5.15 12.5 1953 27.8 '1961) Natural Gas 111.78 10.91 10.2 1970 22.2 (1959) 011 140.04 16.04 8.7 1954 17.1(1958) The results are interesting. Textiles, for example, have not sold at a price/earnings ratio lower than the current one since 1950 and foods since 1953. The peak valuation of earnings was 4 1/2 times the current one for textiles, 3 1/2 times for steels and at least twice as great for all of the other industries mentioned. Now, a low price/earnings ratio was accorded a great deal more importance back In the dark ages of the 1950's,when we first engaged in the securities business, than it is today. At that time we ourselves often derided the emphasis that a great many analysts placed on it, suggesting that there had to be more to security analysis than the mastery of long division. Now the emphasis has changed. According to the ardent advocates of the growth school, all that is now necessary to become a competent analyst is mastery of the nuances of a compound-interest table. It is the compound-interest school, in fact, that would probably find little exciting In the above industries for the reason that they are not generally regarded as growing ones. Nonetheless, as the final column of the table shows, quite rational investors dId, at one time or another In the not- too-distant past,regard earnings in these industries as being worth a good deal more than the price placefromat which those same earnings are today available. The interesting factor, we think, is the fact thaTthe tnd-U'STries-were-drawn Tn–the -first alist ofstocks-'which hadsom; attractlon– from a techmcal pOint of view. Our own biases have always leaned to the combination of sub- stantial technical potenhal and fundamental cheapness. We think that combination exists In a good many areas today. Dow-Jones Industrials (1200 p.m.) S&P Compo (l200p.m.) 92.79 Cumulahve Index (2/7/74) 597.39 AWT/jb 823.53 ANTHONY W. TABELL DELAFIELD, HARVEY, TAB ELL No statement or expreulon of opinion or any other motter herein contolned IS, or IS to be deemed 10 be, dtrectly or Indirectly, en offer or the ollcllotlon of on offer to buy or sell any security referred 10 or mentIOned The molter IS presented merely for the conve,enct of the subscriber While we believe the Ources of our Informahan to be reliable, we In no way represent or guarantee the occurocy thereof nor of the statemenls mude herein Any aellon to be token by the subflber should be based on hIS own investigation and information Jonney Montgomery Seott, Inc, as 0 corporotlon, and Its officers or employees, may now have, or may loter toke, POSitiOns or trades In respect to any secufltles mentioned In thiS or any future Issue, and such pOSItIon may be ddferent from any vIews now or hereafter expressed In thiS or any other ISsue Janney Montgomery Scott, Inc, wh,ch IS registered With the SEC os on investment odvisor, moy gIVe adVice to Its Investment odvlsory and othEl! customers Independently of ony statements mode In thiS or In any other Issue Further informatIOn on any security mentIOned herein IS available on request