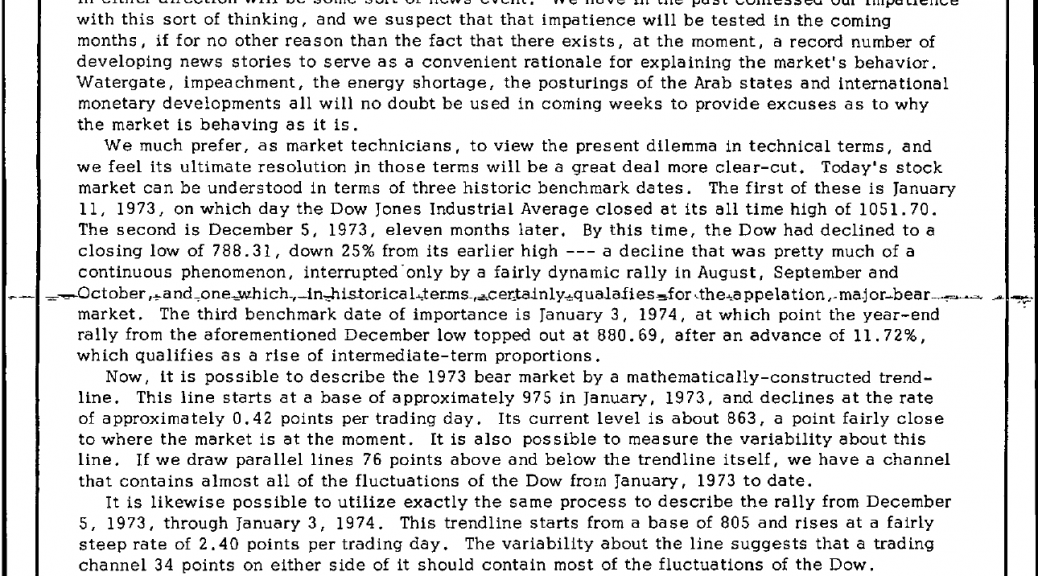 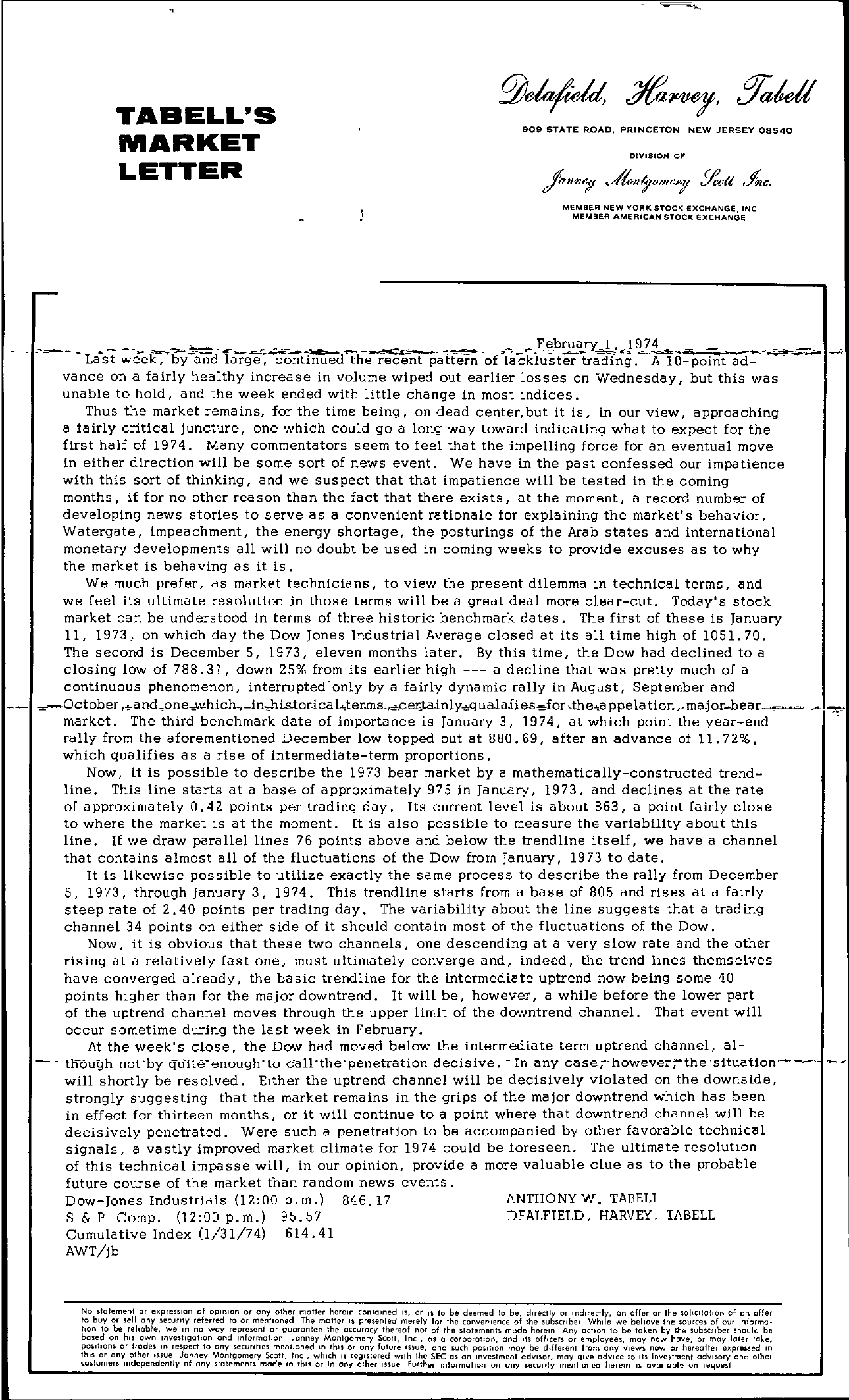 TABELL'S MARKET LETTER 909 STATE ROAD, PRINCETON NEW JERSEY 08540 DIVISION OF MEMBER NEW YORK STOCK EXCHANGE, INC MEMBER AMERICAN STOCK eXCHANGE —Last-;eebYci larg';,c;o;;-tinedthe rent paftern 'of lack!!t;;Jit97i;–lopoint act -. -k vance on a fairly healthy increase in volume wiped out earlier losses on Wednesday, but this was unable to hold, and the week ended with little change in most indices. Thus the market remains, for the time being, on dead center,but it is, in our view, approaching a fairly critical Juncture, one which could go a long way toward indicating what to expect for the first half of 1974. Many commentators seem to feel that the impelling force for an eventual move in either direction will be some sort of news event. We have in the past confessed our impatience with this sort of thinking, and we suspect that that impatience will be tested in the coming months, if for no other reason than the fact that there exists, at the moment, a record number of developing news stories to serve as a convenient rationale for explaining the market's behaViOr. Watergate, impeachment, the energy shortage, the posturings of the Arab states and international monetary developments all will no doubt be used in coming weeks to provide excuses as to why the market is behaving as it is. We much prefer, as market technicians, to view the present dilemma in technical terms, and we feel its ultimate resolution in those terms will be a great deal more clear-cut. Today's stock market can be understood in terms of three historic benchmark dates. The first of these is January II, 1973, on which day the Dow Jones Industrial Average closed at its all time high of 1051.70. The second is December 5, 1973, eleven months later. By this time, the Dow had declined to a closing low of 788.31, down 25 from its earlier high — a decline that was pretty much of a continuous phenomenon, interrupted 'only by a fairly dynamic rally in August, September and October ,.,.a ndoonewhich.,in.histor,ica lter.ms.,,,,cel;talnly..qualafies,,,for ,thea ppela tion maJorbear .,., market. The third benchmark date of importance is January 3, 1974, at which point the year-end rally from the aforementioned December low topped out at 880.69, after an advance of ll. 72, which qualifies as a rise of intermediate-term proportions. Now, it is possible to describe the 1973 bear market by a mathematically-constructed trend- line. This line starts at a base of approximately 975 in January, 1973, and declines at the rate of approximately 0.42 pOints per trading day. Its current level is about 863, a pOint fairly close to where the market is at the moment. It is also possible to measure the variability about this line. If we draw parallel lines 76 points above and below the trend line itself, we have a channel that contains almost all of the fluctuations of the Dow from January, 1973 to date. It is likewise possible to utilize exactly the same process to describe the rally from December 5, 1973, through January 3, 1974. This trendline starts from a base of 805 and rises at a fairly steep rate of 2.40 points per trading day. The variability about the line suggests that a trading channel 34 pOints on either side of it should contain most of the fluctuations of the Dow. Now, it is obvious that these two channels, one descending at a very slow rate and the other rising at a relatively fast one, must ultimately converge and, indeed, the trend lines themselves have converged already, the basic trendline for the intermediate uptrend now being some 40 pOints higher than for the major downtrend. It will be, however, a while before the lower part of the uptrend channel moves through the upper limit of the downtrend channel. That event will occur sometime during the last week in February. At the week's close, the Dow had moved below the intermediate term uptrend channel, al- tlfough not'by qU1te-enough'to call'the'penetration decisive .. In any case;–however;'the'situation'— will shortly be resolved. EIther the uptrend channel will be decisively violated on the downside, strongly suggesting that the market remains in the grips of the major downtrend which has been in effect for thirteen months, or it will continue to a point where that downtrend channel will be decisively penetrated. Were such a penetration to be accompanied by other favorable technical Signals, a vastly improved market climate for 1974 could be foreseen. The ultimate resolutlOn of this technical impasse will, in our opinion, provide a more valuable clue as to the probable future course of the market than random news events. Dow-Jones Industrials (1200 p.m.) 846.17 S & P Compo (1200 p.m.) 95.57 ANTHO NY W. TABELL DEALFIELD, HARVEY, TABELL Cumulative Index (1/31/74) 614.41 AWT/jb No statement or expreulon of opinion or any other maHer herem contOined IS, or IS to be deemed to be, directly or ,nd,rectly, an offer or Ihe soitcltatlon of on offer to buy or sell ony security referred to or mentIOned The mOllcr IS presented merely for Ihe converlenc of the subscriber While -Ne bellev!! the sources of our InformatIOn 10 be rehable, we In no way represent or guarantee the accuracy thereof nor of the statements mude herein Any action 10 be toen by the SUbSCflber should be based on hiS own InvestigatIOn and Informotlon Janney Montgomery Scott, Inc, as a corporation, and Its officers or employees, may now have, Of may later toe, pOII,ons or hades In respect to any securities mentioned In thiS or any future Issue, and such pOSIlon moy be different from any views now or hereafter expressed In thiS or any other Issue JO'1ney Montgomery Scott, Inc, which IS registered With the SEC as on Investment adVisor, may give adVICe 10 IS Investment adVISOry and othel customers Independently of any slotements mode In thiS or In any other Issue Further Information on any sectHily mentioned herem IS aVailable on request