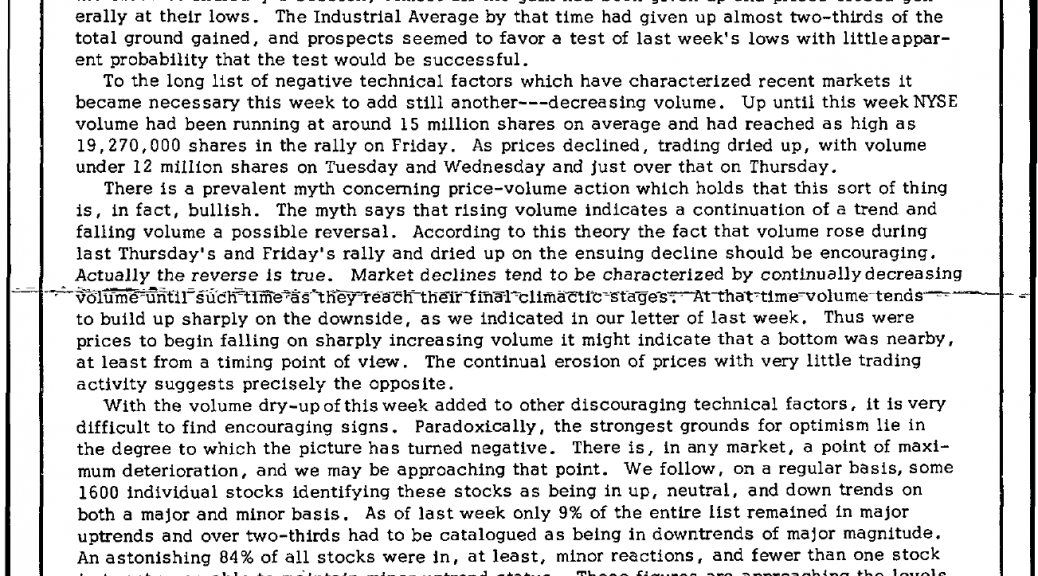 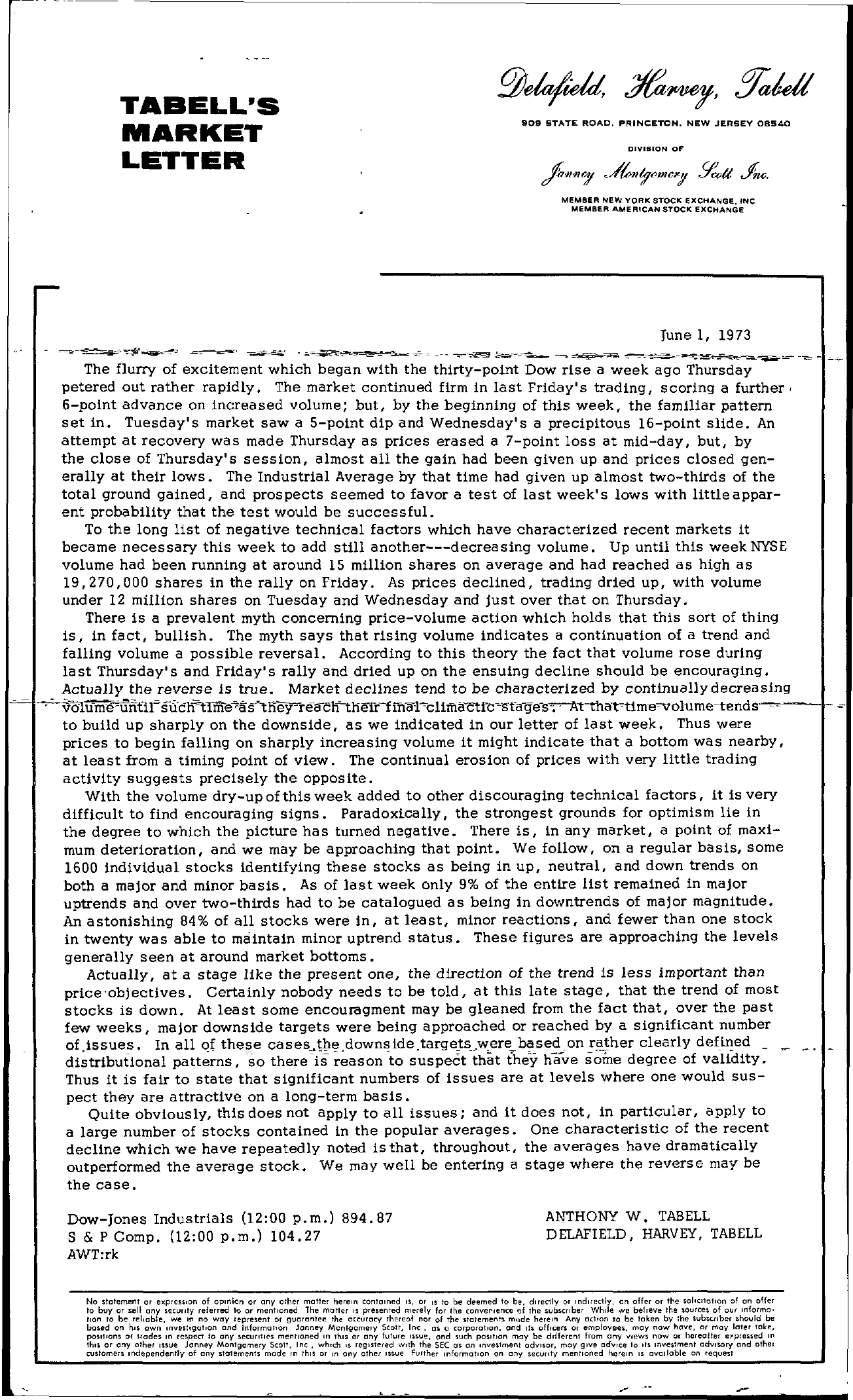 TABELL'S MARKET LETTER 909 STATE ROAD, PRINCETON. NEW JERSEY 08540 DIVISION OF MEMBER NEW YORK STOCK EXCHANGE, INC MEMBER AMERICAN STOCK EXCHANGE . , . –..–!,,, —-'' -;;j-'t;;' —-Z June I, 1973 —r- – ;S' '—–. s;– — —-;., ……. The flurry of excitement which began with the thirty-point Dow rise a week ago Thursday petered out rather rapidly. The market continued firm in last Friday's trading, scoring a further, 6-point advance on increased volume; but, by the beginning of this week, the familiar pattern set in. Tuesday's market saw a 5-point dip and Wednesday's a precipitous 16-point slide. An attempt at recovery was made Thursday as prices erased a 7-point loss at mid-day, but, by the close of Thursday's session, almost all the gain had been given up and prices closed gen- erally at their lows. The Industrial Average by that time had given up almost two-thirds of the total ground gained, and prospects seemed to favor a test of last week's lows with littleappar- ent probability that the test would be successful. To the long list of negative technical factors which have characterized recent markets it became necessary this week to add still another—decreasing volume. Up until this week NYSE volume had been running at around 15 million shares on average and had reached as high as 19,270,000 shares in the rally on Friday. As prices declined, trading dried up, with volume under 12 million shares on Tuesday and Wednesday and just over that on Thursday. There is a prevalent myth concerning price-volume action which holds that this sort of thing is, in fact, bullish. The myth says that rising volume indicates a continuation of a trend and falling volume a possible reversal. According to this theory the fact that volume rose during last Thursday's and Friday's rally and dried up on the ensuing decline should be encouraging. Actually the reverse is true. Market declines tend to be characterized by continually decreasing I -,-'-O-l\fme;uitfilsllclf'tlmeas'tfiey-rea-chtlieil'ImalclimactrcsTage-sAt-thattime7volume-tends- – to build up sharply on the downside, as we indicated in our letter of last week. Thus were prices to begin falling on sharply increasing volume it might indicate that a bottom was nearby, at least from a timing point of view. The continual erosion of prices with very little trading activity suggests precisely the opposite. With the volume dry-up ofthis week added to other discouraging technical factors, it is very difficult to find encouraging signs. Paradoxically, the strongest grounds for optimism lie in the degree to which the picture has turned negative. There is, in any market, a point of maxi- mum deterioration, and we may be approaching that point. We follow, on a regular basiS, some 1600 individual stocks identifying these stocks as being in up, neutral, and down trends on both a major and minor basis. As of last week only 9 of the entire list remained in major uptrends and over two-thirds had to be catalogued as being in downtrends of major magnitude. An astonishing 84 of all stocks were in, at least, minor reactions, and fewer than one stock in twenty was able to maintain minor uptrend status. These figures are approaching the levels generally seen at around market bottoms. Actually, at a stage like the present one, the direction of the trend is less important than price'objectives. Certainly nobody needs to be told, at this late stage, that the trend of most stocks is down. At least some encouragment may be gleaned from the fact that, over the past few weeks, major downSide targets were being approached or reached by a significant number of.!ssues. In all of these cases.the.downside.targets,were basedon rather clearly defied ,, distributional patterns, 'so there 'is eason -to suspect that they have some degree of validity. Thus it is fair to state that significant numbers of issues are at levels where one would sus- pect they are attractive on a long-term basis. Quite obviously, this does not apply to all issues; and it does not, in particular, apply to a large number of stocks contained in the popular averages. One characteristic of the recent decline which we have repeatedly noted is that, throughout, the averages have dramatically outperformed the average stock. We may well be entering a stage where the reverse may be the case. Dow-Jones Industrials (1200 p.m.) 894.87 S & P Compo (1200 p.m.) 104.27 AWTrk ANTHONY W. TAB ELL DELAFIELD, HARVEY, TAB ELL No stalemenl or expressIOn of opinion or any other mOiler herein contOlned IS, or IS to be deemed to be, directly or Indirectly, on offer or the solicllollon of on offer 10 buy or sell ony security referred 10 or mentioned The motter IS presented merely for the converlence of the subScriber While oNe believe the Ource of our Informotlon to be rehable, we In no way represent or guarantee the accurocy thereof nor of the statements mude herein Any ochon to be taken by the subSCriber should be based on hiS own Invesllgatlon and Information Jonney Montgomery Scott, Inc, as a corporation, and lIs of/lcers or employees, may now hove, or may later toke, positions ar trades In respect to any securities mentioned In thiS or ony future Issue, end such poslt,on may be different from any views now or hereofter eypressed In thiS or ony other Issue Jonney Montgomery Sc01l, Inc, wh'ch .s registered With the SEC os on Investment adVisor, moy give adVice to Its Investment adVISOry and othel O)stomers Independently of any staTemenTs mode In thiS or In ony other Issue Further information on any security mentioned herein IS available on request