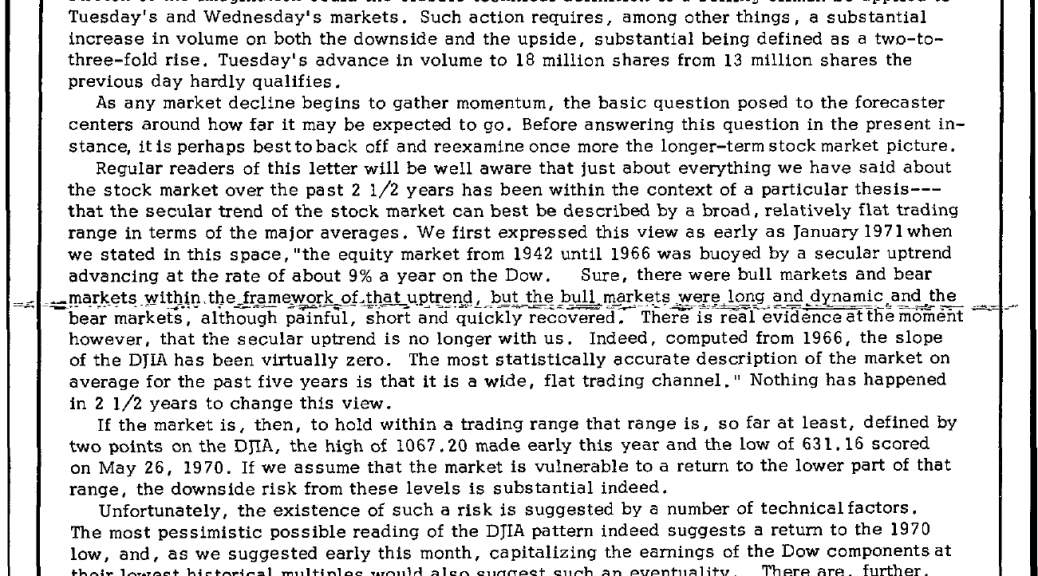 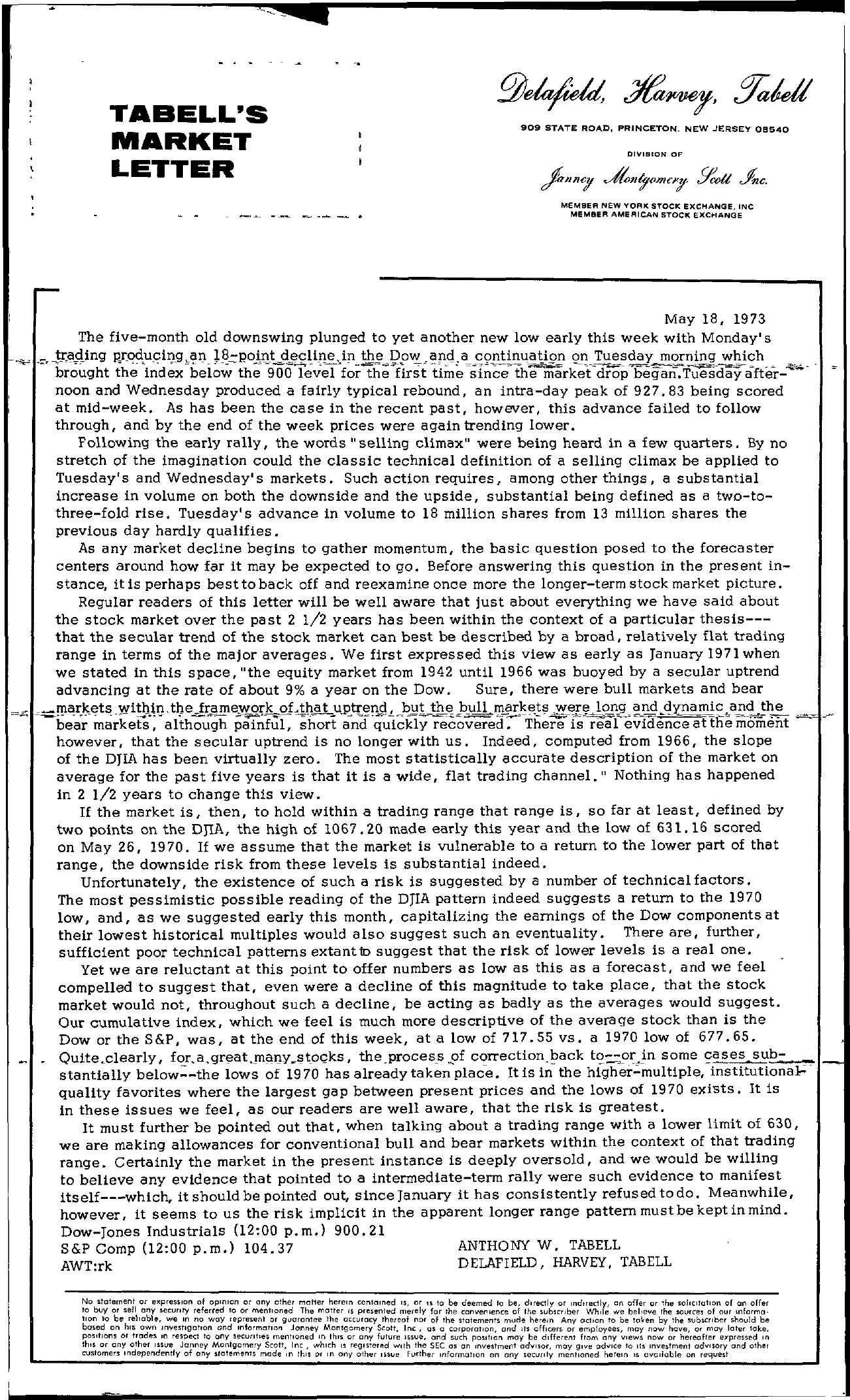 , , -, – -, . -. , TABELL'S , MARKET \ LETTER ,,, ,. . ……..- . – ' – ' — . . 909 STATE ROAD, PRINCETON. NEW JERSEY 08540 DIYISION OF MEMBER NEW VORl( STOCK eXCHANGE, INC MEMBER AMERICAN STOCK EXCHANGE May 18, 1973 The five-month old downswing plunged to yet another new low early this week with Monday's II,t,ras!ing Rlod,uiry9,-(ln, Lpo.\ltAecline)n thE'! ,D,o,(lnd.a c,mtinuat.ign gn Tuesday morning which brought the index below the 90iJi'evel fortheflrst time since-thenlarket(irop-began.Tuesday-after—- – – noon and Wednesday produced a fairly typical rebound, an intra-day peak of 927.83 being scored at mid-week. As has been the case in the recent past, however, this advance failed to follow through, and by the end of the week prices were again trending lower. Following the early rally, the words selling climax were being heard in a few quarters. By no stretch of the imagination could the classic technical definition of a selling climax be applied to Tuesday's and Wednesday's markets. Such action requires, among other things, a substantial increase in volume on both the downside and the upside, substantial being defined as a two-to- three-fold rise. Tuesday's advance in volume to 18 million shares from 13 million shares the previous day hardly qualifies. As any market decline begins to gather momentum, the basic question posed to the forecaster centers around how far it may be expected to go. Before answering this question in the present in- stance, it is perhaps best to back off and reexamine once more the longer-term stock market picture. Regular readers of this letter will be well aware that just about everything we have said about the stock market over the past 2 1/2 years has been within the context of a particular thesis— that the secular trend of the stock market can best be described by a broad, relatively flat trading range in terms of the major averages. We first expressed this view as early as Tanuary 1971 when we stated in this space, the equity market from 1942 until 1966 was buoyed by a secular uptrend advancing at the rate of about 9 a year on the Dow. Sure, there were bull markets and bear …; ml'lrk,!,it.9.\I) tefIJ!me;9Jkof.-t\lat yp.ttnc!LbJ!Lb,ull rIJ!kEl!s-Jl2 and!ynamical'd t bear markets, although painful, short and quickly recovered. There is real evidence at the moment 1. however, that the secular uptrend is no longer with us. Indeed, computed from 1966, the slope of the DTIA has been virtually zero. The most statistically accurate description of the market on average for the past five years is that it is a wide, flat trading channel. Nothing has happened in 2 1/2 years to change this view. If the market is, then, to hold within a trading range that range is, so far at least, defined by two points on the DTIA, the high of 1067.20 made early this year and the low of 631.16 scored on May 26, 1970. If we assume that the market is vulnerable to a return to the lower part of that range, the downside risk from these levels is substantial indeed. Unfortunately, the existence of such a risk is suggested by a number of technical factors. The most pessimistic possible reading of the DTIA pattern indeed suggests a return to the 1970 low, and, as we suggested early this month, capitalizing the earnings of the Dow components at their lowest historical multiples would also suggest such an eventuality. There are, further, sufficient poor technical patterns extant 10 suggest that the risk of lower levels is a real one. Yet we are reluctant at this point to offer numbers as low as this as a forecast, and we feel compelled to suggest that, even were a decline of this magnitude to take place, that the stock market would not, throughout such a decline, be acting as badly as the averages would suggest. OUT cumulative index, which we feel is much more descriptive of the average stock than is the Dow or the S&P, was, at the end of this week, at a low of 717.55 vs. a 1970 low of 677.65 . . Quite.clearly, fr.a.great.ll!I)ystoQks, theprocess of correctionilack t();or)n some cb- stantially below–the lows of 1970 has already taken plac'e. ltis in the higher''multiple, institutionaj,– quality favorites where the largest gap between present prices and the lows of 1970 exists. It is in these issues we feel, as our readers are well aware, that the risk is greatest. It must further be pointed out that, when talking about a trading range with a lower limit of 630, we are making allowances for conventional bull and bear markets within the context of that trading range. Certainly the market in the present instance is deeply oversold, and we would be willing to believe any eVidence that pOinted to a intermediate-term rally were such evidence to manifest itself—which. it should be pOinted out, since Tanuary it has consistently refused to do. Meanwhile, however, it seems to us the risk impliCit in the apparent longer range pattern must be kept in mind. Dow-Tones Industrials (1200 p. m.) 900.21 S&P Comp (1200 p.m.) 104.37 AWTrk ANTHONY W. TABELL DELAFIELD, HARVEY, TABELL No statement or expression of opinion or any other maHer herein contained IS, or IS to be deemed to be, directly or ,ndirectly, an offer or the soliCitatIOn of an offer to buy or sell any security referred to or mentIOned The mailer IS presented merely for the convellence of the subSCriber While we believe the sources of our ,nformatlon to be reliable, we In no way represent or guarantee the accuracy thereof nor of the statements mude herein Any action to be talc en by the subSCriber should be based on hiS own investigatIOn Gnd Information Janney Montgomery Scott, Inc, as a corporaTion, and Its officers or employees, may now have, or may later toke, POSitions or trades In respect to any secunhes mentioned In thiS or any future ISSUe, and such posilion may be different from any Views now or hereafter eypressed In thIS or any other Issue Janney Montgomery Scotl, Inc, which IS registered with the SEC as on Investment adVisor, may gIVe adVice to lIs Investment adVisory and other customers ,ndependently of any statements made ,n thiS or In any other Issue Further information on any secvnty mentioned herein IS available on request I