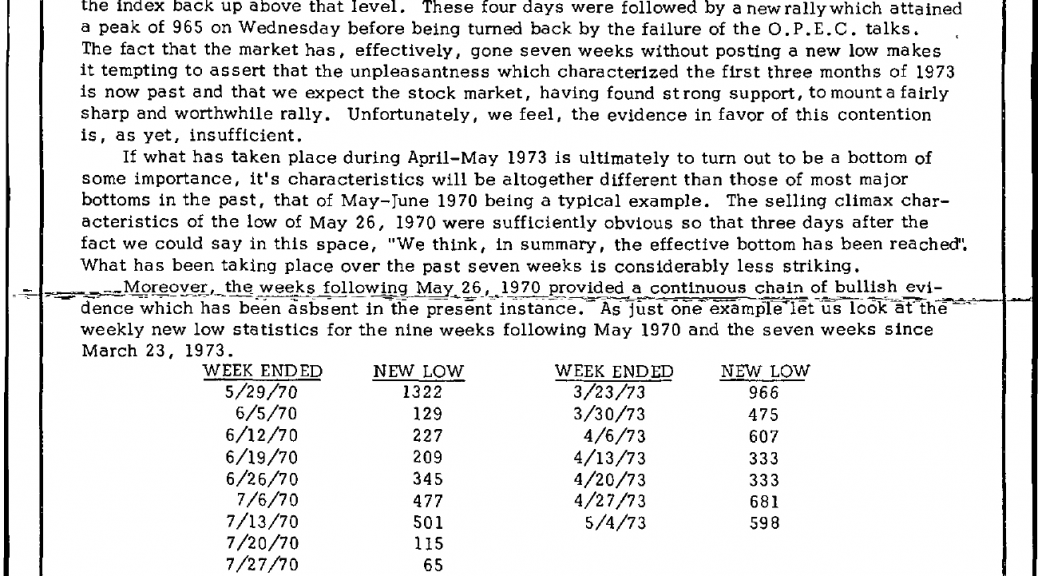 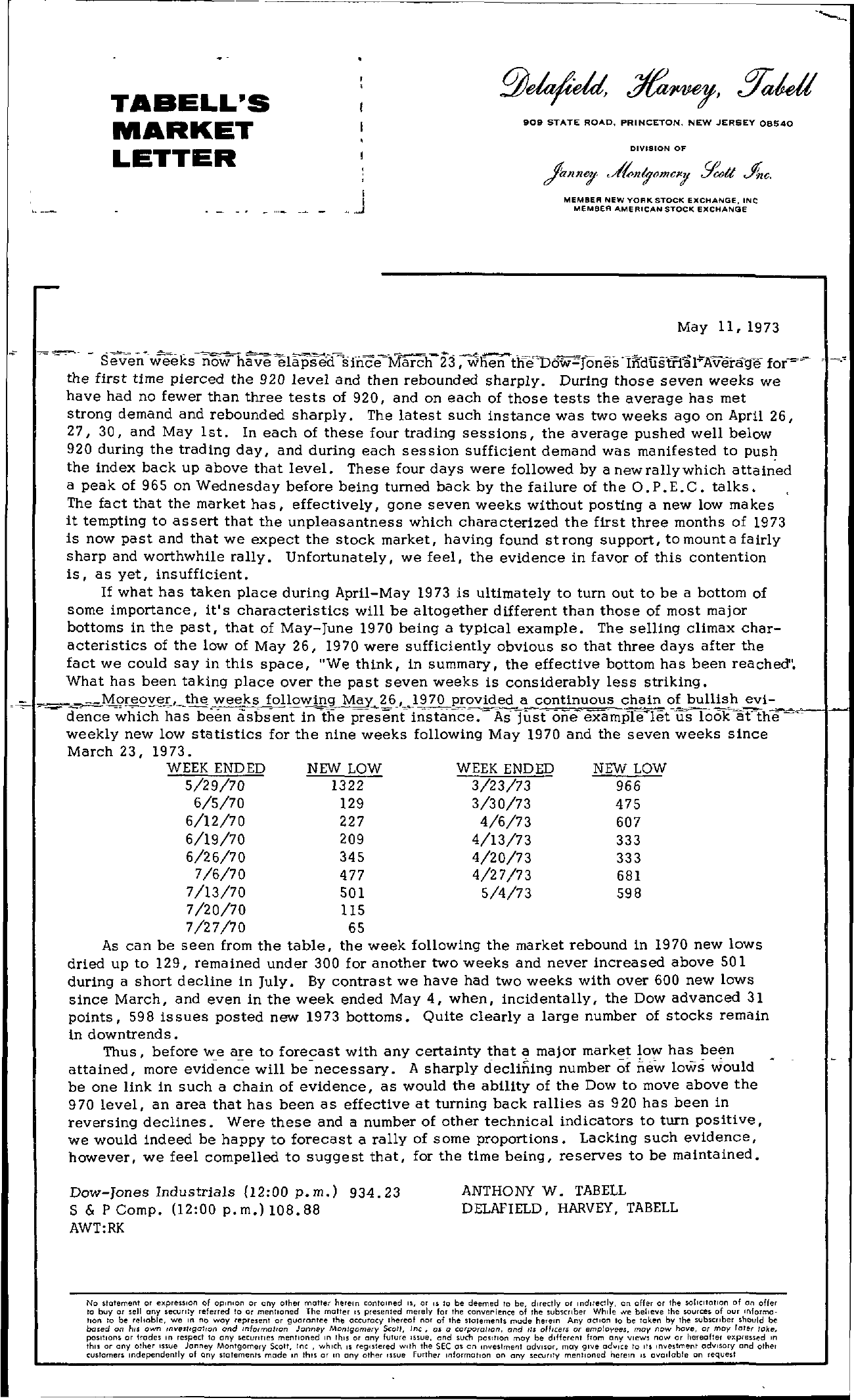 TABELL'S MARKET LETTER I .J 909 STATE ROAD, PRINCETON, NEW JERSEY 08640 DIVISION OF MEMBER NEW YOAK STOCK EXCHANGE, INC MEMBER AMERICAN STOCK EXCHANGE May 11, 1973 – – Seven'';-eeks-nowhave elap5e'crsrnceMar6h-2i, vJnen tJ1eTI6wJones-ltrdustrlalAverage- for- -. the first time pierced the 920 level and then rebounded sharply. During those seven weeks we have had no fewer than three tests of 920, and on each of those tests the average has met strong demand and rebounded sharply. The latest such instance was two weeks ago on April 26, 27, 30, and May 1st. In each of these four trading sessions, the average pushed well below 920 during the trading day, and during each session sufficient demand was manifested to push the index back up above that level. These four days were followed by a new rally which attaied a peak of 965 on Wednesday before being turned back by the failure of the O. p. E. C. talks. The fact that the market has, effectively, gone seven weeks without posting a new low makes it tempting to assert that the unpleasantness which characterized the first three months of 1973 is now pa st and that we expect the stock market, having found st rong support, to mount a fairly sharp and worthwhile rally. Unfortunately, we feel, the eVidence in favor of this contention is, as yet, insuffiCient. If what has taken place during April-May 1973 is ultimately to turn out to be a bottom of some importance, it's characteristics will be altogether different than those of most major bottoms in the past, that of May-June 1970 being a typical example. The selling climax char- acteristics of the low of May 26, 1970 were sufficiently obVious so that three days after the fact we could say in this space, We think, in summary, the effective bottom has been reached' What has been taking place over the past seven weeks is considerably less striking. – M-,)re()L,the weeks ollow!!, May 6,170 !.!ovided a continous chain ()t!2.'!.lishi- dence which has been asbsent in the present instance. As- just one- example-let us lookaCtne — weekly new low statistics for the nine weeks following May 1970 and the seven weeks since March 23, 1973. WEEK ENDED NEW LOW WEEK ENDED NEW LOW 5/29/70 1322 3/23/73 966 6/5/70 129 3/30/73 475 6/12/70 6/19/70 227 209 4/6/73 4/13/73 607 333 6/26/70 345 4/20/73 333 7/6/70 477 4/27/73 681 7/13/70 7/20/70 501 115 5/4/73 598 7/27/70 65 As can be seen from the table, the week following the market rebound in 1970 new lows dried up to 129, remained under 300 for another two weeks and never increased above 501 during a short decline in July. By contrast we have had two weeks with over 600 new lows since March, and even in the week ended May 4, when, incidentally, the Dow advanced 31 pOints, 598 issues posted new 1973 bottoms. Quite clearly a large number of stocks remain in downtrends. Thus, before we are to forecast with any certainty that a major market low has been attained, more eVid-ence will be-necessary. A sharply declining number of ne; lows would be one link in such a chain of evidence, as would the ability of the Dow to move above the 970 level, an area that has been as effective at turning back rallies as 920 has been in reversing declines. Were these and a number of other technical indicators to turn positive, we would indeed be happy to forecast a rally of some proportions. Lacking such evidence, however, we feel compelled to suggest that, for the time being, reserves to be maintained. Dow-Jones Industrials (1200 p. m.) 934.23 S & P Compo (1200 p.m.) 108.88 AWTRK ANTHONY W. TABELL DELAFIELD, HARVEY, TABELL No statement or expression of opinion or cny other matter herein contolned 15, or IS 10 be deemed 10 be, directly or Indirectly, an offer or the solu;ltotlon of on offer to buy or sell any security referred to or menlloned the mOiler 15 presented merely for the converlence of the subSCriber While oNe believe Ihe sources of our Informolion to be rIllOble, we m no way represenl or guarantee the occurocy thereof nor of the Slolements mude herem Any octlon to be token by Ihe subSCriber should be based on hiS own mvestlgotlon end mformatlon Janney Montgomery l;olt, Inc, os a corpora/Ion, and I/S officers or employees, moy now hove, or may later lake, positions or trades In respect 10 any seCUrities mentioned m thiS or any future Issue, ond such position may be different from any views now or hereofter expressed In thiS or ony other Issue Janney Montgomery Scott, Inc, which IS registered With the SEC as on Investment adVisor, may give adVice to Its Investment adVisory and othel customers Independently of cny statements mode ,n thIS or In any other Issue Further InformatIOn on any security mentioned herem IS available on request