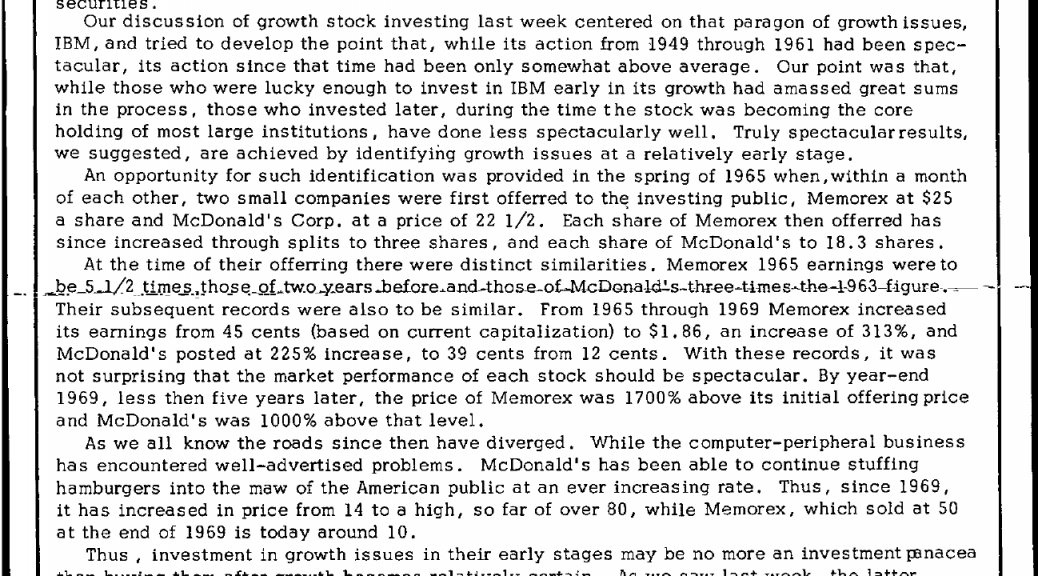 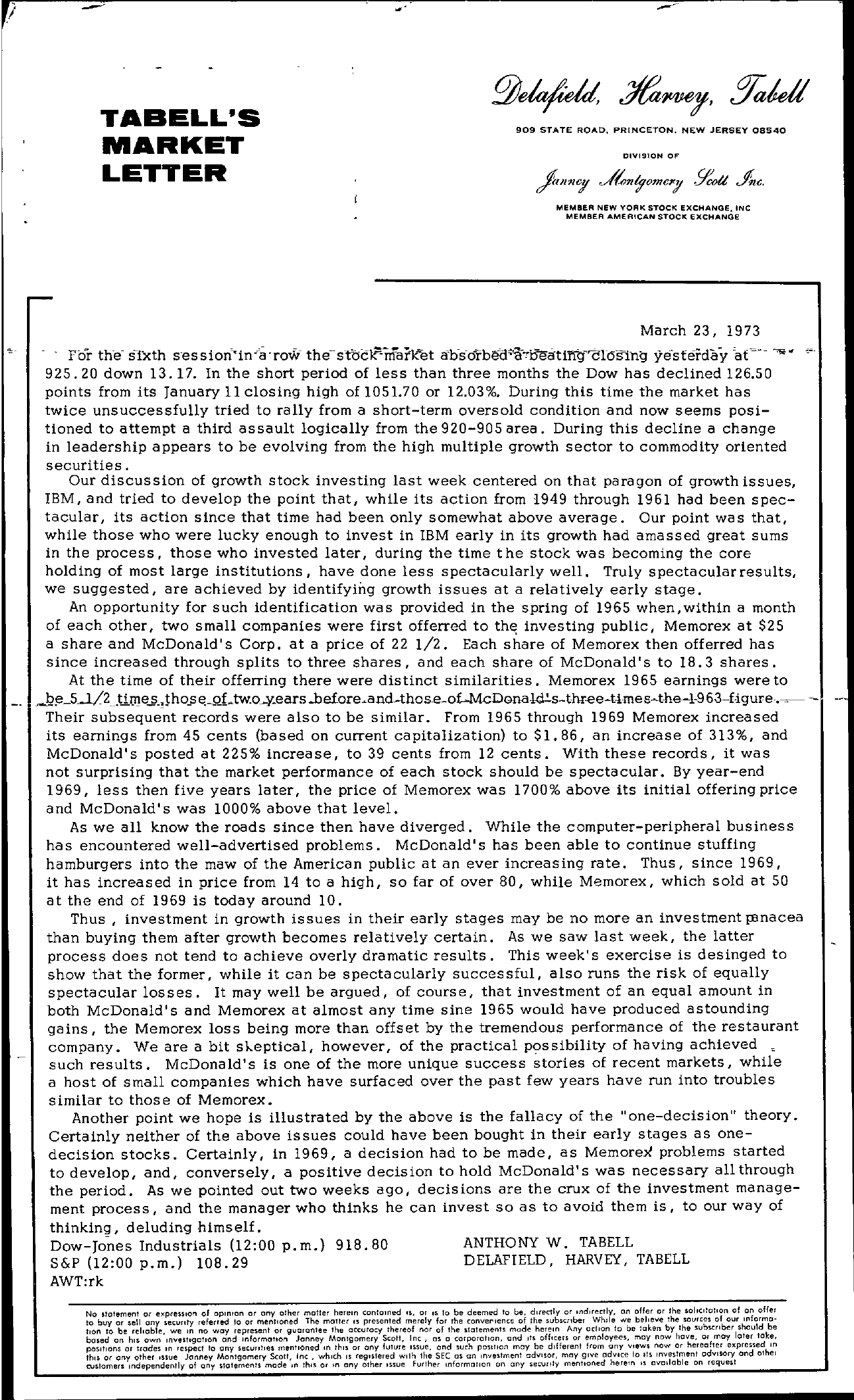 – TABELL'S MARKET LETTER – 909 STATE ROAD, PRINCETON. NEW JERSEY 08540 DIVISION OF' MEMBER NEW VORK. STOCK EXCHANGE. INC MEMBER AMERICAN STOCK eXCHANGE March 23, 1973 FOr thef sTxth s-essionina-row- the-stbcrrratket ifbs-otbeQaliea-ttng-'Cr('fsing yesferday cae 925.20 down 13.17. In the short period of less than three months the Dow has declined 126.50 points from its January 11 closing high of 1051.70 or 12.03. During this time the market has twice unsuccessfully tried to rally from a short-term oversold condition and now seems posi- tioned to attempt a third assault logically from the 920-905 area. During this decline a change in leadership appears to be evolving from the high multiple growth sector to commodity oriented securities. Our discussion of growth stock investing last week centered on that paragon of growth issues, IBM, and tried to develop the point that, while its action from 1949 through 1961 had been spec- tacular, its action since that time had been only somewhat above average. Our point was that, while those who were lucky enough to invest in IBM early in its growth had amassed great sums in the process, those who invested later, during the time t he stock was becoming the core holding of most large institutions, have done less spectacularly well. Truly spectacular results, we suggested, are achieved by identifying growth issues at a relatively early stage. An opportunity for such identification was provided in the spring of 1965 when,within a month of each other, two small companies were first offerred to the investing public, Memorex at 25 a share and McDonald's Corp. at a price of 22 1/2. Each share of Memorex then offerred has since increased through splits to three shares, and each share of McDonald's to 18.3 shares. At the time of their offerring there were distinct similarities. Memorex 1965 earnings were to –!;!,,5..l/2t;il)1e…thosE'l-QLtwoyears.before.and-those..of-.McDGna-1-d-'–s-thr-eet-imesthe-1-963-f-igure-.– – Their subsequent records were also to be similar. From 1965 through 1969 Memorex increased its earnings from 45 cents (based on current capitalization) to 1. 86, an increase of 313, and McDonald's posted at 225 increase, to 39 cents from 12 cents. With these records, it was not surprising that the market performance of each stock should be spectacular. By year-end 1969, less then five years later, the price of Memorex was 1700 above its initial offering price and McDonald's was 1000 above that level. As we all know the roads since then have diverged. While the computer-peripheral business has encountered well-advertised problems. McDonald's has been able to continue stuffing hamburgers into the maw of the American public at an ever increasing rate. Thus, since 1969, it has increased in price from 14 to a high, so far of over 80, while Memorex, which sold at 50 at the end of 1969 is today around 10. Thus, investment in growth issues in their early stages may be no more an investment pmacea than buying them after growth becomes relatively certain. As we saw last week, the latter process does not tend to achieve overly dramatic results. This week's exercise is desinged to show that the former, while it can be spectacularly successful, also runs the risk of equally spectacular losses. It may well be argued, of course, that investment of an equal amount in both McDonald's and Memorex at almost any time sine 1965 would have produced astounding gains, the Memorex loss being more than offset by the tremendous performance of the restaurant company. We are a bit skeptical, however, of the practical possibility of having achieved such results. McDonald's is one of the more unique success stories of recent markets, while a host of small companies which have surfaced over the past few years have run into troubles similar to thos e of Memorex. Another point we hope is illustrated by the above is the fallacy of the one-decision theory. Certainly neither of the above issues could have been bought in their early stages as one- decision stocks. Certainly, in 1969, a decision had to be made, as Memorex problems started to develop, and, conversely, a positive decision to hold McDonald's was necessary all through the period. As we pointed out two weeks ago, decisions are the crux of the investment manage- ment process, and the manager who thinks he can invest so as to avoid them is, to our way of thinking, deluding himself. Dow-Jones Industrials (1200 p.m.) 918.80 S&P (1200 p.m.) 108.29 ANTHONY W. TABELL DELAFIELD, HARVEY, TABELL AWTrk No stotement or e)(preSlon of opinion or ony other molter herein contained '5, or IS to be deemed 10 be, directly or .nd,rectly, on offer or Ihe sollCltollon of on offer to buy or sell ony security referred to or mentioned The moTler IS presented merely for the conver-Ience of the subSCriber While .,e believe the sourccs of our Information to be relloble, we In no way represent or guarantee the accuracy thereof nor of the statements mude herein Any action to be taken by the subscriber should be based on hiS own investigation and information Janney Montgomcry Seoll, Inc, as a corporation, and Its officers or employees, moy now have, or may later lake, positions or lrades In respect to any seculltles mentioned In thiS or any future Issue, and such posilion may be different from ony views now or hereafter expressed In thiS or any other Issue Janney Montgomery Seott, Inc, which IS regIStered With the SEC as on Investment adVisor, may give adVice to Its Investment adVisory and othel customers Independently of any statements mode In thiS or In any other Issue Further ,nformat,on on any secunty mentioned herem IS avollable on request