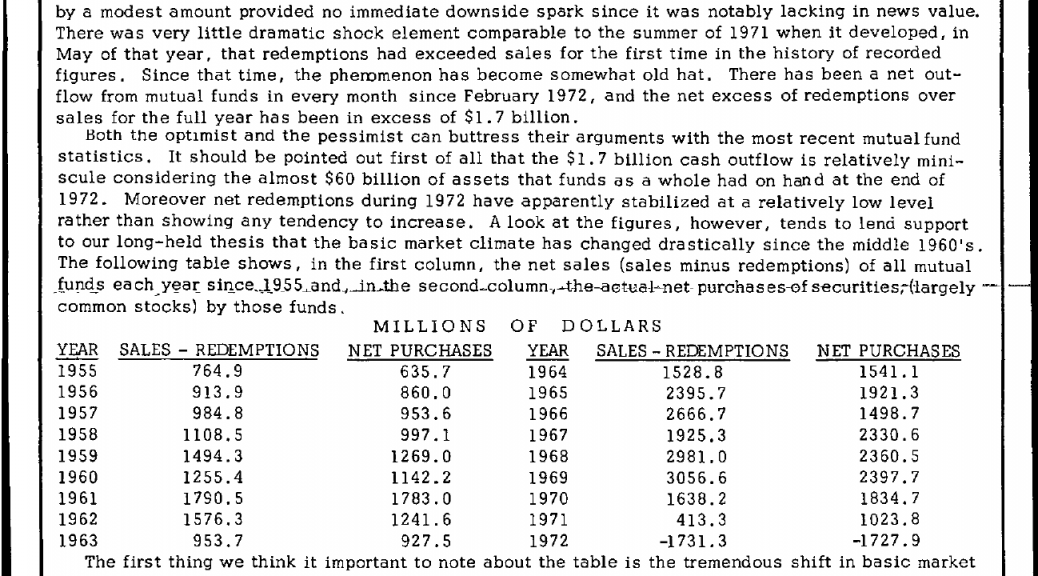 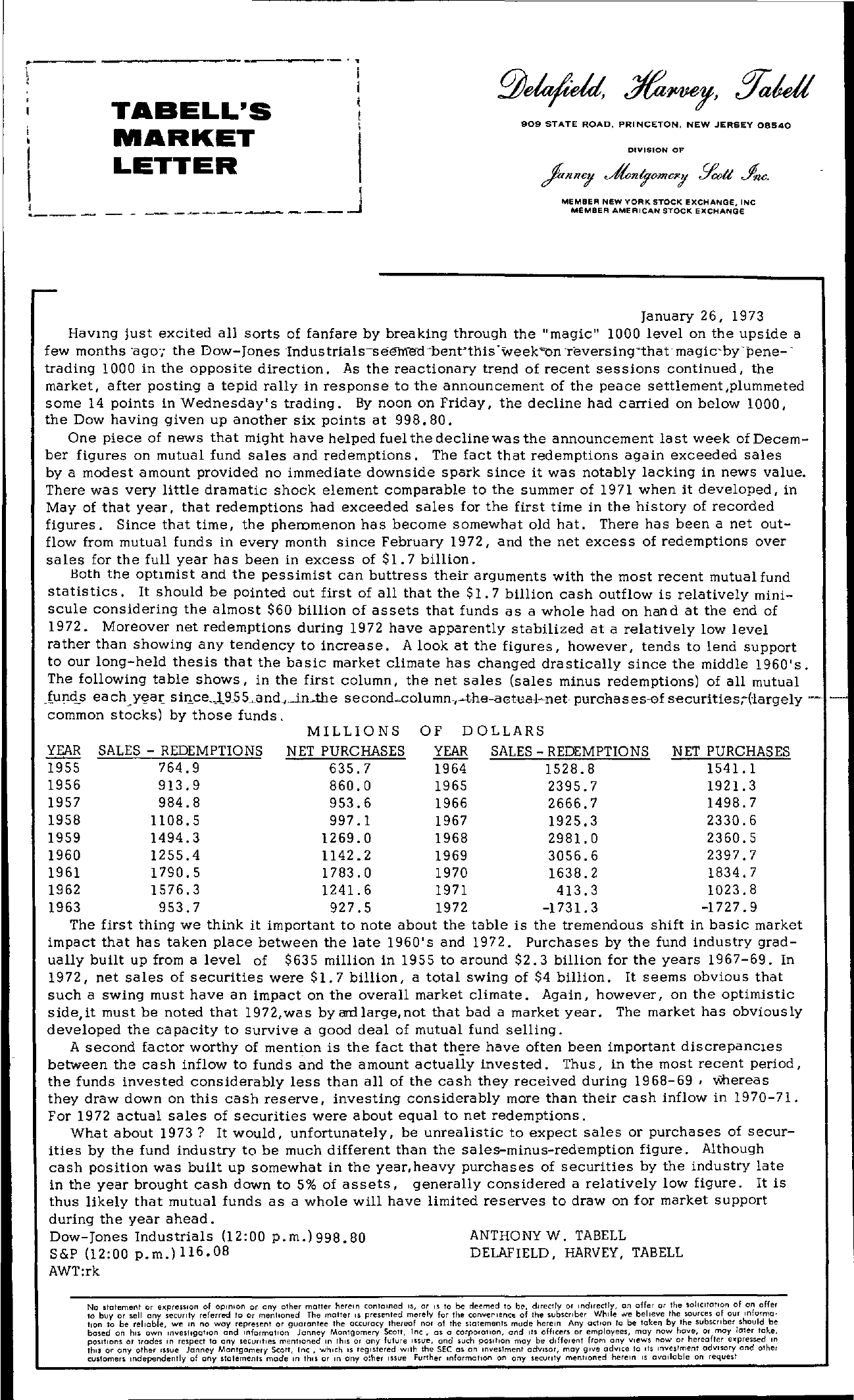 – – – – – – ,——— \ TABELL'S MARKET LETTER J 909 STATE ROAD, PRINCETON, NEW JERSEY 08540 DIVISION OF MEMBER NEW VORK. STOCK EXCHANGE, INC MEMBER AMERICAN STOCK EXCHANGE January 26, 1973 Havmg just excited all sorts of fanfare by breaking through the magic 1000 level on the upside a few months -ago-; the Dow-Jones -Industrials-seerrre-d -bent'this-weekOn -reversing'that- magic-by-pene– trading 1000 in the opposite direction. As the reactionary trend of recent sessions continued, the market, after posting a tepid rally in response to the announcement of the peace settlement,plummeted some 14 points in Wednesday's trading. By noon on Friday, the decline had carried on below 1000, the Dow having given up another six points at 998.80. One piece of news that might have helped fuel the decline was the announcement last week of Decem- ber figures on mutual fund sales and redemptions. The fact that redemptions again exceeded sales by a modest amount provided no immediate downside spark since it was notably lacking in news value. There was very little dramatic shock element comparable to the summer of 1971 when it developed, in May of that year, that redemptions had exceeded sales for the first time in the history of recorded figures. Since that time, the pheromenon has become somewhat old hat. There has been a net out- flow from mutual funds in every month since February 1972, and the net excess of redemptions over sales for the full year has been in excess of 1.7 billion. Both the optimist and the pessimist can buttress their arguments with the most recent mutual fund statistics. It should be pOinted out first of all that the 1.7 blllion cash outflow is relatively mini- scule considering the almost 60 billion of assets that funds as a whole had on hand at the end of 1972. Moreover net redemptions during 1972 have apparently stabilized at a relatively low level rather than showing any tendency to increase. A look at the figures, however, tends to lend support to our long-held thesis that the basic market climate has changed drastically since the middle 1960's. The following table shows, in the first column, the net sales (sales minus redemptions) of all mutual Juncis ea ch,y,a,. si'lce.1.95 5and,.-inthe secondcolumn-,–t-he-aetua-l-net- purcnas es-of securities;-(iargely – common stocks) by those funds. MILLIONS OF DOLLARS YEAR SALES – REDEMPTIONS NET PURCHASES YEAR SALES – REDEMPTIONS NET PURCHASES 1955 764.9 635.7 1964 1528.8 1541. I 1956 913.9 860.0 1965 2395.7 1921.3 1957 984.8 953.6 1966 2666.7 1498.7 1958 1108.5 997.1 1967 1925.3 2330.6 1959 1494.3 1269.0 1968 2981. 0 2360.5 1960 1255.4 1142.2 1969 3056.6 2397.7 1961 1790.5 1783.0 1970 1638.2 1834.7 1962 1576.3 1241. 6 1971 413.3 1023.8 1963 953.7 927.5 1972 -1731. 3 -1727.9 The first thing we think it important to note about the table is the tremendous shift in basic market impact that has taken place between the late 1960's and 1972. Purchases by the fund industry grad- ually built up from a level of 635 mlllion in 1955 to around 2.3 billion for the years 1967-69. In 1972, net sales of securities were 1.7 billion, a total swing of 4 billion. It seems obvious that such a swing must have an impact on the overall market climate. Again, however, on the optimistic side,it must be noted that 1972,was byarrllarge,not that bad a market year. The market has obviously developed the capacity to survive a good deal of mutual fund selling. A second factor worthy of mention is the fact that thre have often been important discrepancies between the cash inflow to funds and the amount actually invested. Thus, in the most recent period, the funds invested considerably less than all of the cash they received during 1968-69, w,ereas they draw down on this cash reserve, investing considerably more than their cash inflow in 1970-71. For 1972 actual sales of securities were about equal to net redemptions. What about 1973 It would, unfortunately, be unrealistic to expect sales or purchases of secur- ities by the fund industry to be much different than the sales-minus-redemption figure. Although cash position was built up somewhat in the year,heavy purchases of securities by the industry late in the year brought cash down to 5 of assets, generally considered a relatively low figure. It is thus likely that mutual funds as a whole will have limited reserves to draw on for market support during the year ahead. Dow-Jones Industrials (1200 p.m.)998.80 S&P (1200 p.m.) 116.08 ANTHONY W. TABELL DELAFIELD, HARVEY, TABELL AWTrk – No statement or expression of opmlon or any other matter herein contolned IS, or I to be deemed to be, directly or Indirectly, on offer or the sollcltotlon of an offer to buy or sell any security referred to or menhoned The molter IS presented merely for the converlcnc!O of the subscriber While we believe the sources of our information to be reliable, we In no way represent or guarontee the accurocy thereof nor of the statements mude herein Any action to be token by the subSCriber should be bosed on hiS own Investigation and Information Janney Montgomery Scoll, Inc, as a corporallon, and It officers or employees, may now hove, or may later toke, POSitiOns or trades In respect to any seCUrities menlloned In thiS or any fulure Issue, ond such position moy be different from any views now or hereafter e'(pressed In thl3 or ony other Issue Janney Montgomery Scoll, Inc, which IS registered With the SEC as on Investment adVisor, may g.ve adve to .ts Invutment adVisory and othlI customers Independently of any statements mode In thiS or In any oher Issue Further Informotlon on any security mentioned herein IS avollable on request