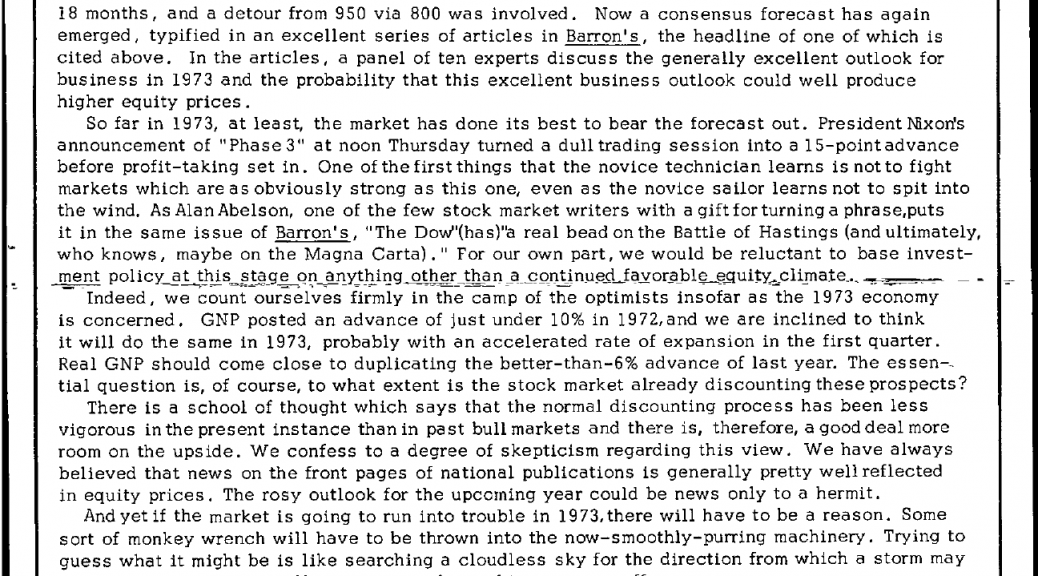 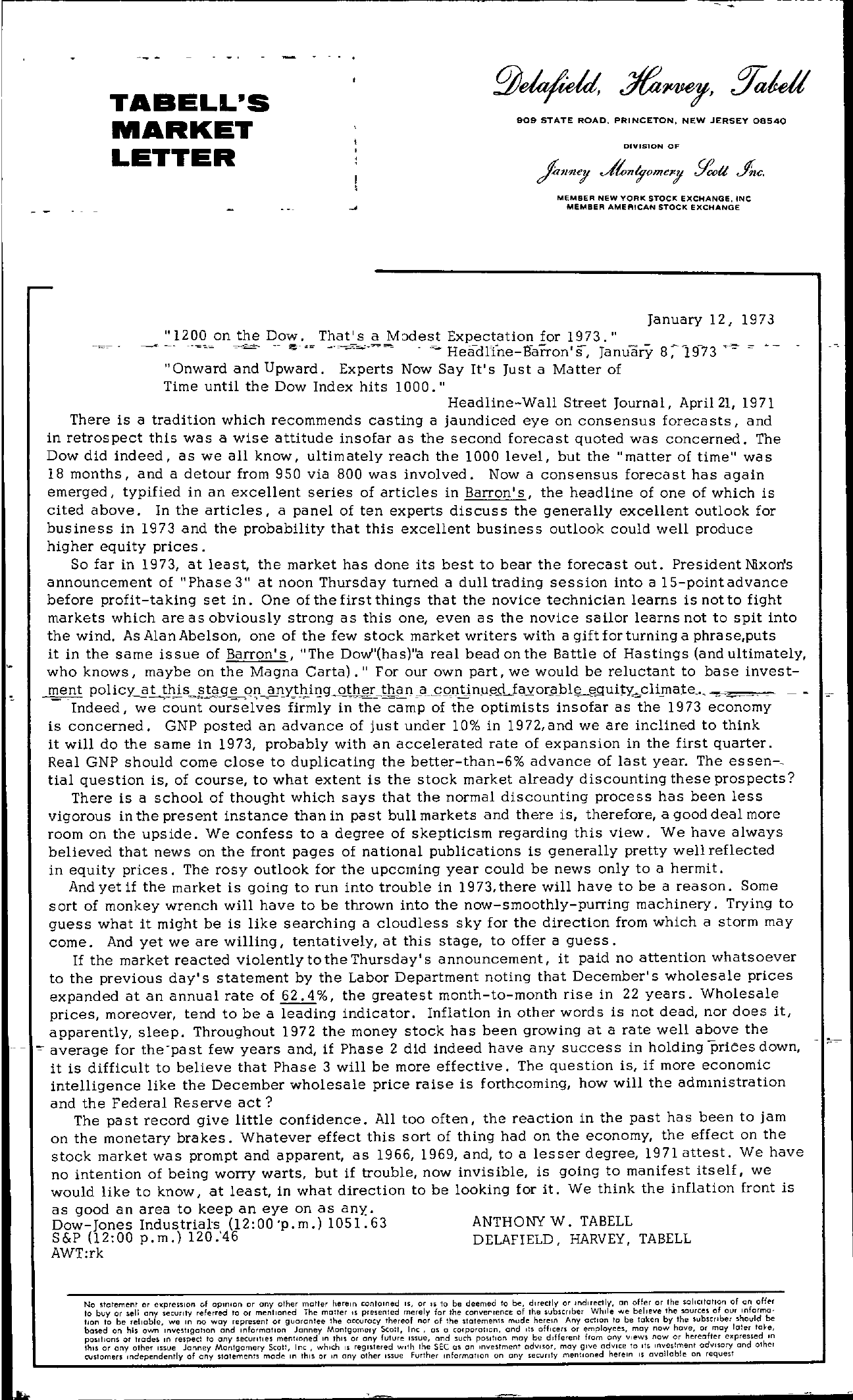 TABELL'S MARKET LETTER 909 STATE ROAD. PRINCETON, NEW JERSEY 08540 DIVISION OF MEMBER NEW YORk STOCK eXCHANGE, INC MEMBER AMEFUCAN STOCK EXCHANGE January 12, 1973 1200 on the Dow. That's a Mdest Expectation for 1973. e ' -'.7.'- . – HeadlYne-Barron's, January 8;-'1973 – Onward and Upward. Experts Now Say It's Just a Matter of Time until the Dow Index hits 1000. Headline-Wall Street Journal, April 21, 1971 There is a tradition which recommends casting a jaundiced eye on consensus forecasts, and in retrospect this was a wise attitude insofar as the second forecast quoted was concerned. The Dow did indeed, as we all know, ultimately reach the 1000 level, but the matter of time was 18 months, and a detour from 950 via 800 was involved. Now a consensus forecast has again emerged, typified in an excellent series of articles in Barron's, the headline of one of which is cited above. In the articles, a panel of ten experts discuss the generally excellent outlook for business in 1973 and the probability that this excellent business outlook could well produce higher equity prices. So far in 1973, at least, the market has done its best to bear the forecast out. President Nixon's announcement of Phase 3 at noon Thursday turned a dull trading session into a 15-pointadvance before profit-taking set in. One of the first things that the novice technician learns is not to fight markets which are as obviously strong as this one, even as the novice sailor learns not to spit into the wind. As AlanAbelson, one of the few stock market writers with a gift for turning a phrase,puts it in the same issue of Barron's, The Dow(has)a real bead on the Battle of Hastings (and ultimately, who knows, maybe on the Magna Carta). For our own part, we would be reluctant to base invest- ment policY-9!J.hlsl!tgqn-A.nythilg other.than,Cl,5'Qntjnul'!,Ua.Yorltble El-'!uity,climate,.. …,.-'. – Indeed, we countoursel;,es firmly i'the-cam'p of the optimists insofar as the 1973 economy is concerned. GNP posted an advance of just under 10 in 1972,and we are inclined to think it will do the same in 1973, probably with an accelerated rate of expansion in the first quarter. Real GNP should come close to duplicating the better-than-6 advance of last year. The essen- tial question is, of course, to what extent is the stock market already discounting these prospects There is a school of thought which says that the normal discounting process has been less vigorous in the present instance than in past bull markets and there is, therefore, a good deal more room on the upside. We confess to a degree of skepticism regarding this view. We have always believed that news on the front pages of national publications is generally pretty well reflected in equity prices. The rosy outlook for the upcoming year could be news only to a hermit. And yet if the market is going to run into trouble in 1973,there will have to be a reason. Some sort of monkey wrench will have to be thrown into the now-smoothly-purring machinery. Trying to guess what it might be is like searching a cloudless sky for the direction from which a storm may come. And yet we are willing, tentatively, at this stage, to offer a guess. If the market reacted violently to the Thursday's announcement, it paid no attention whatsoever to the previous day's statement by the Labor Department noting that December's wholesale prices expanded at an annual rate of 62.4, the greatest month-to-month rise in 22 years. Wholesale prices, moreover, tend to be a leading indicator. Inflation in other words is not dead, nor does it, apparently, sleep. Throughout 1972 the money stock has been growing at a rate well above the .,. average for the-past few years and, if Phase 2 did indeed have any success in holding priCes down, it is difficult to believe that Phase 3 will be more effective. The question is, if more economic intelligence like the December wholesale price raise is forthcoming, how will the admmistration and the Federal Reserve act The past record give little confidence. All too often, the reaction in the past has been to jam on the monetary brakes. Whatever effect this sort of thing had on the economy, the effect on the stock market was prompt and apparent, as 1966, 1969, and, to a lesser degree, 1971 attest. We have no intention of being worry warts, but if trouble, now invisible, is going to manifest itself, we would like to know, at least, in what direction to be looking for it. We think the inflation front is as good an area to keep an eye on as any. Dow-Jones Industrials (1200p.m.) 1051.63 S&P (1200 p.m.) 120.'46 AWTrk ANTHONY W. TABELL DELAFIELD, HARVEY, TABELL No statement or c;presslon vf opmlon or ony other matter herein tontomed IS, or IS to be deemed to be, directly or mdlrectly, on offer or the soliCitation of on offN to buy or ell ony security referred to or mentioned The moiler u presented merely for Ihe converlence; of The subscriber While we believe The sources of our Informa Tlon To be reliable, we In no way represent or guaranTee The accuracy Thereof nor of The staTements mude herein Any action to be token by the subSCriber should be based on his own investigation and Information Janney Montgomery Scott, Inc, as a corporallcn, and lIs officers or employees, may now have, or may fater tae, posllions or trades In respect to any securities menTIOned In Ihls or any future Issue, and such pOSition may be different from any v,ws now or hereafter expressed on thlS or any ather Issue Janney Montgomery Scott, Inc, which IS registered With the SEC as on Investment adVisor, may gll.. e adVice To Its Invcstment adVISOry and othcl CI,Istomers independenTly of any statements mode In thiS or In any other Issue Further informaTion on ony security mentioned herem IS available on requesT