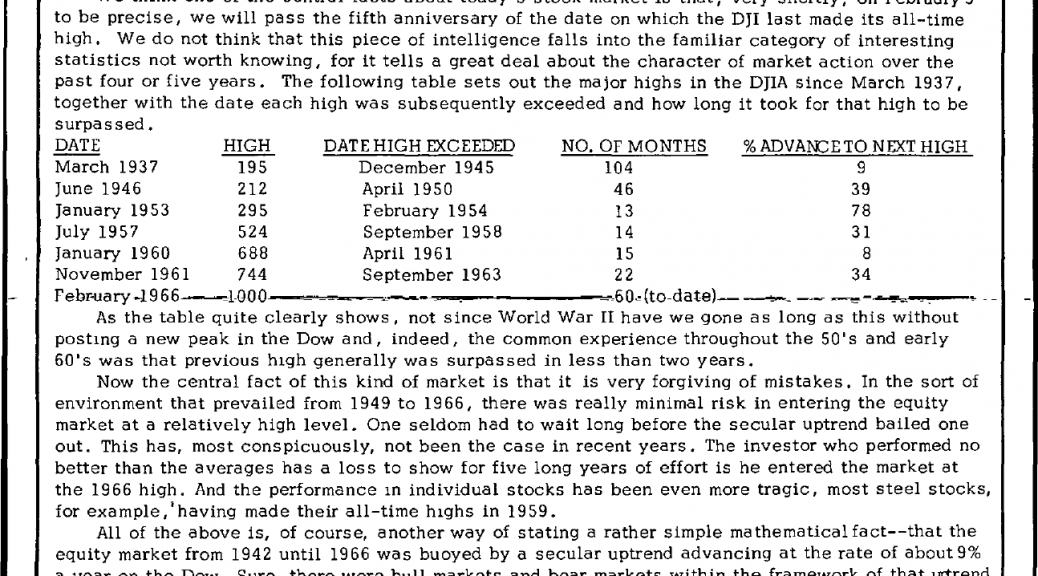 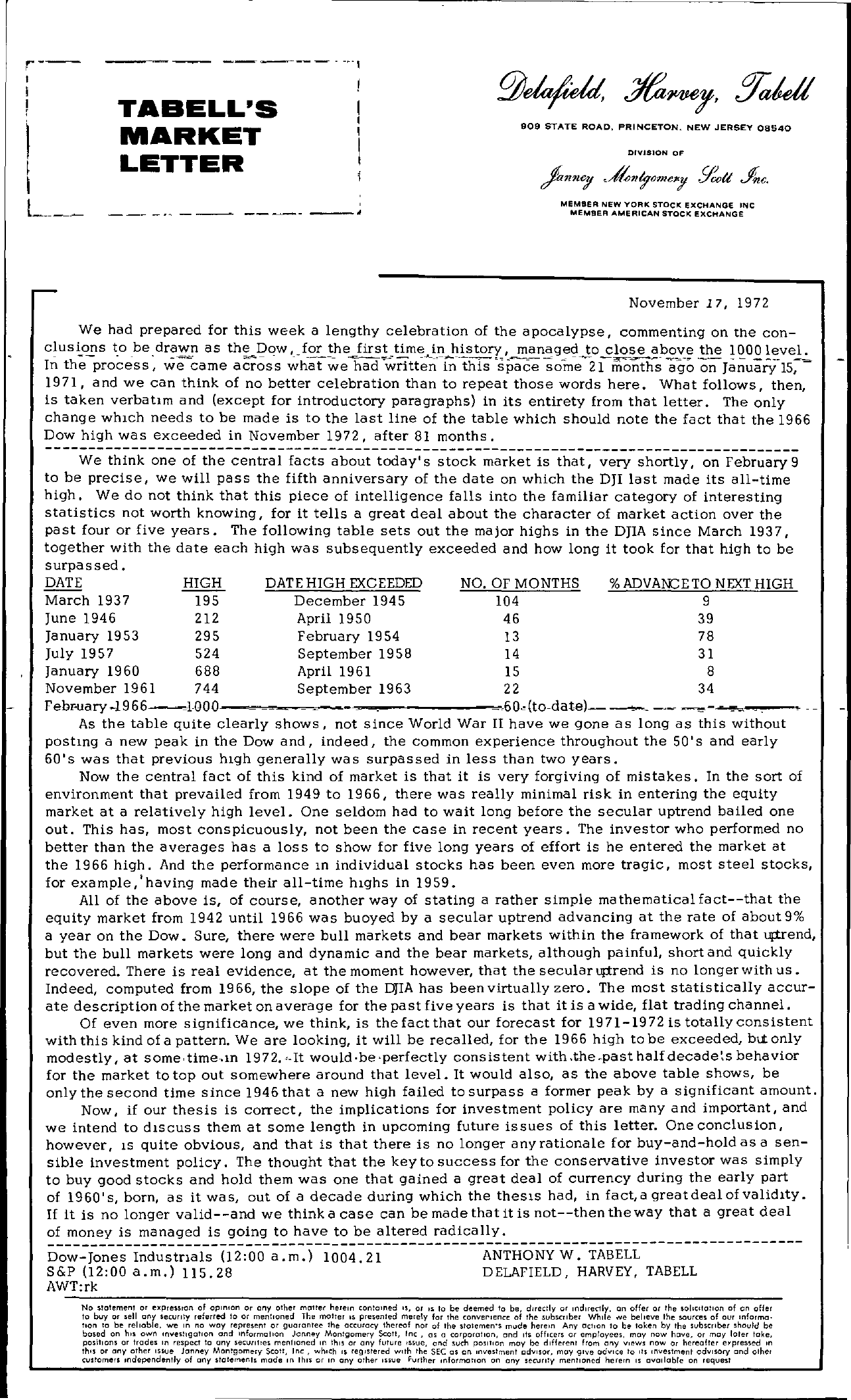 r— —— – -.-, TABELL'S MARKET LETTER — – —- —- —. 909 STATE ROAD, PRINCETON, NEW JERSEY 08540 DIVISION OF MEM8ER NEW YORK STOCK EXCHANGE INC MEM8ER AMEAICAN STOCK EXCHANGE November 17, 1972 We had prepared for this week a lengthy celebration of the apocalypse, commenting on the con- clusions to be drawn as the Dow, Jor the first time in history, managed to close above the 1000 level. In the-process wecame across ';'hateh6d;,;,ritt;i';-n;;this space om-e-21;;orrths ago OnJa;uarY-15 1971, and we can think of no better celebration than to repeat those words here. What follows, then, is taken verbahm and (except for introductory paragraphs) in its entirety from that letter. The only change Wh1Ch needs to be made is to the last line of the table which should note the fact that the 1966 Dow high was exceeded in November 1972, after 81 months. —————————————————————————————- We think one of the central facts about today's stock market is that, very shortly, on February 9 to be precise, we will pass the fifth anniversary of the date on which the DJI last made its all-time high. We do not think that this piece of intelligence falls into the familiar category of intereSting statistics not worth knowing, for it tells a great deal about the character of market action over the past four or five years. The following table sets out the major highs in the DJIA since March 1937, together with the date each high was subsequently exceeded and how long it took for that high to be surpassed. DATE HIGH DATE HIGH EXCEEDED NO. OF MONTHS ADVAIICETO NEXT HIGH March 1937 195 December 1945 104 9 June 1946 212 April 1950 46 39 January 1953 295 February 1954 13 78 July 1957 524 September 1958 14 31 January 1960 688 April 1961 15 8 November 1961 744 September 1963 22 34 — .Febr-uary-1966–lQOO ..—–160.(to-date)- -…..,.- As the table quite clearly shows, not since World War II have we gone as long as this without postmg a new peak in the Dow and, indeed, the common experience throughout the 50' s and early 60's was that previous h1gh generally was surpassed in less than two years. Now the central fact of this kind of market is that it is very forgiving of mistakes. In the sort of environment that prevailed from 1949 to 1966, there was really minimal risk in entering the equity market at a relatively high level. One seldom had to wait long before the secular uptrend bailed one out. This has, most conspicuously, not been the case in recent years. The investor who performed no better than the averages has a loss to show for five long years of effort is he entered the market at the 1966 high. And the performance m individual stocks has been even more tragic, most steel stocks, for example,'having made their all-time h1ghs in 1959. All of the above is, of course, another way of stating a rather simple mathematical fact–that the equity market from 1942 until 1966 was buoyed by a secular uptrend advancing at the rate of about 9 a year on the Dow. Sure, there were bull markets and bear markets within the framework of that uprend, but the bull markets were long and dynamic and the bear markets, although painful, short and quickly recovered. There is real eVidence, at the moment however, that the secularuprend is no longer with us. Indeed, computed from 1966, the slope of the DJIA has been virtually zero. The most statistically accur- ate description of the market on average for the past five years is that it is a wide, flat trading channel. Of even more significance, we think, is the fact that our forecast for 1971-1972 is totally consistent with this kind of a pattern. We are looking, it will be recalled, for the 1966 high to be exceeded, btl only modestly, at some,time,m 1972. –It would be .perfectly consistent with .the past half decades behavior for the market to top out somewhere around that level. It would also, as the above table shows, be only the second time since 1946 that a new high failed to surpass a former peak by a significant amount. Now, if our thesis is correct, the implications for investment policy are many and important, and we intend to d1SCUSS them at some length in upcoming future issues of this letter. One conclUSion, however, 1S quite obviOUS, and that is that there is no longer any rationale for buy-and-hold as a sen- sible investment policy. The thought that the key to success for the conservative investor was simply to buy good stocks and hold them was one that gained a great deal of currency during the early part of 1960' s, born, as it was, out of a decade during which the thes1s had, in fact, a great deal of valid1ty. If it is no longer valid–and we think a case can be made that it is not–then the way that a great deal of money is managed is going to have to be altered radically. —————————————————————————————- Dow-Jones Industnals (1200 a.m.) 1004.21 ANTHONY W. TAB ELL S&P (1200 a.m.) 115.28 DELAFIELD, HARVEY, TABELL AWTrk No statement or expression of opinion or any other moiler herem contolned IS, or IS to be deemed 10 be, directly or indirectly, an oHer or Ihe sollcllollon of on offer 10 buy or !roell any security referred 10 or mentioned The molTer 15 presented merely for Ihe converrcnCE of Ihe subSCriber While 'I'Ie believe Ihe s.ources of our Informa tlon 10 be relloble, we In no way represent or guarantee Ihe accuracy thereof nor of Ihe slolemen'S mude herem Any ClCllon to be token by Ihe subSCriber should be based on hiS own Investigation and Information Janney Montgomery Scali, Inc, as a corporation, Clnd liS officers or employees, may now hove, or moy latcr toke, pos\tlons or trades In respect 10 any seCUrll1cs mentioned In Ihls or Clny future Issue, Clnd such position may be different from ony views now or hereafter epresed In thl or ony other Issue Jonney Montgomery Scali, Inc, which IS registered With the SEC os on Investment odvlsor, moy give adVice to Its invesfment adVISOry ond othel CUSlomers Independently of ony stotements mode In thiS or In any other Issue Further onformatlon on any seC\Jrlty mentioned hereon 15 available on request