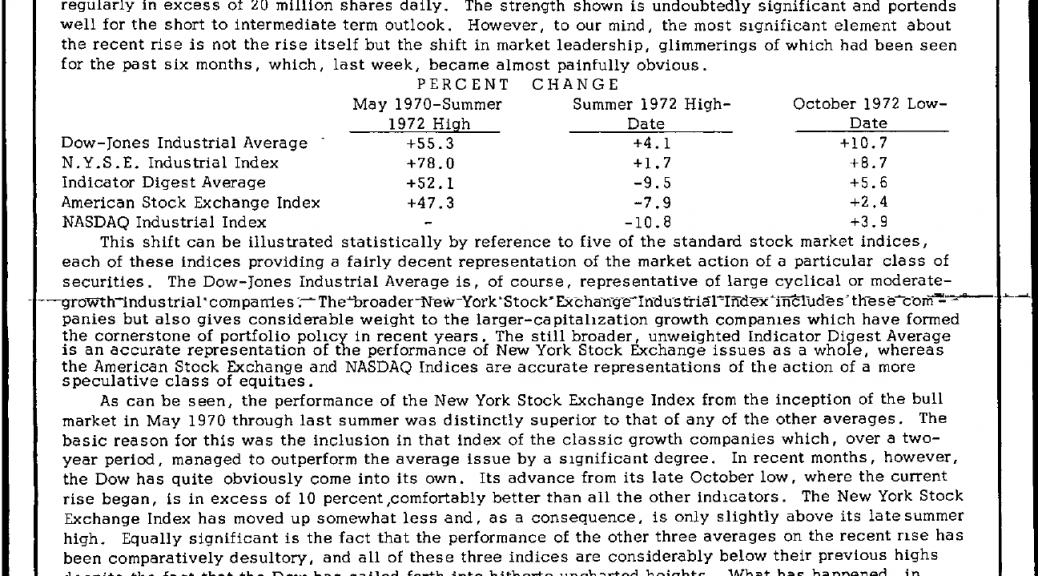 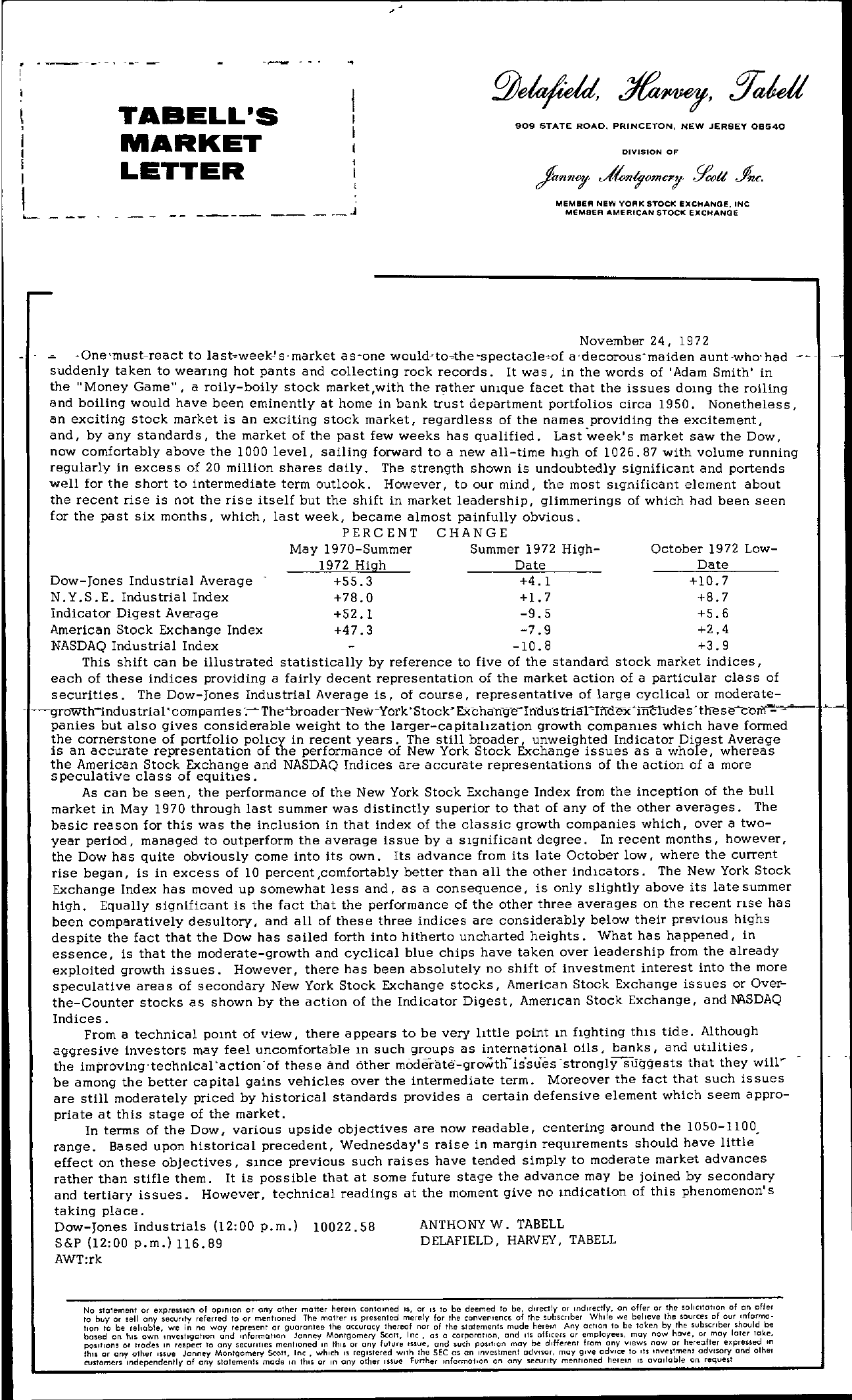 TABELL'S I I MARKET I I LETTER I J 909 STATE ROAD, PRINCETON, NEW JERSEY OB540 DIVISION OF MEMBER NEW VOAK STOCK EXCHANGE, INC MEMBER A.MERICAN STOCK EXCHANGE November 24, 1972 -One'must-react to lastweek-' s, market as-one wouldto..thespectacleof a 'decorous-maiden aunt -who-had suddenly taken to weanng hot pants and collecting rock records. It was, in the words of 'Adam Smith' in the Money Game, a roily-boily stock market,with the rather umque facet that the issues domg the roiling and bolling would have been eminently at home in bank trust department portfolios circa 1950. Nonetheless, an exciting stock market is an exciting stock market, regardless of the names providing the excitement, and, by any standards, the market of the past few weeks has qualified. Last week's market saw the Dow, now comfortably above the 1000 level, sailing forward to a newall-time hlgh of 1026.87 with volume running regularly in excess of 20 million shares daily. The strength shown is undoubtedly Significant and portends well for the short to intermediate term outlook. However, to our mind, the most slgnificant element about the recent rise is not the rise itself but the shift in market leadership, glimmerings of which had been seen for the past six months, which, last week, became almost painfully obvious. PERCENT CHANGE May 1970-Summer Summer 1972 High- October 1972 Low- 1972 High Date Date Dow-Tones Industrial Average 55.3 4.1 10.7 N.Y.S.E. Industrial Index 78.0 1.7 8.7 Indicator Digest Average 52.1 -9.5 5.6 American Stock Exchange Index 47.3 -7.9 2.4 NASDAQ Industrial Index -10.8 3.9 This shift can be illustrated statistically by reference to five of the standard stock market indices, each of these indices providing a fairly decent representation of the market action of a particular class of securities. The Dow-Jones Industrial Average is, of course, representative of large cyclical or moderate- – –growth1ndustria I. com pame s ;- The'broaderNew-York 'Stock' Exchan'Je-IntlUS ttlarIlld-ex 'inClude s -tile s ecb- panies but also gives considerable weight to the larger-capitahzation growth compames which have formed he cornerstone of portfoli pollcy in recent years. The still broader, unweighted Indicator Digest Average IS an accurate representahon of the performance of New York Stock Exchange issues as a whole. whereas the American Stock Exchange and NASDAQ Indices are accurate representations of the action of a more speculative class of equilles. As can be seen, the performance of the New York Stock Exchange Index from the inception of the bull market in May 1970 through last summer was distinctly superior to that of any of the other averages. The basic reason for this was the inclusion in that index of the classic growth companies which, over a two- year period. managed to outperform the average issue by a s1gnificant degree. In recent months, however, the Dow has quite obviously come into its own. Its advance from its late October low, where the current rise began, is in excess of 10 percent ,comfortably better than all the other indlcators. The New York Stock Exchange Index has moved up somewhat less and, as a consequence, is only slightly above its late summer high. Equally significant is the fact that the performance of the other three averages on the recent nse has been comparatively desultory, and all of these three indices are considerably below their previous highs despite the fact that the Dow has sailed forth into hitherto uncharted heights. What has happened, in essence, is that the moderate-growth and cyclical blue chips have taken over leadership from the already exploited growth issues. However, there has been absolutely no shift of investment interest into the more speculative areas of secondary New York Stock Exchange stocks, American Stock Exchange issues or Over- the-Counter stocks as shown by the action of the Indicator Digest, Amencan Stock Exchange, and N1\SDAQ Indices. From a technical pomt of view, there appears to be very llttle point m flghting th,s tide. Although aggresive investors may feel uncomfortable 1n such groups as international oils. banks, and ut1lities, the improving'tecnnical'actlonof these and other moderatE!-groWth-issties stronglystlggests that they will' be among the better capital gains vehicles over the intermediate term. Moreover the fact that such issues are still moderately priced by historical standards provides a certain defensive element which seem appro- priate at this stage of the market. In terms of the Dow, various upside objectives are now readable, centering around the l050-1100 range. Based upon historical precedent, Wednesday's raise in margin requlrements should have little effect on these obJectives, smce previous such raises have tended simply to moderate market advances rather than stifle them. It is possible that at some future stage the advance may be joined by secondary and tertiary issues. However, technical readings at the moment give no lndication of this phenomenonl s taking place. Dow-Tones Industrials (1200 p.m.) 10022.58 S&P (1200 p.m.) 116.89 ANTHONY W. TABELL DELAFIELD, HARVEY, TABELL AWTrk No statement or expression of opinion or cny other matter herein contained IS, or IS 10 be deemed to be, directly or Indirectly, on offer or the soliCitation of on offer to buy or sell any securlly referred 10 or mentioned The matter IS presented merely for the convel'Ienct of Ihe subSCriber While we believe the sources of our Informolion 10 be reliable, we In no way represenl or guarantee Ihe accuracy thereof nor of Ihe statements mude herein Any actIOn to be token by the subscriber should be based on hiS own II'lvestlgatlon and InformatIOn Janney Montgomery Scali, Inc, as a corporation, and lIS officers or employees, may now have, or may later lake, posilions or trades In respect 10 any securl!les mentioned 111 Ihls or any future Issue, and such pOSITion may be different from olly views now or hereofter expressed In Ihu or cny other usue Janney MOlltgomery Scali, tnc . whICh IS registered wITh the SEC as 011 Investment adVisor, may give adVice to Its Investment odvlOry clld other cvstomers Independelltly of any statements made 11'\ thiS or In any olher Issue Further informatIon on any secvflty mentioned herein IS ovolloble 011 request