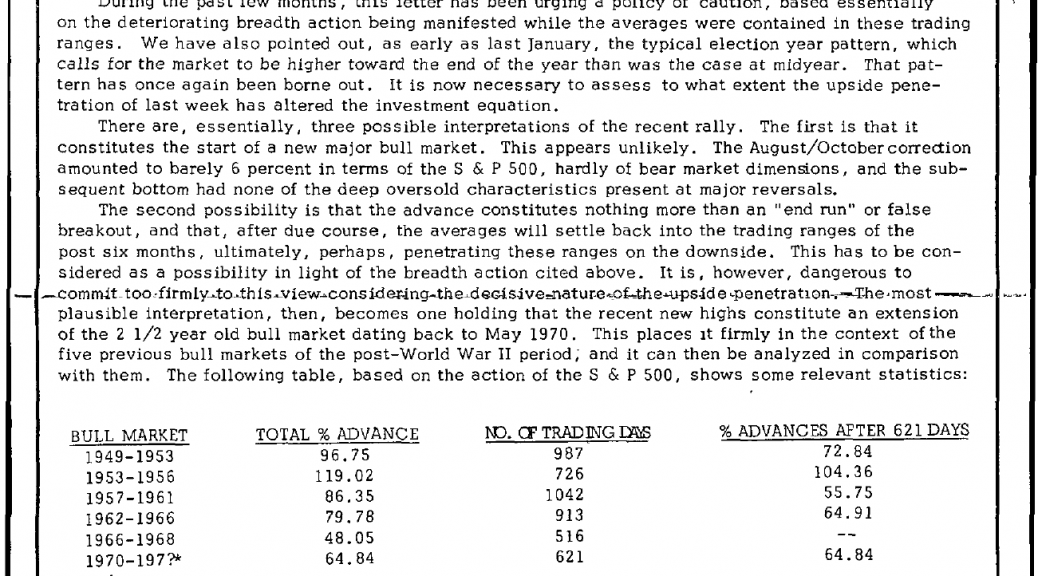 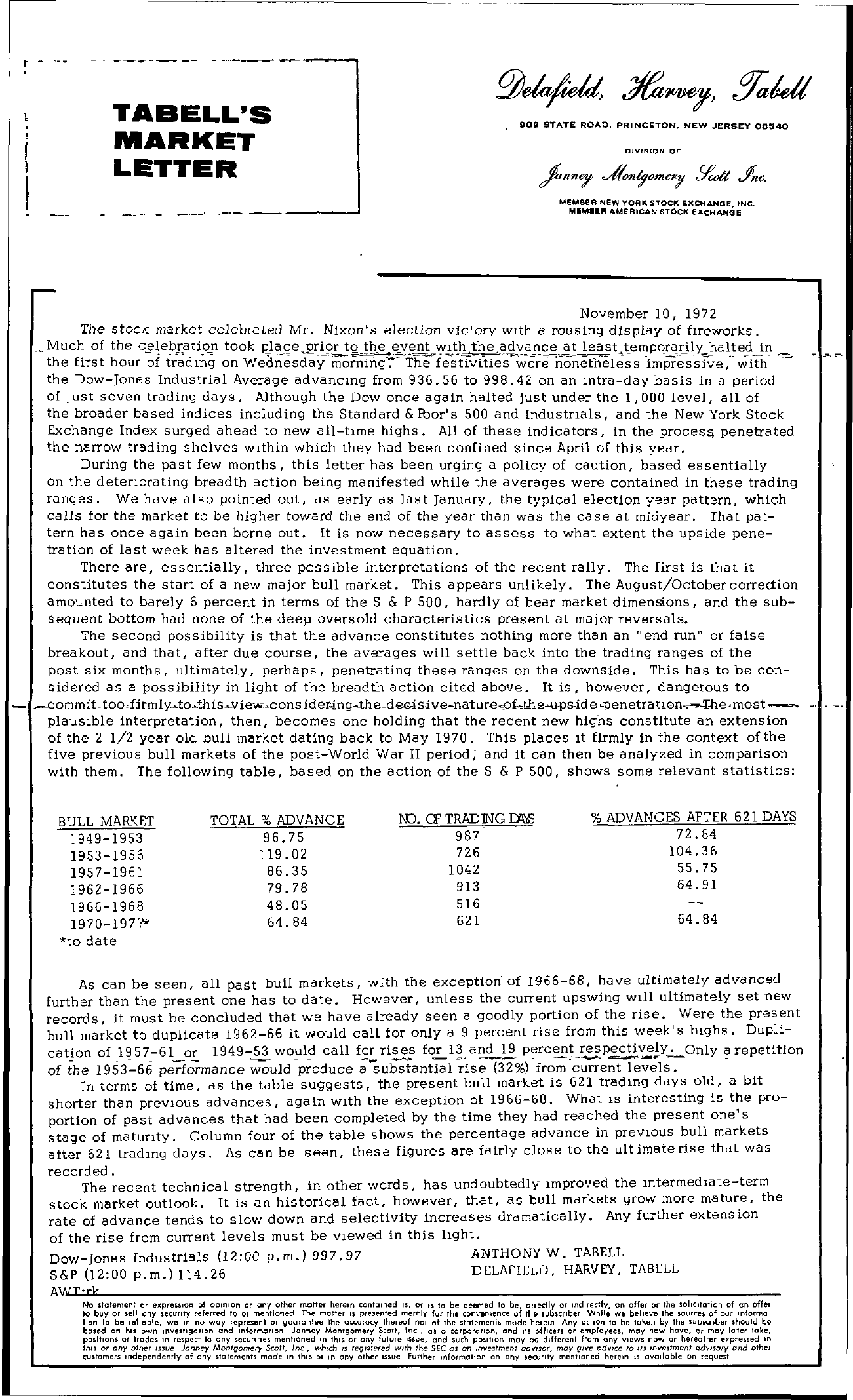 ,f ,- …… T – I TABELL'S ! MARKET LETTER I -. – —- — —– ek/u/d, .Y&!I, aUl 909 STATE ROA.D. PRINCETON. NEW JERSEY 08540 DIVISION OF elm,,!, o4l,mcy !/cdt fie, MEMBER NEW VORK STOCK ExCJ1.ANaE, tNC. MEMBER AMERICAN STOCK EXCHANGE November 10, 1972 The stock market celebrated Mr. Nixon's election victory with a rousing display of fIreworks. . Much of the cglebration took pJ,,-ce.pripr tQ the event with the.advance at least temporarily halted in the first hour of tradIng on wednesdaymorig-''The-ies-tivties-we;e-nonetheissimp;;ssrve, with — the Dow-Jones Industrial Average advancmg from 936.56 to 998.42 on an intra-day basis in a period of just seven trading days. Although the Dow once again halted just under the 1,000 level, all of the broader based indices including the Standard & Fbor's 500 and Industnals, and the New York Stock Exchange Index surged ahead to newall-time highs. All of these indicators, in the proces,;; penetrated the narrow trading shelves within which they had been confined since April of this year. During the past few months, this letter has been urging a policy of caution, based essentially , On the deteriorating breadth action being manifested while the averages were contained in these trading ranges. We have also pointed out, as early as last January, the typical election year pattern, which calls for the market to be higher toward the end of the year than was the case at midyear. That pat- tern has once again been borne out. It is now necessary to assess to what extent the upside pene- tration of last week has altered the investment equation. There are, essentially, three possible interpretations of the recent rally. The first is that it constitutes the start of a new major bull market. This appears unlikely. The August/October corredion amounted to barely 6 percent in terms of the S & P 500, hardly of bear market dimensions, and the sub- sequent bottom had none of the deep oversold characteristics present at major reversals. The second possibility is that the advance constitutes nothing more than an end run or false breakout, and that, after due course, the averages will settle back into the trading ranges of the post six months, ultimately, perhaps, penetrating these ranges on the downside. This has to be con- sidered as a possibility in light of the breadth action cited above. It is, however, dangerous to comm4L too-firmlytothisviewconsiler.ing-theLdeG';s';venature.9kthe4Jpside penetratwn-.-'Jhemost – -. plausible interpretation, then, becomes one holding that the recent new highs constitute an extension of the 2 1/2 year old bull market dating back to May 1970. This places It firmly in the context ofthe five previous bull markets of the post-World War II period; and it can then be analyzed in comparison with them. The following table, based on the action of the S & P 500, shows some relevant statistics BULL MARKET 1949-1953 1953-1956 1957-1961 1962-1966 1966-1968 1970-197 to date TOTAL ADVANCE 96.75 119.02 86.35 79.78 48.05 64.84 ID.Cl'TRADlNGDW 987 726 1042 913 516 621 ADVANCES AFTER 621 DAYS 72.84 104.36 55.75 64.91 64.84 As can be seen, all past bull markets, with the exception of 1966-68, have ultimately advanced further than the present one has to date. However, unless the current upswing will ultimately set new records it must be concluded that we have already seen a goodly portion of the rise. Were the present bull ma;ket to duplicate 1962-66 it would call for only a 9 percent rise from this week's highs. Dupli- cation of 1957-61 or – — — – — – – 1949-53 would — call for rises — —-,.. fo-r 1-3– and 19 —— p e – r c ! ' !. . r e s p ectivelY — . O n l y a repetition – of the 1953-66 performance would produce a substantial rise (32) from current levels. In terms of time, as the table suggests, the present bull market is 621 tradmg days old, a bit shorter than prevlOUS advances, again WIth the exception of 1966-68. What IS interesting is the pro- portion of past advances that had been completed by the time they had reached the present one's stage of matunty. Column four of the table shows the percentage advance in prevlOus bull markets after 621 trading days. As can be seen, these figures are fairly close to the ultimaterise that was recorded. The recent technical strength, in other words, has undoubtedly Improved the mtermedIate-term stock market outlook. It is an historical fact, however, that, as bull markets grow more mature, the rate of advance tends to slow down and selectivity increases dramatically. Any further extens ion of the rise from current levels must be vIewed in this lIght. Dow-Jones Industrials (1200 p.m.) 997.97 S&P (1200 p.m.) 114.26 ANTHONYW. TABELL DELAFIELD, HARVEY. TABELL AVtTTrk No stotement or expression of opinion or ony other matter herein contained 1, or 15 10 be deemed to be, directly or ,ndirectly, on offer or the soliCitation of on offer to buy or sell any security referred 10 or mentioned The motter IS presented merely for Ihe converlf,nCE of the subSCriber While lie believe the sources of our ,nforma lion to be reliable, we In no way represent or guarantee the occurocy thereof nor of the statements mode herein Any oellon 10 be token by The subscnber sMould be based on hiS own investIgation and information Janney Montgomery Scali, Inc, as (I corporation, ond lIs officers or t!mployees, moy now hove, or may loler loke, positions or !Tlldes In respect 10 ony curltles mentioned In thiS or any future Issue, and such pOSitIOn moy be different from any views now or hereoFter el'pressed In th or any other IlSlJe Janney Montgomery S/olt, Inc, whICh IS registered WI,h thc SEC os an Invcstmcnt odvlsor, moy give odl'ICC to Its Invcstment adVisory and othel customers Independently of any statements mode In thiS or In any other lSue further Informohon on any security mentioned herein IS available on request