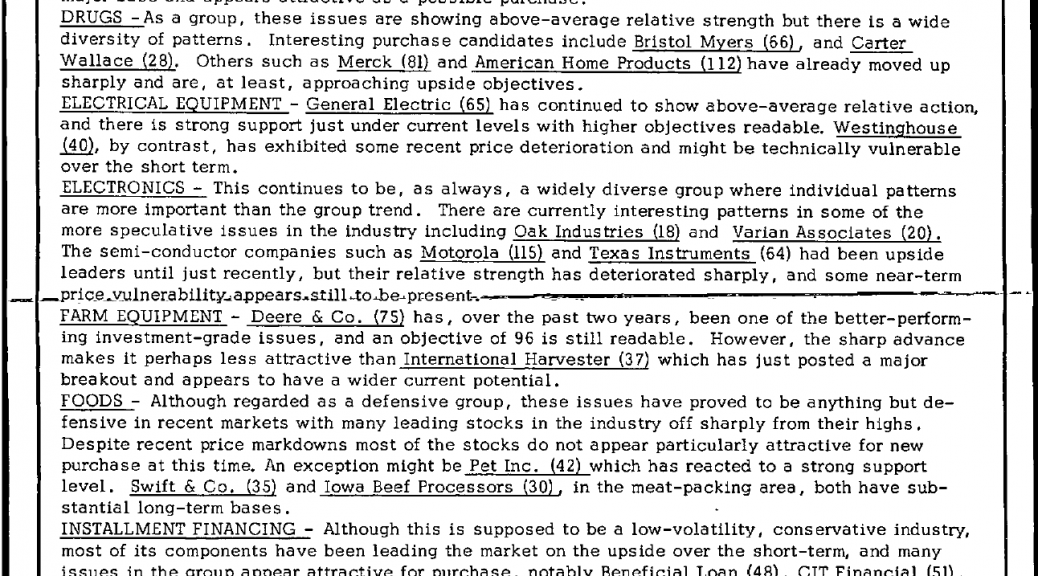 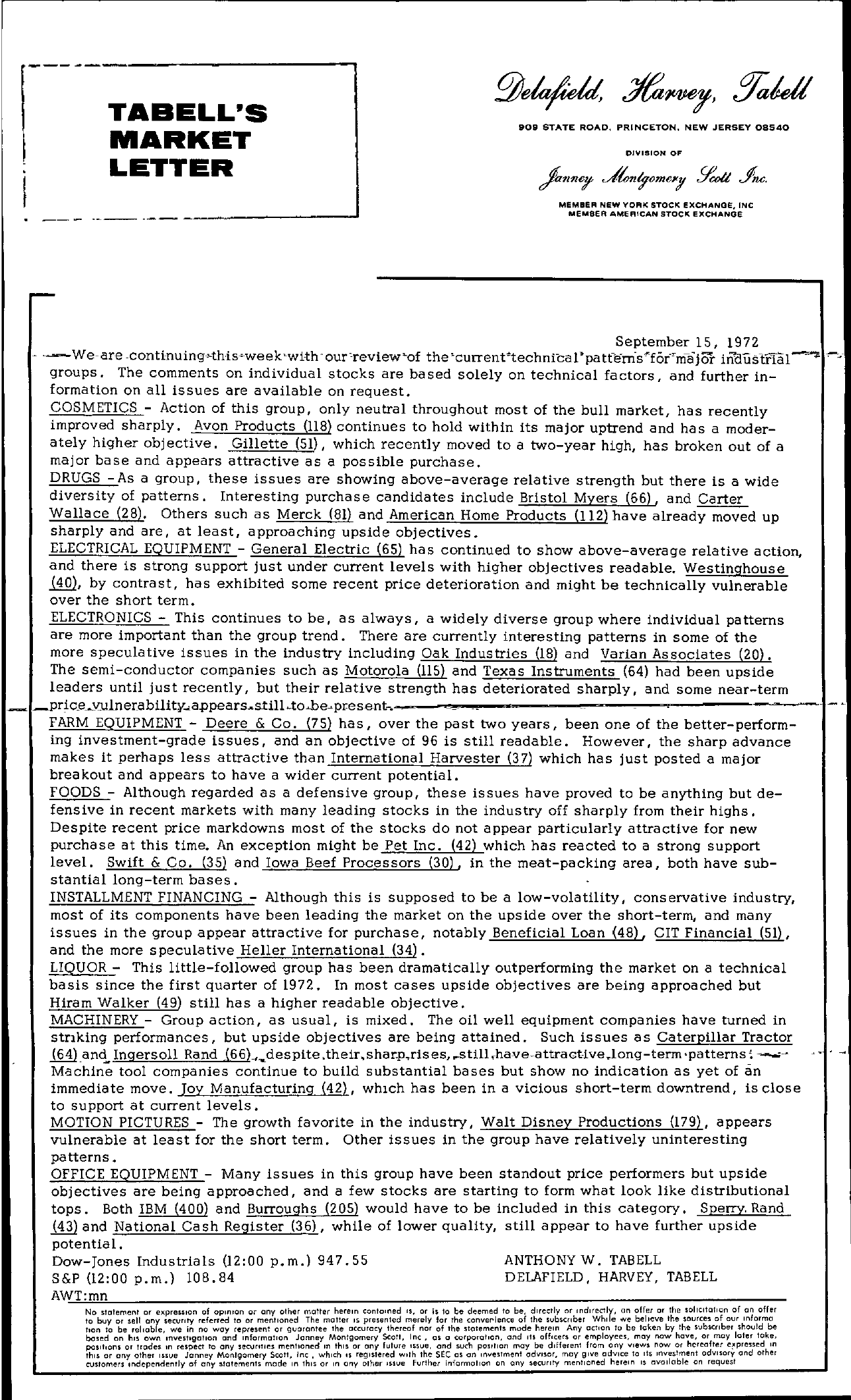 ——————— TABELL'S MARKET LETTER 909 STATE ROAD, PRINCETON. NEW JERSEY 08540 DIYISION OF MEMBER NEW YORK STOCK eXCHANE, INC MEMBER AMERICAN STOCK eXCHANGE September 15, 1972 -We-are -conUnuingtMsweekcwith -our'reviewof the 'current'technical'patfem-s'f6(m-a-jor iii'ausmal— groups. The comments on individual stocks are based solely on technical factors, and further in- formation on all issues are available on request. COSMETICS – Action of this group, only neutral throughout most of the bull market, has recently improved sharply. Avon Products (118) continues to hold within its major uptrend and has a moder- ately higher objective. Gillette (51), which recently moved to a two-year high, has broken out of a major base and appears attractive as a possible purchase. DRUGS – As a group, these issues are showing above-average relative strength but there is a wide diversity of patterns. Interesting purchase candidates include Bristol Myers (66) , and Carter Wallace (28). Others such as Merck (81) and American Home Products (112) have already moved up sharply and are, at least, approaching upside objectives. ELECTRICAL EQUIPMENT – General Electric (65) has continued to show above-average relative action, and there is strong support just under current levels with higher objectives readable. Westinghouse J!Q2, by contrast, has exhibited some recent price deterioration and might be technically vulnerable over the short term. ELECTRONICS – This continues to be, as always, a widely diverse group where individual patterns are more important than the group trend. There are currently interesting patterns in some of the more speculative issues in the industry including Oak Industries (18) and Varian Associates (20). The semi-conductor companies such as Motorola (115) and Texas Instruments (64) had been upside leaders until just recently, but their relative strength has deteriorated sharply, and some near-term –price,-ulneabilityappearsAstill..to..bepmsent-. FARM EQUIPMENT – Deere & Co. (75) has, over the past two years, been one of the better-perform- ing investment-grade issues, and an objective of 96 is still readable. However, the sharp advance makes it perhaps less attractive than International Harvester (37) which has just posted a major breakout and appears to have a wider current potential. FOODS – Although regarded as a defensive group, these issues have proved to be anything but de- fensive in recent markets with many leading stocks in the industry off sharply from their highs. Despite recent price markdowns most of the stocks do not appear particularly attractive for new purchase at this time. An exception might be Pet Inc. (42) which has reacted to a strong support level. Swift & Co. (35) and Iowa Beef Processors (30) , in the meat-packing area, both have sub- stantial long-term bases. INSTALLMENT FINANCING – Although this is supposed to be a low-volatility, conservative industry, most of its components have been leading the market on the upside over the short-term, and many issues in the group appear attractive for purchase, notably Beneficial Loan (48), CIT Financial (51), and the more speculative Heller International (34). LIQUOR – This little-followed group has been dramatically outperforming the market on a technical basis since the first quarter of 1972. In most cases upside objectives are being approached but Hiram Walker (49) still has a higher readable objective. MACHINERY – Group action, as usual, is mixed. The oil well equipment companies have turned in stnking performances, but upside objectives are being attained. Such issues as Caterpillar Tractor Man!. Ingersoll Rand (66) ,despite .their,shar.p,rises, still.ha-ve-attraGt-ive.long-term -patterns — Machine tool companies continue to build substantial bases but show no indication as yet of an immediate move. Joy Manufacturing (42), whlch has been in a vicious short-term downtrend, is close to support at current levels. MOTION PICTURES – The growth favorite in the industry, Walt Disney Productions (179), appears vulnerable at least for the short term. Other issues in the group have relatively uninteresting patterns. OFFICE EQUIPMENT – Many issues in this group have been standout price performers but upside objectives are being approached, and a few stocks are starting to form what look like distributional tops. Both IBM (400) and Burroughs (205) would have to be included in this category. Sperry, Rand (43) and National Cash Register (36), while of lower quality, still appear to have further upside potential. Dow-Jones Industrials (1200 P.m.) 947.55 S&P (1200 p.m.) 108.84 ANTHONY W. TAB ELL DELAFIELD, HARVEY, TABELL AWTmn No 51atement or expreulon of op'flIon or any other malter herein contolned IS, or 15 10 be deemed 10 be, directly or indirectly, on offer or Ihe ollcltotlon of on offer 10 buy or sell cnr, security referred to or mentioned The moiler IS presenled merely for the converlence of the subSCriber While we believe the sources of our Informa ,.on fo be rei lOb e, we In no way represent or guorantee Ihe accuracy thereof nor of Ihe statements mode herein Any action to be token by the subSCriber should be based on hiS own investigation and Information Janney Montgomery Scali, Inc, as a corporation, and lIS offICers or employees, may now have, or may later toke, poslhons or trades In respect to any rltle mentioned In thiS or any future Issue, and such pas. lion may be different from any views now or hereafter e;opreued In thiS or any other Issue Janney Montgomery Scali, Inc, which IS registered With the SEC as on Inveslment adVisor, may give adVice to lIs Investment adVisory and other customers ,ndependently of any statements made In thiS or In any other asue Further Information on any security mentioned herein IS available on request