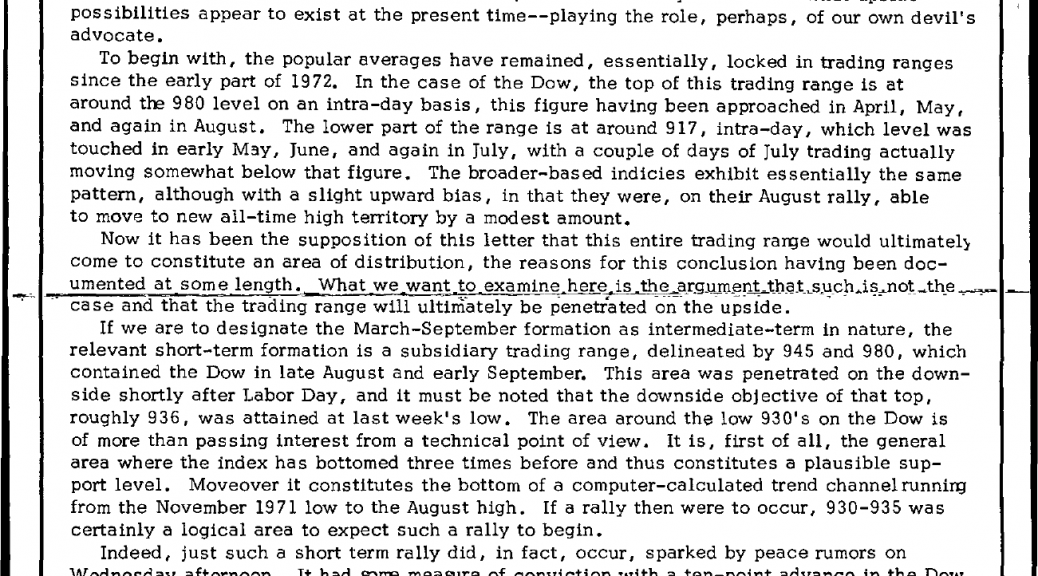 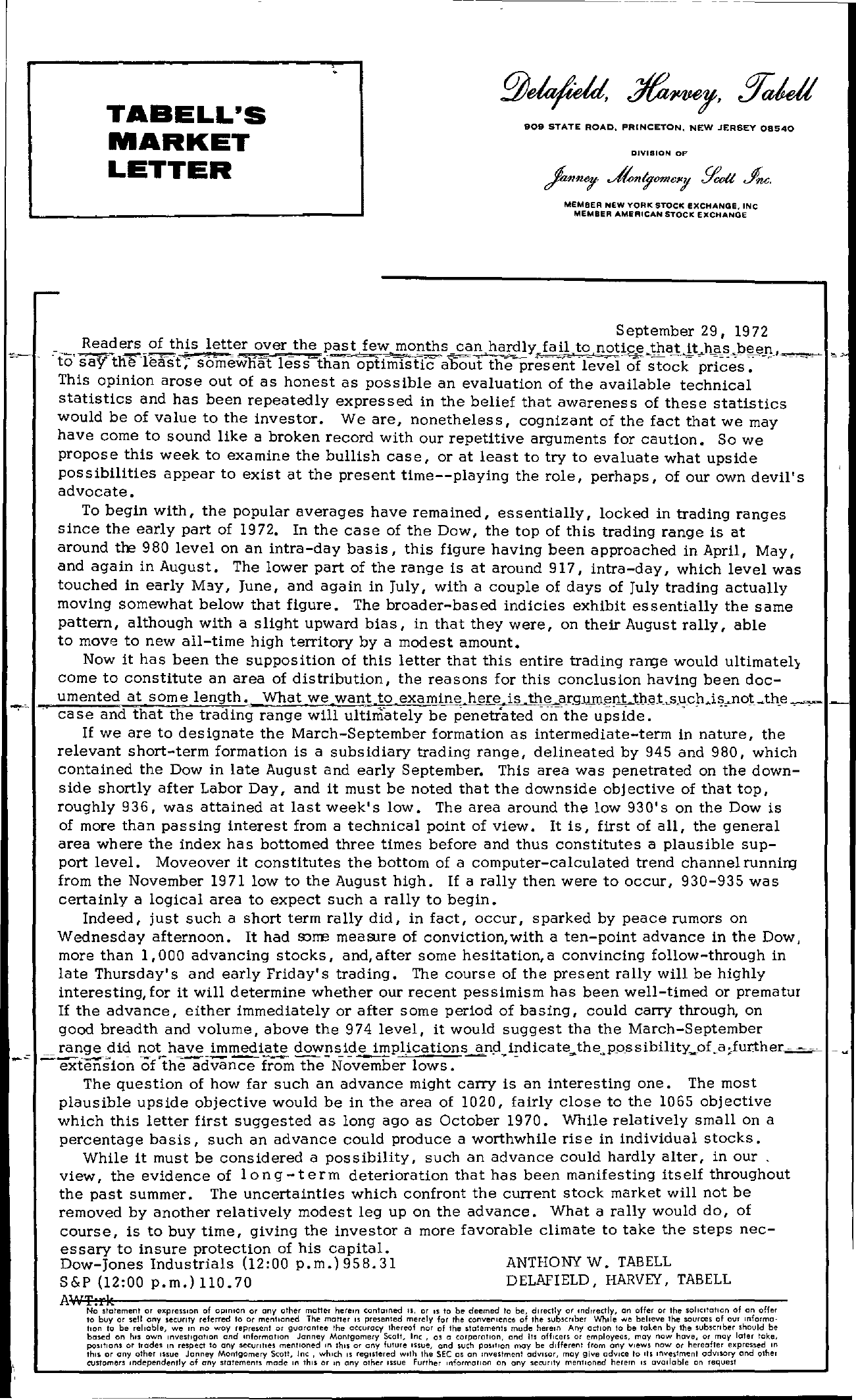 TABELLS MARKET LETTER – ——– 909 STATE ROAD, PRINCETON. NEW JERSEY 08540 DIVISION OF MEMBER NEW YORK STOCK EXCHANGE, INC MEMBER AMERICAN STOCK EXCHANGE September 29, 1972 Read ers of this letter over the past few months can hardly fa il to notice that it has been —-,-… —- – – – –'—– ' – r i' ' – – . ; . …….—-a.—-;.-';'-c;—, -.. to say th1deast; sb-mewnat less than optimistiC a'bout the present level of stock prices. This opinion arose out of as honest as possible an evaluation of the available technical statistics and has been repeatedly expressed in the belief that awareness of these statistics would be of value to the investor. We are, nonetheless, cognizant of the fact that we may have come to sound like a broken record with our repetitive arguments for caution. So we propose this week to examine the bullish case, or at least to try to evaluate what upside possibilities appear to exist at the present time–playing the role, perhaps, of our own devil's advocate. To begin with, the popular averages have remained, essentially, locked in trading ranges since the early part of 1972. In the case of the Dow, the top of this trading range is at around the 980 level on an intra-day basis, this figure having been approached in April, May, and again in August. The lower part of the range is at around 917, intra-day, which level was touched in early M3Y, June, and again in July, with a couple of days of July trading actually moving somewhat below that figure. The broader-based indicies exhibit essentially the same pattern, although with a slight upward bias, in that they were, on their August rally, able to move to newall-time high territory by a modest amount. Now it has been the supposition of this letter that this entire trading rarge would ultimatel, come to constitute an area of distribution, the reasons for this conclusion having been documented at some length.What we.want to examine here is the ar,guJnenttbjlLsuch.isnot,the.,.-,- on'case and that the trailing range will ultimately be penetrated the upside. ' n If we are to deSignate the March-September formation as intermediate-term in nature, the relevant short-term formation is a subsidiary trading range, delineated by 945 and 980, which contained the Dow in late August and early September. This area was penetrated on the down- side shortly after Labor Day, and it must be noted that the downside objective of that top, roughly 936, was attained at last week's low. The area around the low 930' s on the Dow is of more than passing interest from a technical point of view. It is, first of all, the general area where the index has bottomed three times before and thus constitutes a plausible sup- port level. Moveover it constitutes the bottom of a computer-calculated trend channelrunnirg from the November 1971 low to the August high. If a rally then were to occur, 930-935 was certainly a logical area to expect such a rally to begin. Indeed, just such a short term rally did, in fact, occur, sparked by peace rumors on Wednesday afternoon. It had sorre mearure of conviction,with a ten-point advance in the Dow, more than 1, 000 advanCing stocks, and, after some hesitation, a convincing follow-through in late Thursday's and early Friday's trading. The course of the present rally will be highly interesting, for it will determine whether our recent peSSimism has been well-timed or prematur If the advance, either immediately or after some period of basing, could carry through, on good breadth and volume, above the 974 level, it would suggest tha the March-September range did not have immediate downs ide implications an9 indicatethe.p'o,s sibilityof.a further – – -, -e-xt-ension- of—'-th-e -a-d-v-a-n-ce–fr-om–th-e- N-o–v-e-m-ber lows. -…… … – The question of how far such an advance might carry is an interesting one. The most plausible upside objective would be in the area of 1020, fairly close to the 1065 objective which this letter first suggested as long ago as October 1970. While relatively small on a percentage basis, such an advance could produce a worthwhile rise in individual stocks. While it must be considered a possibility, such an advance could hardly alter, in our, view, the evidence of long-term deterioration that has been manifesting itself throughout the past summer. The uncertainties which confront the current stock market will not be removed by another relatively modest leg up on the advance. What a rally would do, of course, is to buy time, giving the investor a more favorable climate to take the steps nec- essary to insure protection of his capital. Dow-Jones Industrials (1200 p.m.)958.31 S&P (1200 p.m.) 110.70 ANTHONY W. TAB ELL DELAFIELD, HARVEY, TAB ELL AVlT.rlt No stotemenl or expression of OPInU;ln or any other motler herein conlcllned n, or 15 to be deemed to be, directly or indIrectly, on offer or the OII;llollon of on offer to buy Of sell ony security referred 10 or mentioned The matter IS presented merely for the conver-lenCE of the subSCriber Whllel'le believe Ihe sources of our Informahan to be rellahle, we In no way reprenl or guarantee the accuracy thereof nor of the statements mude herein Any action 10 be talen by the subscriber should be based on h' own Investigation and information Janney Montgomery Scott, Inc, as a corporation, and Its offICers or employees, may now have, or may later toke, positions or trades In respect to any secvrilies mentioned In this or any future ,ssue, and such POSIllOn may be different from any views now or hereafter expressed In thIS or ony other lSue Janney Montgomery Scott, inc, which IS regIStered With the SEC os on Investment adVisor, may give adVIce to Its Investment adVISOry and other customers Independently of any statements mode ,n thIS or In any other ISsue Further ,nformat,on on any security mentioned herem IS ovodabte on request