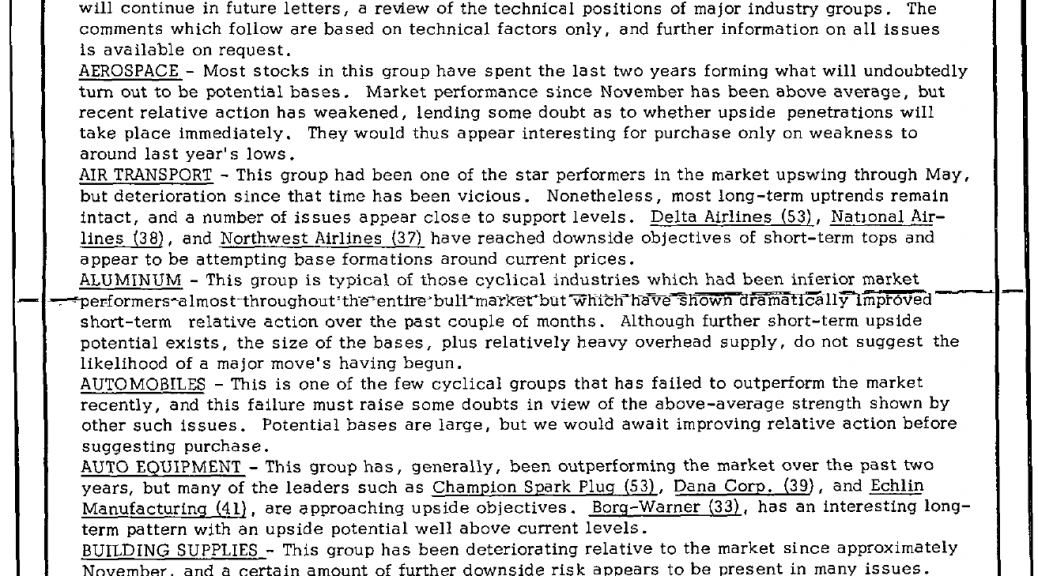 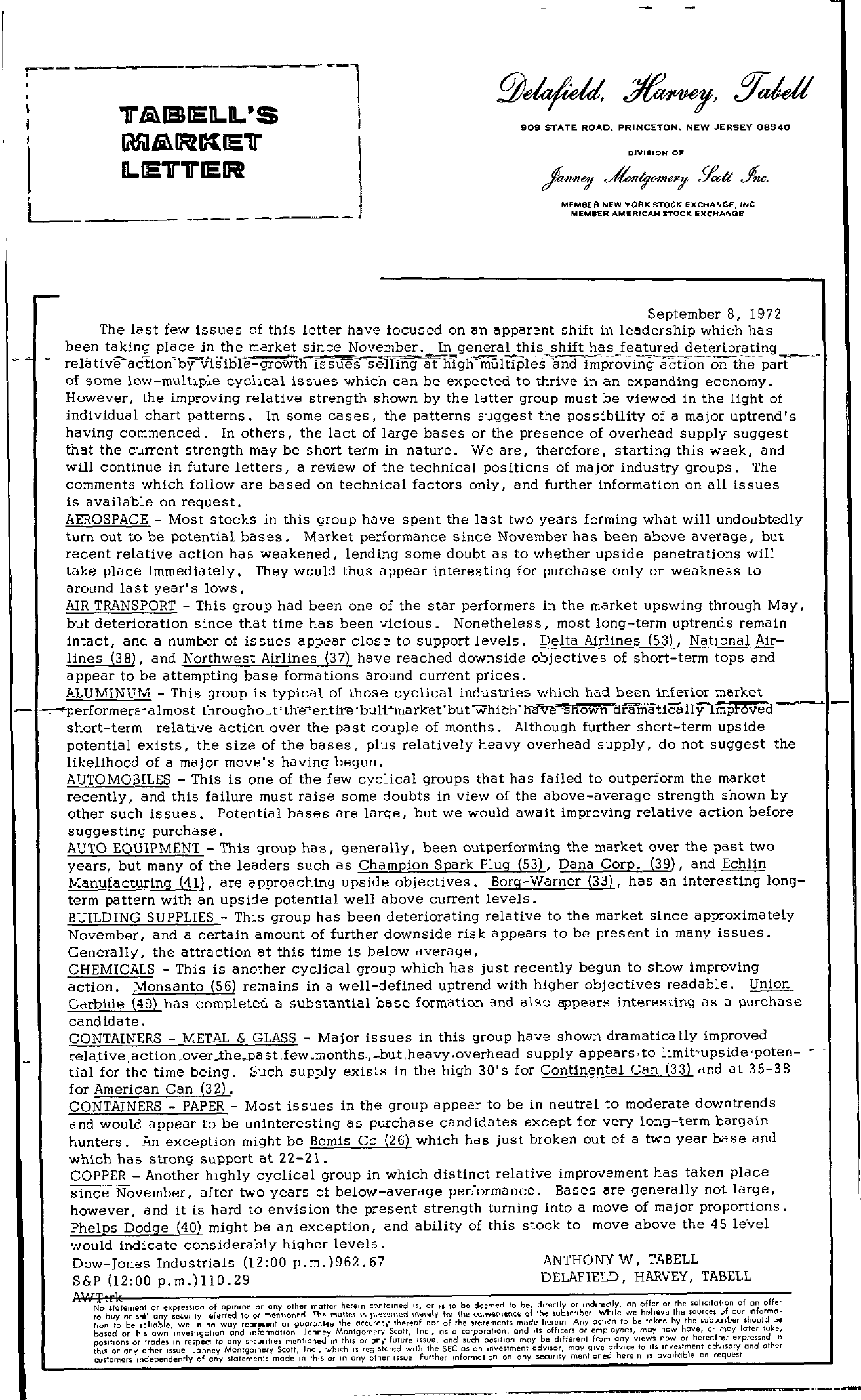 r– I j T li\JBIED..D..'S 1a1iIli\1RKIEV t D..1E11IER 909 STATE ROAD, PRINCETON. NEW JERSEY 08540 DIVISION OF MEM8ER NEW VORK STOCK eXCHANGe, INC MEMSER AMERICAN STOCK eXCHANGe September 8, 1972 The last few issues of this letter have focused on an apparent shift in leadership which has been taking place in the market since November. In general this shift has featured det-eriorating – relative-action'byvisible-growtli issues-sJun;;t lllgh–multlplerand Improving action on tl1e-pa of some low-multiple cyclical issues which can be expected to thrive in an expanding economy. However, the improving relative strength shown by the latter group must be viewed in the light of individual chart patterns. In some cases, the patterns suggest the possibility of a major uptrend's having commenced. In others, the lact of large bases or the presence of overhead supply suggest that the current strength may be short term in nature. We are, therefore, starting this week, and will continue in future letters, a review of the technical positions of major industry groups. The comments which follow are based on technical factors only, and further information on all issues is available on request. AEROSPACE – Most stocks in this group have spent the last two years forming what will undoubtedly tum out to be potential bases. Market performance since November has been above average, but recent relative action has weakened, lending some doubt as to whether upside penetrations will take place immediately. They would thus appear interesting for purchase only on weakness to around last year's lows. AIR TRANSPORT – This group had been one of the star performers in the market upswing through May, but deterioration since that time has been vicious. Nonetheless, most long-term uptrends remain intact, and a number of issues appear close to support levels. Delta Airlines (53), NatIOnal Air- lines (38), and Northwest Airlines (37) have reached downside objectives of short-term tops and appear to be attempting base formations around current prices. ALUMINUM – This group is typical of those cyclical industries which had been inferior market – erformers-a Imos t-throughout 'th-eentirebulYmarKet-but wh-i-CWl1av-e'Snown dra rna ticallYlmptoved short-term relative action over the past couple of months. Although further short-term upside potential exists, the size of the bases, plus relatively heavy overhead supply, do not suggest the likelihood of a major move's having begun. AUTOMOBILES – This is one of the few cyclical groups that has failed to outperform the market recently, and this failure must raise some doubts in view of the above-average strength shown by other such issues. Potential bases are large, but we would await improving relative action before suggesting purchase. AUTO EQUIPMENT – This group has, generally, been outperforming the market over the past two years, but many of the leaders such as Champion Spark Plug (53), Dana Corp. (39), and Echlin Manufacturing (41), are approaching upside objectives. Borg-Warner (33), has an interesting long- term pattern with an upside potential well above current levels. BUILDING SUPPLIES – This group has been deteriorating relative to the market since approximately November, and a certain amount of further downside risk appears to be present in many issues. Generally, the attraction at this time is below average. CHEMICALS – This is another cyclical group which has just recently begun to show improving action. Monsanto (56) remains in a well-defined uptrend with higher objectives readable. Union Carbide (49) has completed a substantial base formation and also appears interesting as a purchase candidate. CONTAINERS – METAL & GLASS – Major issues in this group have shown dramatica lly improved relative.action overthepast.few .months,bu-theavy.overhead supply appears.to limit-upside 'poten- – tial for the time being. Such supply exists in the high 30's for Continental Can (33) and at 35-38 for American Can (32). CONTAINERS – PAPER – Most issues in the group appear to be in neutral to moderate downtrends and would appear to be uninteresting as purchase candidates except for very long-term bargain hunters. An exception might be Bemis Co (26) which ha s just broken out of a two year ba s e and which has strong support at 22-21. COPPER – Another highly cyclical group in which distinct relative improvement has taken place since November, after two years of below-average performance. Bases are generally not large, however, and it is hard to envision the present strength turning into a mOve of major proportions. Phelps Dodge (40) might be an exception, and ability of this stock to mOve above the 45 level would indicate considerably higher levels. Dow-Jones Industrials (1200 p.m.)962.67 S&P (1200 p.m.)1l0.29 ANTHONY W. TABELL DELAFIELD, HARVEY, TABELL f)NT.Fh No statement Qf eXpreSSion of opInion or any other matler herein contained IS, or IS to be det!med to be, directly or ,ndlrectly. on offer or the sollcltat,on of on offer to buy or sell any seC\Jr,iy referred to 01 menhoned The mOllel I pft'.senied ITIHely fof the CCI'I'Iel'ltnce of the subSCriber Whde we believe the sources of our mformotlon 10 be relloble, we In no way represent or guo ron tee the accuracy thereof nor of Ihe statements mudc herc,n Any action 10 be token by the subscnber should be bosed on hiS own Investigation and mformotlon Janney Montgomery Scott, Inc, as a corporation, and lIs officers or employee may now have, or may loter lake, POSitiOnS or trodes In respect to any SeCUrities mentIOned In thiS or any future Issue, and such posdian may be different from any views now or hereafter el'pressed on thiS or any other Issue Janney MontgOrTlery Scott, Inc, whICh IS registered with the SEC as an Investment adVisor, may give adVice to ItS Investment adVisory and cthe. customers Irldependently of any statements made on Ih,s or on any olher Issue Further ,nformation on any security mentioned herein IS available on request