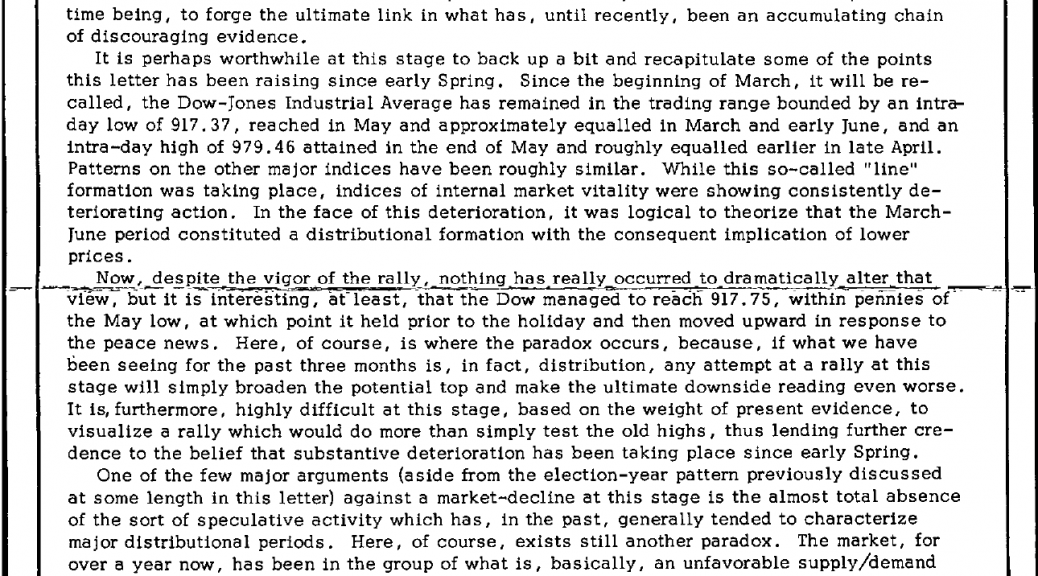 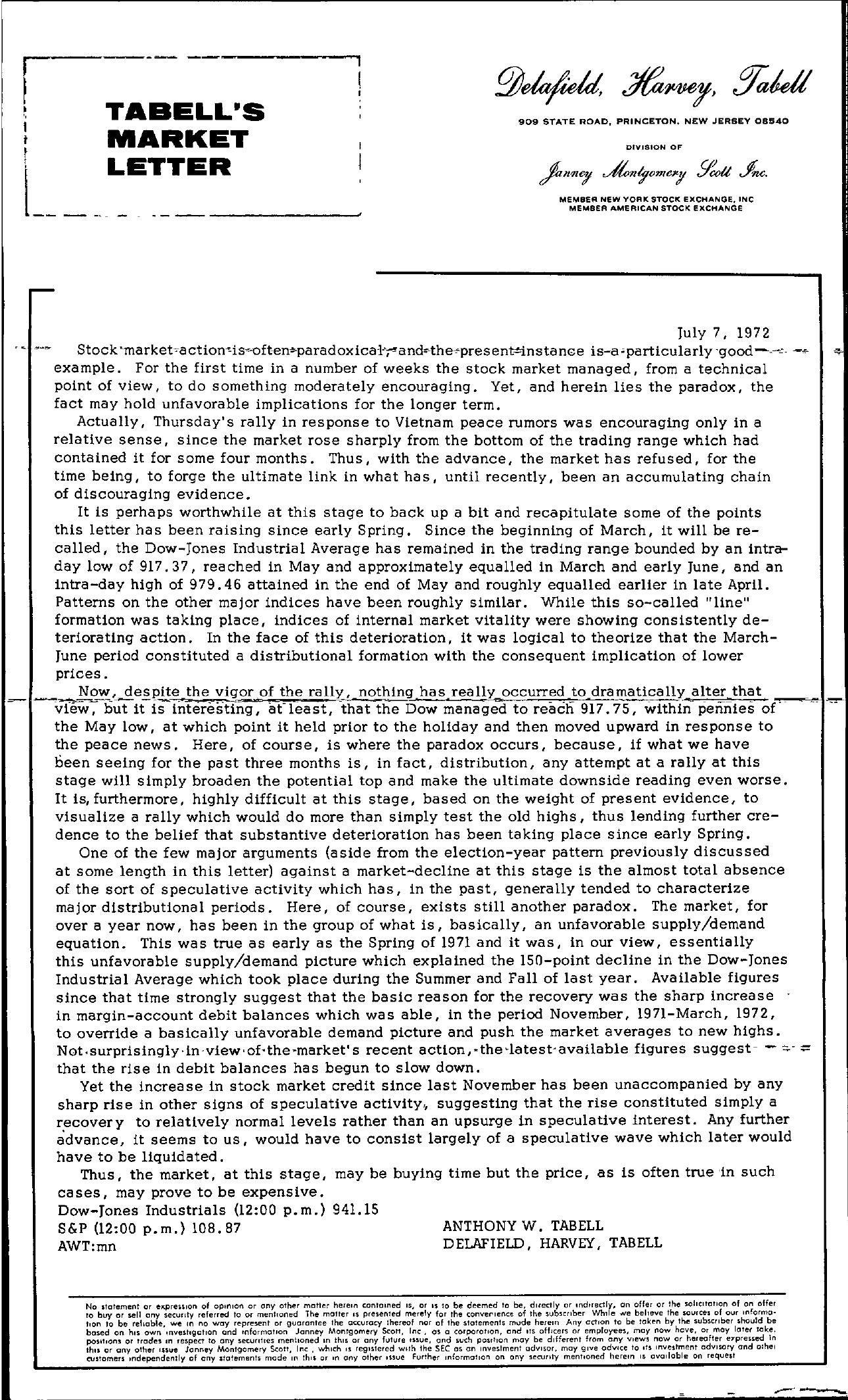 TABELL'S MARKET LETTER – — – ——- 909 STATE ROAD, PRINCETON. NEW JERSEY 08540 DIVISION OF MEMBER NEW YORI( STOCK eXCHANGe, INC MEMBER AMERICAN STOCK eXCHANGe July 7, 1972 Stock cmarketca ctionisoftenparadoxicai;' and-thepres entc!instanGe isa' particularly 'good -.-c – example. For the first time in a number of weeks the stock market managed, from a technical pOint of view, to do something moderately encouraging. Yet, and herein lies the paradox, the fact may hold unfavorable implications for the longer term. Actually, Thursday's rally in response to Vietnam peace rumors was encouraging only in a relative sense, since the market rose sharply from the bottom of the trading range which had contained it for some four months. Thus, with the advance, the market has refused, for the time being, to forge the ultimate link in what has, until recently, been an accumulating chain of discouraging eVidence. It is perhaps worthwhile at this stage to back up a bit and recapitulate some of the points this letter has been raising since early Spring. Since the beginning of March, it will be re- called, the Dow-Jones Industrial Average has remained in the trading range bounded by an intra- day low of 917.37, reached in May and approximately equalled in March and early June, and an intra-day high of 979.46 attained in the end of May and roughly equalled earlier in late April. Patterns on the other major indices have been roughly similar. While this so-called line formation was taking place, indices of internal market vitality were showing conSistently de- teriorating action. In the face of this deterioration, it was logical to theorize that the March- June period constituted a distributional formation with the consequent implication of lower prices. -vfEl,Nocwb,Utdietisspiintetetnh3setvi;ig;ogr,ofafthleearsatl,lyt,hantotthheingDohwasmraenaallgyedoctcourrereadc t h o dramat 917.75, ically alter tha within pennies tof-'-….\— the May low, at which point it held prior to the holiday and then moved upward in response to the peace news. Here, of course, is where the paradox occurs, because, if what we have been seeing for the past three months is, in fact, distribution, any attempt at a rally at this stage will simply broaden the potential top and make the ultimate downside reading even worse. It is, furthermore, highly difficult at this stage, based on the weight of present evidence, to visualize a rally which would do more than simply test the old highs, thus lending further cre- dence to the belief that substantive deterioration has been taking place since early Spring. One of the few major arguments (aside from the election-year pattern previously discussed at some length in this letter) against a market-decline at this stage is the almost total absence of the sort of speculative activity which has, in the past, generally tended to characterize major distributional periods. Here, of course, exists still another paradox. The market, for over a year now, has been in the group of what is, basically, an unfavorable supply/demand equation. This was true as early as the Spring of 1971 and it was, in our view, essentially this unfavorable supply/demand picture which explained the ISO-point decline in the Dow-Jones Industrial Average which took place during the Summer and Fall of last year. Available figures since that time strongly suggest that the basiC reason for the recovery was the sharp increase in margin-account debit balances which was able, in the period November, 1971-March, 1972, to override a basically unfavorable demand picture and push the market averages to new highs. Not.surprisingly-in view,ofthe-market' s recent action, -the -latest-available figures suggest – – — that the rise in debit balances has begun to slow down. Yet the increase in stock market credit since last November has been unaccompanied by any sharp rise in other signs of speculative activity suggesting that the rise constituted simply a recovery to relatively normal levels rather than an upsurge in speculative interest. Any further advance, it seems to us, would have to consist largely of a speculative wave which later would have to be liquidated. Thus, the market, at this stage, may be buying time but the price, as is often true 'in such cases, may prove to be expensive. Dow-Jones Industrials (1200 p.m.) 941.15 S&P (1200 p.m.) 108.87 AWTmn ANTHONY W. TAB ELL DELAFIELD, HARVEY, TABELL No statement ar exprenlon of opinion or any other motter here'n contolned IS, or 1 to be deemed to be, directly or mdlrectly, on offer or the SOllCIlolion of on offer to buy or sell any security referred to or menhoned The molter IS presented merely for The convellence of the subSCriber While 'i'le believe tne sources of our Informehon to be relloble, we In no woy represent or guarantee tne accuracy tnereof nor of tne statements mude nerem Any action 10 be taken by tne subscriber snould be based on nls own inVeStigation and information Janney Montgomery Scali, Inc, as a corporotlon, and lIS offICers or employees, may now nave, or moy later lake, poslhans or trades In respect to any securthes mentioned In thiS or any future Issue, and such posItIon may be different from any VIews now or hereofter e)'pressed In tnn or any other Issue Janney Montgomery 5011, Inc, WhlCn IS regIStered WIth the SEC 0 an Investment adVisor, may give adVice to Its Investment adVisory and othel customers Independently of any statements made In thl or In ony otner ISsue Furtner information on ony security mentIoned herein IS availoble on request