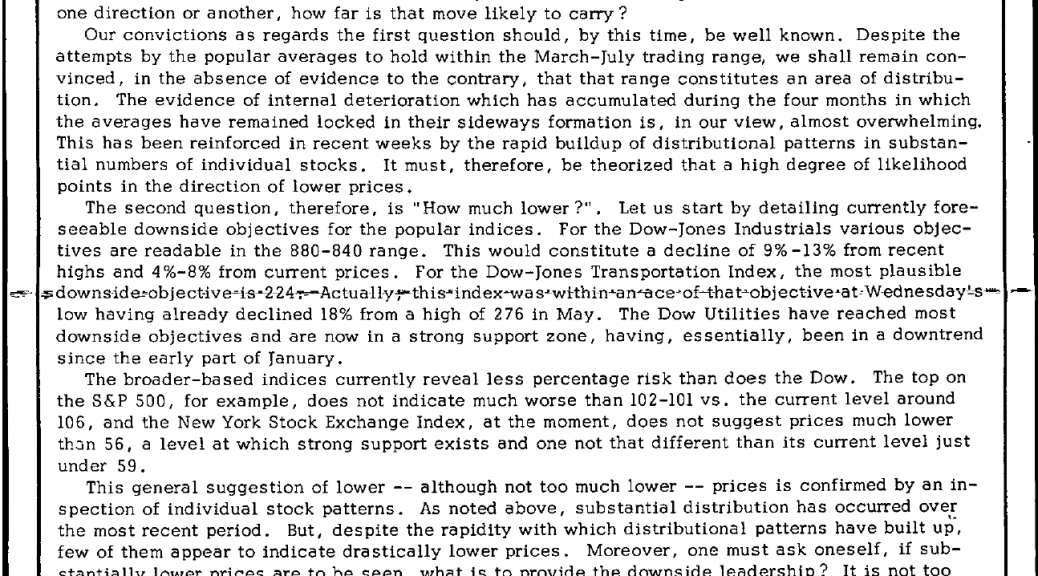 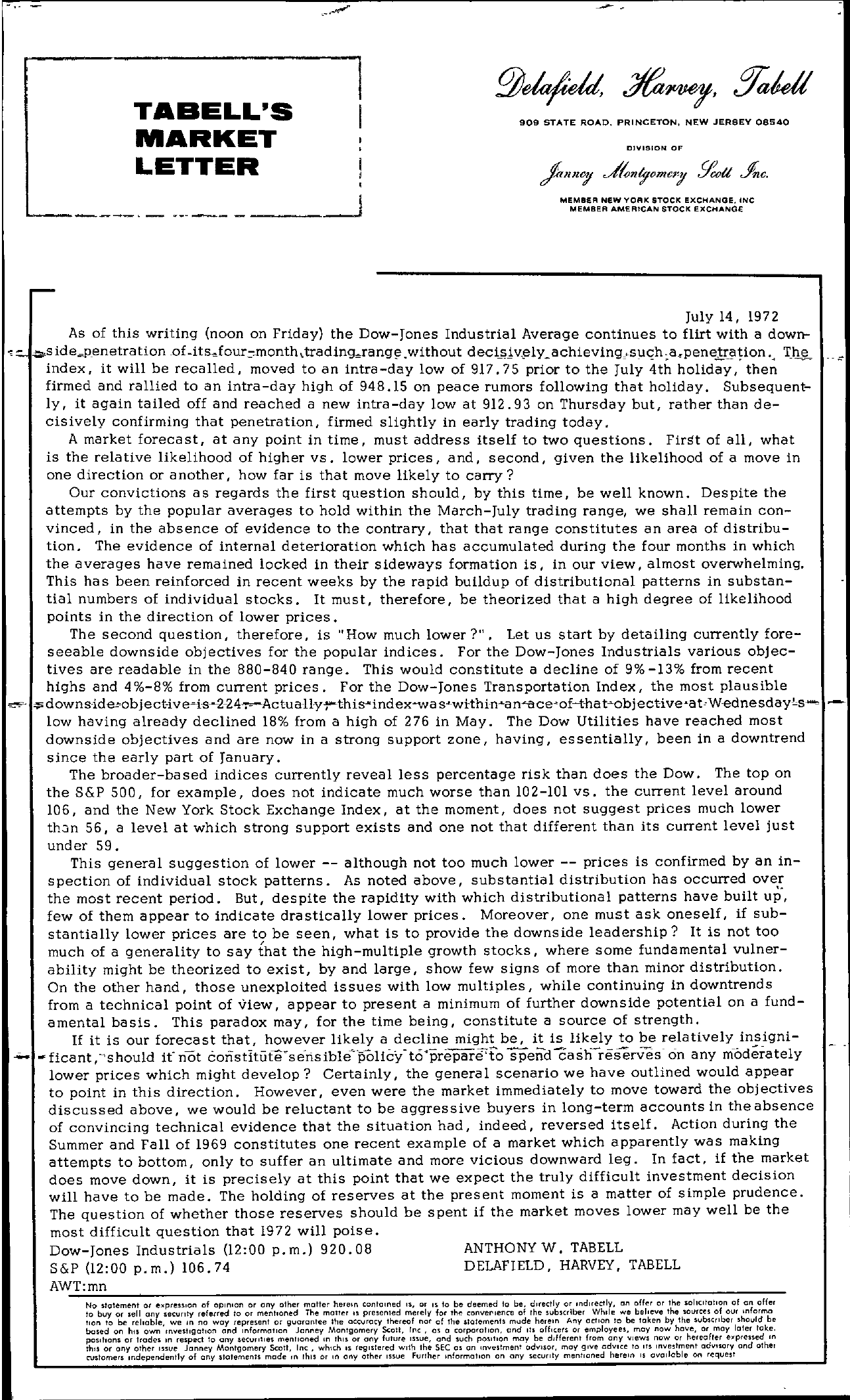 TABELL'S MARKET LETTER '– . -.l 909 STATE ROAD. PRINCETON. NEW JERSEY 08540 DIVISION OF MEMBER NEW YORK STOCK EXCHANGE, INC MEMBER AMERICAN STOCK EXCHANGE July 14, 1972 As of this writing (noon on Friday) the Dow-Jones Industrial Average continues to flirt with a down- – sidepenetration ofitsfour-J11onth ,tradingrang without dectsvely- achieving.such .a, pene.tration. The index, it will be recalled, moved to an intra-day low of 917.75 prior to the July 4th holiday; the – — firmed and rallied to an intra-day high of 948.15 on peace rumors following that holiday. Subsequently, it again tailed off and reached a new intra-day low at 912.93 on Thursday but, rather than decisively confirming that penetration, firmed slightly in early trading today. A market forecast, at any pOint in time, must address itself to two questions. First of all, what is the relative likelihood of higher vs. lower prices, and, second, given the likelihood of a move in one direction or another, how far is that move likely to carry 7 Our convictions as regards the first question should, by this time, be well known. Despite the attempts by the popular averages to hold within the March-July trading range, we shall remain convinced, in the absence of evidence to the contrary, that that range constitutes an area of distribu- tion. The evidence of internal deterioration which has accumulated during the four months in which the averages have remained locked in their sideways formation is, in our view, almost overwhelming. This has been reinforced in recent weeks by the rapid buildup of distributional patterns in substan- tial numbers of individual stocks. It must, therefore, be theorized that a high degree of likelihood points in the direction of lower prices. The second question, therefore, is How much lower 7. Let us start by detailing currently fore- seeable downside objectives for the popular indices. For the Dow-Jones Industrials various obJectives are readable in the 880-840 range. This would constitute a decline of 9 -13 from recent highs and 4-8 from current prices. For the Dow-Jones Transportation Index, the most plausible ' d owns-id eob ject-iv ei-s224Actu aHy–th is index'wa swi-thi-na n ce of–tha tobj ect!ve'a t-W-ed ne sdays low having already declined 18 from a high of 276 in May. The Dow Utilities have reached most downside objectives and are now in a strong support zone, having, essentially, been in a downtrend since the early part of January. The broader-based indices currently reveal less percentage risk than does the Dow. The top on the S&P 500, for example, does not indicate much worse than 102-101 vs. the current level around 106, and the New York Stock Exchange Index, at the moment, does not suggest prices much lower thm 56, a level at which strong support exists and one not that different than its current level just under 59. This general suggestion of lower — although not too much lower — prices is confirmed by an in- spection of individual stock patterns. As noted above, substantial distribution has occurred over the most recent period. But, despite the rapidity with which distributional patterns have built up, few of them appear to indicate drastically lower prices. Moreover, one must ask oneself, if sub- stantially lower prices are to be seen, what is to provide the downside leadership 7 It is not too much of a generality to say that the high-multiple growth stocks, where some fundamental vulner- ability might be theorized to exist, by and large, show few signs of more than minor distribution. On the other hand, those unexploited issues with low multiples, while continuing in downtrends from a technical point of view, appear to present a minimum of further downside potential on a fundamental basis. This paradox may, for the time being, constitute a source of strength. If it is our forecast that, however likely a decline might be, it is likely to be relatively insigni- ficant,should if not consthiite'sertsible-j'iolicyto'prepare-fO spenacash-reserves on any m-oderately lower prices which might develop 7 Certainly, the general scenario we have outlined would appear to point in this direction. However, even were the market immediately to move toward the objectives discussed above, we would be reluctant to be aggressive buyers in long-term accounts in the absence of convincing technical evidence that the situation had, indeed, reversed itself. Action during the Summer and Fall of 1969 constitutes one recent example of a market which apparently was making attempts to bottom, only to suffer an ultimate and more vicious downward leg. In fact, if the market does move down, it is precisely at this point that we expect the truly difficult investment decision will have to be made. The holding of reserves at the present moment is a matter of simple prudence. The question of whether those reserves should be spent if the market moves lower may well be the most difficult question that 1972 will poise. Dow-Jones Industrials (1200 p.m.) 920.08 S&P (1200 p.m.) 106.74 ANTHONYW. TABELL DELAFIELD, HARVEY, TABELL AWTmn No stolement or expressIon of opinIon or any olher motter hereIn contolned IS, or IS 10 be deemed 10 be, dIrectly or ind,rectly, on offer or the solICItatIon of on offer to buy or sell any secunty referred to or mentioned The mOiler 15 presenled merely for the conver'lenCEl of the subscriber WhIle we believe Ihe sources of our Informa lIon 10 be reliable, we In no way represent or guarantee the accuracy thereof nor of the statements mude herein Any octlon 10 be token by the subscriber should be based on h,s own Inveshgotlon and Informotlon Janney Montgomery Scoil, Inc, os a corporatIon, and lis offICers or employees, may now have, or may later toke, posItions or trades In respect 10 any seculles mentIoned In Ih,s or any future Inue, and such pOSItion moy be dIfferent from any vIews now or hereafter e,pressed In thu or any other Issue Jonney Montgomery Scott, Inc, whIch IS regIstered WIth Ihe SEC 05 on Investment adVisor, may gIve adVice to 115 Investment adVISory and othel customers Independently of any statements mode In thiS or In any other Issue Further information on any security mentlaned hereIn IS avollable on request