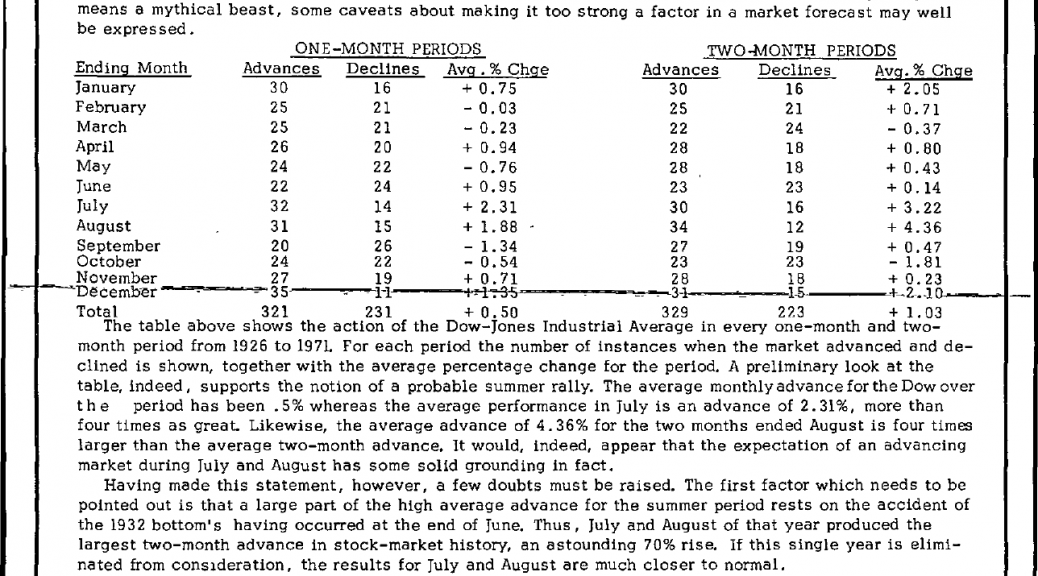 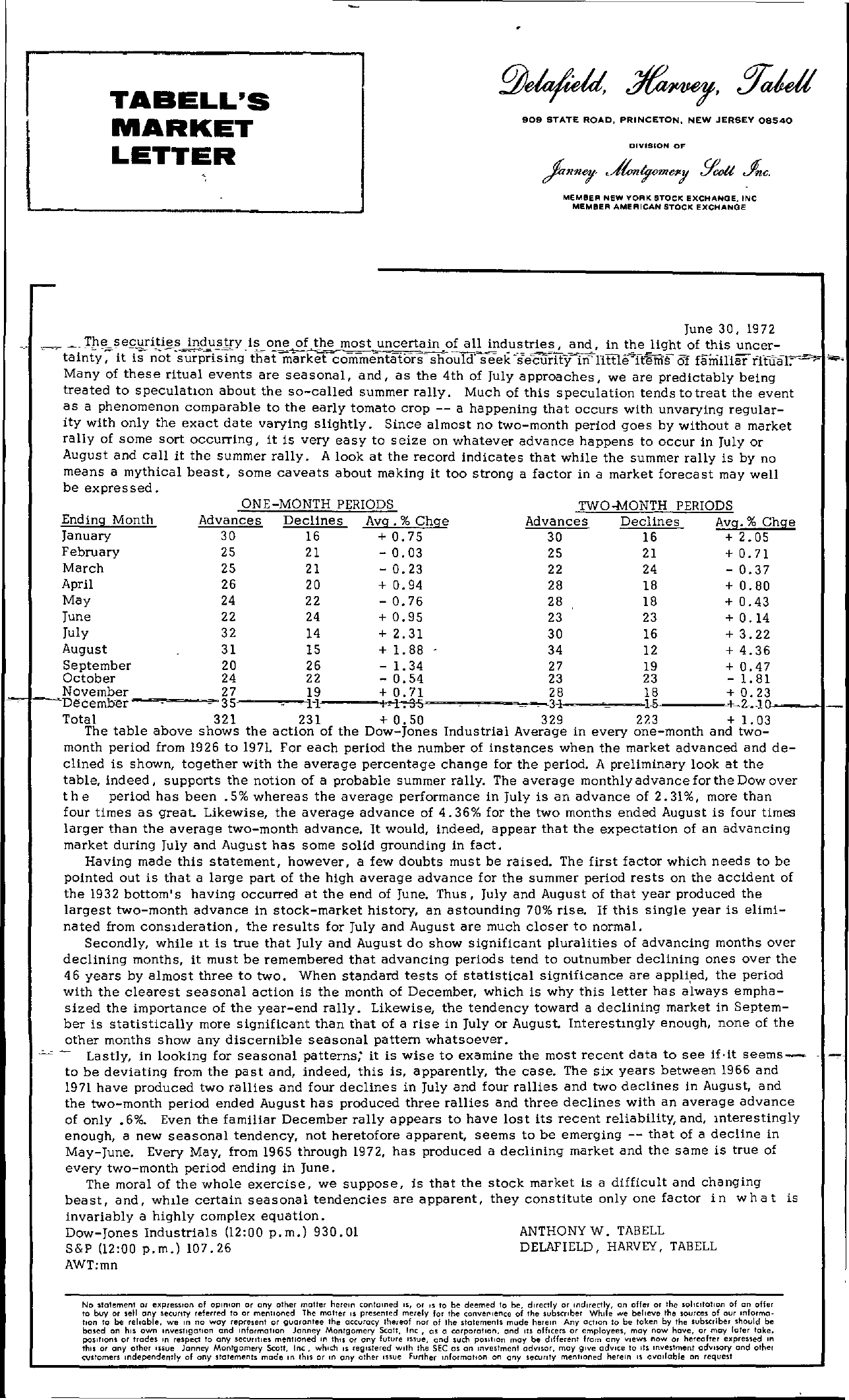 TABELL'S MARKET LETTER 909 STATE ROAD, PRINCETON. NEW JERSEY 08540 DIVISION OF MEMBER New YORK STOCK EXCHANGE. INC MEMBER AMERICAN STOCK eXCHANGE – June 30, 1972 T)1esefi!i,E1!Y l o,fJhe most ,uncerta.in o!l i,dysyies–,- nd , in the light of this uncer- tainty, it is not surprising that market commentators should' seek 'security-in- nffieTts of fammar fftual' , Many of these ritual events are seasonal, and, as the 4th of July approaches, we are predictably being treated to speculatlOn about the so-called summer rally. Much of this speculation tends to treat the event as a phenomenon comparable to the early tomato crop — a happening that occurs with unvarying regular- ity with only the exact date varying slightly. Since almost no two-month period goes by without a market rally of some sort occurring, it is very easy to seize on whatever advance happens to occur in July or August and call it the summer rally. A look at the record indicates that while the summer rally is by no means a mythical beast, Some caveats about making it too strong a factor in a market forecast may well be expressed. ONE-MONTH PERIODS TWO-MONTH PERIODS Ending Month Advances Declines Avg . Chge Advances Declines Avg. Chge January 30 16 0.75 30 16 2.05 February 25 21 -0.03 25 21 0.71 March 25 21 – 0.23 22 24 – 0.37 April 26 20 0.94 28 18 0.80 May 24 22 -0.76 28 18 0.43 June 22 24 0.95 23 23 0.14 July 32 14 2.31 30 16 3.22 August 31 15 1.88 34 12 4.36 September October November December 20 24 27 . 35 26 – 1.34 22 – 0.54 19 0.71 ' 1-1 '15 27 19 0.47 23 23 – 1.81 28 18 0.23 31 1-5 -2,.10 -1 Total 321 231 0.50 329 223 1.03 The table above shows the action of the Dow-Jones Industrial Average in every one-month and two- month period from 1926 to 1971. For each period the number of instances when the market advanced and de- clined is shown, together with the average percentage change for the period. A preliminary look at the table, indeed, supports the notion of a probable summer rally. The average monthly advance for the Dow over the period has been .5 whereas the average performance in July is an advance of 2.31, more than four times as great. Likewise, the average advance of 4.36 for the two months ended August is four times larger than the average two-month advance. It would, indeed, appear that the expectation of an advancing market during July and August has some solid grounding in fact. Having made this statement, however, a few doubts must be raised. The first factor which needs to be pOinted out is that a large part of the high average advance for the summer period rests on the accident of the 1932 bottom's having occurred at the end of June. Thus, July and August of that year produced the largest two-month advance in stock-market history, an astounding 70 rise. If this single year is elimi- nated from conslderation, the results for July and August are much closer to normal. Secondly, while lt is true that July and August do show significant pluralities of advancing months over declining months, it must be remembered that advancing periods tend to outnumber declining ones over the 46 years by almost three to two. When standard tests of statistical Significance are appli,ed, the period with the clearest seasonal action is the month of December, which is why this letter has always empha- sized the importance of the year-end rally. Likewise, the tendency toward a declining market in Septem- ber is statistically more significant than that of a rise in July or August. Interestmgly enough, none of the other months show any discernible seasonal pattern whatsoever. Lastly, in looking for seasonal patterns/ it is wise to examine the most recent data to see ifit seems- to be deviating from the past and, indeed, this is, apparently, the case. The six years between 1966 and 1971 have produced two rallies and four declines in July and four rallies and two declines in August, and the two-month period ended August ha s produced three rallies and three declines with an average advance of only 6o/ Even the familiar December rally appears to have lost its recent reliability, and, mterestingly enough, a new seasonal tendency, not heretofore apparent, seems to be emerging — that of a decline in May-June. Every May, from 1965 through 1972, has produced a declining market and the same is true of every two-month period ending in June. The moral of the whole exercise, we suppose, is that the stock market is a difficult and changing beast, and, whlle certain seasonal tendencies are apparent, they constitute only one factor in what is invariably a highly complex equation. Dow-Jones Industrials (1200 p.m.) 930.01 S&P (1200 p.m.) 107.26 ANTHONY W. TABEI.1. DEl.AFIELD, HARVEY, TABEI.L AWTmn No 'talemenl or expressIon of opinIon or any other moiler herein contolOed IS, or . to be deemed to be, directly or indirectly, on offer or Ihe SOIIC.lollon of on offer to buy or sell any security referred 10 or mentIoned The molter IS presented merely for the conver'!cnce of Ihe subscrIber While oNe believe the sources of our information to be reltoble, we In no way represent or guoranlee Ihe accuracy thereof nor of the statements mude herein Any actIOn to be token by the subscriber should be bIlsed on hiS own Investigation and Information Janney Montgomery Scott, Inc. 05 a COrporatIon, and lIS offIcers or employees, may now hove, or moy loler toke, poSitions or trades In respect to any seCUrities mentioned In thIS or ony future Issue, and such POSitiOn may be different fram any views now or hereofter expreued In thiS or (my other Issue Janney Montgomery colt, Inc, which 1 registered With the SEC as on Investmen! adVisor, may give adVice 10 Its Investment adVISOry and othel evstomers Independently of any statements made In thiS or In any other Issue Further mformotlon on any security mentioned herein 1 ovollable on request