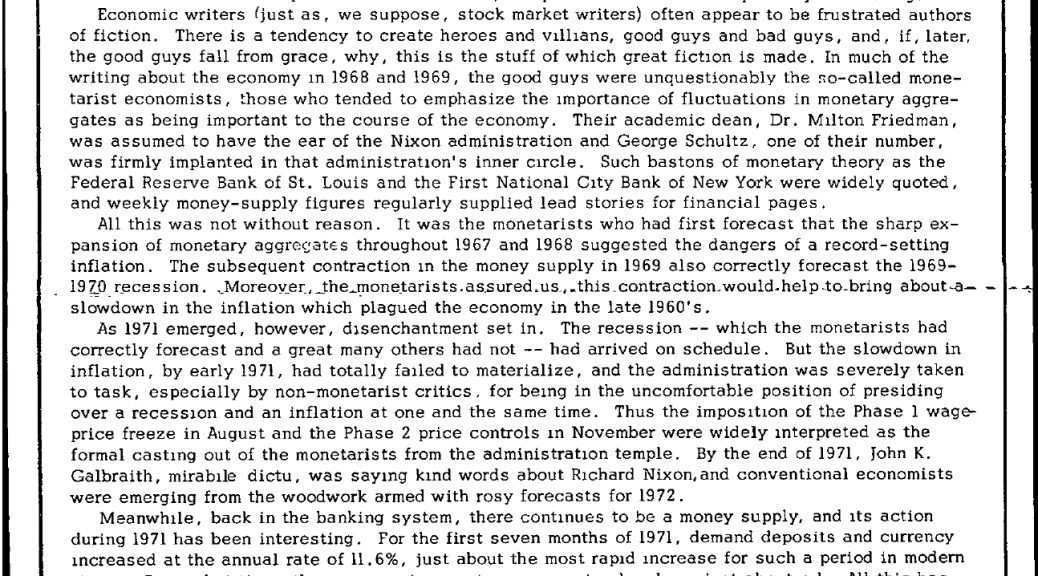 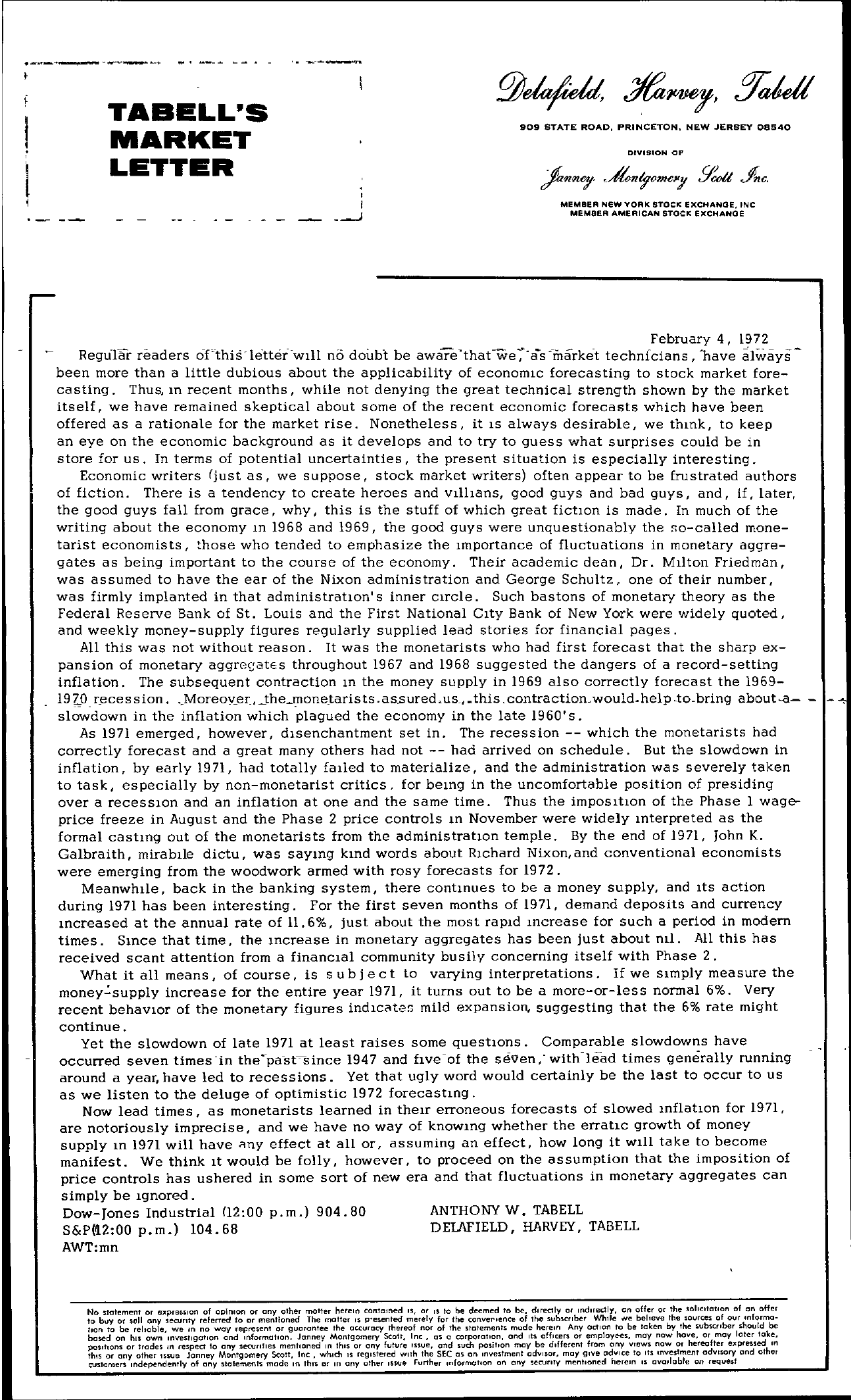 I TABELL'S MARKET I LETTER , I -.J 909 STATE ROAD, PRINCETON, NEW JERSEY 08540 DIVISION OF MEMBER NEW YORK STOCK EXCHANGE, INC MEMOER AMERICAN STOCK EXCHANGE February 4, 1972 ReguTar readers orthhdelterwlll no doubt be aware'thatwe'a's'-market technfcians, 'have alwayS– been more than a little dubious about the applicability of economIC forecasting to stock market fore- casting. Thus, m recent months, while not denying the great technical strength shown by the market itself, we have remained skeptical about some of the recent economic forecasts which have been offered as a rationale for the market rise. Nonetheless, it IS always desirable, we thmk, to keep an eye on the economic background as it develops and to try to guess what surprises could be in store for us. In terms of potential uncertainties, the present situation is especially interesting. Economic writers (just as, we suppose, stock market writers) often appear to be frustrated authors of fiction. There is a tendency to create heroes and vllhans, good guys and bad guys, and, if, later. the good guys fall from grace, why, this is the stuff of which great fictIOn is made. In much of the writing about the economy m 1968 and 1969, the good guys were unquestionably the o-called mone- tarist economists, those who tended to emphasize the Importance of fluctuations in monetary aggre- gates as being important to the course of the economy. Their academic dean, Dr. Milton Friedman, was assumed to have the ear of the Nixon administration and George Schultz, one of their number, was firmly implanted in that administration's inner circle. Such bastons of monetary theory as the Federal Reserve Bank of St. Louis and the First National CIty Bank of New York were widely quoted, and weekly money-supply figures regularly supplied lead stories for financial pages. All this was not without reason. It was the monetarists who had first forecast that the sharp ex- pansion of monetary aggf8;atEs throughout 1967 and 1968 suggested the dangers of a record-setting inflation. The subsequent contraction m the money supply in 1969 also correctly forecast the 1969- 19 Zp. ceces sion . .Moreover, themoneJarists .as.sured .us., .this .contraction.would. help .to.bring abouta- slowdown in the inflation which plagued the economy in the late 1960's. As 1971 emerged, however, dIsenchantment set in. The recession — which the monetarists had correctly forecast and a great many others had not — had arrived on schedule. But the slowdown in inflation, by early 1971, had totally failed to materialize, and the administration was severely taken to task, especially by non-monetarist critics. for bemg in the uncomfortable position of presiding over a recessIOn and an inflation at one and the same time. Thus the impOSItion of the Phase 1 wage- price freeze in August and the Phase 2 price controls m November were widely mterpreted as the formal castmg out of the monetarists from the administration temple. By the end of 1971, John K. Galbraith, mirablle dictu, was saymg kmd words about RIchard Nixon, and conventional economists were emerging from the woodwork armed with rosy forecasts for 1972. MeanwhIle, back in the banking system, there continues to be a money supply, and ItS action during 1971 has been interesting. For the first seven months of 1971, demand deposits and currency mcreased at the annual rate of II. 6, just about the most rapId mcrease for such a period in modem times. Smce that time, the mcrease in monetary aggregates has been just about mI. All this has received scant attention from a financIal community busily concerning itself with Phase 2. What it all means, of course, is sub j e c t to varying interpretations. If we SImply measure the money'supply increase for the entire year 1971, it turns out to be a more-or-Iess normal 6. Very recent behaVIOr of the monetary figures ind,cat3s mild expansion, suggesting that the 6 rate might continue. Yet the slowdown of late 1971 at least raises some questIOns. Comparable slowdowns have occurred seven times-in the'-pa-st-cgince 1947 and five-of the seven; with' lead times generally running around a year, have led to recessions. Yet that ugly word would certainly be the last to occur to us as we listen to the deluge of optimistic 1972 forecastmg. Now lead times, as monetarists learned in theIr erroneous forecasts of slowed mflatlon for 1971. are notoriously imprecise, and we have no way of knowmg whether the erratIc growth of money supply m 1971 will have i'my effect at all or, assuming an effect, how long it WIll take to become manifest. We think It would be folly, however. to proceed on the assumption that the imposition of price controls has ushered in some sort of new era and that fluctuations in monetary aggregates can Simply be Ignored. Dow-Jones Industrial 11200 p.m.) 904.80 S&P(1200 p.m.) 104.68 ANTHONY W. TABELL DELAFIELD, HARVEY, TABELL AWTmn —. No statement or expression of opinion or any olher moHer herein contamed 1, or IS to be deemed to be, directly or IIld.rec;tly. on offer or the SOI,c,lotlon of on oHer to buy or sell cny security referred to or mentioned The matter 15 p-esenled merely for the converlenee of The subKl'lber While we beheve The sources of our Informohon to be reliable, we In no way represent or guarantee Ihe accuracy Thereof nor of Ihe slolements mude herein Any aellOn 10 be token by the s\lbscrober sho\lld be based on hiS own InvesTigation and Information. Janney Montgomery Scott, Inc, a a corporation, and lis offlce or employees, may now have, or may laler lake, positrons or trodes In respect to any sec\lrltles menltoned In thrs or any f\llvre ISS\le, and S\lch position may be different from af'ly views now or hereafter epressed In thiS or any other Issue Janney Montgomery Scott, Inc, which IS registered With the SEC as on Investment adVisor, may give adVice To Its Investment adviSOry and other customers Independently of any statements made In thIS or In any other Issue Further Information on any seo.mtv menhoned hereen IS avalloble on feque!