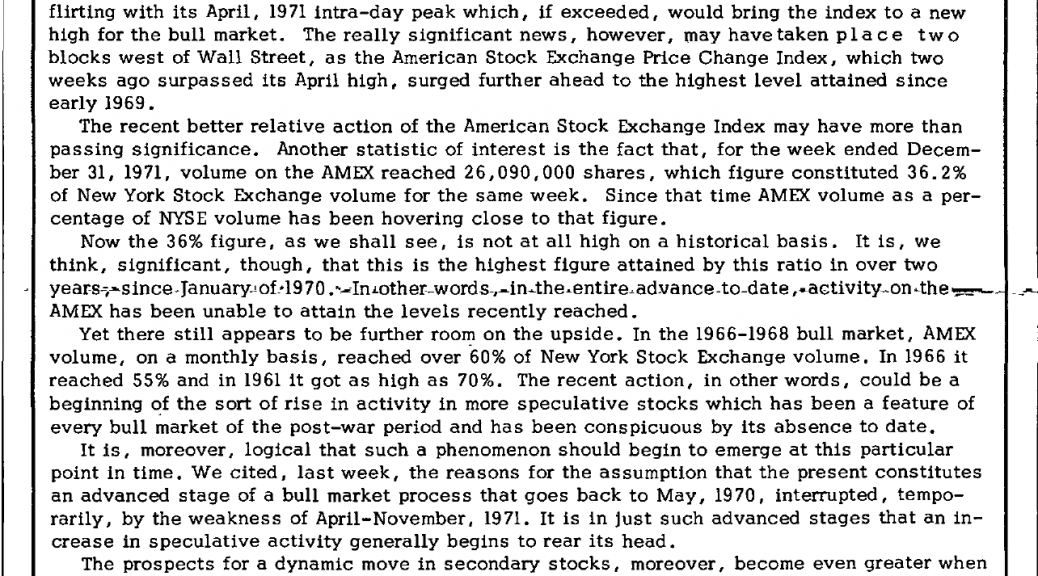 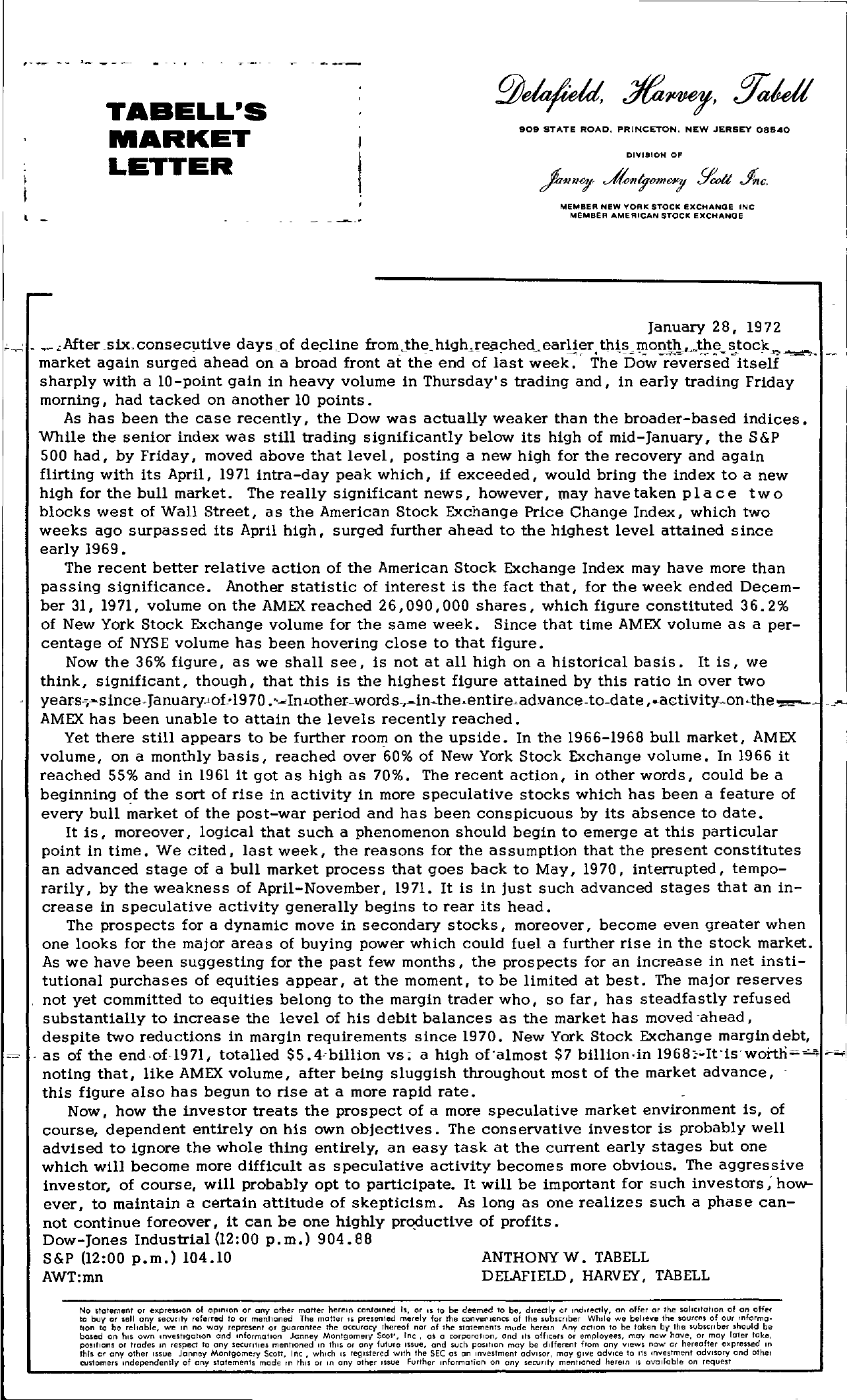 TABELL'S MARKET LETTER .- 909 STATE ROAD. PRINCETON. NEW JERSEY 08540 DIVISION OF MEMBER NEW VORk STOCK EXCHANGE INC MEMBEfl AMERICAN STOCK EXCHANGE January 28, 1972 . ,Mtersix. consecJ.1tive days .of decline fromJhe. highreg.ched. earlJr. th!s. Il!0t,-I tock.., market again surged ahead on a broad front at the end of last week. The Dow reversed itself sharply with a lO-point gain in heavy volume in Thursday's trading and, in early trading Friday morning, had tacked on another 10 points. As has been the case recently, the Dow was actually weaker than the broader-based indices. While the senior index was still trading significantly below its high of mid-January, the S&P 500 had, by Friday, moved above that level. posting a new high for the recovery and again flirting with its April. 1971 intra-day peak which. if exceeded. would bring the index to a new high for the bull market. The really significant news, however. may have taken pIa c e two blocks west of Wall Street. as the American Stock Exchange Price Change Index, which two weeks ago surpassed its April high, surged further ahead to the highest level attained since early 1969. The recent better relative action of the American Stock Exchange Index may have more than passing significance. Another statistic of interest is the fact that, for the week ended Decem- ber 31, 1971. volume on the AMEX reached 26,090,000 shares, which figure constituted 36.2 of New York Stock Exchange volume for the same week. Since that time AMEX volume as a per- centage of NYSE volume has been hovering close to that figure. Now the 36 figure, as we shall see, is not at all high on a historical basis. It is, we think, significant. though, that this is the highest figure attained by this ratio in over two —years-'isince- JanuaryJ of19 70 …-InLother-words-.in-the.entireadvance.to-date ,activity-on ,the . AMEX has been unable to attain the levels recently reached. Yet there still appears to be further room on the upside. In the 1966-1968 bull market, AMEX volume, on a monthly basis, reached over 60 of New York Stock Exchange volume. In 1966 it reached 55 and in 1961 it got as high as 70. The recent action, in other words, could be a beginning of the sort of rise in activity in more speculative stocks which has been a feature of every bull market of the post-war period and has been conspicuous by its absence to date. It is, moreover, logical that such a phenomenon should begin to emerge at this particular point in time. We cited, last week, the reasons for the assumption that the present constitutes an advanced stage of a bull market proces s that goes back to May, 1970, interrupted, tempo- rarily, by the weakness of April-November, 1971. It is in just such advanced stages that an in- crease in speculative activity generally begins to rear its head. The prospects for a dynamic move in secondary stocks, moreover. become even greater when one looks for the major areas of buying power which could fuel a further rise in the stock market. As we have been suggesting for the past few months, the prospects for an increase in net insti- tutional purchases of equities appear, at the moment, to be limited at best. The major reserves not yet committed to equities belong to the margin trader who, so far, has steadfastly refused substantially to increase the level of his debit balances as the market has moved -ahead, despite two reductions in margin requirements since 1970. New York Stock Exchange margin debt, – as of the endof-1971, totalled S.4-billion vs; a high of 'almost 7 billionin 1968iIt'is-woitti I noting that, like AMEX volume, after being sluggish throughout most of the market advance, this figure also has begun to rise at a more rapid rate. Now, how the investor treats the prospect of a more speculative market environment is, of course, dependent entirely on his own objectives. The conservative investor is probably well advised to ignore the whole thing entirely, an easy task at the current early stages but one which will become more difficult as speculative activity becomes more obvious. The aggressive investor, of course, will probably opt to participate. It will be important for such investors; how- ever, to maintain a certain attitude of skepticism. As long as one realizes such a phase can- not continue foreover, it can be one highly productive of profits. Dow-Jones Industrial (1200 p.m.) 904.88 ' S&P (1200 p.m.) 104.10 ANTHONY W. TABELL AWTmn DELAFIELD. HARVEY 0 TABELL No statement or expressIon of opmlon or any other motter herem contOlned Is, or 15 10 be deemed 10 be, directly or Indorectly, on offer or Ihe soliCItation of on offer to buy or sell any seoJflty referred 10 or mentIoned The motter IS presenled merely for Ihe convellentt of the subscrIber WhIle we believe the sources of our information to be rellCble, we In no way represent or guarantee the accuracy thereof nor of the statements mude herein Any aCllon to be taken by the subSCriber should be bosed on hiS OVin investigation and information Janney Montgomery Stet', Inc, as a corporation, and Its offICers or employees, may now have, or may raler take, poSItions or trades In respect 10 any S!!CUfitles mentioned In thiS or any future Issue, and such pOSition may be different from any views now or hereafter expressed In this or any olher Issue Janney Montgomery SCalI, Inc, which IS registered With the SEC a5 an mvestment adVisor, may give adVICe 10 lIs Investment adVisory and other customers mdependently of any statements made In thiS or In any other Issue Further Information on any sectmty mentioned herein IS aVOllable on request