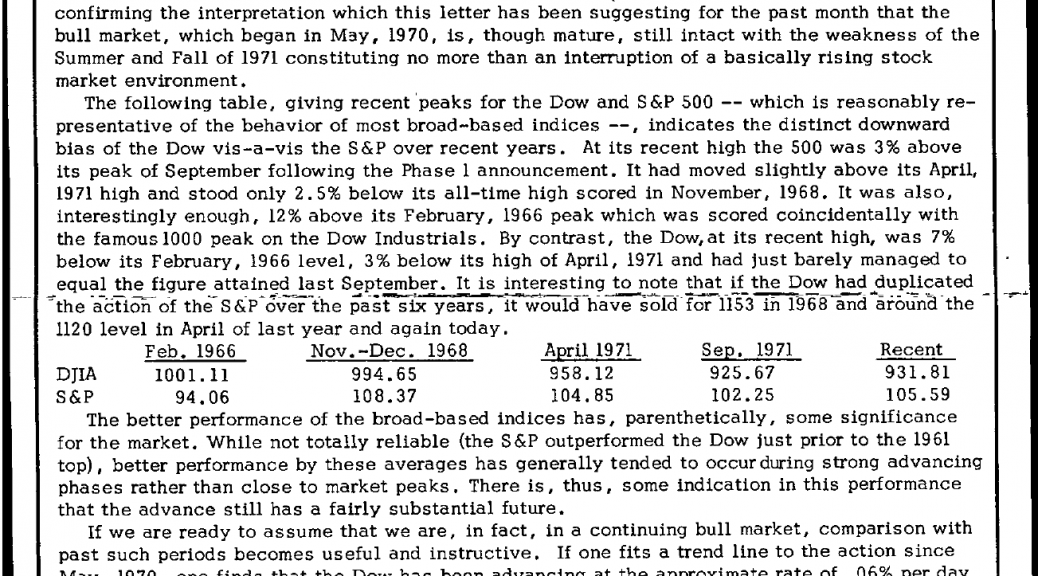 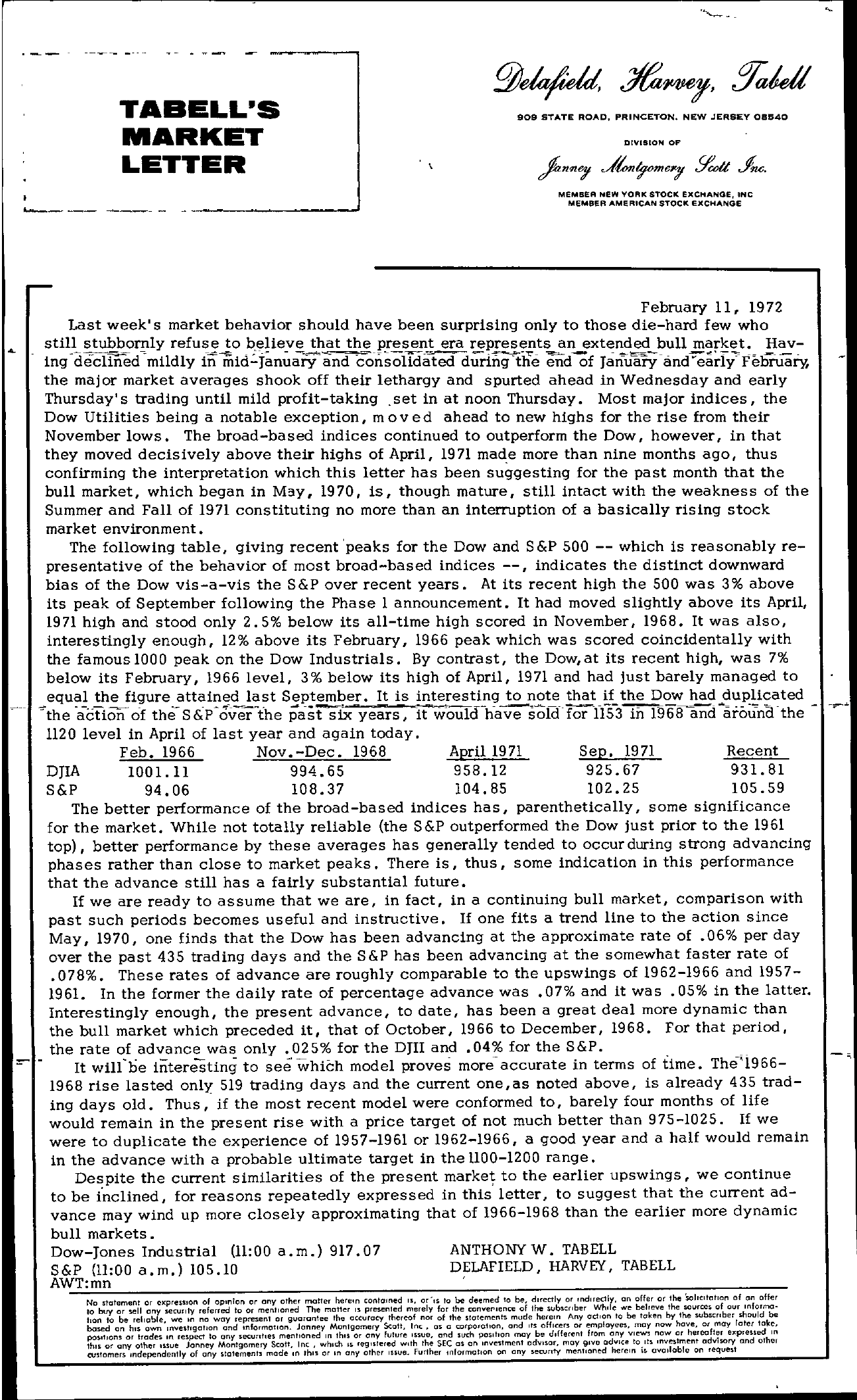 ''–. TABELL'S MARKET LETTER , – – —-'— — …. –J 909 STATE ROAD, PRINCETON. NEW JERSEY 08540 DIVISION OF MEMBER NEW YORK STOCK eXCHANGE, lNC MEMBER AMERICAN STOCK EXCHANGE February 11, 1972 Last week's market behavior should have been surprising only to those die-hard few who stil stubbrnly refus to b.e!iey that the presept era represents an extended bull market. Havingdeclinedmildly inmid'J1muaryand consofidated duringtlle endaf JariuarYand'eayFebruaiy, – the major market averages shook off their lethargy and spurted ahead in Wednesday and early Thursday's trading until mild profit-taking .set in at noon Thursday. Most major indices, the Dow Utilities being a notable exception, m 0 v e d ahead to new highs for the rise from their November lows. The broad-based indices continued to outperform the Dow, however, in that they moved decisively above their highs of April, 1971 made more than nine months ago, thus confirming the interpretation which this letter has been sUJgesting for the past month that the bull market, which began in MlY, 1970, is, though mature, still intact with the weakness of the Summer and Fall of 1971 constituting no more than an interruption of a basically rising stock market environment. The following table, giving recent 'peaks for the Dow and S &P 500 — which is reasonably re- presentative of the behavior of most broad-based indices –, indicates the distinct downward bias of the Dow vis-a-vis the S&P over recent years. At its recent high the 500 was 3 above its peak of September following the Phase 1 announcement. It had moved slightly above its April, 1971 high and stood only 2.5 below its all-time high scored in November, 1968. It was also, interestingly enough, 12 above its February, 1966 peak which was scored coincidentally with the famous 1000 peak on the Dow Industrials. By contrast, the Dow,at its recent high, was 7 below its February, 1966 level, 3 below its high of April, 1971 and had just barely managed to equH!.he figure attail1d last Sp!;.mber. It is inte;esting to nte!hat !.f the D.11ad uic;ated 1.-. the action of the S &P over the past six years, it would have sold for 1153 in 1968 and arOlina the 1120 level in April of last year and again today. Feb. 1966 Nov.-Dec. 1968 April 1971 Sep. 1971 Recent DJIA 1001.11 994.65 958.12 925.67 931. 81 S&P 94.06 108.37 104.85 102.25 105.59 The better performance of the broad-based indices has, parenthetically, some significance for the market. While not totally reliable (the S&P outperformed the Dow just prior to the 1961 top), better performance by these averages has generally tended to occur during strong advancing phases rather than close to market peaks. There is, thus, some indication in this performance that the advance still has a fairly substantial future. If we are ready to assume that we are, in fact, in a continuing bull market, comparison with past such periods becomes useful and instructive. If one fits a trend line to the action since May, 1970, one finds that the Dow has been advancing at the approximate rate of .06 per day over the past 435 trading days and the S&P has been advancing at the somewhat faster rate of .078. These rates of advance are roughly comparable to the upswings of 1962-1966 and 1957- 1961. In the former the daily rate of percentage advance was. 07 and it was. 05 in the latter. Interestingly enough, the present advance, to date, has been a great deal more dynamic than the bull market which preceded it, that of October, 1966 to December, 1968. For that period, the rate of advance was only .025 for the DJll and .04 for the S&P. – It wil(be interesting to see which model proves more-accurate in terms of time. Thei966- 1968 rise lasted only 519 trading days and the current one,as noted above, is already 435 trad- ing days old. Thus, if the most recent model were conformed to, barely four months of life would remain in the present rise with a price target of not much better than 975-1025. If we were to duplicate the experience of 1957-1961 or 1962-1966, a good year and a half would remain in the advance with a probable ultimate target in the 1100-1200 range. Despite the current similarities of the present market to the earlier upswings, we continue to be inclined, for reasons repeatedly expressed in this' letter, to suggest that the current ad- vance may wind up more closely approximating that of 1966-1968 than the earlier more dynamic bull markets. Dow-Jones Industrial (1100 a. m.) 917.07 S&P (llOO a.m.) 105.10 AWTmn ANTHONY W. TAB ELL DELAFIELD, HARVEY, TAB ELL No statement or expression of opinion or any other matter herein contained IS, or'IS 10 be deemed to be, directly or indirectly, an offer or the Solrcltatlon af an affer 10 buy hon to or sell any security be reliable. we In referred no way 1r0eporresmenetntoirongeudaraTnhteeemathtteeratIScuprraesyenttheedremoferneolyr for Ihe canverlente of the subsrlber While we belreve Ihe sources of our Informaof the statements mude herein Any oellon to be taken by the subSCriber should be bas.ed on hiS own inVestigatIOn and information. Janney Montgomery Scott, Inc. as 0 corporallon, and Its officers or employees, may now have. or may later lake. poSitions or trades In respect to any securlhes mentioned In HilS or any future Issue, and slJch pOSlhon may be different from (Iny views now or hereafter elpressed In thIS or (Iny olher U,ue Jonney Montgomery Scott, Inc. which IS registered With the SEC os on Investment adVisor, may give adVice to lIs Investment advisory (Ind othel customers mdependently of any stotements mode In Ibtls or In any other Inue. further Information on any security mentioned herein is aVailable on request