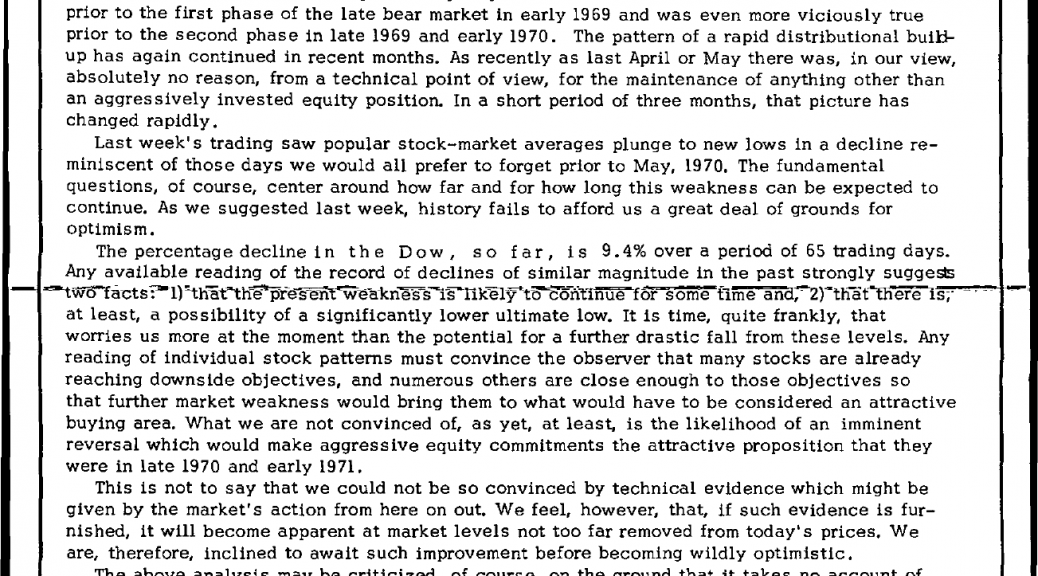 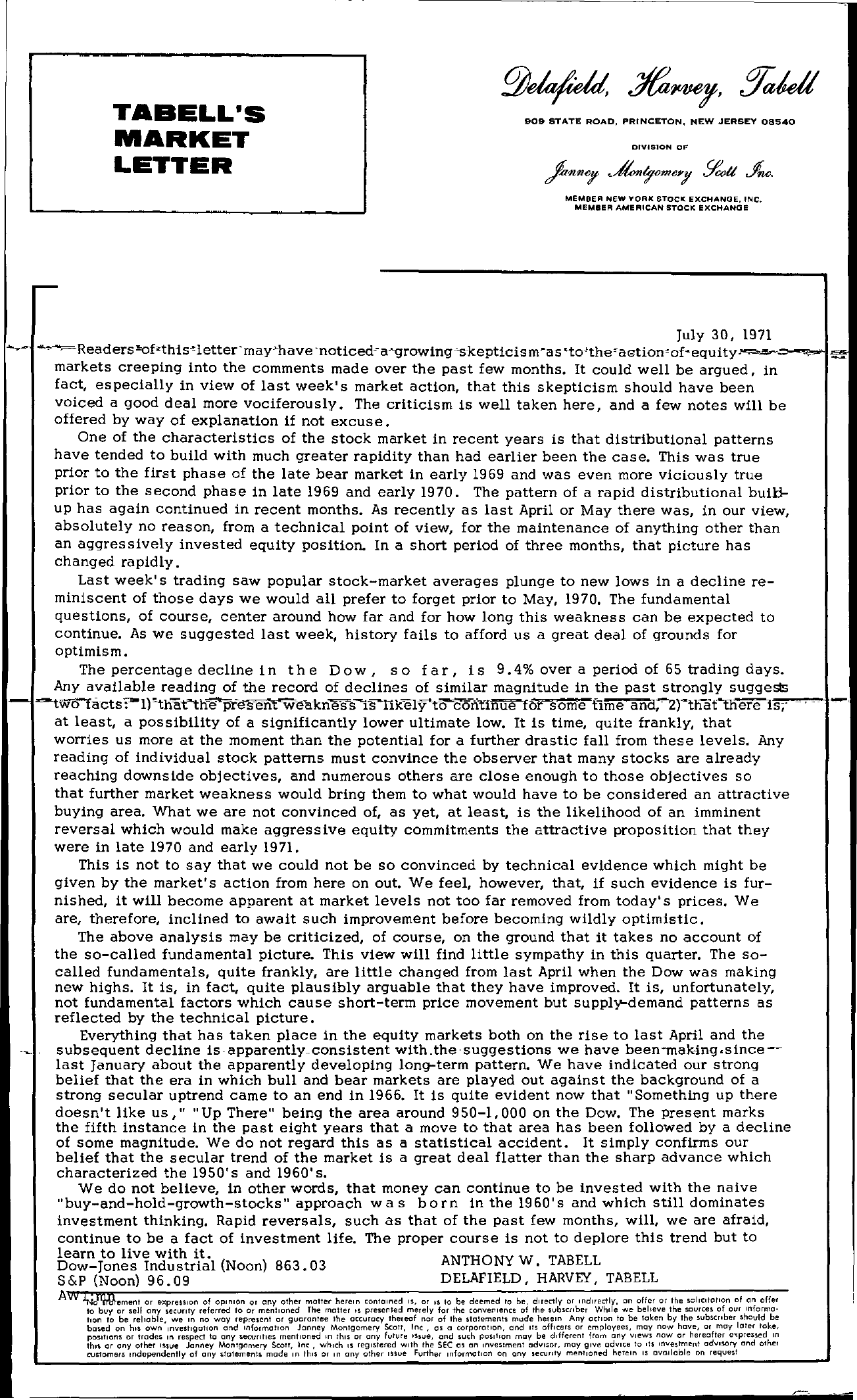 TABELL'S MARKET LETTER 909 STATE ROAD, PRINCETON. NEW JERSEY 08540 DIVISION OF MEMBER New YORK STOCI( EXCHANGE, INC. MEMBER AMERICAN STOCK EXCHANGE July 30, 1971 ReadersofthtslettermayhavenoticedagrowingSkepticism'asto'the'aGtionofequity,'''''.–I markets creeping into the comments made over the past few months. It could well be argued, in fact, especially in view of last week's market action, that this skepticism should have been voiced a good deal more vociferously. The criticism is well taken here, and a few notes will be offered by way of explanation if not excuse. One of the characteristics of the stock market in recent years is that distributional patterns have tended to build with much greater rapidity than had earlier been the case. This was true prior to the first phase of the late bear market in early 1969 and was even more viciously true prior to the second phase in late 1969 and early 1970. The pattern of a rapid distributional buitl- up has again continued in recent months. As recently as last April or May there was, in our view, absolutely no reason, from a technical point of view, for the maintenance of anything other than an aggressively invested equity position. In a short period of three months, that picture has changed rapidly. Last week's trading saw popular stock-market averages plunge to new lows in a decline re- miniscent of those days we would all prefer to forget prior to May, 1970. The fundamental questions, of course, center around how far and for how long this weakness can be expected to continue. As we suggested last week, history fails to afford us a great deal of grounds for optimism. The percentage decline in the Dow, so far, is 9.4 over a period of 65 trading days. Any available reading of the record of declines of Similar magnitude in the past strongly suggests – -tWO-fa-ctsl)th-at'tliepres-entErakness-i'sl1KelYtb-cott'tinue for some time and;2)-tfiatt1iere i';s..,;…..-t-' at least, a possibility of a significantly lower ultimate low. It is time, quite frankly, that worries us more at the moment than the potential for a further drastic fall from these levels. Any reading of individual stock patterns must convince the observer that many stocks are already reaching downside objectives, and numerous others are close enough to those objectives so that further market weakness would bring them to what would have to be considered an attractive buying area. What we are not convinced of, as yet, at least, is the likelihood of an imminent reversal which would make aggressive equity commitments the attractive proposition that they were in late 1970 and early 1971. This is not to say that we could not be so convinced by technical evidence which might be given by the market's action from here on out. We feel, however, that, if such eVidence is fur- nished, it will become apparent at market levels not too far removed from today's prices. We are, therefore, inclined to await such improvement before becoming wildly optimistic. The above analysis may be criticized, of course, on the ground that it takes no account of the so-called fundamental picture. This view will find little sympathy in this quarter. The so- called fundamentals, quite frankly, are little changed from last April when the Dow was making new highs. It is, in fact, quite plausibly arguable that they have improved. It is, unfortunately, not fundamental factors which cause short-term price movement but supply-demand patterns as reflected by the technical picture. Everything that has taken place in the equity markets both on the rise to last April and the subsequent decline is apparently.consistent with.the'suggestions we have been-making.since– last January about the apparently developing long-term pattern. We have indicated our strong belief that the era in which bull and bear markets are played out against the background of a strong secular uptrend came to an end in 1966. It is quite evident now that Something up there doesn't like us, Up There being the area around 950-1,000 on the Dow. The present marks the fifth instance in the past eight years that a move to that area has been followed by a decline of some magnitude. We do not regard this as a statistical accident. It simply confirms our belief that the secular trend of the market is a great deal flatter than the sharp advance which characterized the 1950' sand 1960' s. We do not believe, in other words, that money can continue to be invested with the naive buy-and-hold-growth-stocks approach was born in the 1960' s and which still dominates investment thinking. Rapid reversals, such as that of the past few months, will, we are afraid, continue to be a fact of investment life. The proper course is not to deplore this trend but to learn to live with it. Dow-Jones Industrial (Noon) 863.03 ANTHONY W. TABELL S&P (Noon) 96.09 DELAFIELD, HARVEY, TABELL Avv J.blemen' or expreslon of opinion or any oiher matter herein contolned IS, or 1 to be deemed 10 be, directly or ,ndlrectly, on offer or the soircltatlon of an offer to buy or sell any security referred to Or mentioned The motter 1 presented merely for the convenience of the subSCriber While we believe the ource of our Informahon to be reliable, we In no woy represent or guoranlee the occurocy thereof nor of the stalements mude herein Any ocllon to be token by the subSCriber should be bosed on hiS own InVestlgotlon and Informalron Janney Montgomery Scali, Inc, as a corporotlon, and Its officers or employees, may now have, or may later toke, positions or trades In respect to any securities mentioned In thiS or any future ISsue, and such poslhon may be ddferent Iram any views now or hereafter epressed In thiS or any other lSue Janney Montgomery Scott, Inc, which IS registered With the SEC as on InveStment odvlsor, moy give adVice 10 Its Investment adv,Ory and other customers Independently of any stotements made In thiS or In any other Issue Further information on any security mentioned herein IS ovailable on request