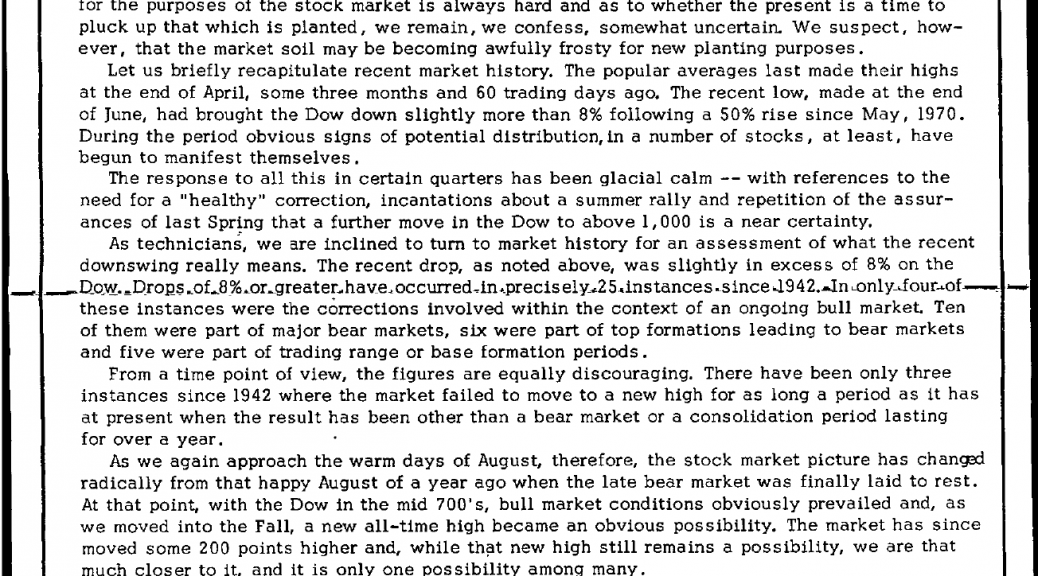 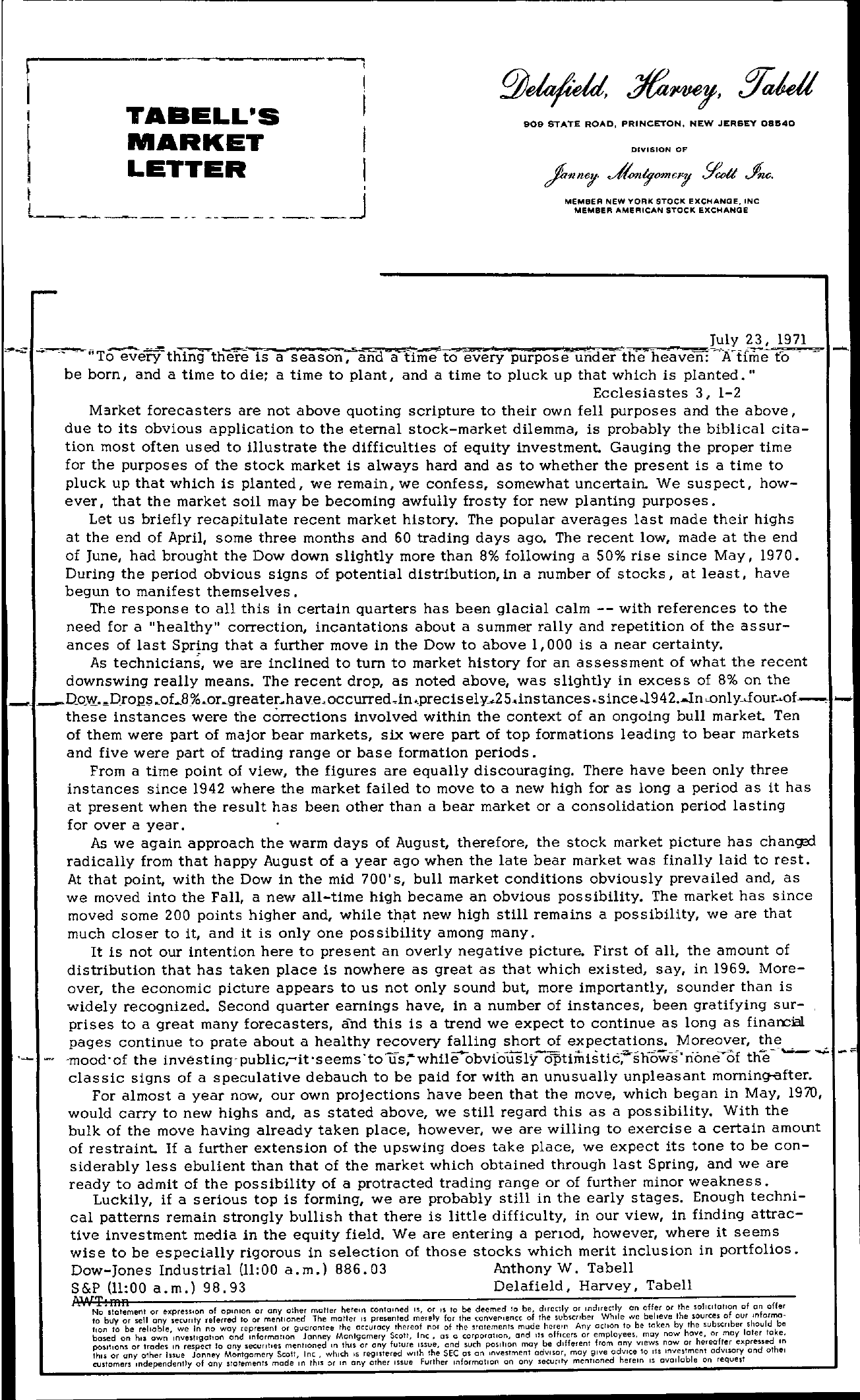 ——————————————————————————————————– I I TABELL'S I MARKET I I I I LETTER JI, 909 STATE ROAD, PRINCETON, NEW JERSEY 081540 DIVISION OF MEMBER NEW YORK STOCK EXCHANQE, INC MEMBER AMEFUCAN STOCK EXCHANGe July 23, 1971 fi Toe;ery thing' thereis-a-se-as-.;nan'd'&at'im;-toeve.r.y-purp-os..,e…u.n'd'e-r-'t'h'-'e.,hc-'eav-e.n.' znfme to – – be born, and a time to die; a time to plant, and a time to pluck up that which is planted. Ecclesiastes 3, 1-2 M3rket forecasters are not above quoting scripture to their own fell purposes and the above, due to its obvious application to the eternal stock-market dilemma, is probably the biblical citation most often us ed to illustrate the difficulties of equity investment. Gauging the proper time for the purposes of the stock market is always hard and as to whether the present is a time to pluck up that which is planted, we remain, we confess, somewhat uncertain. We suspect, however, that the market soil may be becoming awfully frosty for new planting purposes. Let us briefly recapitulate recent market history. The popular averages last made their highs at the end of April, some three months and 60 trading days ago. The recent low, made at the end of June, had brought the Dow down slightly more than 8 following a 50 rise since May, 1970. During the period obvious signs of potential distribution, in a number of stocks, at least, have begun to manifest themselves. The response to all this in certain quarters has been glacial calm — with references to the need for a healthy correction, incantations about a summer rally and repetition of the assurances of last Spring that a further move in the Dow to above 1,000 is a near certainty. As technicians, we are inclined to turn to market history for an assessment of what the recent downswing really means. The recent drop, as noted above, was slightly in excess of 8 on the I2oJ.DroRs.oL8or-greater-haveoccurred.in.precisely25.instances.since.J.942.1nconly-cfourof- these instances were the corrections involved within the context of an ongoing bull market. Ten of them were part of major bear markets, six were part of top formations leading to bear markets and five were part of trading range or base formation periods. From a time point of view, the figures are equally discouraging. There have been only three instances since 1942 where the market failed to move to a new high for as long a period as it has at present when the result has been other than a bear market or a consolidation period lasting for over a year. As we again approach the warm days of August, therefore, the stock market picture has changorl radically from that happy August of a year ago when the late bear market was finally laid to rest. At that pOint, with the Dow in the mid 700' s, bull market conditions obviously prevailed and, as we moved into the Fall, a newall-time high became an obvious possibility. The market has since moved some 200 points higher and, while tht new high still remains a possibility, we are that much closer to it, and it is only one possibility among many. It is not our intention here to present an overly negative picture. First of all, the amount of distribution that has taken place is nowhere as great as that which existed, say, in 1969. Moreover, the economic picture appears to us not only sound but, more importantly, sounder than is widely recognized. Second quarter earnings have, in a number of instances, been gratifying surprises to a great many forecasters, a-nd this is a trend we expect to continue as long as financial pages continue to prate about a healthy recovery falling short of expectations. Moreover, the ' – -mood'of the investing-public,-it'seems'to us,&whileobvfously optimisticsnow-s'rioneof the—–. …. classic signs of a speculative debauch to be paid for with an unusually unpleasant morning-after. For almost a year now, our own projections have been that the move, which began in May, 1970, would carry to new highs and, as stated above, we still regard this as a possibility. With the bulk of the move having already taken place, however, we are willing to exercise a certain amotnt of restraint. If a further extension of the upswing does take place, we expect its tone to be con- siderably less ebulient than that of the market which obtained through last Spring, and we are ready to admit of the possibility of a protracted trading range or of further minor weakness. Luckily, if a serious top is forming, we are probably still in the early stages. Enough techni- cal patterns remain strongly bullish that there is little difficulty, in our view, in finding attrac- tive investment media in the equity field. We are entering a penod, however, where it seems wise to be especially rigorous in selection of those stocks which merit inclusion in portfolios. Dow-Jones Industrial (1100 a.m.) 886.03 Anthony W. Tabell S&P (1100 a.m.) 98,93 Delafield, Harvey, Tabell 1'1WTmflNo statement or epress,on to buy or sell any secI,HIty tton to be reliable, we In of op.nlon or ony olner motter hereIn contolned IS, or referred no way 1r0eporer menetntoirongeudaraTnhteeemathtteeracIScuprraecsyenttheedremoferneolyr IS to be for the cdoenevmefe'dlentoc be. of dHCdly or Indlredly the subscrrber While on He offer or believe of Ihe statements mude herein Any action to be token the soliCitation of on offer the sources of our mformaby the subscriber should be bosed on hiS own investigation and information Janney Montgomery Scott, Inc, as 0 corporolton, ond Its officers or employees, may now have, or may later toke, POIIIOn5 or trades In respect to any securities mentioned In thiS or any future Issue, ond such pOSition moy be different from any views now or hereafter expressed In thiS or any other Issue Janney Montgomery Scol', Inc, which IS registered wllh Ihe SEC as on ,nvestment adVisor, may give adVICe to IlS Investment adVISOry and othel customers mdependently of any statements mode m thiS or In any other Issue Further Information on any security mentioned herein IS available on request