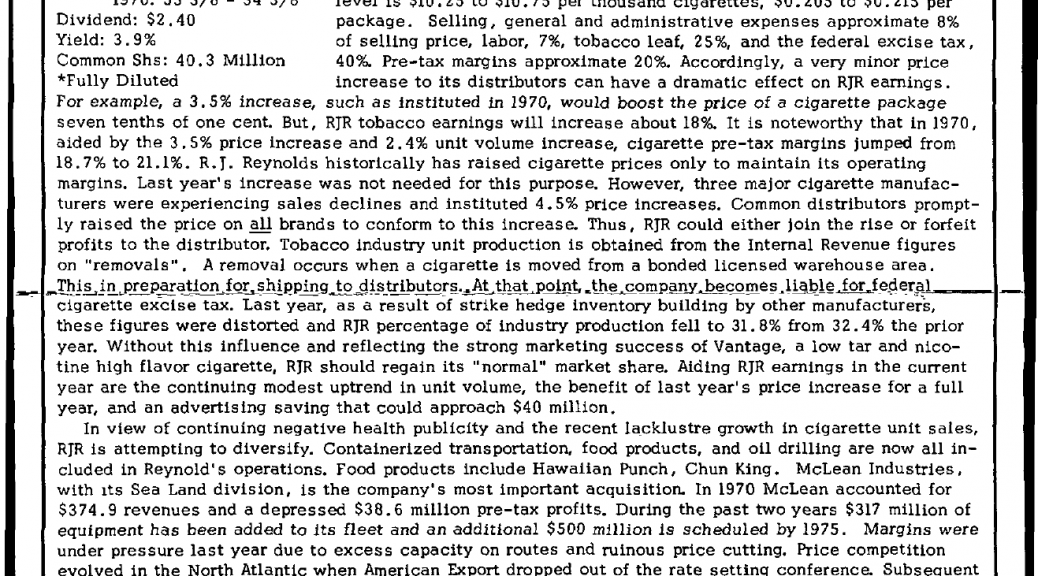 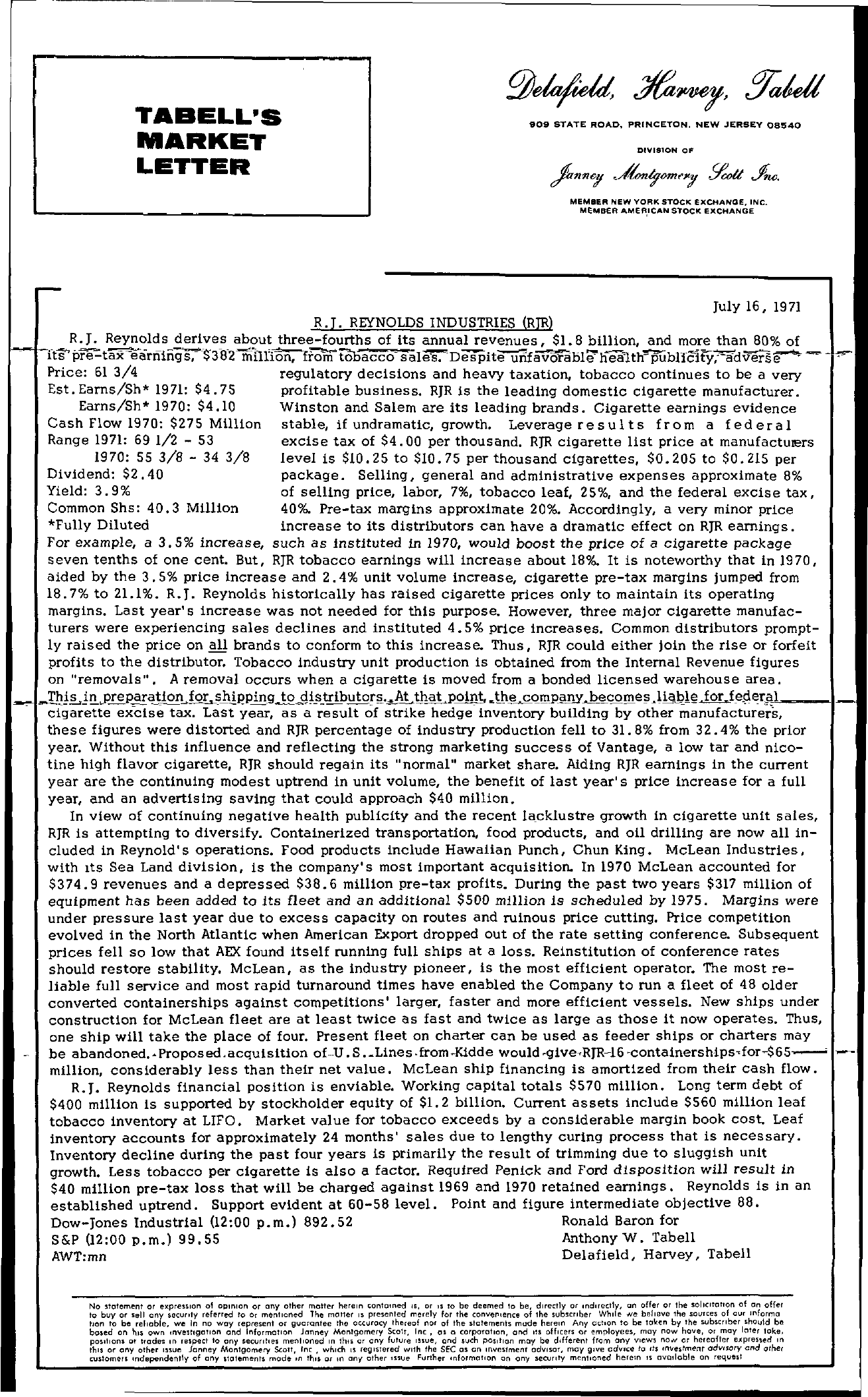 TABELL'S MARKET LETTER 909 STATE ROAD, PRINCETON, NEW JERSEY 08540 DIVISION OF MEMBER NEW YORK STOCK eXCHANGE. INC. MEMBER AMER,ICAN STOCK EXCHANGE R. r. REYNOLDS INDUSTRIES (RJRl July 16, 1971 R. J. Reynolds derives about three-fourths of its annual revenues, 1. 8 billion, and more than 80 of 14-ltn''sprtax-earniiigs,''382nlhnon, ffOnitooacco' sale's. 'Despite unavoralil9'hea'1thpubncHy;-adv-ere– – 1.,- Price 61 3/4 regulatory decisions and heavy taxation, tobacco continues to be a very Est. Earns/Sh 1971 4.75 profitable business. RJR is the leading domestic cigarette manufacturer. Earns/Sh 1970 4.10 Winston and Salem are its leading brands. Cigarette earnings evidence Cash Flow 1970 275 Million stable, if undramatic, growth. Leverage results from a federal Range 1971 69 1/2 – 53 excise tax of 4.00 per thousand. RJR cigarette list price at manufacturers 1970 55 3/8 – 34 3/8 level is 10.25 to 10.75 per thousand cigarettes, 0.205 to 0.215 per Dividend 2.40 package. Selling, general and administrative expenses approximate 8 Yield 3.9 of selling price, labor, 7, tobacco leaf, 25, and the federal excise tax, Common Shs 40.3 Million 40. Pre-tax margins approximate 20. Accordingly, a very minor price Fully Diluted increase to its distributors can have a dramatic effect on RJR earnings. For example, a 3.5 increase, such as instituted in 1970, would boost the price of a cigarette package seven tenths of one cent. But, RJR tobacco earnings will increase about 18. It is noteworthy that in 1970, aided by the 3.5 price increase and 2.4 unit volume increase, cigarette pre-tax margins jumped from 18.7 to 21.1. R.J. Reynolds historically has raised Cigarette prices only to maintain its operating margins. Last year's increase was not needed for this purpose. However, three major Cigarette manufac- turers were experiencing sales declines and instituted 4.5 price increases. Common distributors prompt- ly raised the price on all brands to conform to this increase. Thus, RJR could either join the rise or forfeit profits to the distributor. Tobacco industry unit production is obtained from the Internal Revenue figures on removals. A removal occurs when a cigarette is moved from a bonded licensed warehouse area. Thi s ,j!!..pre paration,fQ!..s.h!pping.J.Q,jts.tributor..Atthat !loin,!,.th….QQI)l.ll-I1Y. bec.Q!!1e,liqble ,..fur.,fe.cl era) Cigarette ecise tax. Last year, as a result of strike hedge inventory building by other m' '0' these figures were distorted and RJR percentage of industry production fell to 31. 8 from 32.4 the prior year. Without this influence and reflecting the strong marketing success of Vantage, a low tar and nico- tine high flavor cigarette, RJR should regain its normal market share. Aiding RJR earnings in the current year are the continuing modest uptrend in unit volume, the benefit of last year's price increase for a full year, and an advertising saving that could approach 40 million. In view of continuing negative health publicity and the recent la,cklustre growth in cigarette unit sales, RJR is attempting to diversify. Containerized transportation, food products, and oil drilling are now all in- cluded in Reynold's operations. Food products include Hawaiian Punch, Chun King. McLean Industries, with ltS Sea Land division, is the company's most important acquisition. In 1970 McLean accounted for 374.9 revenues and a depressed 38.6 million pre-tax profits. During the past two years 317 million of equipment has been added to its fleet and an additional 500 million is scheduled by 1975. Margins were under pressure last year due to excess capacity On routes and ruinous price cutting. Price competition evolved in the North Atlantic when American Export dropped out of the rate setting conference. Subsequent prices fell so low that AEX found itself running full ships at a loss. Reinstitution of conference rates should restore stability. McLean, as the industry pioneer, is the most efficient operator. The most re- liable full service and most rapid turnaround times have enabled the Company to run a fleet of 48 older converted containerships against competitions' larger, faster and more efficient vessels. New ships under construction for McLean fleet are at least twice as fast and twice as large as those it now operates. Thus, one ship will take the place of four. Present fleet on charter can be used as feeder ships or charters may be abandoned. Proposed.acquisition of-U.S .Lines ,from-Kidde would .give,RJR-16 containerships,for-65—- million, considerably less than their net value. McLean ship financing is amortized from their cash flow. R. J. Reynolds financial position is enviable. Working capital totals 570 million. Long term debt of 400 million is supported by stockholder equity of 1.2 billion. Current assets include 560 million leaf tobacco inventory at LIFO. Market value for tobacco exceeds by a considerable margin book cost. Leaf inventory accounts for approximately 24 months' sales due to lengthy curing process that is necessary. Inventory decline during the past four years is primarily the result of trimming due to sluggish unit growth. Less tobacco per cigarette is also a factor. Required Penick and Ford disposition will result in 40 million pre-tax loss that will be charged against 1969 and 1970 retained earnings. Reynolds is in an established uptrend. Support eVident at 60-58 level. Point and figure intermediate objective 88. Dow-Jones Industrial (1200 p.m.) 892.52 Ronald Baron for S&P (1200 p.m.) 99.55 AnthonyW. Tabell AWT mn Delafield, Harvey, Tabell No statement or expression of OPinion or any other matter herein contolne! IS, or 15 to be deemed to be, directly or indirectly, on offer or the sOllcltolion of on offer to buy or se1l any security referred to Or mentioned The moiler IS presented merely for the conVef'lence of the subscriber While e believe the sources of our Informo tlon to be reliable, we In no way represent or guarantee the accuracy thereof nor of the statements mode herein Any achon to be loken by the subSCriber should be based on tlls own Invesllgollon and Information Janney Montgomery Scott, Inc, as a corporohon, and Its officers Qr employees, may now have, or may loter toke. pOSitions at trades In respect to any Secuntles mentioned In thiS or ony future Inue, ond such pOSition moy be different from any views nON or hereafter e.opreS\ed In thiS or any other InUIl Jonney Montgomery Scott, Inc, which IS registered With the SEC as on Investment adVisor, may g.ve advlce to lIs mvetment odvlory and other customen Independently of any stolements mode ,n It-us or m any other Issue Fvrlher ,formation on any security mentIOned herem IS available on request