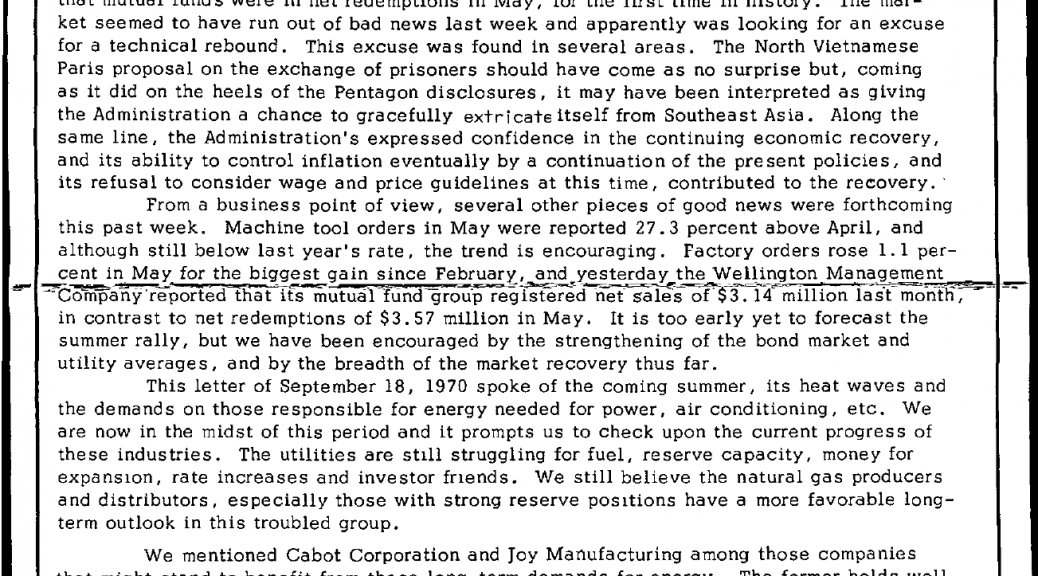 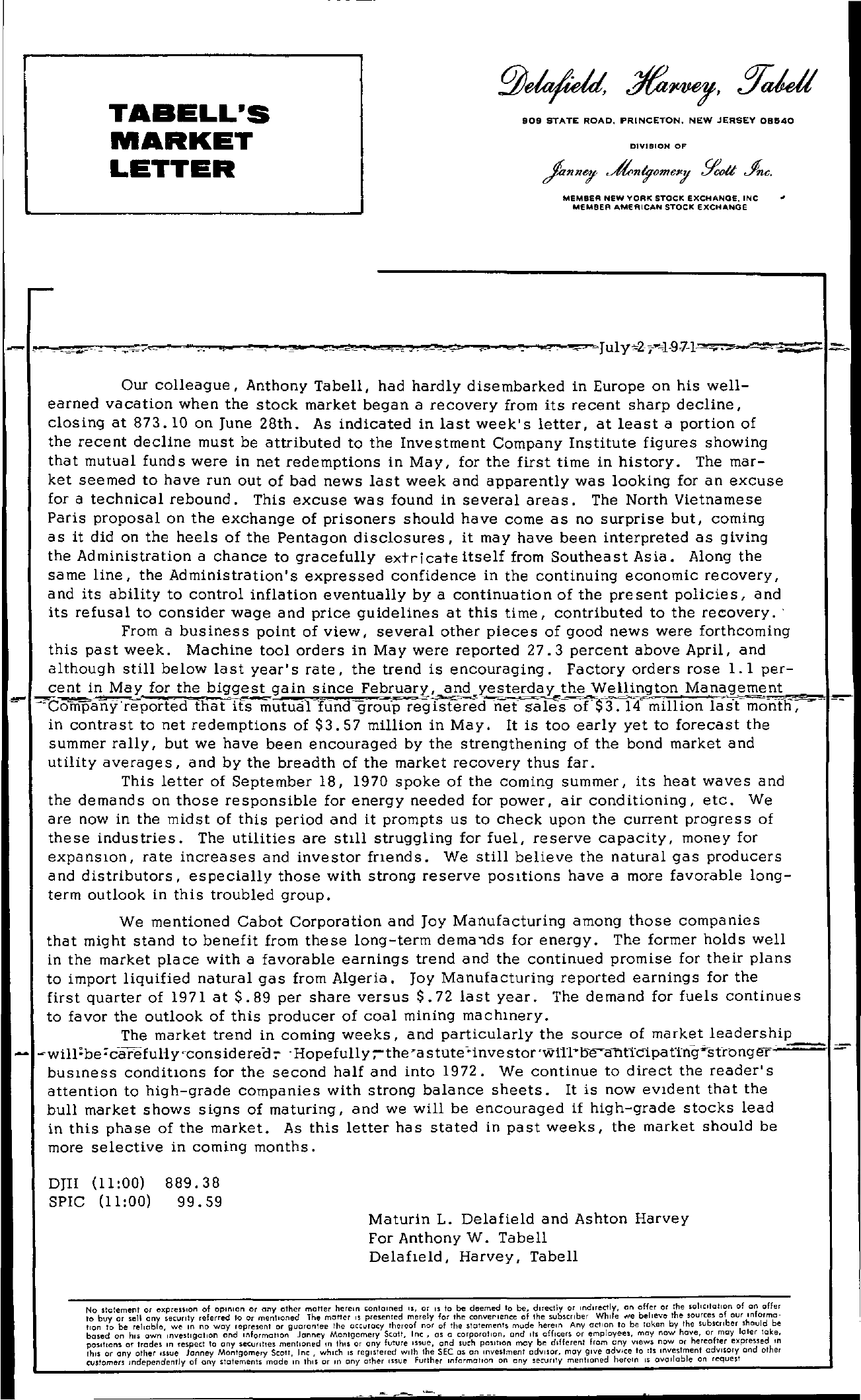 TABELL-S MARKET LETTER 909 STATE ROAD, PRINCETON, NEW JERSEY 08640 DIVISION OF' MEMBER NEW VOAI( STOCK eXCHANGE, INC MEM8ER AMERICAN STOCK EXCHA.NGE Our colleague, Anthony Tabell, had hardly disembarked in Europe on his wellearned vacation when the stock market began a recovery from its recent sharp decline, closing at 873.10 on June 28th. As indicated in last week's letter, at least a portion of the recent decline must be attributed to the Investment Company Institute figures showing that mutual fund s were in net redemptions in May, for the first time in history. The market seemed to have run out of bad news last week and apparently was looking for an excuse for a technical rebound. This excuse was found in several areas. The North Vietnamese Paris proposal on the exchange of prisoners should have come as no surprise but, coming as it did on the heels of the Pentagon disclosures, it may have been interpreted as giving the Administration a chance to gracefully extricate itself from Southeast Asia. Along the same line, the Administration's expressed confidence in the continuing economic recovery, and its ability to control inflation eventually by a continuation of the pre sent policies, and its refusal to consider wage and price guidelines at this time, contributed to the recovery. ' From a business point of view, several other pieces of good news were forthcoming this past week. Machine tool orders in May were reported 27.3 percent above April, and although still below last year's rate, the trend is encouraging. Factory orders rose 1.1 per ,..,..n Max for th!, bigg,est gain since Februar,,..ad,ye.rdathe .'–elll!tjlton Manage;;.n;.;t'lI' -Company'reported that its mutual fund grou-p registered net sales of 3.14 million last month, in contrast to net redemptions of 3.57 million in May. It is too early yet to forecast the summer rally, but we have been encouraged by the strengthening of the bond market and utility averages, and by the breadth of the market recovery thus far. This letter of September 18, 1970 spoke of the coming summer, its heat waves and the demands on those responsible for energy needed for power, air conditioning, etc. We are now in the midst of this period and it prompts us to check upon the current progress of these industries. The utilities are still struggling for fuel, reserve capacity, money for expanslOn, rate increases and investor fnends. We still believe the natural gas producers and distributors, especially those with strong reserve positions have a more favorable longterm outlook in this troubled group. We mentioned Cabot Corporation and JOY Manufacturing among those companies that might stand to benefit from these long-term dema,ds for energy. The former holds well in the market place with a favorable earnings trend and the continued promise for their plans to import liquified natural gas from Algeria. Joy Manufacturing reported earnings for the first quarter of 1971 at .89 per share versus .72 last year. The demand for fuels continues to favor the outlook of this producer of coal mining machmery. The market trend in coming weeks, and particularly the source of market leadership – -willbe carefuHy cconsiderea; -Hopefully ;-the a stute-'inve stor'WiU'b-e–a1'lricipa tfngstronger – – busmess conditlOns for the second half and into 1972. We continue to direct the reader's attention to high-grade companies with strong balance sheets. It is now eVident that the bull market shows signs of maturing, and we will be encouraged if high-grade stocks lead in this phase of the market. As this letter has stated in past weeks, the market should be more selective in coming months. DJII (11 00) 889.38 SPIC (1100) 99.59 Maturin 1. Delafield and Ashton Harvey For Anthony W. Tabell Delaheld, Harvey, Tabell No stotement or expreulon of opinion or any other matter herem contolned IS, or IS to be deemed 10 be, directly or indirectly, on offer or Ihe soil ClIo lion of on offer to buy Of sell ony security referred 10 or mentioned The motler 15 presented merely for the converlencos of the subscriber While Ne believe the sources of our .nformatlon to be relloble, we In no woy represent or guarantee the otturoty Thereof nor of the stotemenTs m(lde herein Any acllon to be token by the substrlber should be bosed on his own Irwesllgatlon and Information Janney Montgomery Scott, Int , 05 0 corparollon, ond It5 officers or employees, moy flOW hove, or moy loler loke, posllions or trade!. In respect 10 any secufilies menlloned In thiS or any future Issue, ond such position moy be different from any views now or hereafter expressed In thiS or any other Issue Janney Montgomery Scoll, Inc, which IS registered wllh the SEC as on Investment adVisor, may give adVice 10 lIs IfIvestment adVisory and other customers Independently of ony stolements mode In Ihls or In ony other Issue Further Information on any serurlly mentioned herein IS ovallable on request — ,–'-