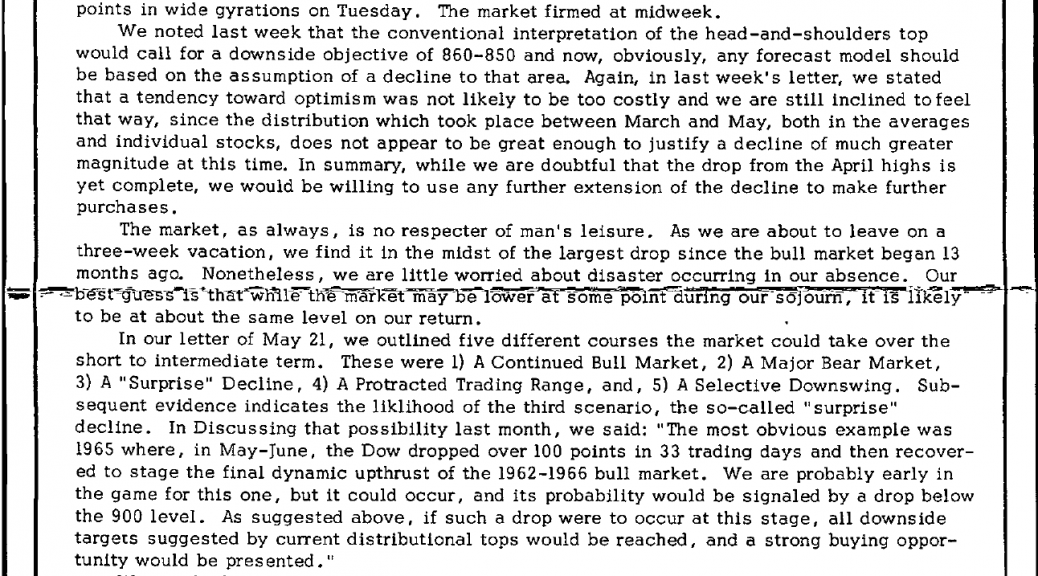 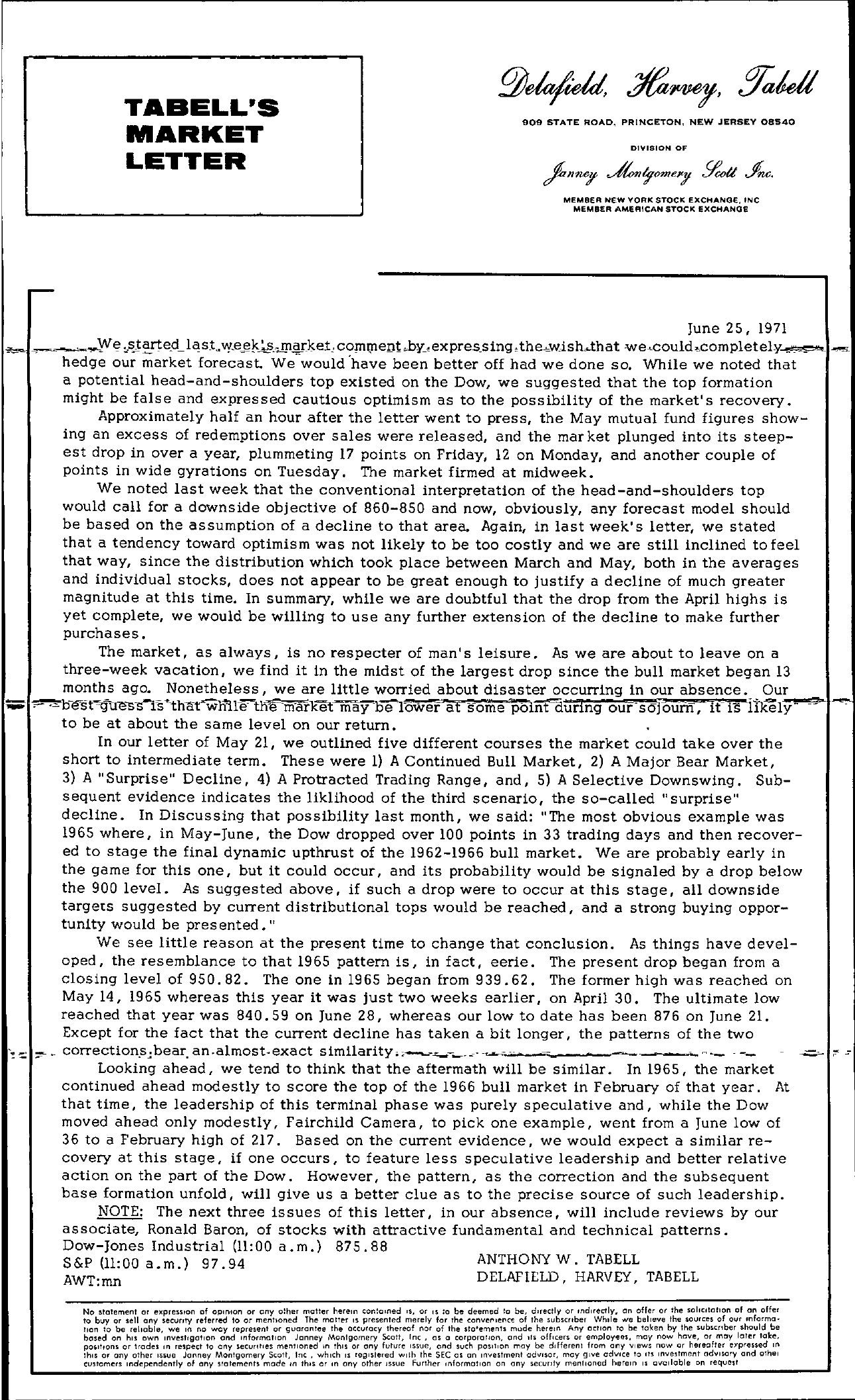 TABELL'S MARKET LETTER 909 STATE ROAD, PRINCETON, NEW JERSEY 08540 DIVISION OF MEMBER NEW YORK STOCK EXCHANGE, INC MEMBER AMERICAN STOCK eXCHANGe June 25, 1971 .y.re cSJrtedlast.ee!.s,ClIket, coml)1eDt b,,-, expres,sing,the-Owishthat we,could ,completelyc,…., hedge our market forecast. We would 'have been better off had we done so. While we noted that a potential head-and-shoulders top existed on the Dow, we suggested that the top formation might be false and expressed cautious optimism as to the possibility of the market's recovery. Approximately half an hour after the letter went to press, the May mutual fund figures show- ing an excess of redemptions over sales were released, and the mar ket plunged into its steep- est drop in over a year, plummeting 17 pOints on Friday, 12 on Monday, and another couple of points in wide gyrations on Tuesday. The market firmed at midweek. We noted last week that the conventional interpretation of the head-and-shoulders top would call for a downside objective of 860-850 and now, obviously, any forecast model should be based on the assumption of a decline to that area. Again, in last week's letter, we stated that a tendency toward optimism was not likely to be too costly and we are still inclined to feel that way, since the distribution which took place between March and May, both in the averages and individual stocks, does not appear to be great enough to justify a decline of much greater magnitude at this time. In summary, while we are doubtful that the drop from the April highs is yet complete, we would be willing to use any further extension of the decline to make further purchases. The market, as always, is no respecter of man's leisure. As we are about to leave on a three-week vacation, we find it in the midst of the largest drop since the bull market began 13 months ago. Nonetheless, we are little worried about disaster occurring in our absence. Our ;;; 'b-e'stlr,s-S-isth1'frwl1l.lFtl'Mm'arket mayoelower at some PbintUr1ng oursoloutn, it is iik'el-!y''- to be at about the same level on our return. In our letter of May 21, we outlined five different courses the market could take over the short to intermediate term. These were 1) A Continued Bull Market, 2) A Major Bear Market, 3) A Surprise Decline, 4) A Protracted Trading Range, and,S) A Selective Downswing. Sub- sequent evidence indicates the liklihood of the third scenario, the so-called surprise decline. In Discussing that possibility last month, we said The most obViOUS example was 1965 where, in MaY-June, the Dow dropped over 100 points in 33 trading days and then recover- ed to stage the final dynamic upthrust of the 1962-1966 bull market. We are probably early in the game for this one, but it could occur, and its probability would be signaled by a drop below the 900 level. As suggested above, if such a drop were to occur at this stage, all downside targets suggested by current distributional tops would be reached, and a strong buying oppor- tunity would be pres ented. We see little reason at the present time to change that conclusion. As things have devel- oped, the resemblance to that 1965 pattern is, in fact, eerie. The present drop began from a clOSing level of 950.82. The one in 1965 began from 939.62. The former high was reached on May 14, 1965 whereas this year it was just two weeks earlier, on April 30. The ultimate low reached that year was 840.59 on June 28, whereas our low to date has been 876 on June 21. Except for the fact that the current decline has taken a bit longer, the patterns of the two .. …, correction,s,bear.an,almost.exact similarity,,.-,,–,,-. – '- — Looking ahead, we tend to think that the aftermath will be similar. In 1965, the market continued ahead modestly to score the top of the 1966 bull market in February of that year. At that time, the leadership of this terminal phase was purely speculative and, while the Dow moved ahead only modestly, Fairchild Camera, to pick one example, went from a June low of 36 to a February high of 217. Based on the current evidence, we would expect a similar re- covery at this stage, if one occurs, to feature less speculative leadership and better relative action on the part of the Dow. However, the pattern, as the correction and the subsequent base formation unfold, will give us a better clue as to the precise source of such leadership. NOTE The next three issues of this letter, in our absence, will include reviews by our aSSOCiate, Ronald Baron, of stocks with attractive fundamental and technical patterns. Dow-Jones Industrial (1100 a.m.) 875.88 SSP (1100 a.m.) 97.94 AWTmn ANTHONY W. TABELL DELAFIELD, HARVEY, TAB ELL No statement or expreSton of opinion or any other molter herein contolned IS, or IS 0 be deemed to be, dIrectly or tndlre!;lly. an offer or the SOllCllotlon of on offer to buy or sell any security referred to or menhoned The motler IS presented merely for Ihe Convellena; of the subscriber While Ne believe the sources of our mformo- lion to be reliable, we In no way represent or guarantee the accuracy thereof nor of the sto'emenls mude herein Any aellon to be token by the subscnber should be based on hiS own mvesllgatlon and Informallon Janney Montgomery Scott, Inc, 0 a corporal lon, and ,Is officers or employees, may now have, or may laler loke, pOlttons or trades In re1pect 10 any seCUrities mentioned In thiS or any futvre Issue, ond such pOSition may be d,fferent from any views now or hereafter e)'pressed III thiS or any other Issue Janney Montgomery Scott, Illc , which 1 registered With the SEC as an mvestment adVisor, moy give ad\/lce 10 lIs Inveslmel'll adVisory and Olhel customers mdependently of any STatements mode 10 Ih,s or 10 any other Issue Further mformatlon on any secunty mentIOned herein IS available on requet