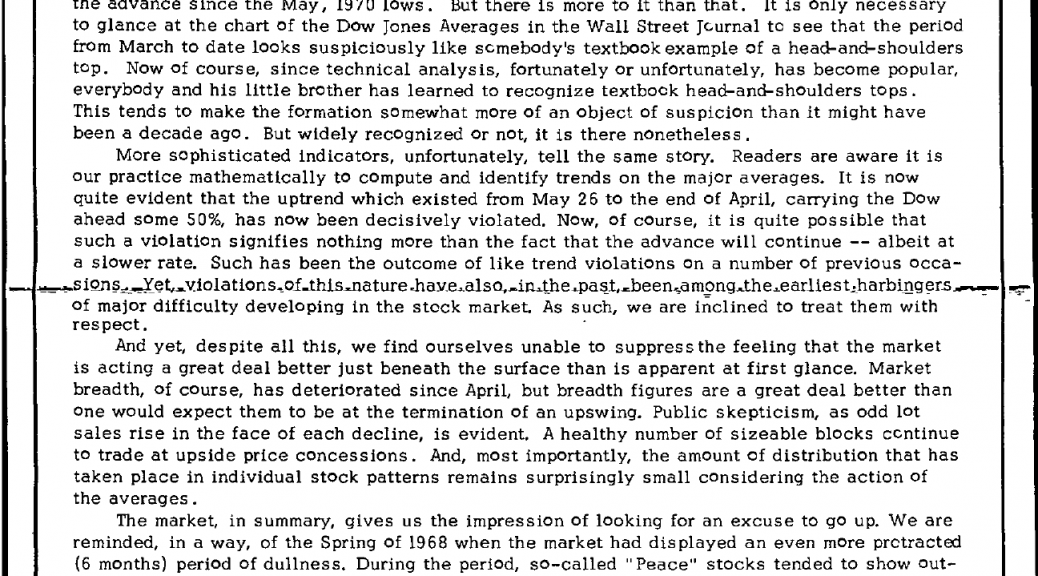 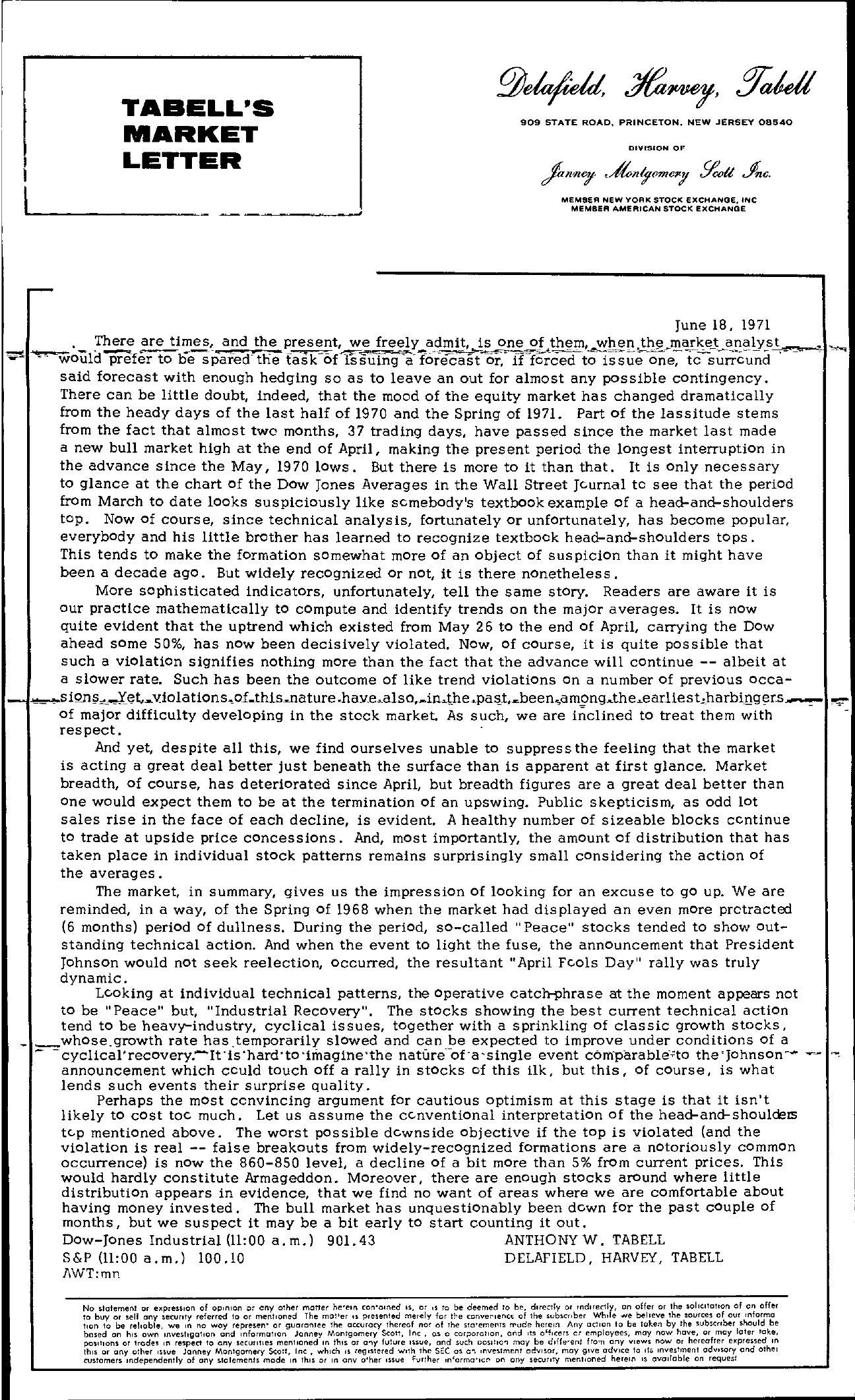 TABELL'S MARKET LETTER I I 909 STATE ROAD, PRINCETON. NEW JERSEY 08540 DIVISION OF MEM8ER NEW YORK STOCK EXCHANGE, INC MEMBER AMERICAN STOCK EXCHANGE June 18, 1971 . There are times, and the present, we freely admit, is one of thE)m, when.themaret analyst ''' ould prefer to tie spared the task-offssuing'aforecasto2' t'fC;ced tssue one-;- tc-s;;-rrc'und ' said forecast with enough hedging so as to leave an out for almost any possible contingency. There can be little doubt, indeed, that the mood of the equity market has changed dramatically from the heady days of the last half of 1970 and the Spring of 1971. Part of the lassitude stems from the fact that almost two months, 37 trading days, have passed since the market last made a new bull market high at the end of April, making the present period the longest interruption in the advance since the May, 1970 lows. But there is more to it than that. It is only necessary to glance at the chart of the Dow Jones Averages in the Wall Street Journal to see that the period from March to date looks suspiciously like somebody's textbook example of a head-and-shoulders top. Now of course, since technical analysis, fortunately or unfortunately, has become popular, everybody and his little brother has learned to recognize textbock head-and-shoulders tops. This tend s to make the formation somewhat more of an object of sus picion than it might have been a decade ago. But widely recognized or not, it is there nonetheless. More sophisticated indicators, unfortunately, tell the same story. Readers are aware it is our practice mathematically to COmpute and identify trends on the major averages. It is now quite evident that the uptrend which existed from May 26 to the end of April, carrying the Dow ahead some 50, has now been decisively violated. Now, of course, it is quite possible that such a violation Signifies nothing more than the fact that the advance will continue — albeit at a slower rate, Such has been the outcome of like trend violations on a number of previous occa- siQns,,–Xet,violat1ons,oithisature.hayealso,ilL.the.pa!t,beenam9ngtheearliestharbingers of major difficulty developing in the stock market. As such, we are inclined to treat them with respect. And yet, despite all this, we find ourselves unable to suppress the feeling that the market is acting a great deal better just beneath the surface than is apparent at first glance. Market breadth, of course, has deteriorated since April, but breadth figures are a great deal better than One would expect them to be at the termination of an upswing. Public skepticism, as odd lot sales rise in the face of each decline, is evident, A healthy number of Sizeable blocks continue to trade at upside price concessions. And, most importantly, the amount of distribution that has taken place in individual stock patterns remains surprisingly small cOnsidering the action of the averages. The market, in summary, gives us the impression of looking for an excuse to go up. We are reminded, in a way, of the Spring of 1968 when the market had displayed an even more prctracted (6 months) period of dullness. During the period, so-called Peace stocks tended to show out- standing technical action. And when the event to light the fuse, the announcement that President Johnson would not seek reelection, occurred, the resultant April Fools Day rally was truly dynamic. Looking at individual technical patterns, the operative catchilhrase at the moment appears not to be Peace but, Industrial Recovery. The stocks showing the best current technical action tend to be heavy-industry, cyclical issues, together with a sprinkling of classic growth stocks, whose,growth rate has temporarily slowed and can be expected to improve under conditions of a – – cyclical'recovery.-It' is 'hard' to 'imagine'the nature-of a' single event com'parable;to the' Johnson– announcement which could touch off a rally in stocks of this ilk, but this, of course, is what lends such events their surprise quality. Perhaps the most convincing argument for cautious optimism at this stage is that it isn't likely to cost too much. Let us assume the conventional interpretation of the head-and-shouldens top mentioned above. The worst possible downside objective if the top is violated (and the violation is real — false breakouts from widely-recognized formations are a notoriously common occurrence) is nOw the 860-850 level, a decline of a bit more than 5 from current prices. This would hardly constitute Armageddon. Moreover, there are enough stocks around where little distribution appears in eVidence, that we find no want of areas where we are comfortable about having money invested. The bull market has unquestionably been down for the past couple of months, but we suspect it may be a bit early to start counting it out. Dow-Jones Industrial (1100 a.m.) 901.43 ANTHONYW. TAB ELL S&P (1100 a.m.) 100.10 !,WTmn DELAFIELD, HARVEY, TAB ELL No statement or expression of opinion or any other matter he'e'n con'alned IS, or .s to be deemed to be, d,rely or II'Idnectly, on offer or the sol,c,lollon of on offer to buy or sell any secunty referred to or ment.oned The matter .5 presented merely for tre convellenc of Ihe subscrober While -Ne believe Ihe SOlJrces of our .nformo lion to be reliable, we ,n no way represen' or guarantee the o'Curocy thereof nor of the statements rTude herem Any action to be loken by Ihe subcnber should be based on hiS own inVestigation and Informal Ion Janney Montgomery Scoll, Inc, os a cor;orc!lon, ond Its o'fleers cr employees, may now have, Of may later toke, positions or trades In respect to any secvrilies mentioned In tts or O'ly future Issue, and such 005,t,0'1 may be d,ffe'ent fro'll any views now or hereafter expressed In Ih,s or any other IHue Janney Montgomery Scot, Inc, which 15 registered With the SEC as C'1 mvestment ocvlsor, may gIVe adVice to lIS Investment adVISOry and othel customers Independently of any statemenls mode In thiS r In anv o'her Issue Further In'ormO'ICI' on any security mentIOned herein IS aVailable on requesl