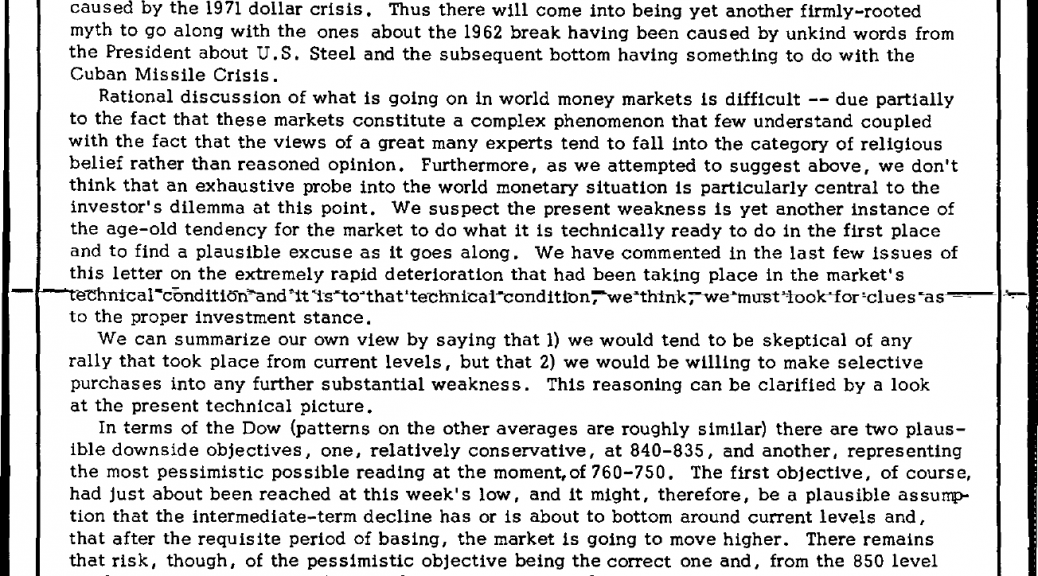 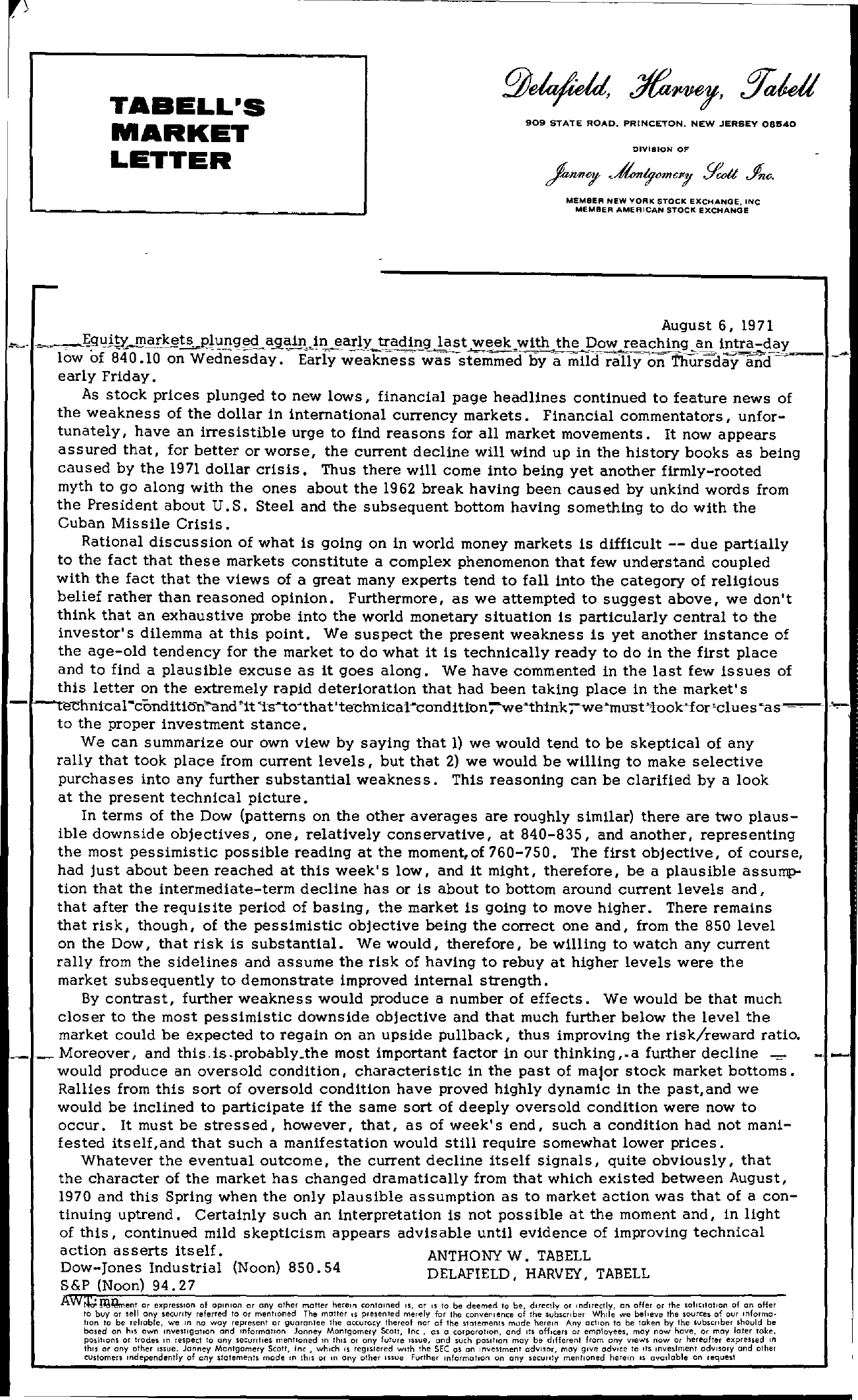 TABELL'S MARKET LETTER 909 STATE ROAD. PRINCETON, NEW JERSEY 08540 DIVISION OF MEM8EFI NEW YORK STOCK EXCHANGE, INC MEMBER AMERICAN STOCK EXCHANGE August 6, 1971 – Egui! mrkej)!\lEgLa9iJnearlyadil!.teekwith th 120w.reaching '!.Il. i!l!rad;cay-'I low of 840.10 on Wednesday. Early weakness was stemmed by a mild rally on Thursday -and early Friday. As stock prices plunged to new lows, financial page headlines continued to feature news of the weakness of the dollar in international currency markets. Financial commentators, unfortunately, have an irresistible urge to find reasons for all market movements. It now appears assured that, for better or worse, the current decline will wind up in the history books as being caused by the 1971 dollar crisis. Thus there will come into being yet another firmly-rooted myth to go along with the ones about the 1962 break having been caused by unkind words from the President about U. S. Steel and the subsequent bottom having something to do with the Cuban Missile Crisis. Rational discussion of what is going on in world money markets is difficult — due partially to the fact that these markets constitute a complex phenomenon that few understand coupled with the fact that the views of a great many experts tend to fall into the category of religious belief rather than reasoned opinion. Furthermore, as we attempted to suggest above, we don't think that an exhaustive probe into the world monetary situation is particularly central to the investor's dilemma at this point. We suspect the present weakness is yet another instance of the age-old tendency for the market to do what it is technically ready to do in the first place and to find a plausible excuse as it goes along. We have commented in the last few issues of this letter on the extremely rapid deterioration that had been taking place in the market's ,J.—re—-'i1hntcalcondition'and 'it istothat 'teChniCalcondition;we'thtnx;-wemustluokfor 'clues a s'I to the proper investment stance. We can summarize our own view by saying that 1) we would tend to be skeptical of any rally that took place from current levels, but that 2) we would be willing to make selective purchases into any further substantial weakness. This reasoning can be clarified by a look at the present technical picture. In terms of the Dow (patterns on the other averages are roughly similar) there are two plausible downside objectives, one, relatively conservative, at 840-835, and another, representing the most pessimistic possible reading at the moment,of 760-750. The first objective, of course, had just about been reached at this week's low, and it might, therefore, be a plausible assump- tion that the intermediate-term decline has or is about to bottom around current levels and, that after the requisite period of basing, the market is gOing to move higher. There remains that risk, though, of the pessimistic objective being the correct one and, from the 850 level on the Dow, that risk is substantial. We would, therefore, be willing to watch any current rally from the sidelines and assume the risk of having to rebuy at higher levels were the market subsequently to demonstrate improved internal strength. By contrast, further weakness would produce a number of effects. We would be that much closer to the most pessimistic downside objective and that much further below the level the market could be expected to regain on an upside pullback, thus improving the risk/reward ratio. — Moreover, and this, is probably.the most important factor in our thinking ,.a further decline … would produce an oversold condition, characteristic in the past of major stock market bottoms. Rallies from this sort of oversold condition have proved highly dynamic in the past,and we would be inclined to participate if the same sort of deeply oversold condition were now to occur. It must be stressed, however, that, as of week's end, such a condition had not mani- fested itself,and that such a manifestation would still require somewhat lower prices. Whatever the eventual outcome, the current decline itself signals, quite obviously, that the character of the market has changed dramatically from that which existed between August, 1970 and this Spring when the only plausible assumption as to market action was that of a con- tinuing uptrend. Certainly such an interpretation is not possible at the moment and, in light of this, continued mild skepticism appears advisable until eVidence of improving technical action asserts itself. DOW-Jones Industrial (Noon) 850.54 SSP (Noon) 94.27 ANTHONY W. TABELL DELAFIELD, HARVEY. TABELL AW;C;mQrnent or express!on of opinion or any other matter here'n contolned IS, or IS to be deemed 10 be, directly or ,ndlrectly, on offer or the SOl,Cllollon of on offer to buy or sell cny security referred 10 or mentioned The molter IS presented merely for Ike convellence of the subscriber While we believe the sources of our Informotlon to be reiroble, we In no way represent or guarantee the accuracy thereof nor of the statements mude herein Any action to be token by the subSCriber should be based on hiS own Investigation and Informallon Jonney Montgomery Seal!, Inc, as a corporation, and Its officers or employees, may now have, or may later toke, poslllonS Of trades In respect 10 any securities mentioned In thiS or any future Issue, and such POSition may be ddferent hom any views now or hereafter expressed In thiS or any other Issue Janney Montgomery Scott, Inc, which IS registered WITh The SEC as on InvestmenT adVisor, may give adVice to Its investment adVisory end other customers Independently of any statements mode In thiS or In any other Issue Further Informohon on any securoty mentioned herein IS aVailable on requet