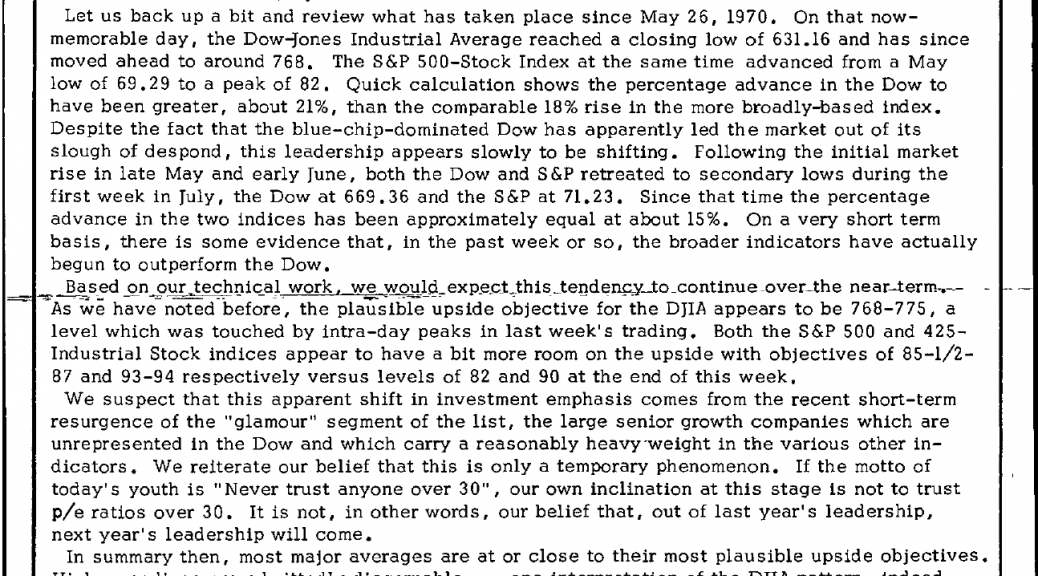 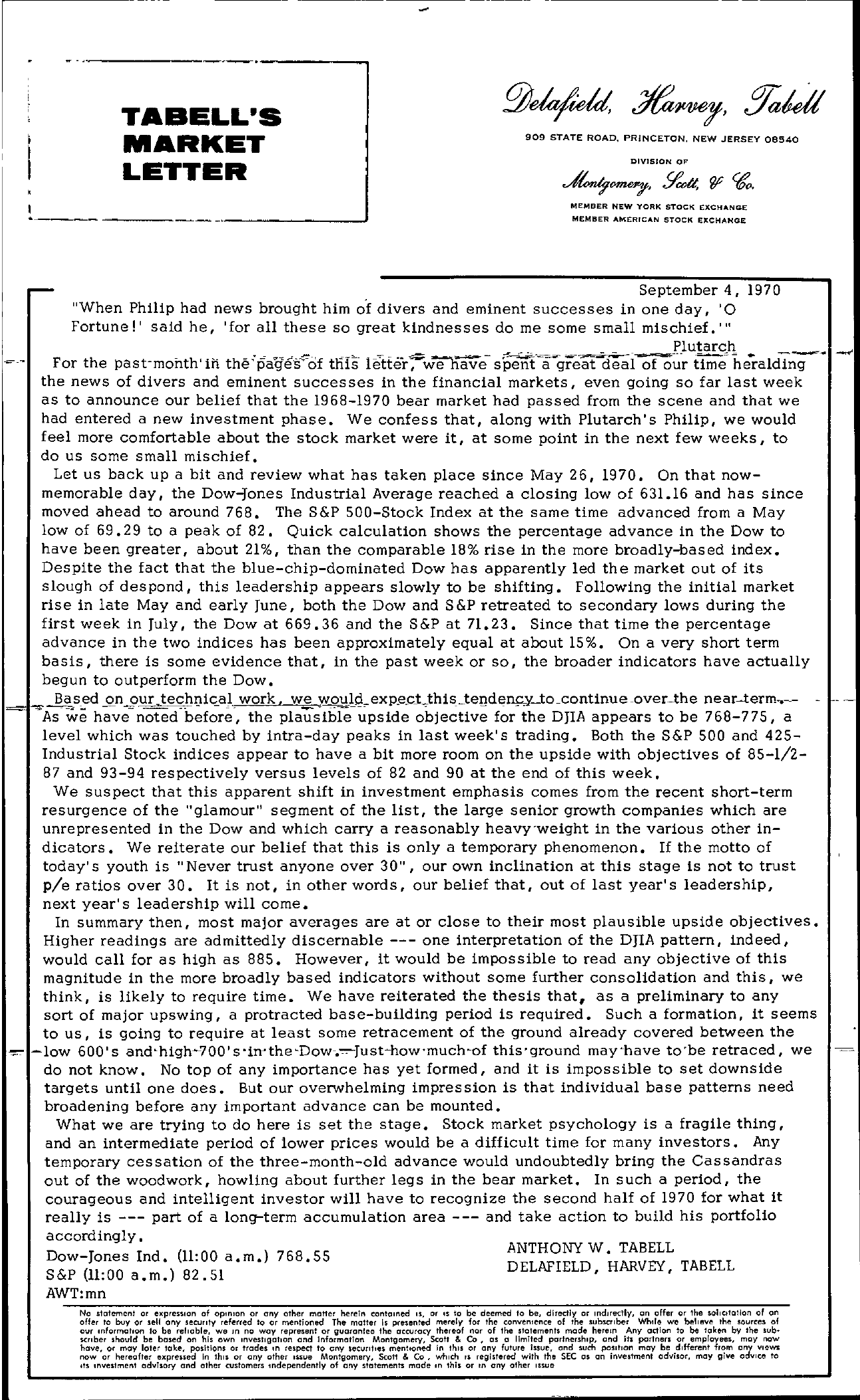 ———– ———— '——-.—–, ,.— TABELL'S MARKET LETTER 909 STATE ROAD, PRINCETON, NEW JERSEY 08540 DIVISION OF MEMBER NEW YORK STOCK EXCHANGE MEMBER AMERICAN STOCK EXCHANGE September 4, 1970 When Philip had news brought him o'f divers and eminent successes in one day, '0 Fortune!' said he, 'for all these so great kindnesses do me some small mischief. ' For the past-month' iii tnfs letter;-wenave- Plutarch -deal of t-ime' the news of divers and eminent successes in the financial markets, even going so far last week as to announce our belief that the 1968-1970 bear market had passed from the scene and that we had entered a new investment phase. We confess that, along with Plutarch's Philip, we would feel more comfortable about the stock market were it, at some point in the next few weeks, to do us some small mischief. Let us back up a bit and review what has taken place since May 26, 1970. On that nowmemorable day, the Dow-fones Industrial Average reached a closing low of 631.16 and has since moved ahead to around 768. The S&P 500-Stock Index at the same time advanced from a May low of 69.29 to a peak of 82. Quick calculation shows the percentage advance in the Dow to have been greater, about 21, than the comparable 18 rise in the more broadly-based index. Despite the fact that the blue-chip-dominated Dow has apparently led the market out of its slough of des pond, this leadership appears slowly to be shifting. Following the initial market rise in late May and early June, both the Dow and S &P retreated to secondary lows during the first week in July, the Dow at 669.36 and the S&P at 71.23. Since that time the percentage advance in the two indices has been approximately equal at about 15. On a very short term basis, there is some evidence that, in the past week or so, the broader indicators have actually begun to outperform the Dow. Based on our technical work, we wouldexp,ecCthistendency-1ocontinueoverthe near-term-.– -Aswe hav; the tipside for- the DJIA appears to be 768-775, a level which was touched by intra-day peaks in last week's trading. Both the S&P 500 and 425Industrial Stock indices appear to have a bit more room on the upside with objectives of 85-1/2- 87 and 93-94 respectively versus levels of 82 and 90 at the end of this week. We suspect that this apparent shift in investment emphasis comes from the recent short-term resurgence of the glamour segment of the list, the large senior growth companies which are unrepresented in the Dow and which carry a reasonably heavy-weight in the various other indicators. We reiterate our belief that this is only a temporary phenomenon. If the motto of today's youth is Never trust anyone over 30, our own inclination at this stage is not to trust pie ratios over 30. It is not, in other words, our belief that, out of last year's leadership, next year's leadership will come. In summary then, most major averages are at or close to their most plausible upside objectives. Higher readings are admittedly discernable — one interpretation of the DJIA pattern, indeed, would call for as high as 885. However, it would be impossible to read any objective of this magnitude in the more broadly based indicators without some further consolidation and this, we think, is likely to require time. We have reiterated the thesis that, as a preliminary to any sort of major upswing, a protracted base-building period is required. Such a formation, it seems to us, is going to require at least some retracement of the ground already covered between the -low 600's this'ground may-have tO'be retraced, we do not know. No top of any importance has yet formed, and it is impossible to set downSide targets until one does. But our overwhelming impreSSion is that individual base patterns need broadening before any important advance can be mounted. What we are trying to do here is set the stage. Stock market psychology is a fragile thing, and an intermediate period of lower prices would be a difficult time for many investors. Any temporary cessation of the three-month-old advance would undoubtedly bring the Cassandras out of the woodwork, howling about further legs in the bear market. In such a period, the courageous and intelligent investor will have to recognize the second half of 1970 for what it really is — part of a long-term accumulation area — and take action to build his portfolio accordingly. Dow-Jones Ind. (1100 a.m.) 768.55 S&P (1100 a.m.) 82.51 AWTmn ANTHONY W. TABELL DELAFIELD, HARVEY, TAB ELL No statement or expression of opinion or any other maHer herein contolned IS, or 1 to be deemed to be, directly or indirectly, on offer or the soliCitation of on offer to buy or sell ony seomly referred to or mentioned The matter Is presented merely for the convenience of the uhs.crIOOr wrnre we believe the sources of our Informollon 10 be relloble, we In no WJY represent or guoran!ee the accuracy thereof nor of the statements mode herein Any action to be token by the subKflber should be based an his own mvesllgahon ond Informotion Montgomery, Scott & Co, as 0 limited partnership, ond Its portners or employees, moy now have, or may loter toke, positions or trades In respect to any securities menlloned In thiS or any future issue, and such POSition may be different from any views now or hereafter exprened In thiS or ony other lSue Montgomery, Scott & Co. which IS registered with the SEC as on investment advisor, may give adVice to Its Investment odvisory and other customers mdependently of any statements mode In this or In ony other Issue