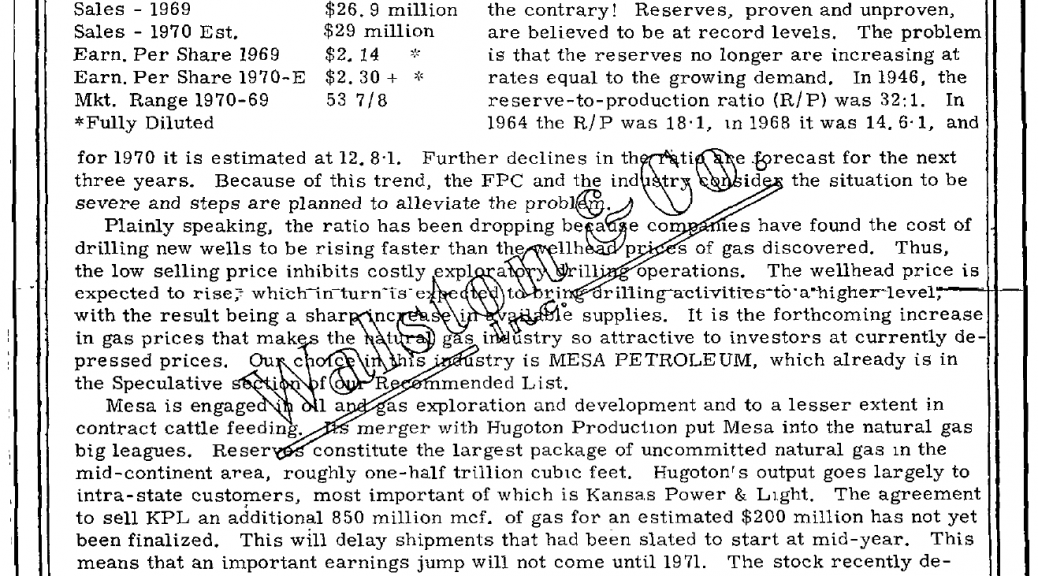 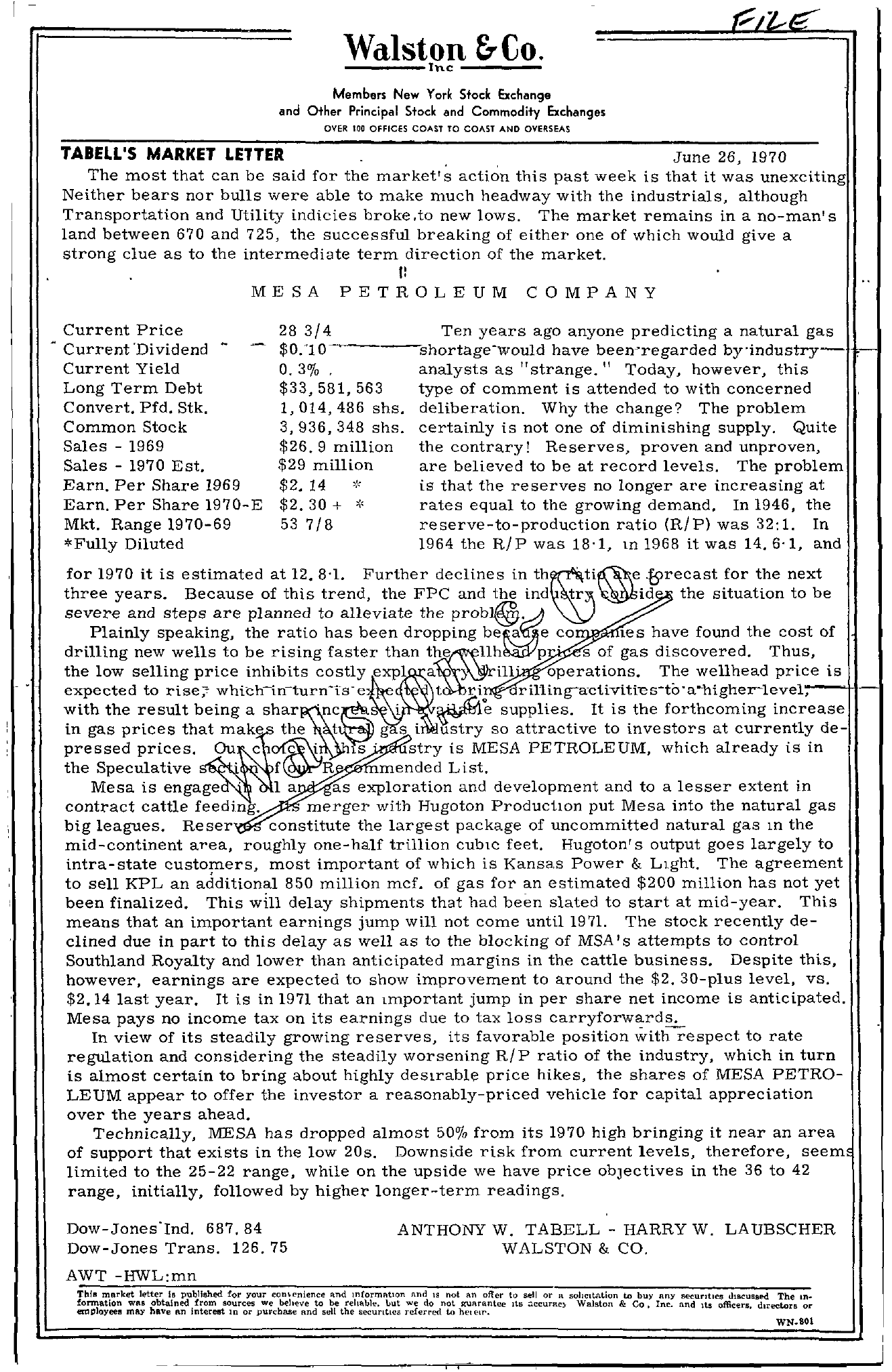 I- Walston &Co. —–Inc —– Members New York Stock Exchange and Other Principal Stock and Commodity Exchanges OVER 100 OFFICES COAST TO COAST AND OVERSEAS TABELl'S MARKET lETTER June 26, 1970 The most that can be said for the market' action this past week is that it was unexciting Neither bears nor bulls were able to make much headway with the industrials, although Transportation and Utility indicies broke .to new lows. The market remains in a no-man' s land between 670 and 725, the successful breaking of either one of which would give a strong clue as to the intermediate term direction of the market. Ii MESA PETROLEUM COMPANY Current Price Current 'Dividend Current Yield Long Term Debt Convert. Pfd. Stk. Common Stock Sales – 1969 Sales – 1970 Est. Earn. Per Share 1969 Earn. Per Share 1970-E Mkt. Range 1970-69 Fully Diluted 28314 Ten years ago anyone predicting a natural gas 010—-shortage-would have been'regarded bY'industry- 0.3 . analysts as strange Today, however, this 33,581,563 type of comment is attended to with concerned 1,014,486 shs. deliberation. Why the change The problem 3,936,348 shs. certainly is not one of diminishing supply. Quite 26.9 million the contrary! Reserves, proven and unproven, 29 million 2. 14 are believed to be at record levels. The problem is that the reserves no longer are increasing at 2. 30 rates equal to the growing demand. In 1946, the 53 7/8 reserve-to-production ratio (Rip) was 321. In 1964 the RIP was 18'1, tn 1968 it was 14.6'1, and for 1970 it is estimated at 12. 8'1. Further declines in three years. Because of this trend, the FPC and the ind tr -t9recast for the next the situation to be severe and steps are planned to alleviate the probl–..-1 Plainly speaking, the ratio has been dropping co les have found the cost of drilling new wells to be rising faster than s of gas discovered. Thus, the low p!,ice expected to rlse,' whlch 1n turn IS e a J. ill' .. perati.ons !h t 1'1 rlllmg-acttvltres to price is with the result being a i supplies. It is the forthcoming increase in gas prices the t g s i ustry so attractive to investors at currently de- pressed prices. au c ar9i\i; s stry is MESA PETROLEUM, which already is in the Speculative . mended List. Mesa is engage' 1 a as exploration and development and to a lesser extent in contract cattle feeding. merger with Hugoton ProductIOn put Mesa into the natural gas big leagues. Reser constitute the largest package of uncommitted natural gas m the mid-continent area, roughly one-half trillion CUblC feet. Hugoton's output goes largely to intra-state customers, most important of which is Kansas Power & Llght. The agreement to sell KPL an additional 850 million mcf. of gas for an estimated 200 million has not yet been finalized. This will delay shipments that had been slated to start at mid-year. This means that an important earnings jump will not come untill971. The stock recently de- clined due in part to this delay as well as to the blocking of MSA's attempts to control Southland Royalty and lower than anticipated margins in the cattle business. Despite this, however, earnings are expected to show improvement to around the 2. 30-plus level, vs. 2.14 last year. It is in 1971 that an Important jump in per share net income is anticipated. Mesa pays no income tax on its earnings due to tax loss In view of its steadily growing reserves, its favorable position with respect to rate regulation and conSidering the steadily worsening RIP ratio of the industry, which in turn is almost certain to bring about highly deslrable price hikes, the shares of MESA PETRO- LEUM appear to offer the investor a reasonably-priced vehicle for capital appreciation over the years ahead. Technically, MESA has dropped almost 50 from its 1970 high bringing it near an area of support that exists in the low 20s. Downside risk from current levels, therefore, seem limited to the 25-22 range, while on the upside we have price obJectives in the 36 to 42 range, initially, followed by higher longer-term readings. Dow-JonesInd. 687.84 Dow-Jones Trans. 126.75 ANTHONY W. TABELL – HARRY W. LAUBSCHER WALSTON & CO. AWT -HWLmn Thill market letter Is published for your and mformAtion nnd IS not an ofter to sell or a sohcltntion to buy IIny securities lhscussed The an. formation was obtained from sources we beheve to be rehable. but we do not g\lRranlee Its ;J,ccurRC Walston & Co. Inc. and lts officers, dlrectors or employee!'! may haVe an interest In or JJurchase and sell the securities referred to helen'. WN.801