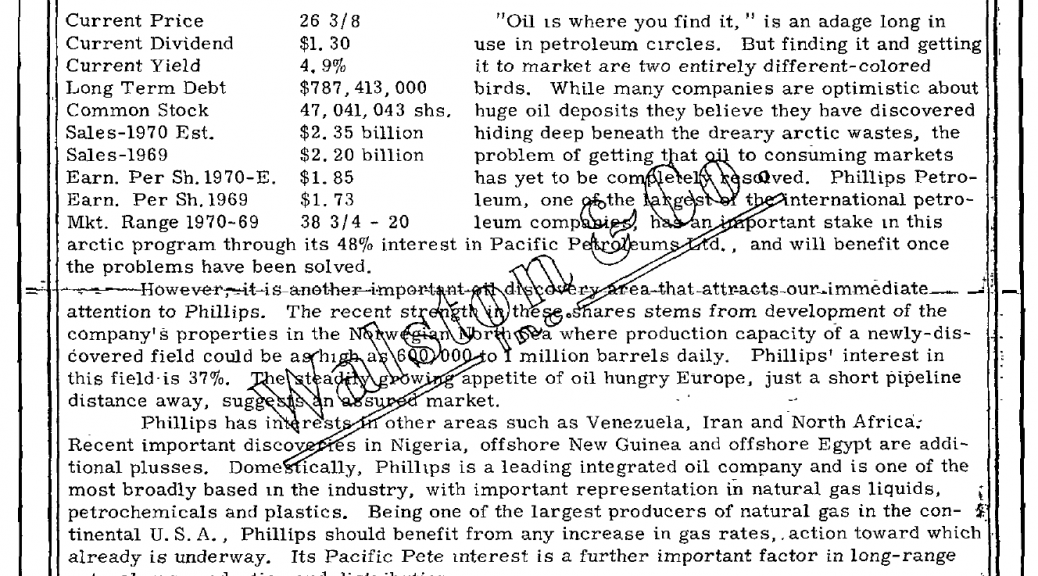 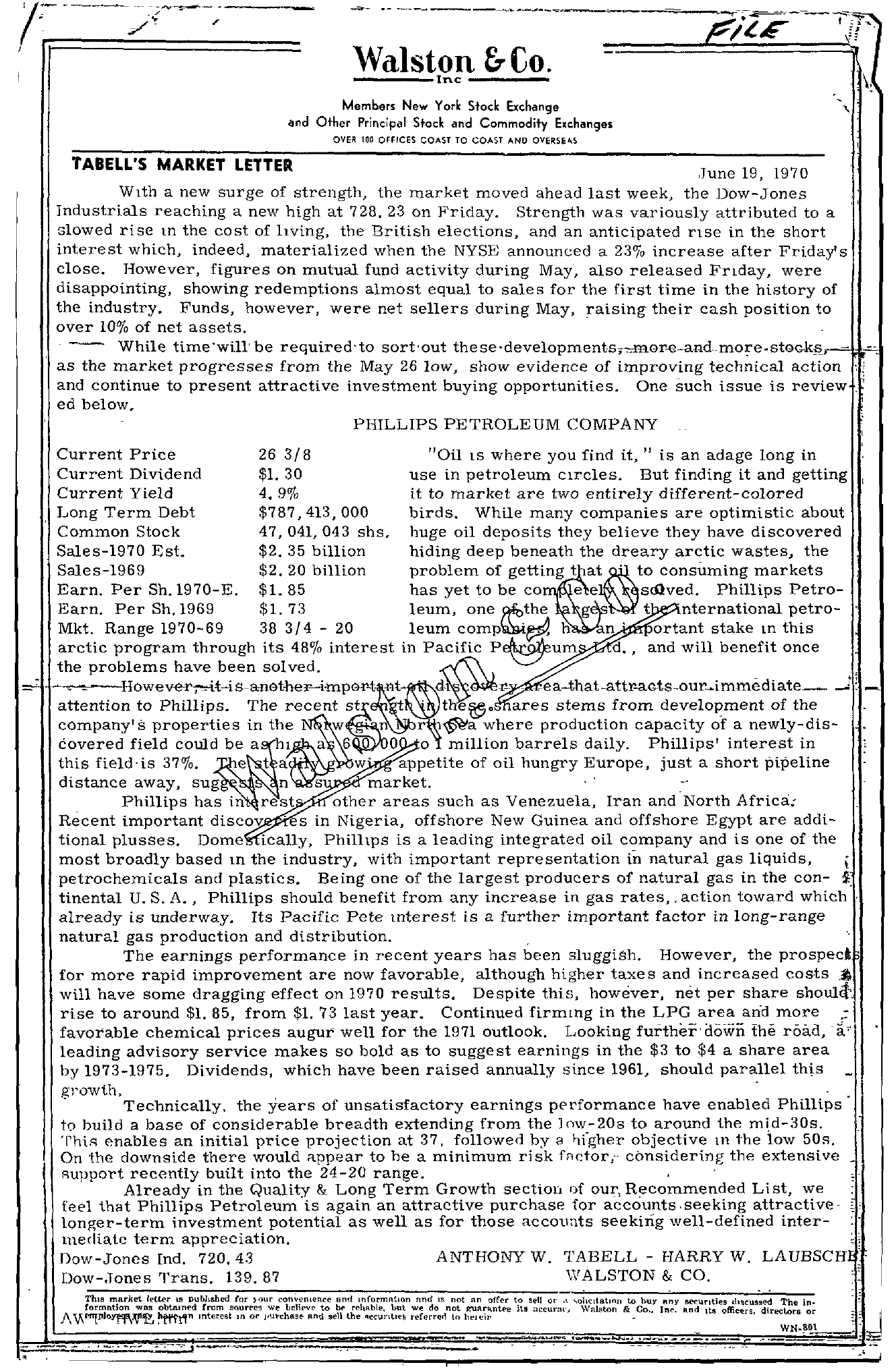 -' ….. /, /.; ..,….0;0- .. -………….. Walston &- Co. —–lnc —– ,-,,;-..;;— '1' \, Members New Yor' Stock Exchange and Other Principal Stock and Commodity ElChanges OVER 100 OFFICES COAST TO COAST AND OVERSEA.S TABElL'S MARKET LETTER June 19, 1970 W1th a new surge of strength, the market moved ahead last week, the Dow-Jones Industrials reaching a new high at 728.23 on Friday. Strength was variously attributed to a slowed rise In the cost of hving, the British elections, and an anticipated nse in the short interest which, indeed, materialized when the NYSE annoumed a 230/0 increase after Friday's close. However, figures on mutual fund activity during May, also released Fnday, were disappointing, showing redemptions almost equal to sales for the first time in the history of the industry. Funds, however, were net sellers during May, raising their cash position to over 10 of net assets . . – While time'will' be required'to sort'out thesedevelopmentsffior-e-and,.more.stoe-k., – as the market progresses from the May 26 low, show evidence of improving technical action , and continue to present attractive investment buying opportunities. One such issue is review i ed below. PHILLIPS PETROLEUM COMPANY Current Price 26 3/8 Oil 1S where you find it, is an adage long in Current Dividend 1. 30 use in petroleum c1rcles. But finding it and getting I Current Yield 4.9 it to market are two entirely different-colored Long Term Debt 787,413,000 birds. While many companies are optimistic about Common Stock 47,041,043 shs. huge oil deposits they believe they have discovered Sales-1970 Est. 2. 35 billion hiding deep beneath the dreary arctic wastes, the Sales-1969 2.20 billion problem of getting t consuming markets Earn. Per Sh.1970-E. 1. 85 has yet to be co e e salved. Phillips Petro- Earn. Per Sh.1969 1. 73 leum, one g t 'nternational petro- Mkt. Range 1970-69 38 3/4 – 20 leum arctic program through its 48 interest in Pacific 11 n' ortant stake In this a., and will benefit once the problems have been solved. I ' – -ea-that-attr-ae-ts-ourimmediate -,' attention to Phillips. The recent ares stems from development of the ' company's properties in the 'n where production capacity of a newly-dis- covered field could be a 6 0 0 o't million barrels daily. Phillips' interest in this field'is 37. e t a ' w' appetite of oil hungry Europe, just a short pipeline distance away, sug ns market. ' ' . Phillips has in rest other areas such as Venezuela, Iran and North Africa; Recent important discov 'es in Nigeria, offshore New Guinea and offshore Egypt are addi- tional plusses. Dome ically, Philltps is a leading integrated oil company and is one of the most broadly based In the industry, with important representation in natural gas liquids, ; petrochemicals and plastics. Being one of the largest producers of natural gas in the con- f;. tinental U. S. A., Phillips should benefit from any increase in gas rates,. action toward which, already is underway. Its Pacific Pete Interest is a further important factor in long-range natural gas production and distribution. The earnings performance in recent years has been sluggish. However, the prospect for more rapid improvement are now favorable, although higher taxes and increased costs will have some dragging effect on 1970 results. Despite this, however, mit per share shoulq', rise to around 1. 85, from 1. 73 last year. Continued firming in the LPG area arid more .. favorable chemical prices augur well for the 1971 outlook. Looking further'doWn the road,a' leading advisory service makes so bold as to suggest earnings in the 3 to 4 a share area by 1973-1975. Dividends, which have been raised annually since 1961, should parallel this gl'owi.h, . Technically, the years of unsatisfactory earnings performance have enabled Phillips to build a base of considerable breadth extending from the Jow-20s to around the mid-30s, 'I'h\s enables an initial price projection at 37, followed by a f,fgher objective 111 the low 50s. On the downside there would ppear to be a minimum risk fnctor;' conSidering the extensive Rupport recently built into the 24-20 range. Already in the Quality & Long Term Growth section of our, Recommended Li st, we feel that Phillips Petroleum is again an attractive purchase for accounts .seeking attractive . longer-term investment potential as well as for those accollnts seekirig well-defined inter- mediate term appreciation, Dow-Jones nd, 720.43 ANTHONY W. 'l'ABELL – HARRY W, LAUBSCH Dow-,Tones Trans. 139. 87 WALSTON & CO, ThiS market letter 19 published for )Qur convemence and mformAtlon nnd IS not an ofrer to sell or ,\ to huy Rny &e'C\lrlties Ih!!,cussed The In. A forrnlltion was hobfftlarmfTeld from mtere fl st OUfl'eS In or We believe t Jlulchll.Se fJ.nd o bl sell t rehabll'. but he qeCurLtlC we do not v,uarlmiE'e referrcrl to hl'ICil' its Walston & Co Inc. .R,nd Its offict!rs. directors or J -; , – …..roo .. ' .-…… ….., -. ..'