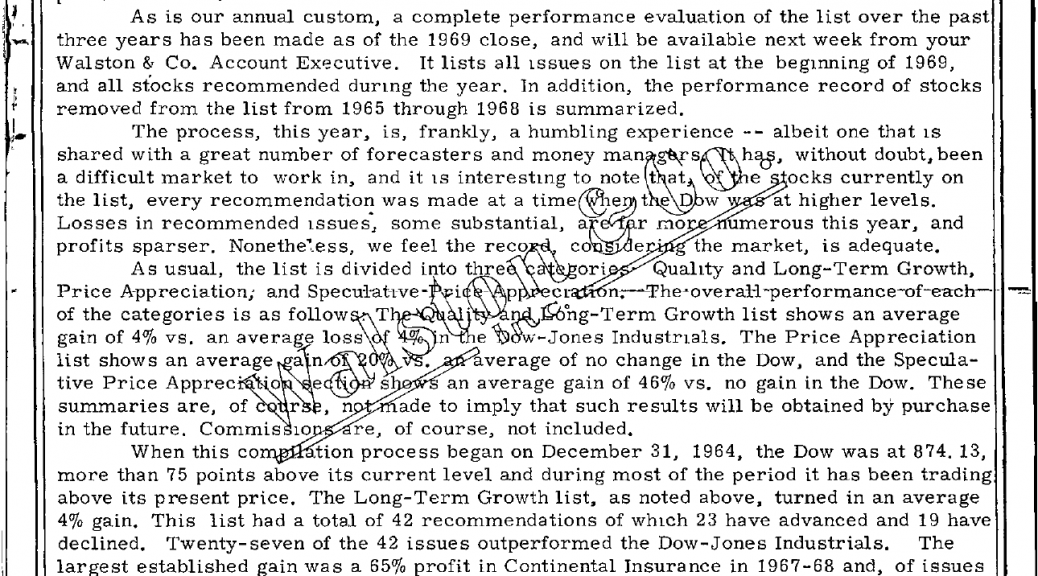 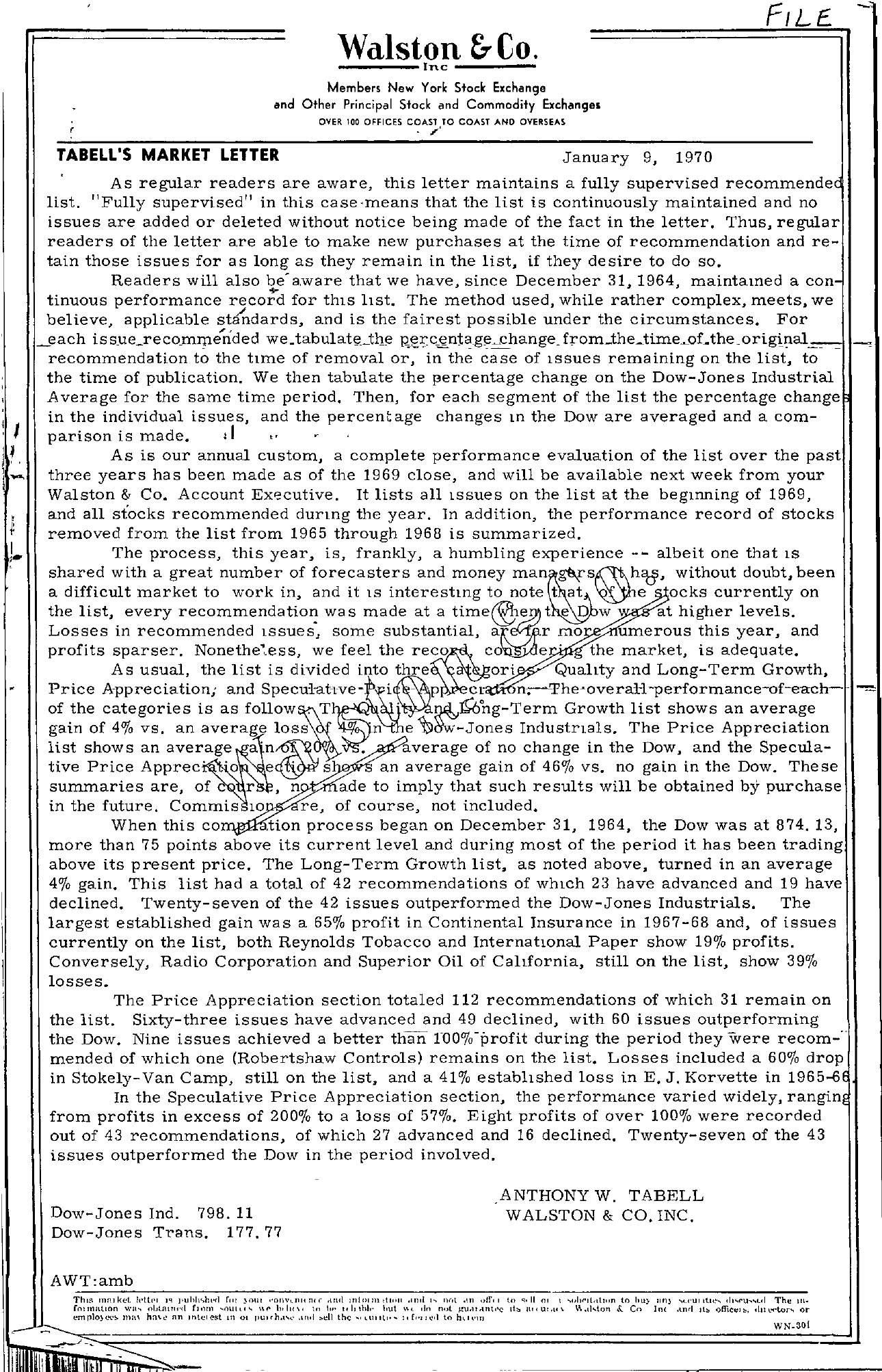 Walston &- Co, —-Inc —– Members New York Stock Exchange and Other Principal Stock and Commodity Exchange. OVER 100 OFFICES COAST TO COAST AND OVERSEAS -/ TABELL'S MARKET LETTER January 9, 1970 As regular readers are aware, this letter maintains a fully supervised list. Fully supervised in this casemeans that the list is continuously maintained and no issues are added or deleted without notice being made of the fact in the letter. Thus, regula readers of the letter are able to make new purchases at the time of recommendation and re- tain those issues for as long as they remain in the list, if they desire to do so. …Readers will also be aware that we have, since December 31, 1964, maintamed a tinuous performance record for thlS list. The method used, while rather complex, meets, we believe, applicable s,t./ndards, and is the fairest possible under the circumstances. For ach is suerecomrpended wetabulat,Uhe the. original recommendation to the hme of removal or, in the case of lssues remaining on the list, to the time of publication. We then tabulate the l'lercentage change on the Dow-Jones Industrial Average for the same time period. Then, for each segment of the list the percentage ;'''-1.115''1'1 in the individual issues, and the percentage changes m the Dow are averaged and a com- parison is made. ,I ,. As is our annual custom, a complete performance evaluation of the list over the pa three years has been made as of the 1969 close, and will be available next week from your Walston & Co. Account Ex,cutive. It lists all lssues on the list at the begmning of 1969, and all stocks recommended durmg the year. In addition, the performance record of stocks removed from the list from 1965 through 1968 is summarized. The process, this year, is, frankly, a humbling experience — albeit one that lS shared with a great number of forecasters and money without doubt, been a difficult market to work in, and it lS interestmg to note t at ocks currently on the list, every was made at a eDw at higher levels. Losses in recommended lssues, some substantial, mo umerous this year, and profits sparser. we feel the the market, is adequate. As usual, the list is divided into thre ori Quality and Long-Term Growth, Price AppreCiation; and Ct n-;—TheoveraH-perfo of the categories is as Growth list shows an average gain of 4 vs. an average loss n e '1Sl6'W-Jones Industrtals. The Price Appreciation list shows an average . average of no change in the Dow, and the Specula- tive Price Apprec' .0 s an average gain of 46 vs. no gain in the Dow. The se summaries are, of r ade to imply that such results will be obtained by purchase in the future. Commis 10 re, of course, not included. When this co tion process began on December 31, 1964, the Dow was at 874. 13, more than 75 points above its current level and during most of the period it has been above its present price. The Long-Term Growth list, as noted above, turned in an average 4 gain. This list had a total of 42 recommendations of whlch 23 have advanced and 19 have declined. Twenty-seven of the 42 issues outperformed the Dow-Jones Industrials, The largest established gain was a 65 profit in Continental Insurance in 1967-68 and, of issues currently on the list, both Reynolds Tobacco and InternatlOnal Paper show 19 profits. Conversely, Radio Corporation and Superior Oil of California, still on the list, show 39 losses. The Price Appreciation section totaled 112 recommendations of which 31 remain on the list. Sixty-three issues have advanced and 49 declined, with 60 issues outperforming the Dow. Nine issues achieved a better than 100-profit during the period they were recom-' mended of which one (Robertshaw Controls) remains on the list. Losses included a 60 drop in Stokely-Van Camp, still on the list, and a 41 established loss in E. J. Korvette in 196 In the Speculative Price Appreciation section, the performance varied widely, rangi from profits in excess of 200 to a loss of 57. Eight profits of over 100 were recorded out of 43 recommendations, of which 27 advanced and 16 declined. Twenty-seven of the 43 issues outperformed the Dow in the period involved. Dow-Jones Ind. 798. 11 Dow-Jones Trans. 177.77 ANTHONY W. TABELL WALSTON & CO. INC. AWTamb mnl kct !!'ttp, l'uhh..,h,d r,ll n, r '(ul mlo, m ,1111 .1Il.! h Il..-.t ,\11 ,,If,1 to III \ ..hIIlhn to hu IHI rOlmatmn WH .. I,tlll,'1 fl')Ul 0111 .. \\(' \,,1,.,. In \. ,.Ilhlt l,ut ,jn not )..!U,I,\lIt('(' It, UUI,II\ 8. Cn In ,md cmnlol'l.! Ill!l\ ha\t' an Intt.'le8t III 01 pUlrh,I',,' .lnd ell the … UII!( .. 1''ll'' to 11'111 dl .. The \IL ,hll..-tor or WN.301