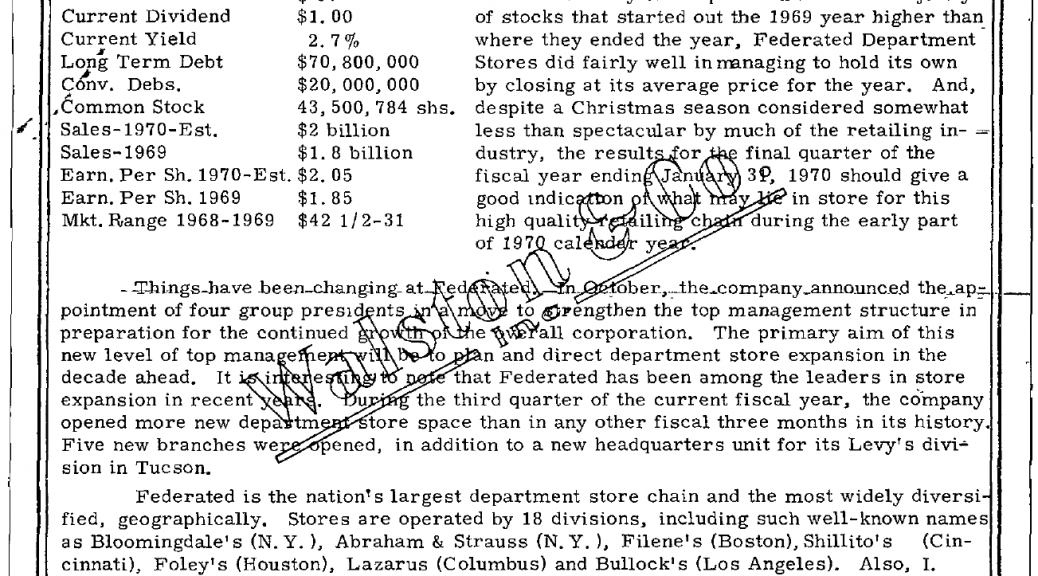 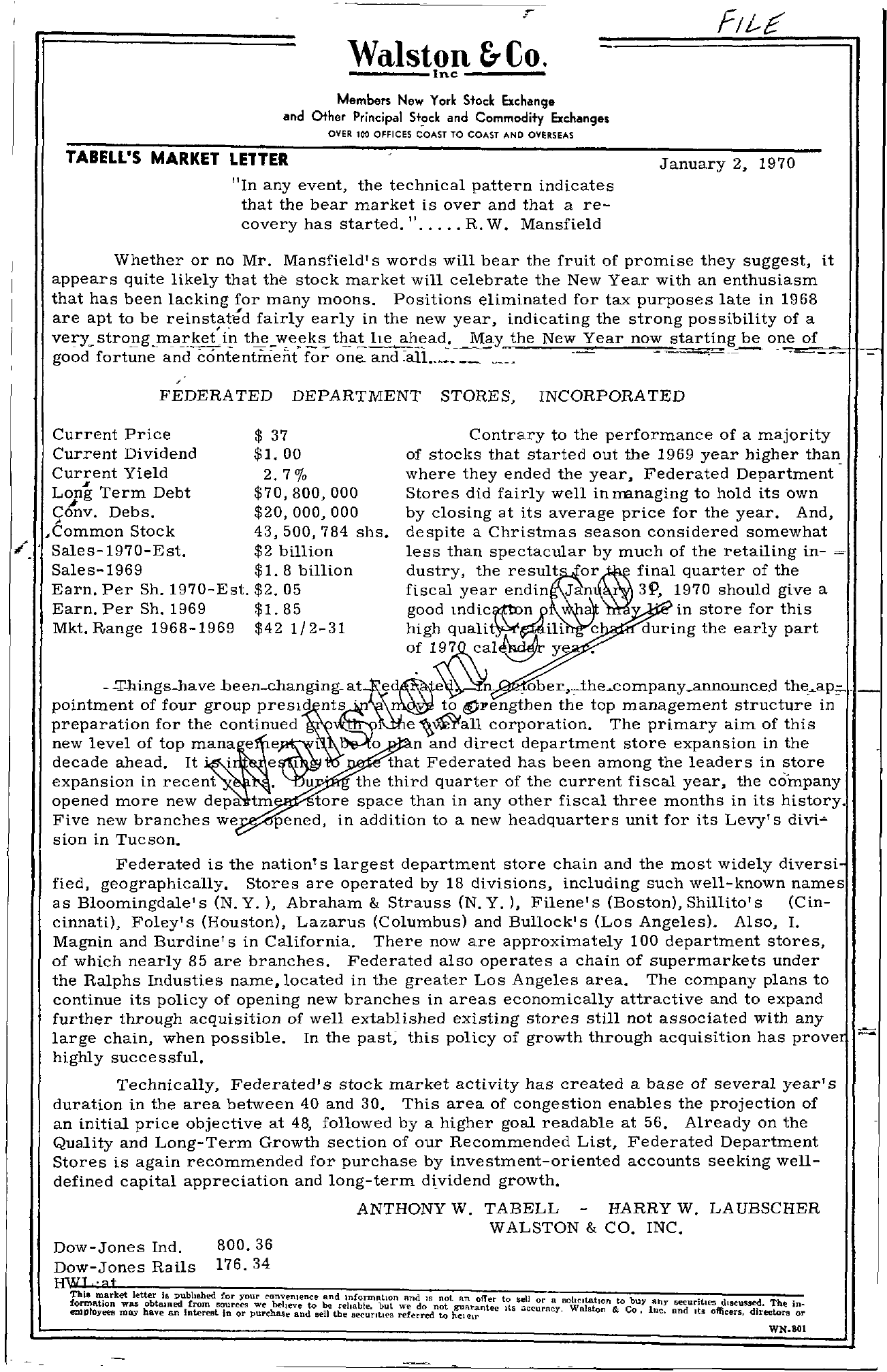 r Walston &Co. —–lnc —– Members New York Stock Exchange and Other Principal Stock and Commodity Exchanges OVER 100 OFFICES COAST TO COAST AND OVERSEAS TABELL'S MARKET LETTER In any event, the technical pattern indicates that the bear market is over and that a recovery has started. ….. R. W. Mansfield January 2, 1970 Whether or no Mr. Mansfield's words will bear the fruit of promise they suggest, it appears quite likely that the stock market will celebrate the New Year with an enthusiasm that has been lacking for many moons. Positions eliminated for tax purposes late in 1968 are apt to be reinstatei d fairly early in the new year, indicating the strong possibility of a very strong market'in the weeks that he ahead. May the New Year now starting be one of good- a-n-(fcontentrrent fo; and aii….–,, . – , FEDERATED DEPARTMENT STORES, INCORPORATED Current Price 37 Current Dividend 1. 00 Current Yield ;, Long Term Debt 2.7 70,800,000 C,. tnv. Debs. ,Common Stock 20,000,000 43,500,784 shs. Sales-1970-Est. 2 billion Sales-1969 1. 8 billion Earn. Per Sh. 1970-Est. 2. 05 Earn. Per Sh. 1969 1. 85 Mkt. Range 1968-1969 42 1/2-31 Contrary to the performance of a majority of stocks that started out the 1959 year higher where they ended the year, Federated Department Stores did fairly well in rmnaging to hold its own by closing at its average price for the year. And, 0idespite a Christmas season considered somewhat less than spectacular by much of the retailing in- dustry, the result final quarter of the fiscal year endin Jan 3P, 1970 should give a good .R a . in store for this high c during the early part . – .T-hings-have pOintment of four group tol'engthenthetopmanagementstructurein preparation for the continued e corporation. The primary aim of this new level of top e 0 n and direct department store expansion in the decade ahead. It i e I that Federated has been among the leaders in store expansion in recent . u the third quarter of the current fiscal year, the opened more new depa tm tore space than in any other fiscal three months in its history. Five new branches we pened, in addition to a new headquarters unit for its Levy's divi- sion in Tucson. Federated is the nation's largest department store chain and the most widely diversi fied, geographically Stores are operated by 18 divisions, including such well-known names as Bloomingdale's (N. Y.), Abraham & Strauss (N. Y.), Filene's (Boston), Shillito' s (CinCinnati), Foley's (Houston), Lazarus (Columbus) and Bullock's (Los Angeles). Also, 1. Magnin and Burdine's in California. There now are approximately 100 department stores, of which nearly 85 are branches. Federated also operates a chain of supermarkets under the Ralphs Industies name,located in the greater Los Angeles area. The company plans to continue its policy of opening new branches in areas economically attractive and to expand further through acquisition of well extablished existing stores still not associated with any large chain, when possible. In the past; this policy of growth through acquisition has prove highly successful. Technically, Federated's stock market activity has created a base of several year's duration in the area between 40 and 30. This area of congestion enables the projection of an initial price objective at 48, followed by a higher goal readable at 56. Already on the Qua.lity and Long-Term Growth section of our Recommended List, Federated Department Stores is again recommended for purchase by investment-oriented accounts seeking welldefined capital appreciation and long-term dividend growth. ANTHONY W. TABELL HARRY W. LAUBSCHER Dow-Jones Ind. 800.36 WALSTON & CO. INC. Dow-Jones Rails 176.34 HVjTT at Th,is l1l,;arket letter 18 puhhshed for your COnvenience Qnd mfoTmll.tlon Il.nd IS not An offer to sell or a So.itcltatlOn to buy all – t . .. Th . ormation was obtamed from BOurees we beheve to be reliable but we do not !flUU' t t W I to y securl les \.ILseu,.,..,.,.. I! In- emDloYee8 may have an interest in or PUFchase and sell the referred to ee I s accuracy. R s n & Co. 1ne. and Its officers. directors or WN.SOl