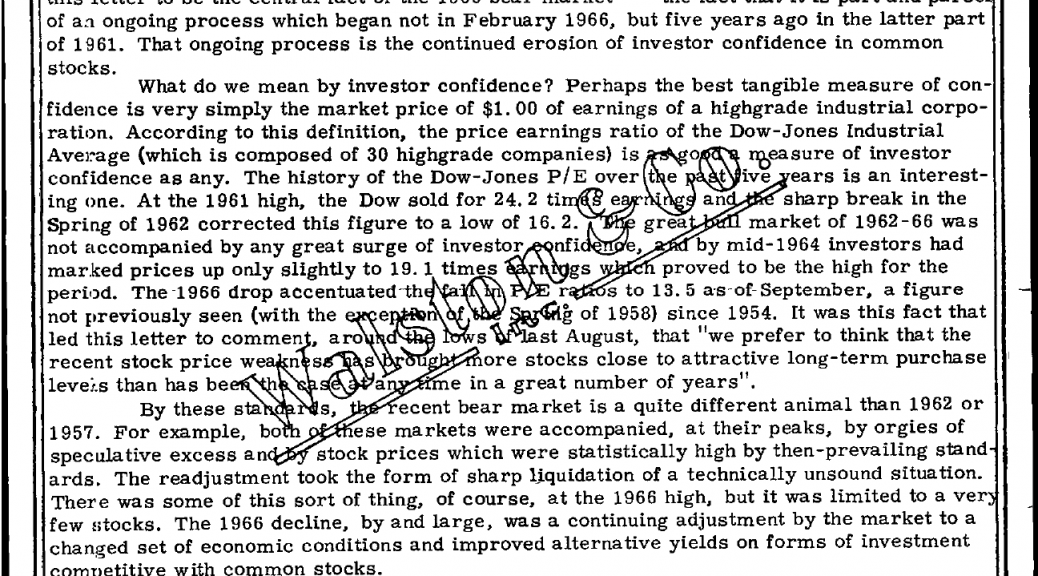 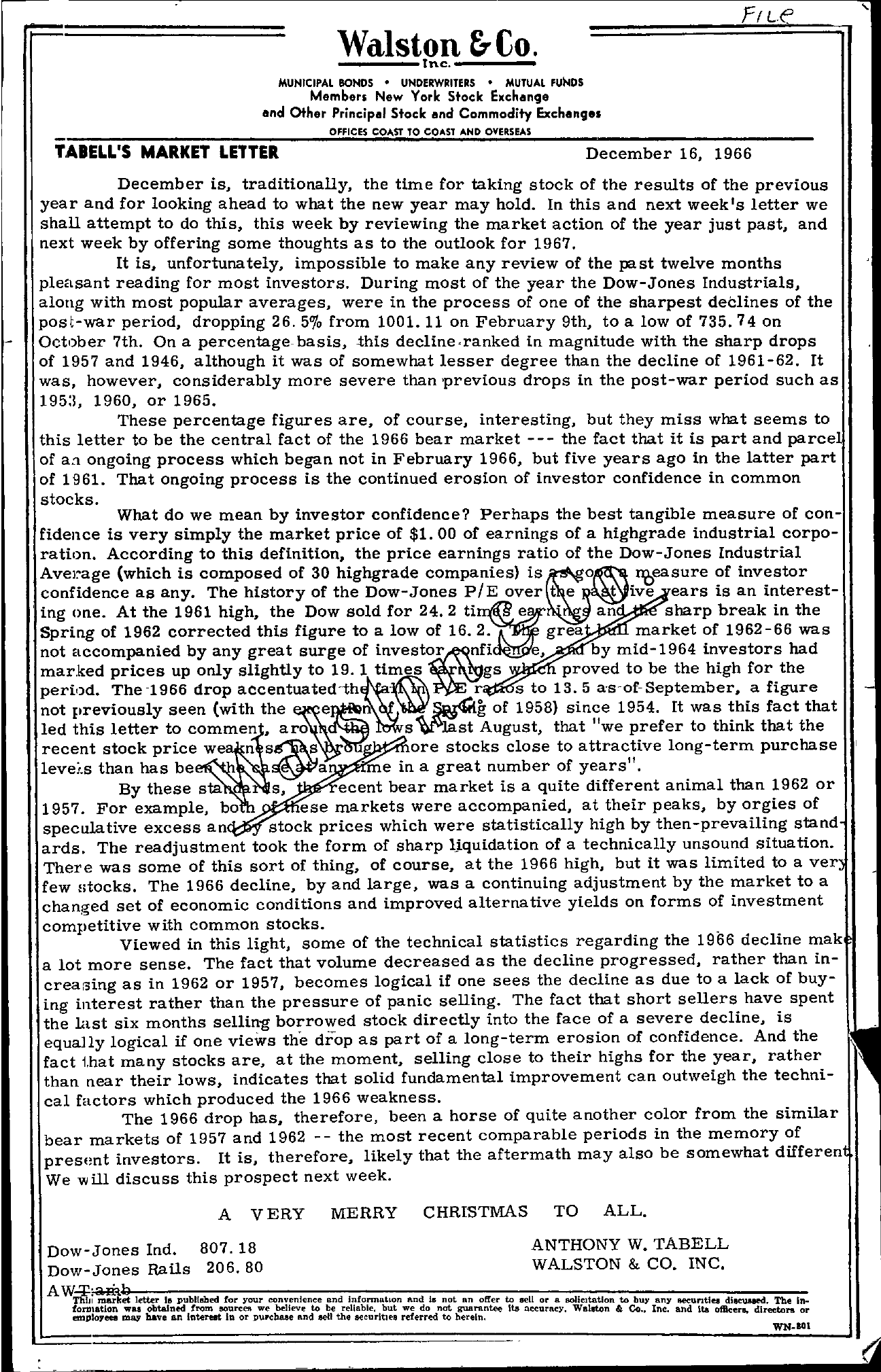 Walston &Co. -…;.,;.;;,..;;,,;; Inc. ;;…,;;……;;…;;., MUNICIPAL BONOS UNDERWRITERS MUTUAL FUNDS Members New York Stock Exchange and Other Principal Stock and Commodity Exchang OFFICES COA.ST TO COAST AND OVERSEAS T.ABELL'S MARKET LETTER December 16, 1966 December is, traditionally, the time for taking stock of the results of the previous year and for looking ahead to what the new year may hold. In this and next week's letter we shall attempt to do this, this week by reviewing the market action of the year just past, and next week by offering some thoughts as to the outlook for 1967. It is, unfortunately, impossible to make any review of the past twelve months pleasant reading for most investors. During most of the year the Dow-Jones Industrials, along with most popular averages, were in the process of one of the sharpest declines of the post-war period, dropping 26.50/0 from 1001. 11 on February 9th, to a low of 735.74 on October 7th. On a percentage- basis, this decline.ranked in magnitude with the sharp drops of 1957 and 1946, although it was of somewhat lesser degree than the decline of 1961-62. It was, however, considerably more severe than 'Previous drops in the post-war period such as 195l, 1960, or 1965. These percentage figures are, of course, interesting, but they miss what seems to this letter to be the central fact of the 1966 bear market — the fact that it is part and pa of aJ. ongoing process which began not in February 1966, but five years ago in the latter part of 1961. That ongOing process is the continued erosion of investor confidence in common stocks. What do we mean by investor confidence Perhaps the best tangible measure of on-I fidence is very simply the market price of 1. 00 of earnings of a highgrade industrial corpo- ration. According to this definition, the price earnings ratio of the Dow-Jones Industrial (which is composed of 30 highgrade companies) confidence as any. The history of the Dow-Jones pIE over t e noeasure of investor t ive ears is an interest- . ing one. At the 1961 high, the Dow sold for 24. 2 an sharp break in the Spring of 1962 corrected this figure to a low of 16.2. grea market of 1962-66 was not accompanied by any great surge of e, by mid-1964 investors had marked prices up only slightly to 19.1 times gs proved to be the high for the period. The-1966 drop r s to 13.5 a-s-of-September, a figure not previously seen (with the led this letter to commen , aro of 1958) since 1954. It was this fact that August, that we prefer to think that the recent stock price we n ore stocks close to attractive long-term purchase levei.s than has be me in a great number of years. By these sta ecent bear market is a quite different animal than 1962 or 1957. For example, bo ese markets were accompanied, at their peaks, by orgies of speculative excess an stock prices which were statistically high by then-prevailing sta ards. The readjustment took the form of sharp IJquidation of a technically unsound situation. There was some of this sort of thing, of course, at the 1966 high, but it was limited to a few stocks. The 1966 decline, by and large, was a continuing adjustment by the market to a changed set of economic conditions and improved alternative yields on forms of investment . competitive with common stocks. . Viewed in this light, some of the technical statistics regarding the 1966 decline a lot more sense. The fact that volume decreased as the decline progressed, rather than in- creasing as in 1962 or 1957, becomes logical if one sees the decline as due to a lack of buy- ing interest rather than the pressure of paniC selling. The fact that short sellers have spent the last six months sellin-g borrowed stock directly into the face of a severe decline, is equally logical if one views th'e drop as part of a long-term erosion of confidence. And the fact that many stocks are, at the moment, selling close to their highs for the year, rather than near their lows, indicates that solid fundamental improvement can outweigh the techni- cal factors which produced the 1966 weakness. The 1966 drop has, therefore, been a horse of quite another color from the similar bear markets of 1957 and 1962 — the most recent comparable periods in the memory of present investors. It is, therefore, likely that the aftermath may also be somewhat diffE!rEmt We will discuss this prospect next week. A V ERY MERRY CHRISTMAS TO ALL. Dow-Jones Ind. 807. 18 Dow-Jones Rails 206.80 ANTHONY W. TABELL WALSTON & CO. INC. Thill market letter III published for your convenience Bnd And 111 not an offer to sell or a soJleltation to buy any eeeuritiea dil5euaeed. The In- fomlAtlon was obtained from Munes we believe to be reliable, but we do not guartLntee Its lleeuraey, Walston & Co Inc. and ita oftleen. directors or employeea may have an Interest In or purchase and sell the seeuritles referred to herein. WN&Ol